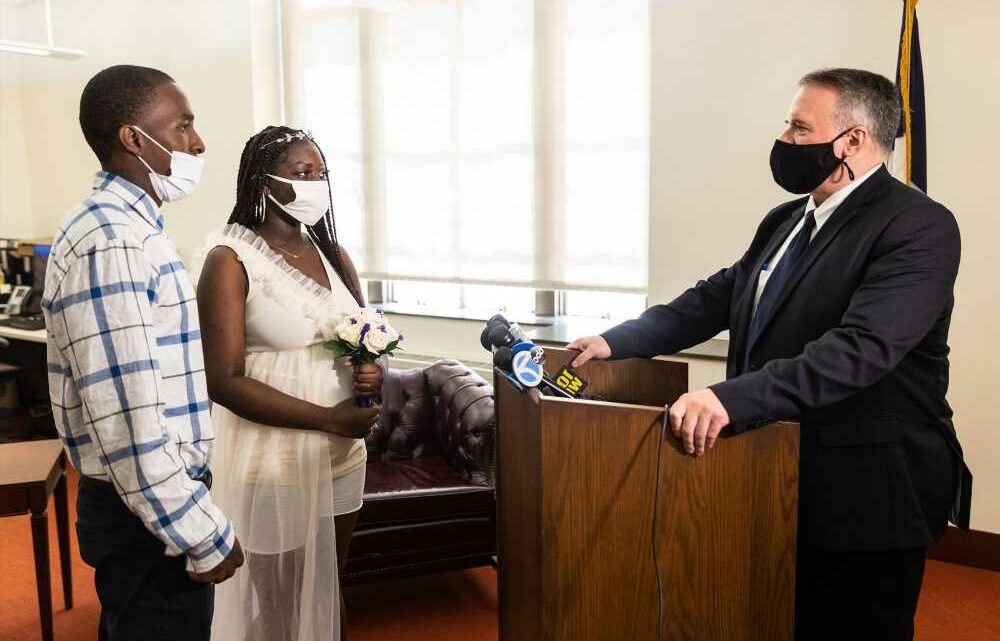 ‘I made a vow’: De Blasio announces reopening of NYC marriage bureau

The city marriage bureau opened just in time for these lovebirds.

Serenity Newson and her new hubby Tyreke Punch were among the first people to get hitched in a civil service Friday, as the bureau’s offices across the Big Apple finally came out of their 16-month COVID-19 shutdown and started performing wedding ceremonies again.

For the Queens couple, the big day doesn’t just include their nuptials at the bureau’s Lower Manhattan offices — the pregnant Newson was scheduled to deliver the couple’s baby at a Long Island hospital later in the day.

“I’m feeling excited and ready to start this new chapter. I’m ready to have the baby,” said Newson, 27, who works as a cook at a Chinese restaurant.

“I’m going in right after this, so it’s going to be a hectic day.”

Newson wore a white wedding dress and cradled her belly as city clerk Michael McSweeney performed the service at the Worth Street office.

The couple — who met while working at Shake Shack about a year ago — is expecting a boy, and was planning to head to Long Island Jewish Medical Center in New Hyde Park for their second big moment of the day.

“I’ve seen online that they open today, so I make sure to get an appointment,” said Newson. “But, you know, it was the same day I had to go in to be induced. But everything worked perfectly so now I can just run in after this.“

Punch, who works as a line cook, said the whole idea of getting married and having a baby in the same day was a bit overwhelming.

De Blasio announced on July 15 that the city’s marriage bureau, which has an office in all five boroughs, would reopen Monday to start booking appointments and that ceremonies would begin Friday.

The bureau closed on March 20, 2020, days ahead of the COVID-19 pandemic’s peak in New York City. The emergency shuttering prompted some couples to hurriedly get married.

Some of the couples who headed to Lower Manhattan Friday to obtain their marriage certificates had been waiting for a long time.

“We waited like two years, because of the pandemic,” Sae Feurtado, 32, told The Post, after hugging her husband and holding up her marriage certificate.

“I feel like I’m on cloud nine. I don’t know, words can’t describe how I feel,” she added, clutching her new hubby.

“In a weird way, it kind of makes me know it’s real, because when you are staying together in the house for an extra two years, it’s just brought us closer together so I’m happy,” said her husband, Richard Kissi.

The 34-year-old, who works as a photographer, said he felt “blessed” to be married at a time when an increasing amount of New Yorkers are inoculated and hospitals are no longer overwhelmed with coronavirus patients.

“We feel blessed. A lot of people didn’t make it past this pandemic,” he said. “It just makes us know how valuable life is.”

Fabian Gavilanes, a 22-year-old college student who met his husband Pablo Calderon, 31, in a supermarket in Queens about three years ago, said he had the couple’s wedding planned for a while.

“Everything changed because of the coronavirus, so we had to delay everything until now,” he said.

“We are going to have a drink now,” he added.

Audrea Estes-Williams, a customer service representative has been with her now-husband, Charles Williams, for ten years. On Monday morning, when she could first sign up for an appoint, she “got online bright and early and I got a date” for Friday.

“I’m over the moon. Finally, finally, it came and I’m just so happy,” Estes-Williams, 45, told The Post.

“I’m happy, and I’m blessed that today is the day,” said Charles Williams, 47.

“I’m now Mrs. Williams,” she beamed, as they left to take pictures with each other and enjoy their first meal together as a married couple.

The pair has flights booked to fly off to Las Vegas on Monday for their honeymoon.

As for Punch and Newson, since their special delivery later in the day will keep them from fully celebrating their union, they will at a later date hold a traditional wedding party and honeymoon.

“We are planning on having an actual wedding,” said Newson. “I want the whole experience, and have a major wedding, probably in a year or two.”