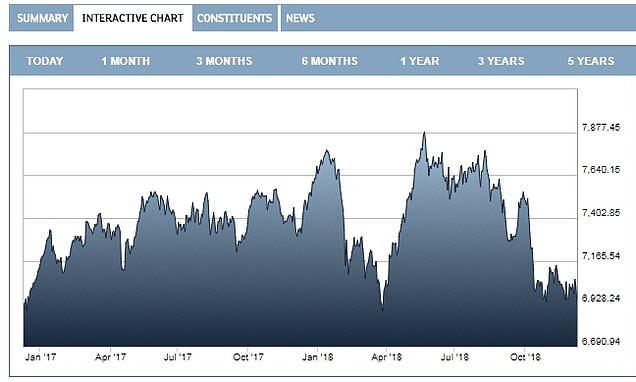 Investors have been selling off shares, sending the FTSE 100 index down 2.5 per cent this morning – its lowest level since December 2016.

The slump comes amid fears there could be a new clash in the trade war between China and the United States following the arrest in Vancouver of a senior Chinese executive at telecoms giant Huawei.

Meanwhile in Britain, Theresa May’s Brexit deal is in chaos and expected to be voted down by a massive majority in Parliament next Tuesday creating more uncertainty for investors.

Markets across Europe slumped after Huwaei’s global chief financial officer Meng Wanzhou, daughter of the company’s founder, was arrested in Canada at the request of America, who say she has violated US sanctions on Iran.

Experts said investors were ‘knocked sideways’ by the arrest, and fear the Chinese will hit back by stepping up the tit for tat trade war with Washington.

Markets in America had already been falling since Tuesday on fears of a US economic slowdown – despite President Trump and President XI agreeing to call a truce in their long-running trade dispute at the G20.

Ms Wanzhou’s arrest is stoking fears that the world’s two biggest economies will not be able to reach a long-standing truce and promote global growth. 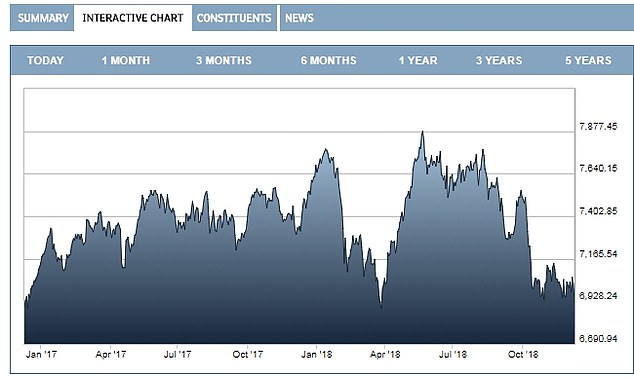 With MPs at war over Brexit and the future of the UK’s relationship with its largest trading partner in doubt, experts warned the City has been spooked.

Kallum Pickering of Berenberg Bank said: ‘For different reasons, a majority of MPs in parliament seem set to vote down Mrs May’s deal on the first attempt.

Theresa May today vowed to push ahead with the crunch vote on her Brexit deal despite Cabinet ministers urging her to delay it to avoid a catastrophic defeat.

The Prime Minister defied hardening opposition from Tory rebels and the DUP to make another impassioned plea for MPs to get on board with her plan.

She warned there is no other option on the table, and killing her proposal off would either end up with the UK crashing out of the EU – or Brexit not happening at all.

In interview on BBC Radio 4’s Today programme, Mrs May said her fear was that ‘Parliament in some way frustrates Brexit’.

The premier also confirmed that she is looking at ways to sweeten her blueprint for mutinous MPs – suggesting there could be a parliamentary ‘lock’ on the Irish border backstop arrangements coming into force.

Asked repeatedly about calls from senior ministers to put off the Commons showdown on Tuesday, Mrs May said: ‘We are in the middle of five days of debate in Parliament which will lead up to a vote on this issue.’

‘With the lower risk of a hard Brexit, Conservative Remainers might feel less compelled now to back the deal in a second vote.

‘Ironically, Mrs May’s chances could now lie in the hands of the Brexiteers.

‘If they realise the game for a hard Brexit is up, they might prefer the deal to the other options of a softer Brexit or no Brexit at all. But this is a long shot.’

Brexiteers are furious at the PM’s Brexit plan and are expected to launch a fresh attempt to oust her from the leadership if her deal is voted down next week.

While Remainers have also lashed her divorce package and are seizing on her weakness to push for another referendum in the hope they can stop Brexit altogether.

With her deal and authority under attack from all sides and a staggering 104 Tory MPs publicly indicating they will not back her deal, she is expected to lose by a massive margin next Tuesday.

The market slump will alarm ministers, but No10 have warned that the market could be plunged into turmoil if the PM’s deal is voted down.

While the Bank of England has issued a series of doomsday warnings about the fallout of a no deal Brexit – saying it could plunge the country into its worst recession in decades.

The Bank warned the pound will crash, inflation will soar, house prices will plummet and interest rates would have to rise if there is a no deal disorderly Brexit.

The oil and mining sectors led FTSE slump, tumbling 2.4 per cent and 2.9 per cent respectively. 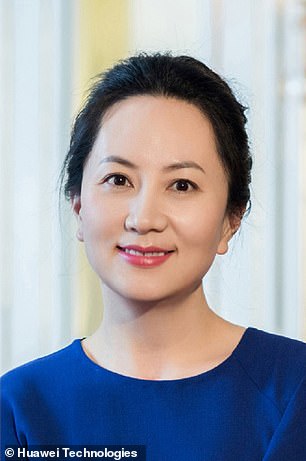 Arrested: Huwaei’s global chief financial officer Meng Wanzhou, daughter of the company’s founder, was arrested in Vancouver and faces extradition to the US

Crude oil futures fell more than 2 per cent as a deal among OPEC members – the oil cartel – to cut output at their producer group’s meeting later in the day appeared unlikely.

Copper fell for a fourth day after the chief financial officer of Chinese technology giant Huawei was arrested in relation to alleged violations of U.S. sanctions.

SpreadEx analyst Connor Campbell put the turmoil down to ‘an intense week for US-China relations’.

‘The post-G20 trade truce is starting to feel like a distant memory, with Tariff Man Donald Trump, and now the arrest of Huawei’s Meng Wanzhou, serving to undermine whatever (naive) hopes of progress had built up on Monday,’ he said.

‘China has, obviously, been quick to criticise the arrest, while Huawei is demanding her release. It is yet another huge blow to what was already looking like a fragile and inchoate ceasefire, and has sent the markets into another value-eroding funk.

‘Absent from normal trading on Wednesday due to the day of mourning for George HW Bush, the futures are indicating the Dow Jones is going to return to some rather nasty scenes. The US index itself is expected to drop 300 points, a loss in line with the situation in Europe.’

‘Investors are in the mood to accentuate all the negative news at the moment,’ said Ian Williams, analyst at Peel Hunt.

Carer forced to sell home or face jail to repay £21,000 benefits due to DWP error