The director of a company that owes businesses and staff $20 million after going broke while working on the Andrews government’s $1.8 billion Western Roads Upgrade is facing allegations he may have traded while insolvent.

But Civilink director Rick D’Ovidio may be protected from being charged over the allegation due to temporary legal defences introduced during COVID-19 that exempt directors from liability for insolvent trading debts incurred from March 25 last year, liquidators say. 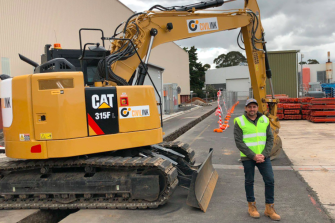 More than 200 subcontractors were left hundreds of thousands of dollars out of pocket last June when Civilink, a civil engineering firm, stopped paying for their work on the Western Roads Upgrade, which was Australia’s first private-public partnership arterial road upgrade.

The now-delayed project raises questions over the private-public model, which allows governments to avoid paying upfront costs for major projects but hands unprecedented control for construction and maintenance of roads to private consortiums.

The Netflow consortium behind the project is a joint venture comprising Cintra and Plenary, which entered a contract with WBHO to oversee the project’s design and construction. WBHO signed separate contracts with Civilink for upgrades on two roads built under the package.

A preliminary report into Civilink by liquidator SV Partners said it was investigating the allegation Civilink’s director traded while insolvent.

It also revealed the company owes more than $350,000 to the Australian Taxation Office.

Civilink is believed to have been insolvent from May 30, 2020, the liquidator reported. The company continued to work on the government project for another three months, WBHO confirmed.

The liquidator said Mr D’Ovidio may face separate charges that are not protected by the temporary COVID-19 defence, including failing to act with a degree of due care and diligence and failing to act in good faith.

Civilink owes creditors about $20 million. Most of the cash is owed to subcontractors working on the $1.8 billion project to upgrade eight roads in Melbourne’s west and maintain more than 260 kilometres of road from Footscray to Werribee.

Most of these creditors are unlikely to be repaid, the liquidator has warned in its latest report, prompting business owners to threaten legal action against the state government, arguing it is ultimately responsible for failures on the taxpayer-funded project. 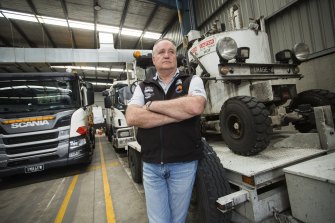 Craig Riley is one of the business owners owed money after a builder on the Western Roads Upgrade went bust.Credit:Paul Jeffers

“There’s got to be accountability up top. It’s a government project, they can’t just wipe their hands of this,” said Image Linemarking owner Craig Riley, who is owed $92,000, according to the liquidator’s report.

“We need to recoup the money … we feel on principle that we deserve to be paid.”

Head contractor WBHO is set to pay Civilink more than $180,000 by December this year. Subcontractors speaking to The Age have called on WBHO to release the money to them.

The Western Roads Upgrade was the first arterial road project in Australia funded under an availability-style private-public partnership, which gives the Netflow consortium free rein to design, build, finance and maintain the project for 23 years.

Where VicRoads would have previously managed arterial road upgrades, the project gives private companies control over construction and maintenance over two decades, resulting in the consortium earning a nominal $2.1 billion over that period. Failures on the project have prompted the Andrews government to distance itself from the private-public partnership model for future infrastructure projects, including the $2.2 billion Suburban Roads Upgrade.

The government is also tweaking the conditions of its major $7 billion-$9 billion private-public partnership contract for tunnelling the $15.8 billion North East Link, which will result in it taking on more risk.

It comes as the West Gate Tunnel – another private-public partnership – is running at least two years late and possibly $3 billion over budget in a crisis that will probably end up in protracted legal battles.

The Andrews government insists it had no prior knowledge of internal problems at Civilink and said management of subcontractors was the responsibility of the Netflow consortium.

When asked how Netflow responded to complaints from businesses owners when they went unpaid by Civilink, the joint venture’s chief executive Jose Espinosa said WBHO had provided monthly statutory declarations “stating that all subcontractors [including Civilink Services] of WBHO have been fully paid and no outstanding amounts are due to these subcontractors”.

“WBHO has been been fully paid by Netflow for all work performed – this has been assessed on a monthly basis by an independent expert,” he said.

Mr D’Ovidio did not respond to The Age’s request for comment.