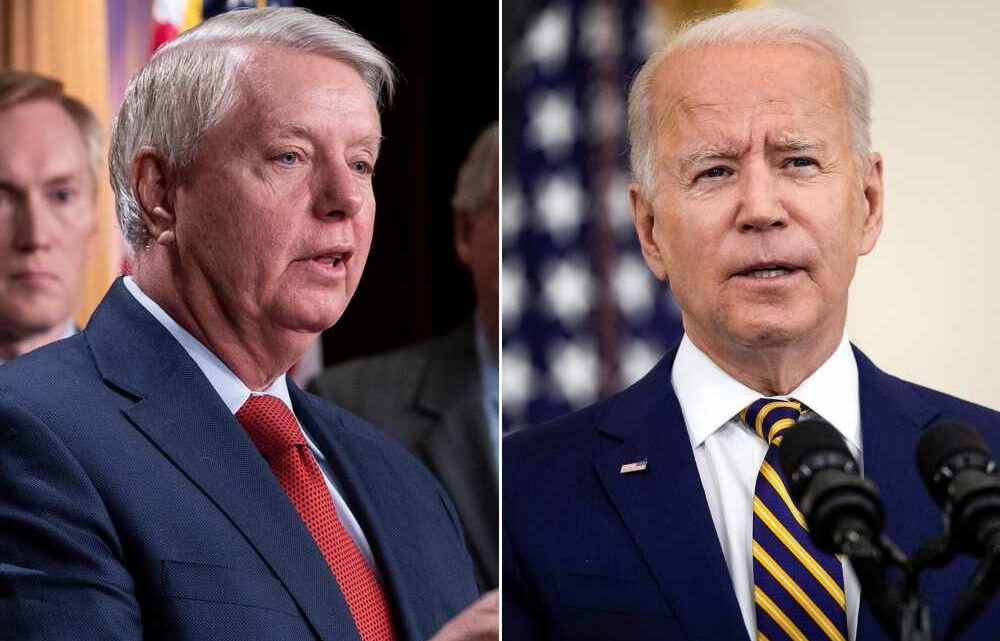 President Biden is receiving low marks on his first six months on the job from a former friend, as Sen. Lindsey Graham told reporters Tuesday that he was “amazed at how badly” the administration is governing.

“The border is in chaos. Afghanistan is teetering. China is rearing its head. Inflation is growing because we’re spending so much money that’s not paid for. You see lawlessness in the streets, the cops do not feel supported,” the top Republican on the Senate Budget Committee lamented to the press.

On the Afghanistan troop withdrawal, Graham revealed that he intended to write a letter to Biden and the Pentagon requesting they reconsider their plans.

The South Carolina senator told reporters he also planned to ask the president to maintain air support for the Afghan forces.

“It is not in America’s interest for the Taliban to take over Afghanistan. If the Taliban take over part of Afghanistan, I fear that al Qaeda and ISIS will re-emerge and we will be paving a way for another 9/11,” he explained.

The US troop withdrawal from Afghanistan remains in motion, a process on which Biden placed a Sept. 11 deadline.

Biden announced that deadline in April, offering US troops an additional four months from former President Donald Trump’s order to withdraw all troops from the nation by May 1.

In a speech explaining his decision, the president argued that the US had achieved its goal of bringing Osama bin Laden to justice and destroying al Qaeda, his terror network, a contention that many progressives and a growing number of Republicans support.

Critics of the move have cautioned that it could lead to the creation of a new ISIS, as President Barack Obama’s decision to withdraw from Iraq did in 2011 — and as the Taliban continue to move north in recent gains amid the withdrawal.

Turning his focus to another issue on Biden’s agenda, Graham also slammed the president’s handling of the southern border, saying the “administration is in denial” over the severity of the situation, as well as the “criminal element” among the flood of migrants.

The Biden administration’s undoing of Trump’s border policies has prompted a flood of Central American and Mexican illegal migrants at the US border, including thousands of unescorted children.

Central Americans looking for refuge from the Northern Triangle countries — Guatemala, El Salvador and Honduras — have taken these policy moves, as well as the overwhelmingly more welcoming tone from Democrats, as a sign that Biden is inviting them to cross the border.

Insisting that the border was not facing a crisis, Homeland Security Secretary Alejandro Mayorkas said in early March that the problems the agency faced should be blamed on the previous administration.

The data, however, overwhelmingly shows that migrants are flooding the border because they believe Biden will welcome them with open arms, with over 170,000 illegal crossings a month.

Graham did express some optimism that Biden’s encouragement of bipartisanship and national unity could lead to deals being made in Congress, citing the embattled police reform negotiations currently underway as well as infrastructure talks in the Senate.

“I sense a growing effort to do something about the problems of our country. I’m involved in an effort with Sen. Scott to reform the police, not defund the police,” Graham said, referencing fellow Palmetto State lawmaker Sen. Tim Scott (R-SC). “I’m involved in an effort with 20 other Republicans and Democrats to pass an infrastructure bill for roads, bridges, and ports.”

“So in the middle of all the chaos and all the fussing and fighting, we’re actually beginning to show signs of getting things done,” he said optimistically before hedging his bets.

“I don’t see any effort by the Biden administration to adjust their policies on the border,” he added. “They seem to be doubling down on policies that are failing.”

Pedri, 18, breaks down in tears after Spain's penalty shootout loss to Italy as Enrique compares him to Andres Iniesta