‘Like leaving doors of the Louvre open’: New fee for day tourists to Venice

Venice: The city long referred to as La Serenissima, translated into English as The Most Serene, is no longer so peaceful.

As the world emerges from two years of pandemic restrictions, the splendour of Venice’s canals and its winding alleyways are again in high demand. 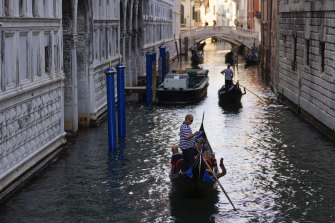 Tourists have returned to Venice after pandemic shutdowns but now face higher taxes.Credit:AP

Over the Easter weekend, more than 120,000 people visited the city, built in the 5th century AD on islands in the shallow Venetian Lagoon, and a steady flow have followed since. Instagrammers and Tiktokers are promoting the city an essential destination to a new generation.

And while the return of tourists has brought life back to the place widely considered to be the centre of European art and architecture, the city is once again planning a levy targeted at day-trippers, which have long been excluded from an existing city tax on tourists who stay overnight.

“COVID made us realise that what was an everyday occurrence before isn’t acceptable anymore,” Venice tourism commissioner Simone Venturini says. “The mentality has changed, as has the sensitivity towards crowds.” 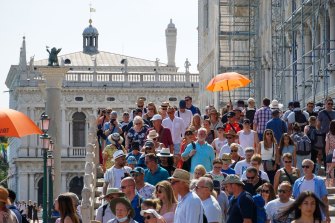 Tourists on the Ponte della Paglia historic footbridge in Venice in June.Credit:Bloomberg

The new fee will come into action from January 16 next year, making it the first city in the world to charge an entrance fee. Tourists who choose not to stay overnight in hotels or other accommodation will have to sign up online in advance for the day they plan to come and pay a fee.

These will range from 3 to 10 euros (AU$4.45 to $14.82), depending on advance booking and whether it’s peak season or the city is crowded. The busier the city gets, the higher the charge.

Established turnstiles at the rail station will check whether tourists have the necessary QR code to enter, while about 15 controllers will carry out spot checks throughout the city, with fines of up to €300 for visitors without passes.

Local authorities have long been discussing plans for a so-called “tourist tax” that would help city authorities keep up with the average 20 million tourists arriving annually pre-pandemic. When the idea was first canvassed in 2019, the city’s mayor Luigi Brugnaro, a centre-right wing independent businessman, said he expected “protests, lawsuits, everything”.

“But I have a duty to make this city liveable for those who inhabit it and also for those who want to visit,” he said. The plans were approved by the Italian Parliament in December that year but have continually been kicked down the road.

On average, only about 30 per cent tourists who flooded the city annually before the pandemic stayed for one night or more. But those visitors account for around 70 per cent of tourism revenue, and for 100 per cent of tourist tax payments which amount to some €30 million per year.

The remaining 70 per cent of tourists are regarded as “hit-and-run day-trippers”, who pile in on trains and buses and alight from huge cruise ships. They often bring pre-packed lunches, but might buy a bottle of water, or pick up a cheap souvenir, which have been increasingly imported from China or Taiwan.

They clog the narrow streets and take selfies on bridges, generate rubbish and add to the wear and tear of a delicate urban fabric at the UNESCO World Heritage site. It has made life almost unbearable for locals who live or work there.

Visitors to Venice have also recently received fines for swimming in the canals, which is prohibited, and sunbathing topless on a historic landmark.

Four German tourists chose to use an 18th-century wellhead in Campo Zaccaria as their picnic spot last month and were fined more than €1000 each.They had spread a tablecloth over the stone structure in the centre of the square and set out chairs around to enjoy their lunch. 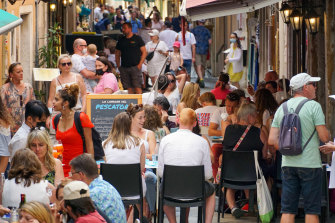 Venice back to its busy old self in August 2021.Credit:Bloomberg

But Ernesto Pancin, head of the local association representing bar and restaurant owners, does not agree with the idea of the tax. He says authorities should instead he encouraged day-trippers to explore lesser-known areas at peak time, away from St Mark’s Square.

“Districts like Castello and Santa Croce are beautiful, but they stay empty most of the day and would finally come back to life,” he says.

“Venice is a city of the world. Every person coming from the other side of the planet has the right to see it, booking or no booking.”

Earlier this year, the city announced it would attempt to stem the tide of tourist shops selling “tacky” Chinese-made souvenirs and to boost local craftsmanship. The new rules to spruce up the historic centre prevent the introduction of new businesses selling plastic gondolas, €2 carnival masks and Venice-themed gadgets imported from Asia. In 2017, the city banned new kebab shops and other fast-food restaurants from opening.

Mass tourism began in the mid-1960s and, while visitor numbers kept climbing, the number of Venetians living in the city dwindled after they were overwhelmed by congestion, and the high cost of delivering food and other goods in car-less Venice, as well as frequent flooding that damages homes and businesses.

Authorities hope the fee reduce frictions between day visitors and residents. In peak times, tourists can outnumber residents 2-to-1 in an area which measures only five square kilometres. It is now home to about 50,000 permanent residents – 100,000 fewer than the 1950s.

More a museum than a modern city, it has become addicted to the cash the tourist hoards bring in. But the damage caused by unregulated tourism has been acute, placing a huge strain on its ancient infrastructure.

Flooding, known as “acqua alta,” has become more frequent, with the worst surge in more than 50 years causing an estimated 1 billion euros in damage in 2019. To protect the city, Italy’s government approved measures last year to ban large cruise ships in the Venetian lagoon.

Dina Ravera, head of tour operator Italia SpA, says you simply can’t allow a city like Venice “to be devastated by hordes of tourists”.

“It’s an open-air museum and to preserve it, it’s necessary to limit the flow of people,” she says. “Otherwise, it would be like leaving the doors of the Louvre open.”

Michele Zuin, the city’s finance councillor, said the new system was intended to better manage tourist flows – and not to make cash. He wants the proceeds to lower residents waste charges, which are higher than other parts of the country.

“Setting limits on entrances at certain times may be necessary, but this does not mean closing the city,” he said. “Venice will always remain open to everyone.”