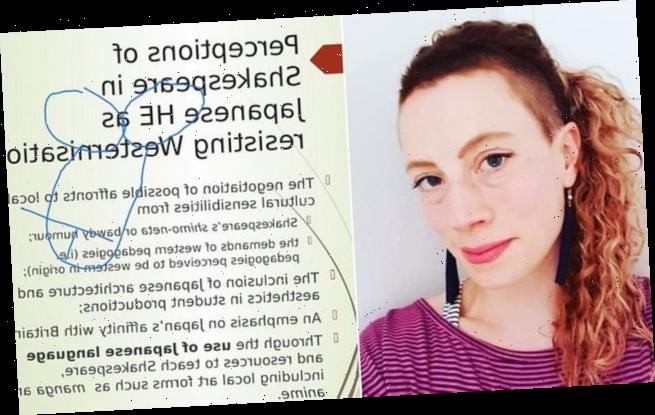 Lecturer stunned as hackers doodle genitals across her presentation

As you don’t like it: University lecturer is stunned when hackers doodle genitals across her Shakespeare presentation as she conducts Q and A session with students

A university lecturer was stunned when hackers doodled genitals across her Shakespeare presentation during a Q&A session with students.

Dr Sarah Olive had been putting forward her linguistics research to a class of dozens at the University of York when the lecture was suddenly sabotaged.

The senior lecturer had been talking for 50 minutes when she spotted the red pen tracing across the screen.

The 38-year-old then took a screengrab for evidence – before watching in disbelief as the pranksters ‘started drawing hairs on the balls’.

Dr Olive is adamant that the offensive ‘penis graffiti’ was the work of hackers as she ‘knew no one in the seminar would draw a c**k and balls over her presentation’. 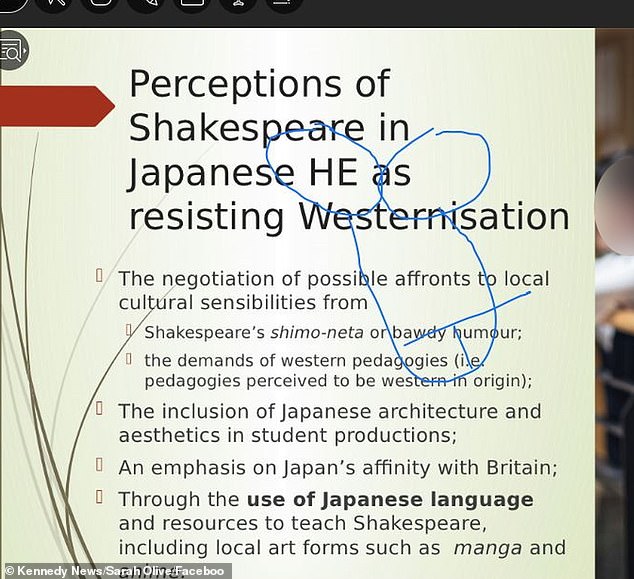 The academic claims she felt more disappointed and annoyed for the students then upset about her work being defaced with the ‘misogynistic’ cartoon.

However she believes the hackers could be both sexist and racist as the slides had images of young Asian women on them – and she doubts they would have done it on a male’s lecture.

Dr Olive, from York, North Yorkshire, said: ‘For me, it’s only mildly irritating. I was very glad to have got the presentation done.

‘My main strength of feeling was for the students. It was the one part of the session intended for students to participate.

‘I think there’s a sexist, misogynistic element to it. The voices were male voices.

‘I think drawing male genitalia on slides that a woman is presenting, that have pictures of young Asian women on them, is potentially both sexist and racist.

‘Is this happening to male professors? I think that’s what worries and saddens me about it.

‘It seems like it’s targeted at silencing [or] speaking over women. Or trying to scare women and make them anxious.

‘I don’t feel that – I just feel more annoyed for the students.’ 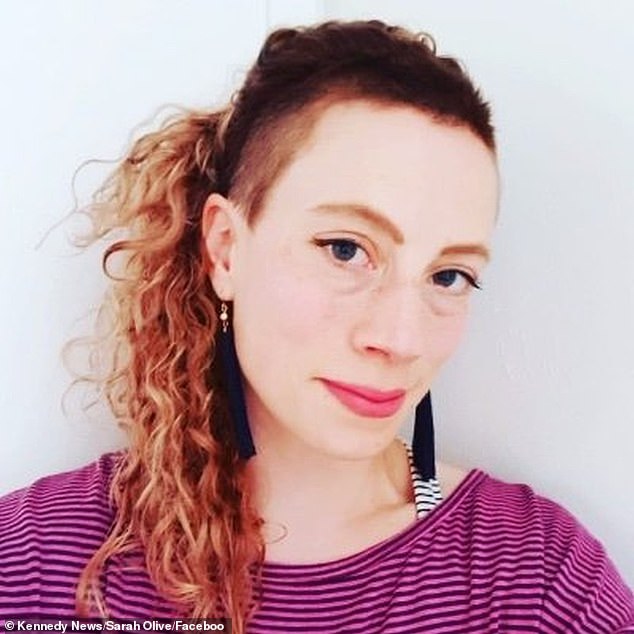 The incident started when Dr Olive noticed voices speaking over her presentation and presumed someone had left their microphone on.

Dr Olive said: ‘[The day] was fantastic in terms of getting the presentation done. I was speaking for 50 minutes.

‘You end it – you’re happy. I was feeling good.

‘Then I started to hear voices, which sounded quite disconcerting. At first, I thought someone had left their mike on or one of the participants was trying to get my attention.

‘I paused and I think I said ‘does someone want to ask a question?’.

‘I didn’t hear an answer so I assumed it was a mistake. Then it built up steam.’

Dr Olive tried her best to carry on as normal, asking participants for questions as the unwelcome visitors continued their explicit art across her research presentation.

Dr Olive said: ‘It started with the occasional word then it became a very intermittent interruption that I couldn’t always tell what was being said.

‘I wasn’t sure whether sometimes it might be languages other than English that were being used.

‘I could tell someone was calling my name, saying ‘Sarah’. I’d pause to ask ‘is there something you want me to say?’

‘It was only when the graffiti over the slides [appeared that it] made me realise it was hackers.

‘I knew nobody in the seminar would be drawing a c*ck and balls over my presentation. 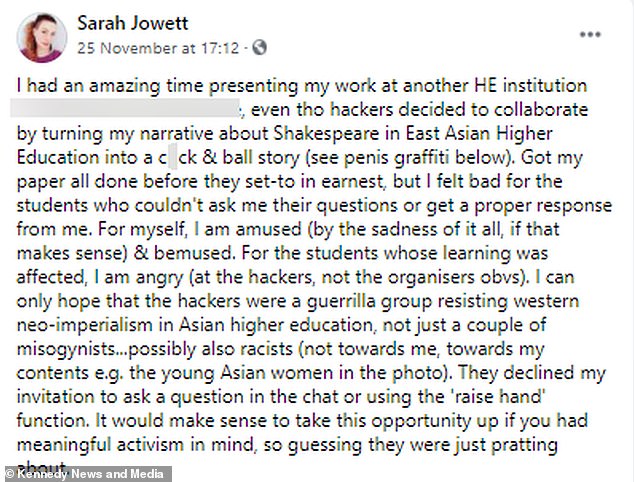 ‘I was trying to answer a question from a colleague and it became increasingly hard to because I was being interrupted so often.

‘My gut feeling was that starting to draw a c*ck and balls [was because] they thought they weren’t bothering me too much.

‘I said ‘would the hackers like to ask us a question?’ Maybe they didn’t get the riled reaction they wanted.

‘They weren’t getting that so maybe they amped it up.’

After the embarrassing incident, Dr Olive claims she was sent messages of ‘sympathy’ from colleagues and students.

Dr Olive said: ‘We were naturally drawing to the end of our time anyway and we perhaps only ended five minutes early.

‘The nice thing about it was staff and students on the call asked me their questions by email later or expressed their sympathy, empathy, with me.

‘Maybe we could say this led to something very warm and positive, and bonding, rather than being a terrible divisive thing it was intended to be. It actually brought everyone closer together.’

On her post on social media, Sarah said: ‘I had an amazing time presenting my work at another HE institution [online], even [though] hackers decided to collaborate by turning my narrative about Shakespeare in East Asian Higher Education into a c*ck and ball story (see penis graffiti below).’ 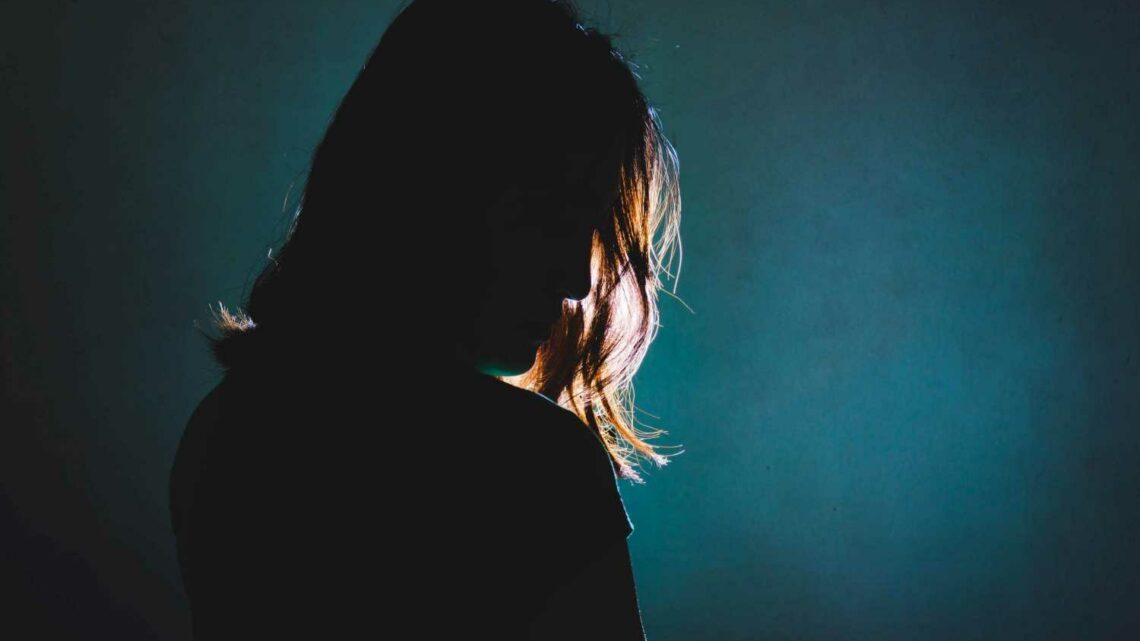