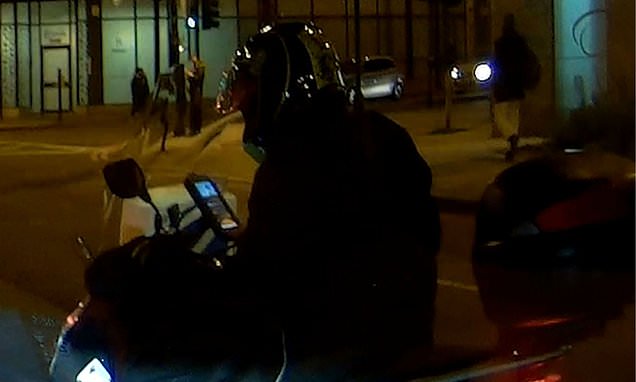 A learner driver has been caught watching a YouTube video on his scooter in packed London traffic.

The rider stared at his phone – which was mounted to his windscreen – while waiting in a queue of cars in Brixton on November 30.

At one point he even appeared to take his glove off and touch the screen to skip the adverts.

Professional photographer Adam Bronckhorst, 44, from Brighton, East Sussex, caught the scene on his dashcam while on his way home from a shoot.

He uploaded the video to a closed Facebook group with the caption: ‘Is there anything in the highway code about not watching TV while riding/driving?’

In the clip the scooter driver can be seen joining the queue of traffic before the vehicle comes to a halt. 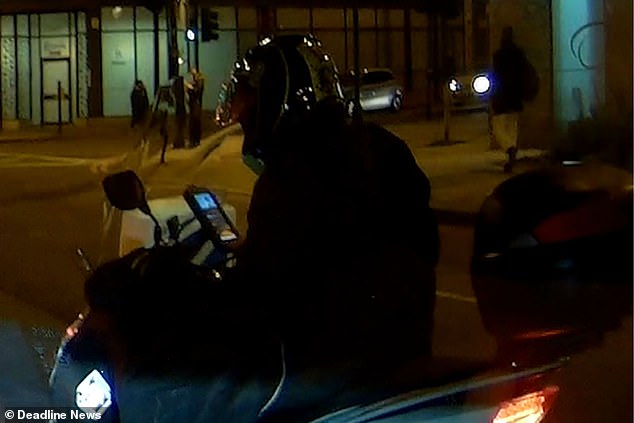 A learner driver is seen watching a YouTube video on his mobile while at a junction in Brixton, London

The driver then casually watching the video before he takes of his gloves to touch the screen.

Mr Bronckhorst said: ‘It’s incredibly dangerous doing that in London traffic as it is kind of stop, start.

‘If you are a moped driver you can just weave through the traffic but, you need to concentrate a lot.

‘I think he was either watching something or listening to something on Youtube. You can see the pictures moving and at one point he took his hands out if his mittens to change the thing on his screen.

‘I don’t know if he was changing the songs or skipping the ads.’

A spokesman for IAMRoadSmart said: ‘This is clearly illegal and dangerous behaviour by an over confident rider who seems to think looking at a hand held phone while riding is cool. It’s not. 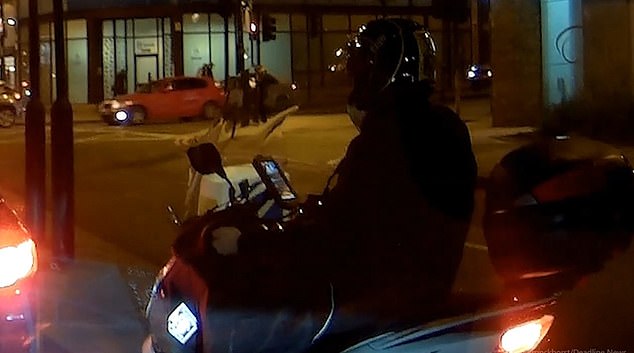 ‘No matter how good a rider you think you are the brain cannot multi-task so you will be distracted at some moment by what is on the screen.

‘If that moment coincides with a pedestrian stepping out, a car pulling out or even something as simple as a pothole then you won’t be able to react in time and the consequences are totally out of your control.

‘The lack of traffic police on our roads means that far too many drivers and riders still think they can get away with hand held smartphone use.’ 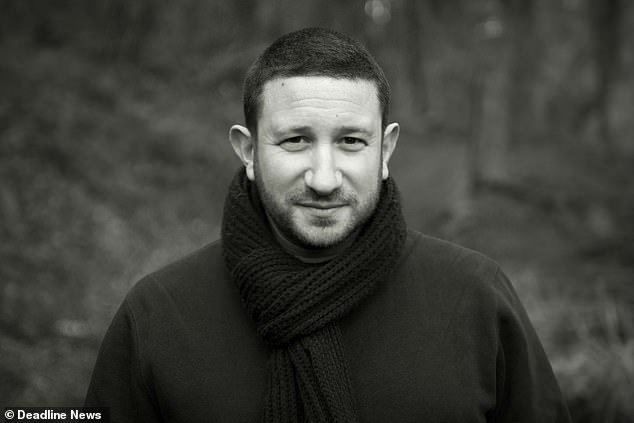 Adam Bronckhorst (pictured), 44, from Brighton, East Sussex, caught the incident on his dashcam

The Highway Code states, ‘It is illegal to hold a phone or sat nav while driving or riding a motorcycle… and the device must not block your view of the road and traffic ahead.’

It also applies while in queuing traffic and stopped at traffic lights.

The penalty for using a phone while riding could result in getting six penalty points and a £200 fine.

However, if you have recently passed your test in the last two years your licence could be revoked.