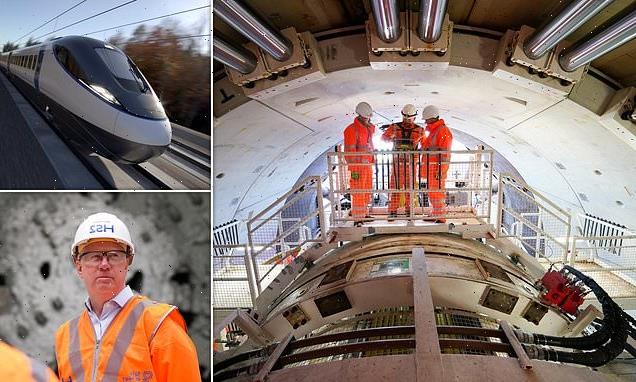 The Government maintains its controversial HS2 project remains within budget in spite of leaked documents which suggest the first phase could blow out ‘many billions’ more than anticipated.

The HS2 rail project – which is set to link London, Birmingham, Manchester and Leeds in a bid to rebalance the UK’s economy –  has been called ‘expensive, wasteful and destructive’ by environmentalists.

Critics claim the line will destroy or irreparably damage 108 ancient woodlands and 693 wildlife sites, and that Euston Square Gardens will be built over with a temporary taxi rank before being sold off to developers.

Phase One of the project has a £40.3 billion target cost, but a report presented to the HS2 board by deputy chair Sir Jon Thompson said it was ‘very unlikely’ that price point would be achieved, the Financial Times reported. 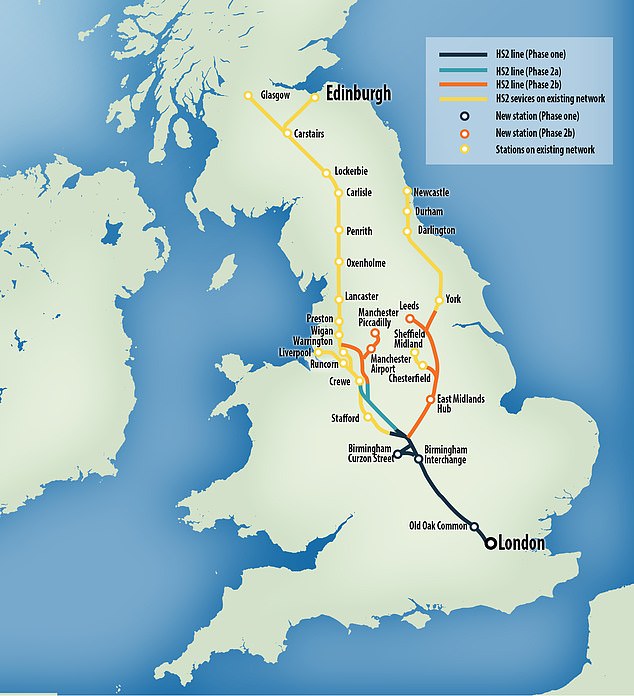 The HS2 high-speed rail line is a ‘loss-making’ project, which will not be completed before 2041, Conservative MP Andrew Bridgen warned the House of Commons 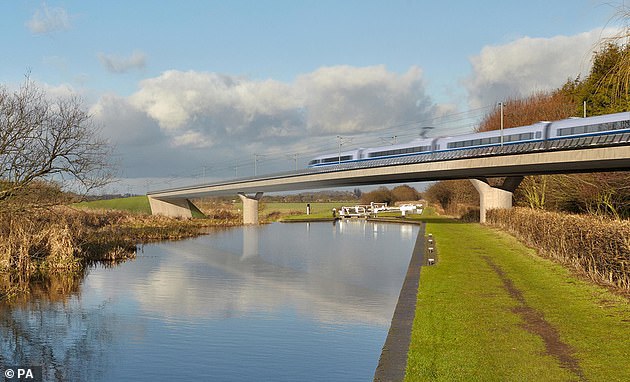 Sources last night said the planned changes would represent a ‘significant scaling back’ of the project (Pictured: An artist’s impression of the HS2 train on the Birmingham and Fazeley viaduct) 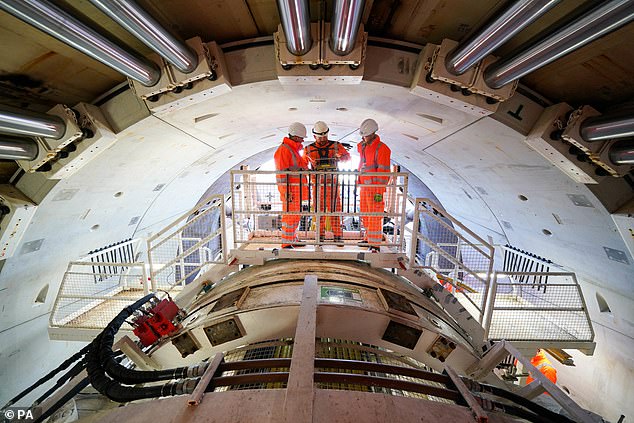 HS2 CEO Mark Thurston (left) is shown around HS2’s tunnel in December 2021. The Government has previously said the ‘funding envelope’ for the first phase of the project is £44.6 billion, including a £4.3 billion contingency package

The Government has previously said the ‘funding envelope’ for the first phase of the project is £44.6 billion, including a £4.3 billion contingency package.

The leaked document, dated June this year and seen by the newspaper, reportedly concluded there was only a 50% chance the extra contingency budget would be enough to cover the total costs.

Sir Jon was appointed as a non-executive director of HS2 Ltd in April 2021, and became deputy chair in March this year.

His review is reported to state that the first phase’s total cost was likely to be ‘many billions more than the reported estimate’. 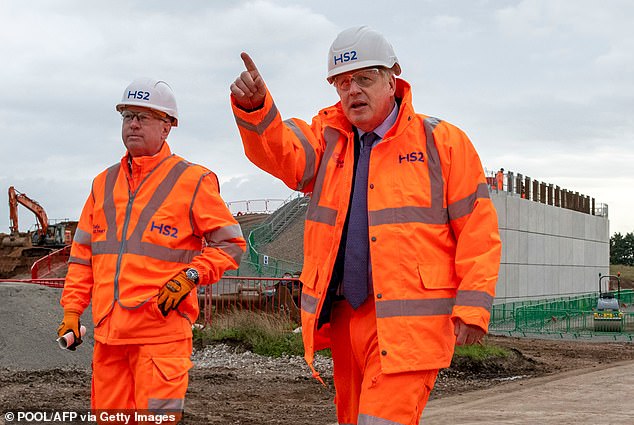 Northern leaders and the rail industry are braced for a downsizing of the UK’s biggest infrastructure project in a report expected to be published during or after the Cop26 summit (Pictured: Boris Johnson on an HS2 site in September 2020)

Why is HS2 so controversial?

The Woodland Trust, a conservation charity, calls HS2 ‘a grave threat to the UK’s ancient woods, with 108 at risk of loss or damage’.

But HS2 says only 0.29 square kilometres (0.11 square miles) of ancient woodland will be lost during the first phase. HS2 says it will reduce journey times between London and northern England and add capacity to Britain’s crowded rail network.

Critics question whether HS2 is worth its ballooning price tag – now reported more than £100billion – especially after a pandemic that might permanently change people’s travel habits.

The first phase linking London and Birmingham is due to open between 2029 and 2033, according to HS2 Ltd.

In September Boris Johnson joined the front line to see work begin on HS2, as shovels hit the ground in Solihull.

He said the ‘incredible’ scheme, launched in 2009, would deliver not just ‘22,000 jobs now, but tens of thousands more high-skilled jobs in the decades ahead’.

Transport Secretary Grant Shapps told MPs last year the first trains may not be up and running until 2031. The project has been shrouded in controversy since its birth, with campaigners warning it is ‘decimating countryside and creating a huge financial burden’.

In April wildlife presenter Chris Packham lost a High Court bid to stop ancient woodlands being dug up for the project.

There was also uproar when HS2’s annual report revealed each person working on it was costing the taxpayer almost £100,000 on average.

It also revealed chief executive Mark Thurston was paid £659,416 last year – four times as much as the PM. More than £3.3million was spent on ‘travel and subsistence’ and £802,000 on recruitment fees.

He said the decision to record costs in 2019 prices means none of the figures reflect ‘what has been or is being paid’.

It added: ‘In almost every area reviewed significant developments are planned in 2022/23 which impact on the estimates and risk.’

But the Government has said it is committed to delivering the project on time and within its most recent budget.

A spokesman said: ‘HS2 is under way, within budget, and supporting 28,000 jobs. The Government remains committed to delivering it on time and to budget.

‘As with all projects of this scale, contracts and scope are routinely considered to ensure they continue to deliver the value for money for taxpayers.’

The project has already tripled in cost since it was approved a decade ago.

The Government sparked anger in November 2021 when it published its Integrated Rail Plan (IRP), which included scrapping HS2’s eastern leg between the East Midlands and Leeds.

In September 2021, Conservative MP for North West Leicestershire Andrew Bridgen told Parliament he had received information from a whistleblower within HS2 Ltd, who claimed the first phase of the line, running between London and Birmingham, will not open until 2041, some 10 years later than initially expected.

He told MPs: ‘Experts in the field estimate that the energy requirements of HS2 trains will be five time that of conventional rail.’

‘Can we have an extended debate on the impact of HS2 on Government’s energy policy and the level of subsidy this loss-making project will have to be supported with annually if it is ever built?

‘Could we have this debate before 2041, which is the date that my whistleblower at the very top of HS2 tells me the project for phase one will actually be able to carry passengers between London and Birmingham?’

It comes as work suspensions, social distancing and reduced productivity over the past 12 months saw HS2’s costs soar by another £1.7bn – with the project’s estimated overall budget now swelling over £106billion.

Commons Leader Jacob Rees-Mogg dismissed Mr Bridgen’s claims, saying: ‘The delivery and service of HS2 phase one remains 2029-2033, so I am interested in his whistle blower and I will of course pass the whistle on to the Secretary of State for Transport.’ 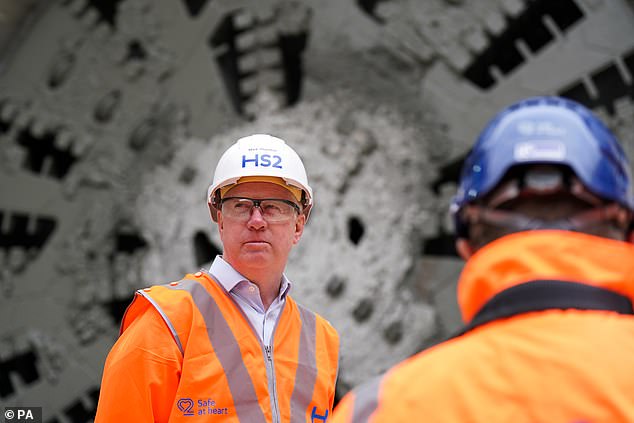 Mark Thurston, CEO of HS2 stands by the project, which is already costing three times more than initially expected 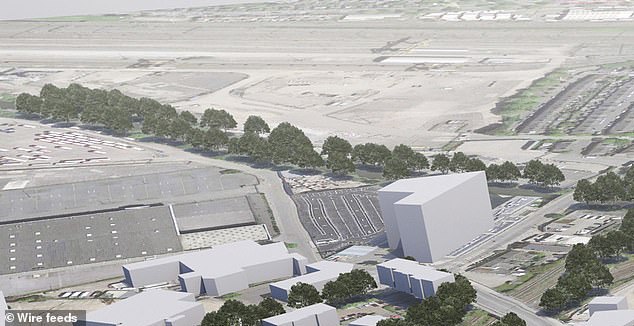 HS2 costs soared another £1.7BILLION during Covid with total budget swelling to £106bn

The cost of the controversial HS2 high-speed rail project increased by a further £1.7billion during Covid due to social distancing measures and work suspensions caused by the pandemic.

Coronavirus and lockdown restrictions disrupted work at most HS2 sites, causing further delays which have put even more strain on the UK’s biggest infrastructure project.

Similar pressures have been reported by industry experts in projects ranging from Crossrail and the A303 Stonehenge tunnel to the Tideway tunnel and the Hinkley Point C nuclear power plant in Somerset.

As a result of work suspensions, social distancing measures, and reduced productivity, costs have soared by around £1.7billion – another increase on the project’s estimated £106billion budget.

Opposition to the project is mounting, with local anger contributing to the Tory by-election defeat in Chesham and Amersham. The new line is due to run through the Buckinghamshire constituency.

The costs associated with Phase 1 of the line between London and Birmingham have increased by as much as £800million, people close to the project told the FT.

That increase follows an £800million rise announced by HS2 in October, including money spent on remediating the terminus site at Euston in London.

The price of the Birmingham Interchange station also rose by £100million to £370million even before contractors have been appointed.

One contractor close to the project said that HS2 Ltd, the state-funded body responsible for delivering the line, ‘doesn’t really know how much Covid has added’. HS2 Ltd declined to comment when approached by MailOnline.

Construction started on Phase 1 of the London to Birmingham line in August 2020 after more than a decade of planning. But the ballooning costs could add to Treasury fears that HS2 will be a black hole for taxpayers.

The Department for Transport conceded to MailOnline that there had been ‘unavoidable costs’ arising from the coronavirus pandemic.