The girl who will inherit the hermit kingdom: As Kim Jong Un’s daughter Ju-ae, ten, makes second appearance with North Korean leader, experts say she is destined to rule next

Kim Jong-un may have chosen his daughter as his heir, experts have said, after she appeared with the North Korean dictator in public for the second time.

Ju-ae, who is thought to be aged 10, was pictured smiling with her father as he awarded scientists and military officials responsible for building the country’s latest nuke, the second time in a week she has been pictured in front of the missiles.

Ankit Panda, an expert in North Korea with the Carnegie Endowment for International Peace, said the ‘striking’ images suggest Ju-ae is ‘being positioned as a potential successor’.

Little is known about the girl, who is thought to be the middle of Kim’s three children. 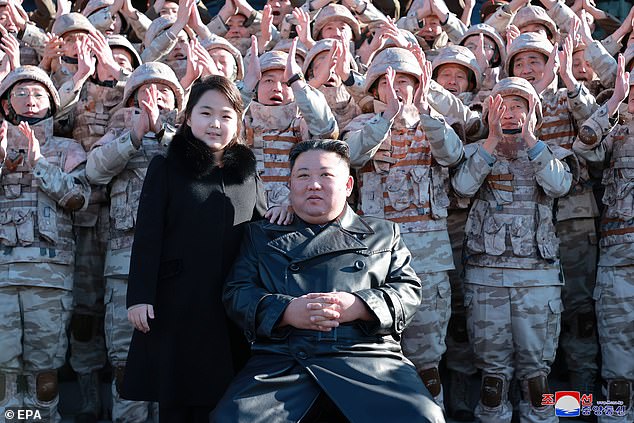 Kim Ju-ae, daughter of Kim Jong-un (pictured together), is likely being lined up as the heir to North Korea’s dictatorship, experts have said 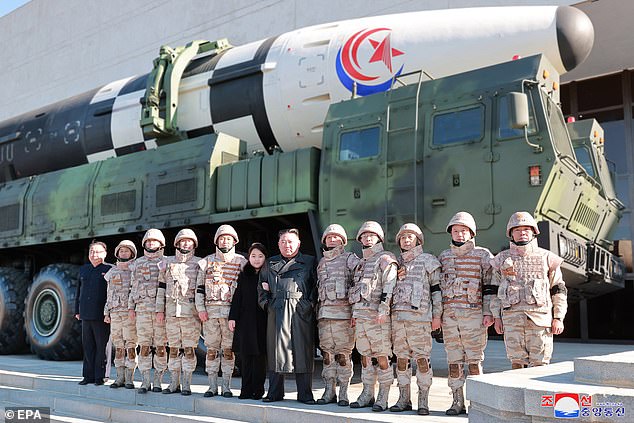 Kim Ju-ae has been pictured alongside her father and North Korea’s nuclear weapons twice in a week, which seem calculated to project an image of power both at home and abroad

The first news of her existence emerged from retired US basketball player Dennis Rodman, who struck up an unlikely friendship with Kim early during his rule.

Rodman, who visited North Korea several times before his friendship with Kim hit the rocks, recalled meeting one of the dictator’s children in 2013.

The sportsman said he spent time ‘relaxing by the sea’ with Kim and his wife, Ri Sol-ju, and was allowed to hold their baby daughter – who he said was called Ju-ae.

South Korean spies have previously said that Kim’s eldest child, now thought to be aged 12, is a boy – though nothing else is known about him and he has never been seen in public.

The youngest child is believed to be a daughter, born around March 2017.

Ju-ae’s sudden appearance alongside her father and North Korea’s nuclear weapons appears calculated to project an image of power – both to the North Korean people and to the world.

State media’s description of her as Kim’s ‘most beloved’ and ‘precious’ child also give strong hints that she is the favourite to succeed him.

Mr Panda said: ‘This is certainly striking. The photograph of Kim Ju Ae standing alongside her father while being celebrated by technicians and scientists involved in the latest ICBM launch would support the idea that this is the start of her being positioned as a potential successor.

‘State media underscoring her father’s love for her further underscores this, I think. 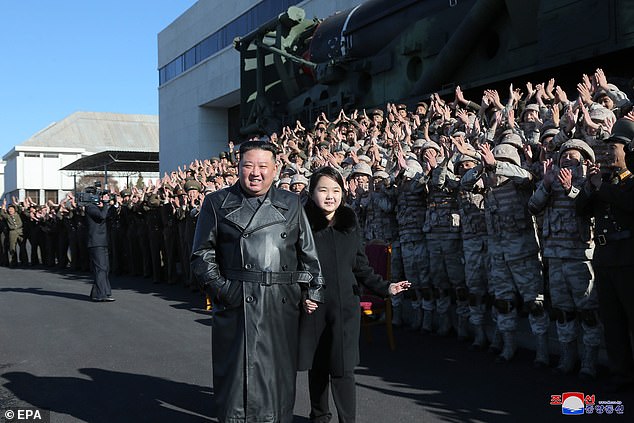 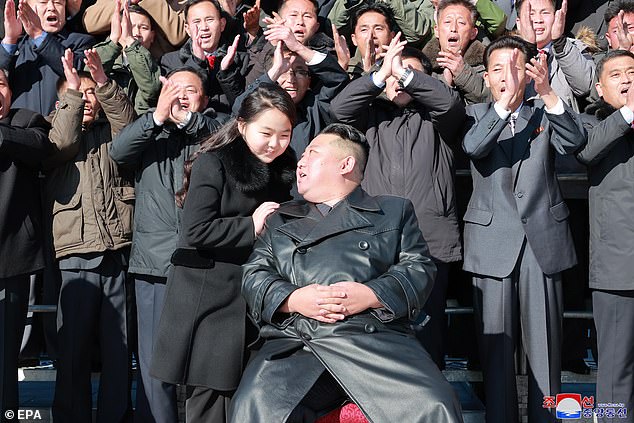 Kim Ju-ae (pictured with her father) almost certainly met with US basketball player Dennis Rodman when he visited North Korea in 2013, and held her as a baby

Ju-ae stood next to father Kim in front of North Korea’s latest nuke as he awarded the officials who built it, which experts said is unlikely to be a coincidence

‘Finally, both of her initial public appearances have been in the context of strategic nuclear weapons — the crown jewels of North Korea’s national defense capabilities. That doesn’t strike me as coincidental.’

However, questions still remain over Ju-ae’s standing within the line of succession, known in North Korea as the Mount Paektu Bloodline.

Kim Jong-il did not reveal the existence of his own successor – Kim Jong-un – until very late in his reign when his health was clearly ailing.

Kim Jong-un has experienced health scares in recent years, including rumours that he had died back in 2020, but those have largely fizzled out in recent months as he returned to making regular state media appearances.

Questions about his heir – which at one time was fancied to be Kim’s sister, Kim Yo-jong – have also receded as the dictator has reasserted himself as undisputed ruler.

All of which begs the question: Why has Kim decided to reveal his daughter to the world now?

Doing so carries considerable risk for Ju-ae, who is now likely to be the targeted by North Korea’s many enemies, and few benefits for Kim – unless concerns about his own fitness to rule remain.

Ju-ae would also be the first female heir-apparent to North Korea, raising questions about whether she could succeed in controlling the male-dominated military and Worker’s Party power-brokers necessary to rule the country. 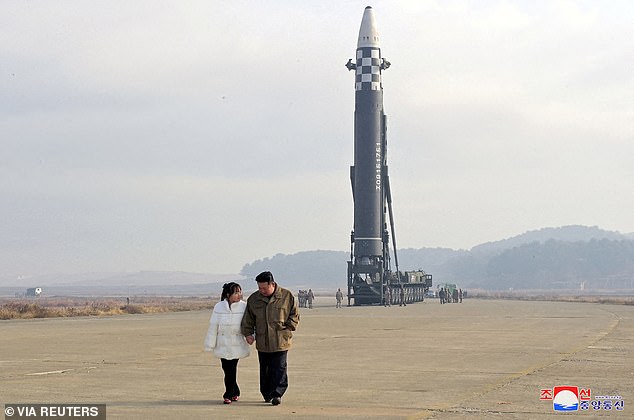 Cheong Seong-Chang, of the private Sejong Institute in South Korea, suggested that the girl’s gender may explain why Kim decided to reveal her so early – to get his people used to the idea of a female leader.

Cheong added that it is not unusual for North Korean leaders to choose their heirs at a young age, based upon which they think shows the greatest leadership qualities.

Kim Jong-un is thought to have been chosen by his own father aged eight – despite only being named as heir years later – and is also the middle of three children.

Leif-Eric Easley, a professor at Ewha University in Seoul, agreed – saying: ‘Kim may be signaling to other North Korean elites that he is mentoring his daughter for a role in the leadership.’

However, the rumoured existence of an elder brother has led to suggestions that Kim is keeping his true heir hidden from the public, at least for now.

Soo Kim, a security analyst with the RAND Corporation in California, told PBS: ‘We’ve been told that Kim has three children, including possibly a son.

‘If this is true, and if we assume that the male child — who has yet to be revealed — will be the heir, is Ju Ae truly Kim’s most ‘precious’ from a succession standpoint?

‘I think it is too early to draw any conclusions.’

Soo speculated that unveiling Ju-ae may have been designed as a distraction, either to get the West used to the idea of living with North Korea’s nuclear threat or to hammer home to domestic viewers that nukes are the country’s future. 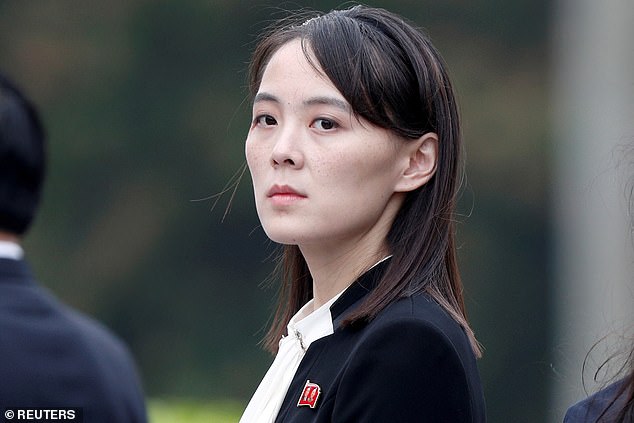 Until Ju-ae’s sudden appearance, it was rumoured that Kim’s eldest sister – Kim Yo-jong – was being lined up to replace him

Listen To This: Gonna Make It Anyway!
World News