Home » World News » John Legend opens up about fatherhood, abortion, and falling out with Kanye West: 'It's my story, and these are the facts'

John Legend opens up about fatherhood, abortion, and falling out with Kanye West: 'It's my story, and these are the facts'

John Legend recently gave a rare intimate performance at London’s legendary jazz club Ronnie Scott’s for “Living Legend,” his installment in Audible’s storytelling-style Words + Music series. Onstage, the EGOT-winner performed Paul Simon’s “Bridge Over Troubled Water” and Stevie Wonder’s “Ribbon in the Sky” as well as his own hits like “Used to Love U,” “All of Me,” and the Oscar-winning Selma ballad “Glory,” and he shared anecdotes about his marriage to Chrissy Teigen, fatherhood, and his pre-fame youth — about his conservative homeschooled upbringing, his mother’s decade-long descent into drug addiction, and how his early career ascendance coincided with that of his onetime friend and mentor, Kanye West.

Speaking to Yahoo Entertainment to promote the aptly titled “Living Legend,” the always outspoken singer-songwriter, who is expecting his another baby with Teigen, opened up about the 2020 loss of his son Jack after Teigen had no choice but to undergo a life-saving late-term abortion; his crusade for women’s reproductive rights; how being raised by a single dad helped him become the father he is today; and how, despite his falling out with West, their “recontextualized” histories will be forever intertwined.

Yahoo Entertainment: I learned so much about your early life from listening to “Living Legend,” like how your mother’s addiction battle left your dad to mostly raise you on his own. You’re such a public father figure yourself now, and such a great parent. How did being raised by a single dad for much of your life affect your own parenting style?

John Legend: Well, I think my dad's been a really great influence on me and my brothers. … He was so engaged. My mother was too, until we lost her [to addiction] for a while. But both of them loved teaching us, loved playing games with us; they really had a hands-on approach to our development and growth. We didn't have a lot of money, but they put a lot of their own energy and ingenuity and creativity into helping us to become the best young people we could be. And having a hands-on dad like that clearly was a good influence for me. Some of the things he used to say to me when I was a kid, I end up saying similar things to my kids; I find myself sounding like him when I talk to my kids, unconsciously or subconsciously! [laughs] So, he really showed us what it meant to be loving, to teach us character and kindness and balance, and I'll try to pass that on to our kids.

Congratulations to you and Chrissy on expecting again! When is the due date?

Early next year. We don’t know when it'll exactly happen. We've always delivered a little bit before the due date, so we'll see.

You’ve been very open, in interviews and on social media, about the loss of your son Jack a little over two years ago. I imagine as you welcome another child, it brings up some complex feelings. In “Living Legend,” you talked about how you and Chrissy’s whole experience with parenthood, pregnancy, and pregnancy loss has given you even more respect than you had before for women — which I liked hearing you say.

Well, you just see how much we ask women to bear, literally and figuratively. And combining that with dealing with misogyny, dealing with lawmakers who are primarily men making rules about what women can and can't do with their bodies, it just makes me even more respectful and in awe of what women have to deal with in this world. That inspired me on my new song “Wonder Woman,” really acknowledging and honoring that sacrifice. We ask women to bear so much in this world, and I want to be part of the change that makes this a better world for my daughter and everyone else's daughters as they grow up.

You've always very politically outspoken, as has Chrissy. In light of Roe v. Wade being overturned, Chrissy went on social media to reveal more details about what had happened with Jack — that it had actually been a late-term abortion — and many commenters were not very empathetic or understanding.

Right. And what she illustrated, and what we talked about even before she spoke up about it, was the difference between a miscarriage and a late-term abortion — there's not really much difference, because most of the time when someone has to end their pregnancy later in the term, it's a pregnancy they wanted and can't have for some reason or another. And so they have to perform an abortion procedure to end it, often so the mother doesn't get infected and possibly die. And that's literally what happened with us. We talked about it as a miscarriage, because it was a pregnancy we lost and she did miscarry, with also an abortion procedure that has to happen to actually terminate that pregnancy to save her life.

And what the takeaway from that is, these decisions are done under so much duress, under so much pain. You're grieving, because you're losing a pregnancy that you really wanted. And in addition to that, you have to make this decision at this moment in your life. And what we know for a fact is that the government has no place in that decision — and we know that from personal experience. And what we realized when Chrissy spoke out about her miscarriage and then subsequently about the procedure, is that so many other moms and so many other families go through this. And so often, it's not talked about. But when the government starts to intrude on these intimate conversations and decisions, it can be a life-or-death experience for the mother. And we wanted to make sure people understood that when they're thinking about who they want making those kinds of decisions, and what kind of politicians we need in office to make sure that women have the freedom to make those decisions with their families and with their doctors. 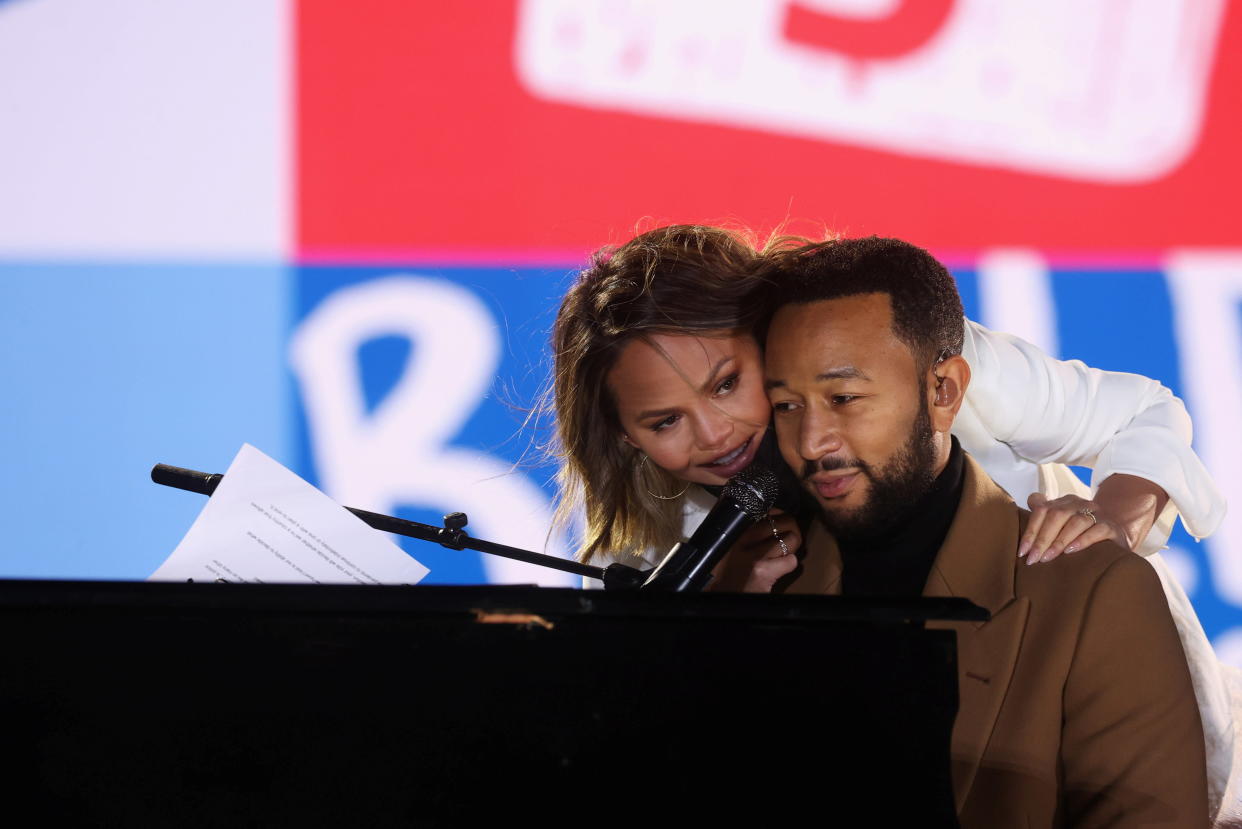 I hope Chrissy did get some positive response online?

Oh, she did. She got a lot of love and support. Like I said, you don't realize how many people go through this until you start talking about it. And then you start to have people come up to her at the grocery store at Target or just when we're out and about, saying how much it meant to them that she said something. Because a lot of times these decisions are made kind of suffering in silence or with very few people knowing about it. People feel alone when they go through that. And I think she's helped people feel less alone.

So, like I said, I've always really appreciated how politically outspoken you are. When I was listening to “Living Legend,” so much of it was about your early career, which meant it featured a lot of memories about Kanye — who of course is on the opposite end of the political spectrum from you now. 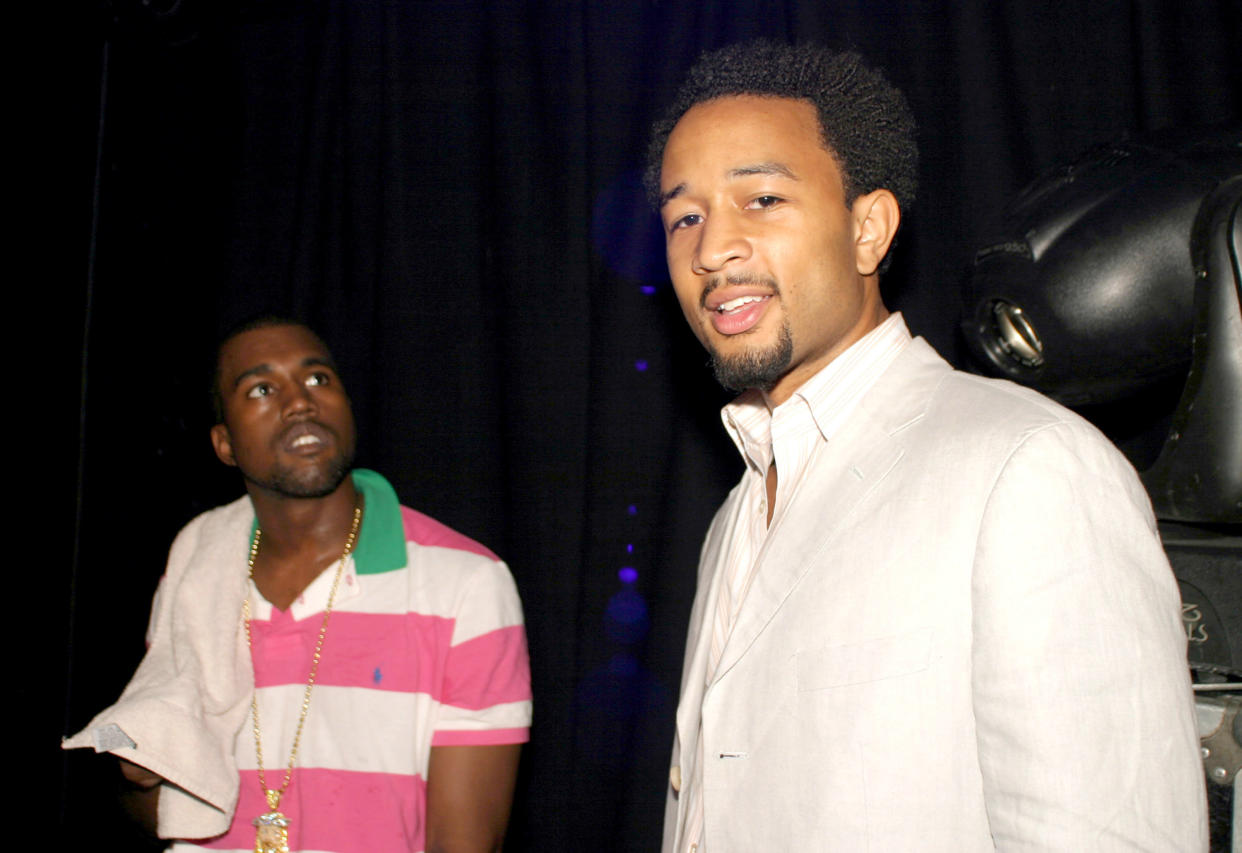 Is that difficult for you? Every day there’s a new awful headline about him — just in the past week or so, he’s been in the news for his shocking comments about George Floyd and his antisemitic remarks. Howard Stern even compared him to Hitler. It must really be hard for you, when Kanye was so instrumental in launching your career.

Well, I don't think about any hardship on me, because I'm doing just fine. I'm feeling the pain of George Floyd's family hearing his name disparaged in the way that it was. I'm feeling the pain of so many Jews in our country and around the world who have been the target of antisemitism for centuries. I’m hearing “Death Con” associated with being a Jewish person in this world. Um, they should not have to feel that. They should not have to hear that. And there needs to be no more fuel on the flames of antisemitism, of anti-Blackness. There's already plenty of that in this world. And for someone to be in a prominent position pouring fuel on those flames is not helpful — and it's dangerous. So, I'm not worried about myself. I'm worried about all the people who could be harmed by that kind of inflammatory rhetoric. 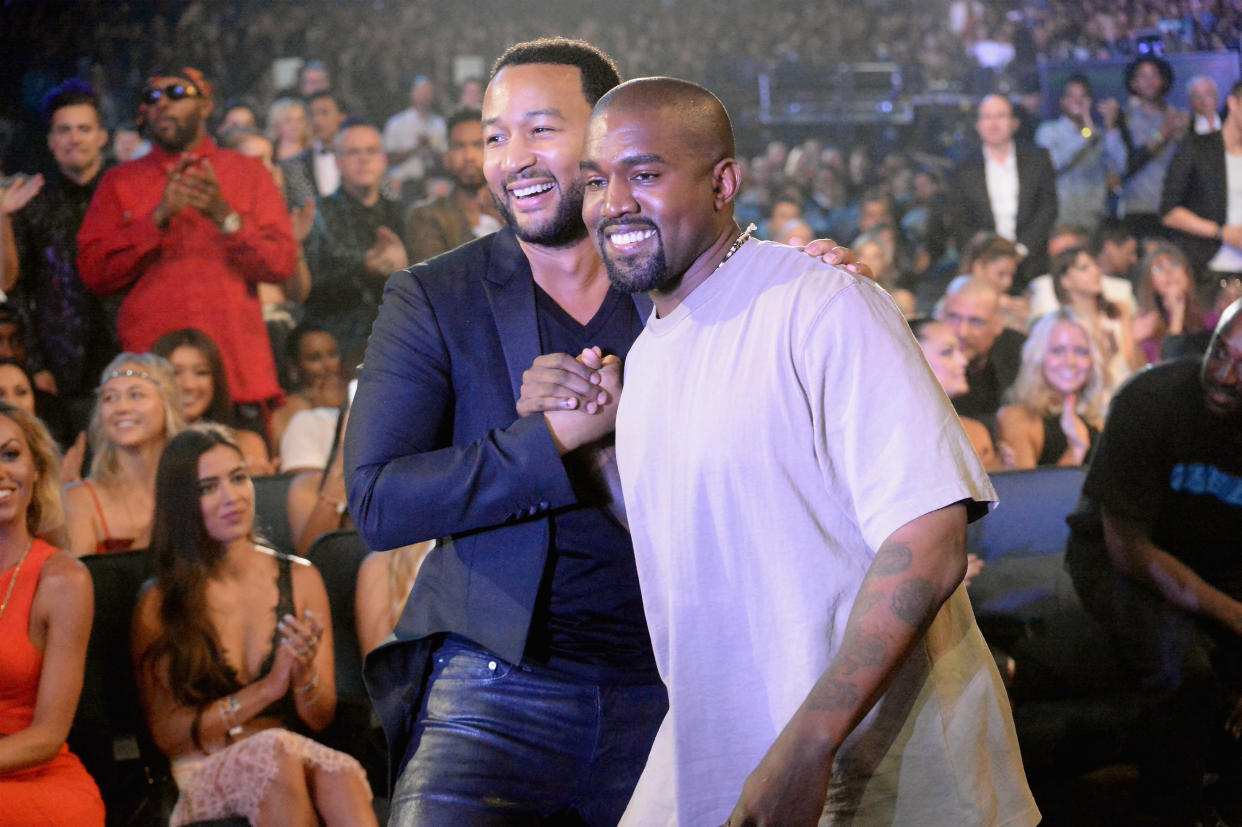 Of course. I meant that, given the fact that your histories are so connected and now you have fallen out, I wonder if it is fraught for you to stand in front of an audience at Ronnie Scott’s and talk about all these good times that you two once shared.

It's not hard; it's my story, and these are the facts. These are things that happened and led us to where we are right now. A lot of people witnessed so much of my ascent and witnessed so much of Kanye's ascent, and there was so much good that we created during that time, together and separately. And nothing he's saying now erases that history. It all exists. It's recontextualized now, I think, but it all happened, and if I'm telling my story, it's part of my story.

Did you see any of the signs back then that he would turn out this way, if you don’t mind me asking?

I didn't, honestly. I didn't see any manifestation of what we're seeing now. Who knows — you know, he's talked about him being bipolar, and I think life events can trigger certain reactions. I think the loss of his mother and in various other events in his life could have exacerbated whatever pre-existing mental conditions he had. But I truly don't know enough to say that. But I do know I find his behavior now quite different from what I thought I knew from him, a decade ago or prior to that. 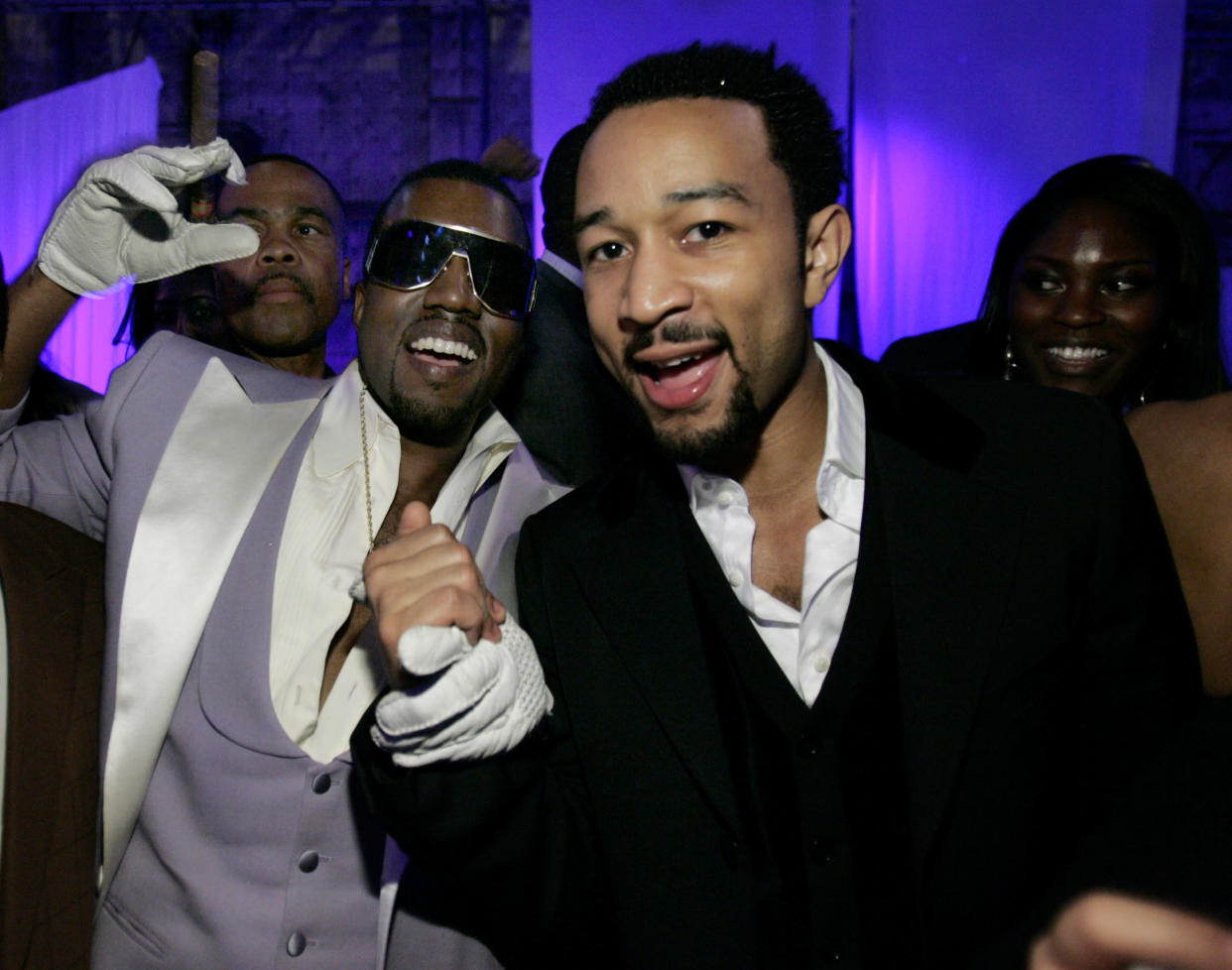 Bringing it back to you and “Living Legend,” like I said, I learned a lot about your history from this Audible — like about your conservative upbringing, being homeschooled and attending a church where women weren’t even allowed to wear skirts above the knee. How did you come to your quite liberal and progressive political beliefs? I don’t know if that was necessarily something you were taught as a kid.

Would you ever run for office one day? I mean that seriously, not as some stunt campaign.Because I might vote for you.

Ha! I really don't want to run for office. I honestly love what I do and I want to keep doing it. I also love the way I'm involved politically: I campaign for people who do want to run for office and fight for laws that I want change. And I feel like I can do that from my current position.