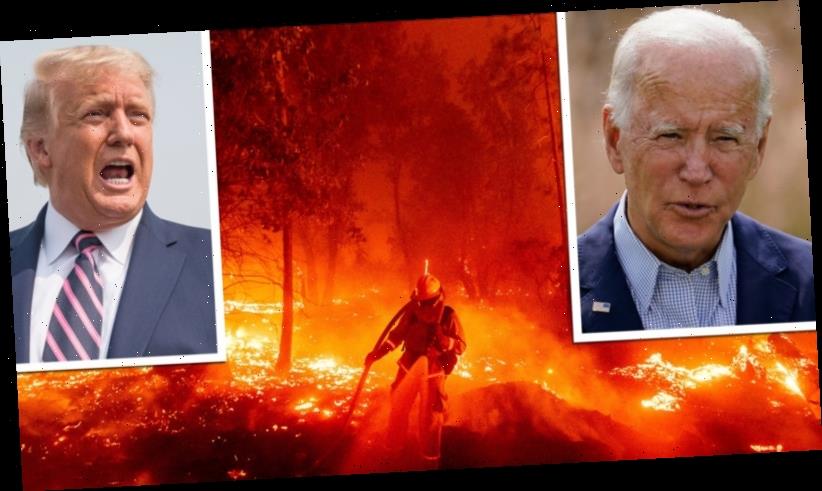 Biden's comment came amid jarring scenes as the US President, face to face with California's governor, dismissed a link between global warming and the worsening fires. 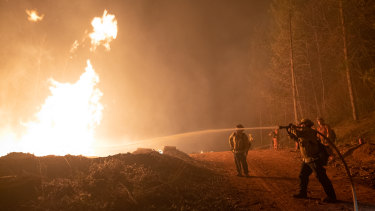 Firefighters douses flames with water during a firing operation to contain the Bear fire in Oroville, California, US.Credit:Bloomberg

"Donald Trump’s climate denial may not have caused the record fires, record floods, and record hurricanes," Biden said in the speech. "But if he gets a second term, these hellish events will become more common, more devastating, and more deadly."

With the presidential election just 50 days away, climate change burst into prominence as an issue on Tuesday (AEST) as the President visited fire-ravaged California and Biden gave a speech on the topic from his home state of Delaware.

More than 3.2 million acres have burned across California this year alone, the largest amount on record. Together, the fires have destroyed at least 4100 structures and forced more than 60,000 people from their homes.

Biden sought to turn the tables on Trump, who has claimed in recent weeks that a Democratic victory in November would lead to violent unrest and a flood of low-income housing developments into America's suburbs. 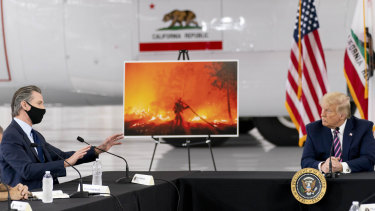 A debate about science: President Donald Trump participates in a briefing on wildfires with California Governor Gavin Newsom.Credit:AP

"If we have four more years of Trump’s climate denial, how many suburbs will be burned in wildfires?" Biden asked.

"If you give a climate arsonist four more years in the White House, why would anyone be surprised if more of America is ablaze?"

Trump has repeatedly said that poor forest management, rather than climate change, was to blame for the fires.

During a visit to McClellan Park, California, Wade Crowfoot, the secretary of California's Natural Resources Agency, warned Trump about ignoring climate science and putting "our head in the sand and thinking that it's all about vegetation management".

"I wish science agreed with you," Crowfoot responded. 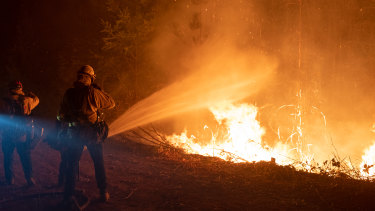 Firefighters douses flames with water during a firing operation to contain the Bear fire in Oroville, California. Credit:Bloomberg

Trump claimed that other countries had not dealt with the same level of fires as California, despite the major blazes in Australia and the Amazon rainforest in recent years.

"We obviously feel very strongly the hots are getting hotter," Newsom said. "The dries are getting drier [and] when we're having heat domes, the likes of which we've never seen in our history.

"We come from a perspective, humbly, where the science is in, and observed evidence is self-evident that climate change is real and that is exacerbating this."

Fires in California have burned over 3.2 million acres of land this year – an area almost as big as some US states. The nearby states of Oregon and Washington have also been ravaged by fires in recent days.

In his speech Biden said: "When Donald Trump thinks about climate change he thinks: 'hoax.' 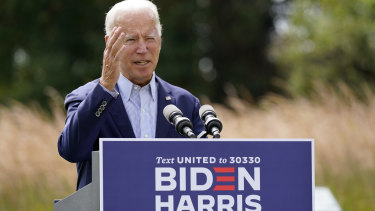 Democratic presidential candidate Joe Biden accused Trump of ignoring the threat of climate change in a speech in Delaware.Credit:AP

Biden has announced a US$2 trillion climate plan that sets a target for achieving net-zero emissions by 2050, make the electricity sector carbon-free by 2035 and launch a major investment in renewable energy manufacturing.

Our weekly newsletter will deliver expert analysis of the race to the White House from our US correspondent Matthew Knott. Coming soon. Sign up now for the Herald‘s newsletter here, The Age‘s here, Brisbane Times‘ here and WAtoday‘s here.

Ivana Trump seen after being branded a "bigot" for immigrants comment