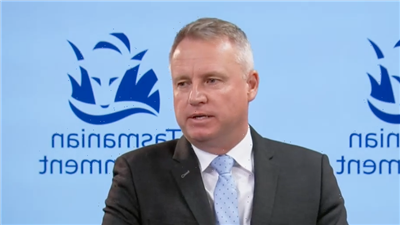 Jeremy Rockliff has been announced as the 47th premier of Tasmania, following Peter Gutwein’s resignation on Monday.

At a press conference on Friday morning, the former deputy premier promised an energised commitment to the needs of Tasmanians and a stable government after multiple cabinet reshuffles in recent months. 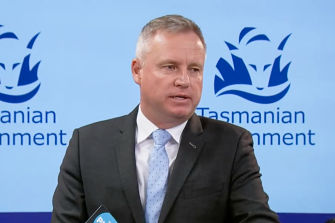 Mr Rockliff said his priorities would centre on innovative reform in education, employment, housing and the state’s healthcare system, but his main focus would be the economy.

“Our key priority is to ensure the economy, the momentum that we’ve built up with over 31,000 jobs that we’ve created over the course of the last eight years, that momentum continues, that investment continues,” he said.

Mr Gutwein announced on Monday he was stepping down from the leadership and leaving politics, citing family reasons and the pressure of governing during the global pandemic.

“That period through Christmas completely drained me … I’ve got nothing left in the tank to give,” he said.

Mr Rockliff, whose electorate of Braddon spans much of Tasmania’s west coast, has been the state’s deputy premier since 2014 and is also the Minister for Health. He has been a Liberal Party member of the Tasmanian House of Assembly since 2002.

Noting his humble farming background and relentless passion for politics, Mr Rockliff said he looked forward to “serving and working for Tasmanians as premier with an energised, a unified and an enormously committed team”.

Minister for Infrastructure and Transport Michael Ferguson is the new deputy premier.

The new leadership team is yet to announce their cabinet, including who will replace Mr Gutwein as treasurer.

The appointment of Mr Ferguson was met with some backlash at Friday morning’s conference. Reporters questioned why Attorney-General Elise Archer had pulled out of the race for the position of deputy premier, despite telling local media she intended to nominate.

“I’m a big fan of Elise’s commitment … but deputy leader positions are the gift of the party room,” Mr Rockliff said.

“We have a very capable team, a very united team, and I’m very proud of them. As I looked around the room this morning, I saw a lot of diversity, a lot of commitment and a lot of energy, and each and every one of them stood for parliament to make a difference.”

While Mr Rockliff said Mr Gutwein would remain a “long-lasting friend”, the new premier said he would establish his own set of priorities and commitments for the state.

“I’m my own person and I will forge my own path,” he said.

He thanked Mr Gutwein for steering Tasmania through “some of the most challenging years” in its history.

“There is absolutely no doubt in my view – and that of all Tasmanians – that he was very committed leader, an inspiring leader, and I wish him all the best,” Mr Rockliff said.