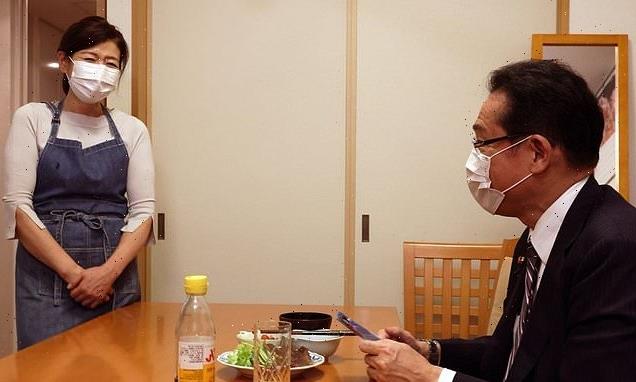 Fumio Kishida has won the race to become Japan’s next prime minister – a year after he bombed out of the contest over an image of him being served dinner by his wife.

Kishida, former foreign minister, was elected leader of the ruling Liberal Democratic Party Wednesday after Yoshihide Suga stepped down after just a year in office.

The win means that Kishida is almost certain to be voted in as the next prime minister at a parliamentary session due to take place next week.

It marks a dramatic turnaround in Kishida’s fortunes, a year after he was beaten to the leadership by Suga after an image of himself and wife appeared online. 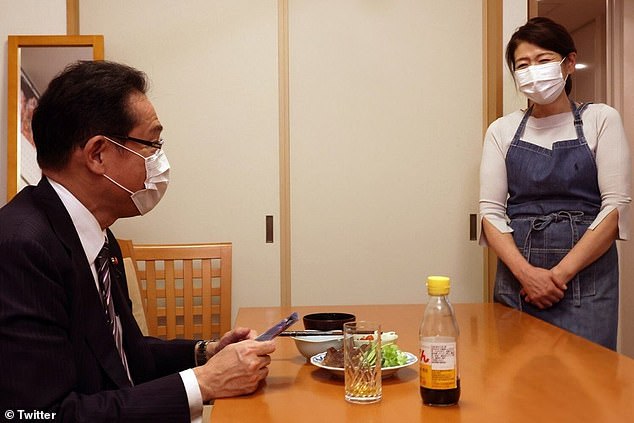 In the picture, Kishida was seated in a suit and tie with his dinner in front of him, while his wife stood nearby in an apron with her arms folded.

Kishida accompanied the image with a note thanking his wife for travelling 500 miles from their hometown to Tokyo to support him while he made TV appearances.

The picture caused a backlash online, where critics accused him of relegating his wife to the position of a ‘maid’.

Others said Kishida, who had been campaigning as the party’s liberal-minded candidate, had ‘allowed the mask to slip’.

But, a year on, he is now seen as a continuity candidate for the party after a year under the deeply-unpopular Suga, who has had the unenviable task of steering the country through the Covid pandemic.

Although he enjoys only moderate popular support and is saddled with a bland image, Kishida drew critical backing from some party heavyweights.

That allowed him to see off competition from outspoken rising star Taro Kono, the minister in charge of the coronavirus vaccine roll-out.

However, there are fears that the Hiroshima lawmaker’s tepid profile could see his party ousted in elections which are due to take place in November.

He focused on populist issues – such as the need to forge a new kind of capitalism and ease divisions of wealth – in his first news conference.

‘We can’t achieve strong growth if wealth is concentrated in the hands of a small group of people,’ he said, citing a need to create a ‘virtuous cycle’ of growth and wealth distribution.

‘We will strive to achieve economic growth and distribution,’ of wealth, Kishida added, promising housing and education aid to address income disparity.

He has proposed a spending package of more than $270 billion, and on Wednesday he said that stimulus must be compiled by the year-end.

Kishida is expected to form a new cabinet and reshuffle the LDP executive in early October.

Parliament’s lower chamber will probably be dissolved in mid-October with an election on either Nov. 7 or Nov. 14, Japanese media said, quoting LDP executives.

‘A win for the establishment. Kishida stands for stability, for not rocking the boat and most importantly, doing what elite technocrats tell him to do,’ said Jesper Koll, expert director at Monex Group.

Kishida’s rival Kono, a fluent English speaker with a large following on Twitter and reputation for being forthright and headstrong, has been seen as something of a maverick and therefore not seen as the top choice of some LDP powerbrokers.

Kono set himself apart from the mainstream of the party establishment on social issues by supporting legislation that would recognise gay marriage, something Kishida has not backed.

Two female contenders, Sanae Takaichi, 60, and Seiko Noda, 61, dropped out of the leadership race after the first round.

Kishida is unlikely to go out on a limb with major policy shifts as Japan seeks to cope with an assertive China and revive an economy hit by the pandemic.

He shares a broad consensus on the need to boost Japan’s defences and strengthen security ties with the United States and other partners including the QUAD grouping of Japan, the United States, Australia and India, while preserving trade ties with China.

Kishida wants to beef up Japan’s coast guard and favours passing a resolution condemning China’s treatment of members of its Uyghur minority. He also aims to appoint a prime ministerial aide to monitor the Uyghur human rights situation.

Kishida was ‘the best possible option for Beijing’, CGTN, the English-language channel of China’s state television CGTV, said in a commentary after the leadership result.

His victory offers an opportunity for relations between the two countries to improve, it said.