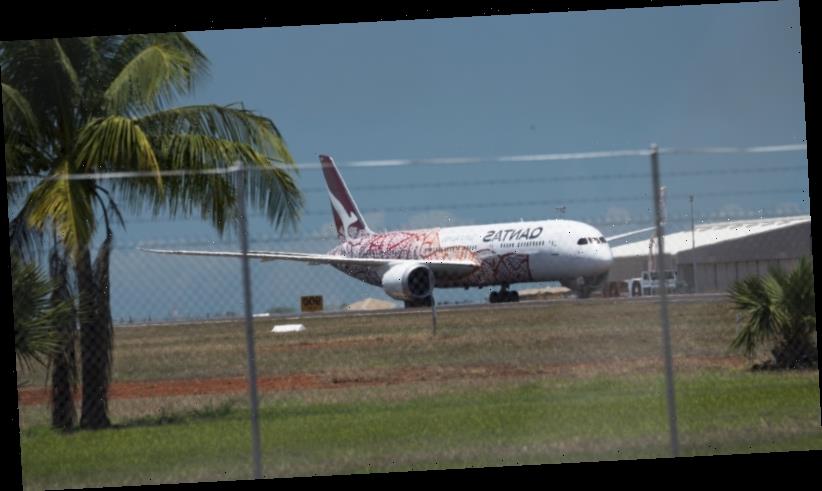 Nearly a third of the 35,000 international travellers who arrived in Australia in December were visitors rather than returning residents, including thousands of Australian expats returning to spend Christmas with their families.

Figures from the Australian Bureau of Statistics show 10,640 incoming passengers marked “visitor” on their entry card in December. That included 2480 Australian citizens – or one in seven of the 17,610 returning Australians that month. 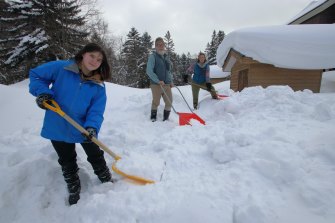 Grace, John and Lucy Morrell at their home in Hokkaido, Japan, digging out their storage shed in preparation for moving back to Australia.

Meanwhile, about 39,000 Australians are stranded overseas during the COVID-19 pandemic, based on the number registered with the Department of Foreign Affairs and Trade as seeking help to return, with about 5000 considered vulnerable.

International airlines are repeatedly cancelling seats for passengers with economy tickets but those who can afford to pay for first or business class tickets are more likely to get flights.

The Sun-Herald and The Sunday Age have spoken to several Australians who live overseas and bought business class flights and paid for hotel quarantine to ensure they could come to Australia for a Christmas holiday.

While some visitors would be travelling to Australia in difficult circumstances such as to visit dying family members or attend funerals, the proportion of visitors did jump significantly closer to Christmas. In the June quarter, 18 per cent of arrivals were visitors – including both citizens and non-citizens; in the September quarter, it rose to 25 per cent and in the December quarter it was up to 31 per cent.

A federal government spokesperson said it was doing everything it could to assist Australians overseas to return.

“The government prioritises facilitated flights where the need is the greatest based on registrations of Australians in vulnerable situations and the availability of commercial flight options,” the spokesperson said.

He said DFAT had helped over 41,000 Australians return since March 2020 when the pandemic began, including more than 15,000 people on 109 government-facilitated flights.

Andrew Giles, Labor’s assisting spokesperson for immigration and citizenship, said Australians would not be competing to come home if the government had acted on the recommendations of Jane Halton’s expert report into national quarantine. 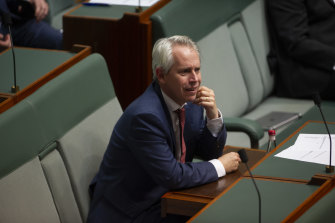 Labor MP Andrew Giles said Australians should not be pitted against other Australians for repatriation.Credit:Dion Georgopoulos

″We should not be pitting Australian against Australian for the chance to get home during this pandemic,” Mr Giles said.

″It’s not fair on so many Australian families who have struggled to find the means to secure seats on a flight home.

“If Scott Morrison had followed Jane Halton’s expert advice to establish a safe, equitable and sustainable national quarantine system and kept his promise and gotten the stranded Aussies home by Christmas, we wouldn’t be in this mess.”

However, the government spokesperson said it had set up the Howard Springs quarantine centre in the Northern Territory in response to the Halton report and organised a number of repatriation flights. The government has also announced plans to double the capacity at Howard Springs.

The ABS figures show most international arrivals in December were residents who had been stuck abroad and were finally returning for good, including 15,010 Australian citizens and 6150 non-citizens that included permanent residents and New Zealanders. 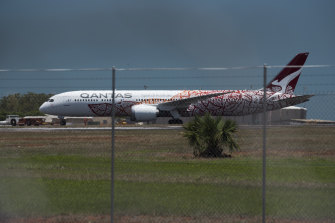 The federal government has arranged repatriation flights for stranded Australians to get home. Credit:Lisa McTiernan

There were also 2890 permanent arrivals, which means people moving to Australia for the first time, mostly migrants with permanent visas but also Australian citizens born abroad and New Zealanders with the right to live here without a visa.

NSW has consistently taken the lion’s share of international arrivals, the ABS figures show. In the three months to December 31, it took more than half of the 87,710 international travellers. In the September quarter, at the height of the Victorian lockdown, NSW took nearly two thirds of the 48,400 arrivals.

Since July travellers have paid for hotel quarantine – $3000 for the first adult, $1000 for additional adults and $500 for children aged between 3 and 18 – but the NSW government says this is merely a “contribution” towards the cost, which includes police and and health officials as well as accommodation and food. The states agreed last April that the net costs of quarantine accommodation would be reconciled among states and shared according to residency of persons.

The Victorian government has confirmed it will pay $34.3 million to NSW to cover the cost of accommodating Victorians in hotel quarantine but the Queensland government is so far refusing to pay, insisting it will only transfer the $30 million it owes to NSW once the federal government approves its proposed pop-up quarantine hub near Toowoomba.

The federal government spokesperson said as of February 15, NSW has been receiving 3010 passengers a week, Queensland 1000, South Australia 530, Western Australia 512, with individual arrangements for the ACT, the Northern Territory and Tasmania. Victoria is not currently receiving international flights.

Lucy Morrell, her husband John and daughter Grace, 12, are hoping to fly from Japan to Sydney in April, before moving back to their home in the NSW Snowy Mountains.

Ms Morrell said they are not officially stranded yet because this will be their first attempt to repatriate but she is nervous about their chances because they are trying to fly economy. In preparation to travel, the family will need to pay the equivalent of $1000 to have the COVID-19 tests required to fly.

Ms Morrell said all Australians have a right to enter the country, even if it’s only for a holiday, but she wants more transparency about who is arriving.

“I understand that people have a right to enter Australia for business or repatriation or visit but without transparent reporting, stranded Australians are accused of causing our own problems by not coming home yet,” Ms Morrell said.

“We are lost in the crush of people entering Australia and for the most part, we have the fewest resources to buy the expensive tickets that will see us land in Australia.”

Ms Morrell said if Australia planned to continue with travel caps, it should consider having separate caps for visitors, repatriating Australians, business travellers and so on, and running separate quarantine options.

Canelo vs. Yildirim PPV price: How much does it cost to watch Canelo Alvarez’s fight on DAZN?
World News