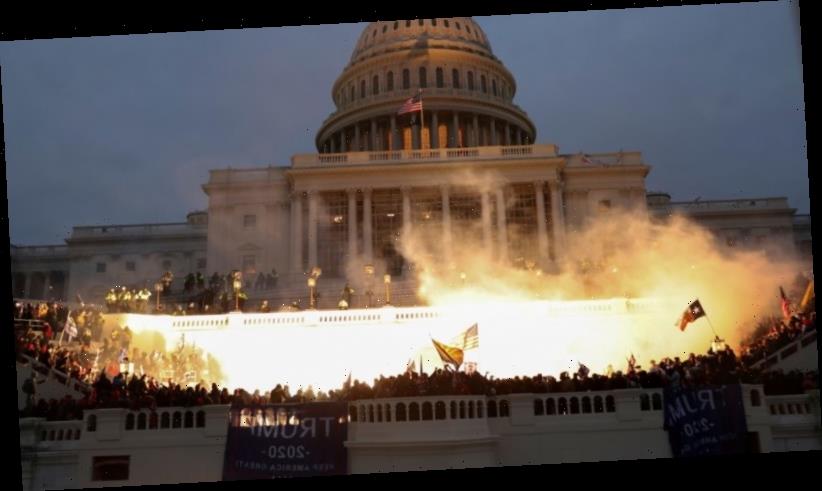 It was a chilling warning, one week after the insurrection that shook America.

On January 13, federal agencies issued a joint intelligence briefing declaring that this month’s siege of the US Capitol could end up being a “significant driver” for further violence by right-wing domestic extremists. 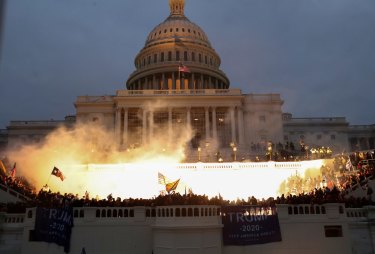 An explosion caused by a police munition is seen while supporters of US President Donald Trump storm the Capitol building. Credit:Reuters

According to the memo, many of the groups who stormed the Capitol had been emboldened by the breach, fuelling fears of attacks – not just at Joe Biden’s inauguration, but in the weeks and months after Donald Trump leaves the White House.

The message was clear: even after Biden is sworn in as the nation's 46th president, angry extremists who believe their election was stolen will remain a threat for a long time to come.

Extremist groups have always been part of America’s social fabric, but under Trump they found a common ally and cause. 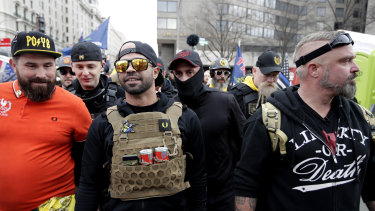 Supporters of President Donald Trump who are wearing attire associated with the Proud Boys watch during a rally at Freedom Plaza.Credit:AP

Some, like the white nationalist group the Proud Boys were buoyed by Trump during last October’s presidential debate, when he famously told them to “stand back and stand by”. Within hours of the statement, Trump's incendiary phrase was added to the group's online logo and merchandise.

Others, like the QAnon conspiracy theorists who view the President as a hero battling “deep state” Satanists and paedophiles, have turned to the dark recesses of the internet to elevate their fantasies to a movement.

There were warnings: members of the militia group the Wolverine Watchmen were arrested by the FBI last October over an extraordinary plot to kidnap Democratic Governor Gretchen Whitmer, whom Trump had earlier attacked for imposing COVID-19 restrictions on her state.

Data from the Centre for Strategic and International Studies, a US think-tank based in Washington, found that during the first eight months of 2020, most domestic terrorism plots and attacks came from the far-right – substantially more than far-left or militant jihadist groups.

Boiled down, white supremacists and other like-minded extremists hatched 67 per cent of the terrorist plots and attacks in the US last year, targeting demonstrators and individuals because of their racial, ethnic, religious or political make-up.

But while the number of fatalities from homeland terrorist attacks remained relatively small, the centre also warned that the level of violence could increase this year, depending on factors such as political polarisation, COVID-19 or growing concerns about immigration. 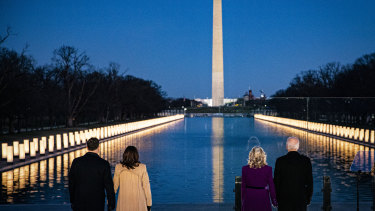 US President-elect Joe Biden, from right, wife Jill Biden, US Vice-President-elect Kamala Harris and husband Douglas Emhoff stand at the Lincoln Memorial Reflecting Pool on the eve of the inauguration. Credit:Bloomberg

The FBI says it has scrutinised militia groups such as the Proud Boys, Three Percenters (a pro-gun, anti-government paramilitary group) and the Oath Keepers (who believe themselves to be "the last line of defence against tyranny").

One apparent Oath Keeper leader Thomas Edward Caldwell, a 66-year-old former navy veteran, was charged alongside two others with conspiracy on Tuesday (Wednesday AEDT) – the first such charges laid in connection to the siege on the Capitol on January 6.

The FBI released alarming details of what it said were Caldwell's messages during the riots.

“All members are in the tunnels under the capital,” the FBI quoted Caldwell messaging to others. “Seal them in turn on gas.”

Federal authorities have also warned about the potential for ongoing violence by the Boogaloo Bois – a loosely organised anti-government group with a tendency to show up to Black Lives Matter protests – and "others who seek a politically motivated civil war". 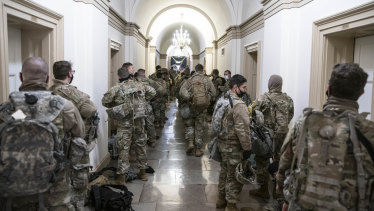 Members of the National Guard assemble in a hallway of the US Capitol building in Washington.Credit:Bloomberg

On Monday, members of the movement took part in an annual gun rights rally in Richmond, Virginia, brandishing rifles and voicing claims that the new Biden administration would threaten their right to bear arms.

And in yet another troubling sign, 12 National Guard members deployed to Washington for inauguration duties were removed as part of a security vetting process designed to ensure troops did not have ties to extremist groups.

According to The Washington Post, at least two of the service members had “possible sympathies” for anti-government groups, while others were flagged for inappropriate behaviour during standard background checks.

“While we have no intelligence indicating an insider threat, we are leaving no stone unturned in securing the capital,” acting Secretary of Defence Christopher Miller said in a statement on Tuesday.

Amid fears of another insurgency, Washington now resembles a fortress. Fences with razor wire surround the Capitol complex; about 250,000 national troops have been deployed; and most of downtown DC has been cordoned off to prevent cars and people from entering.

State governors have also fortified their Capitol buildings or called in the National Guard, heeding the FBI’s earlier warnings of localised protests.

In Indiana, the home state of outgoing Vice-President Mike Pence, legislative activity has been cancelled for the week. In Michigan, the group that manages the state's Capitol voted to ban the open carry of firearms in the building.

Whether another notable attack takes place this week is yet to be seen, and some far-right groups are warning members not to attend pre-planned events for fear they could be “federal honey pots”.

“We won’t sit on our hands for the next four years but we can pick and choose our battles moving forward,” Proud Boys leader Enrique Tarrio recently wrote on the encrypted messaging app Telegram.

“This will be a psychological problem in America for years to come.”

Understand the election result and its aftermath with expert analysis from US correspondent Matthew Knott. Sign up to The Sydney Morning Herald‘s newsletter here, The Age‘s here, Brisbane Times‘ here and WAtoday‘s here.

Joe Biden's cousin praises him for overcoming 'adversity' in life