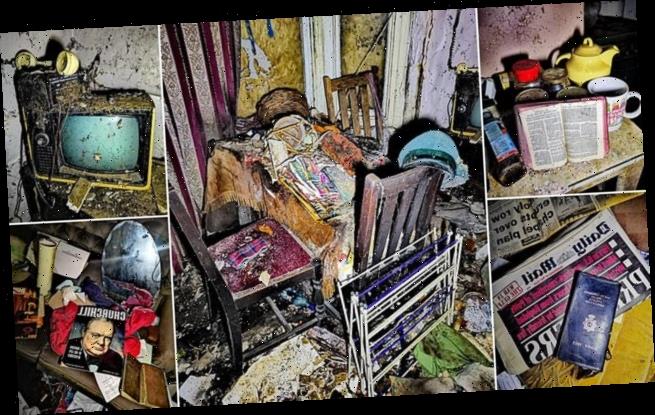 Inside the House of Sadness: Eerie shots from untouched abandoned home

Inside the House of Sadness: Rotting time warp home not touched since its previous owner died in bed alone 17 years ago is still full of old newspapers, grimy tins of food and once-loved keepsakes

These are the chilling images which show a house lost in time, overgrown with dust and grime having been abandoned for almost 20 years.

Relics of yesteryear still sit within this small home in Hirst Courtney, north Yorkshire, creating an eerie atmosphere as if its since deceased owner had never left.

A copy of the Daily Mail, carrying the date March 24, 2003, indicates when the property was last lived in, as nature has already started to reclaim the building from top to bottom.

A set of false teeth belonging to the once home owner, a single window, still rest above a decaying bathroom sink as her walking frame stands in the room next door. 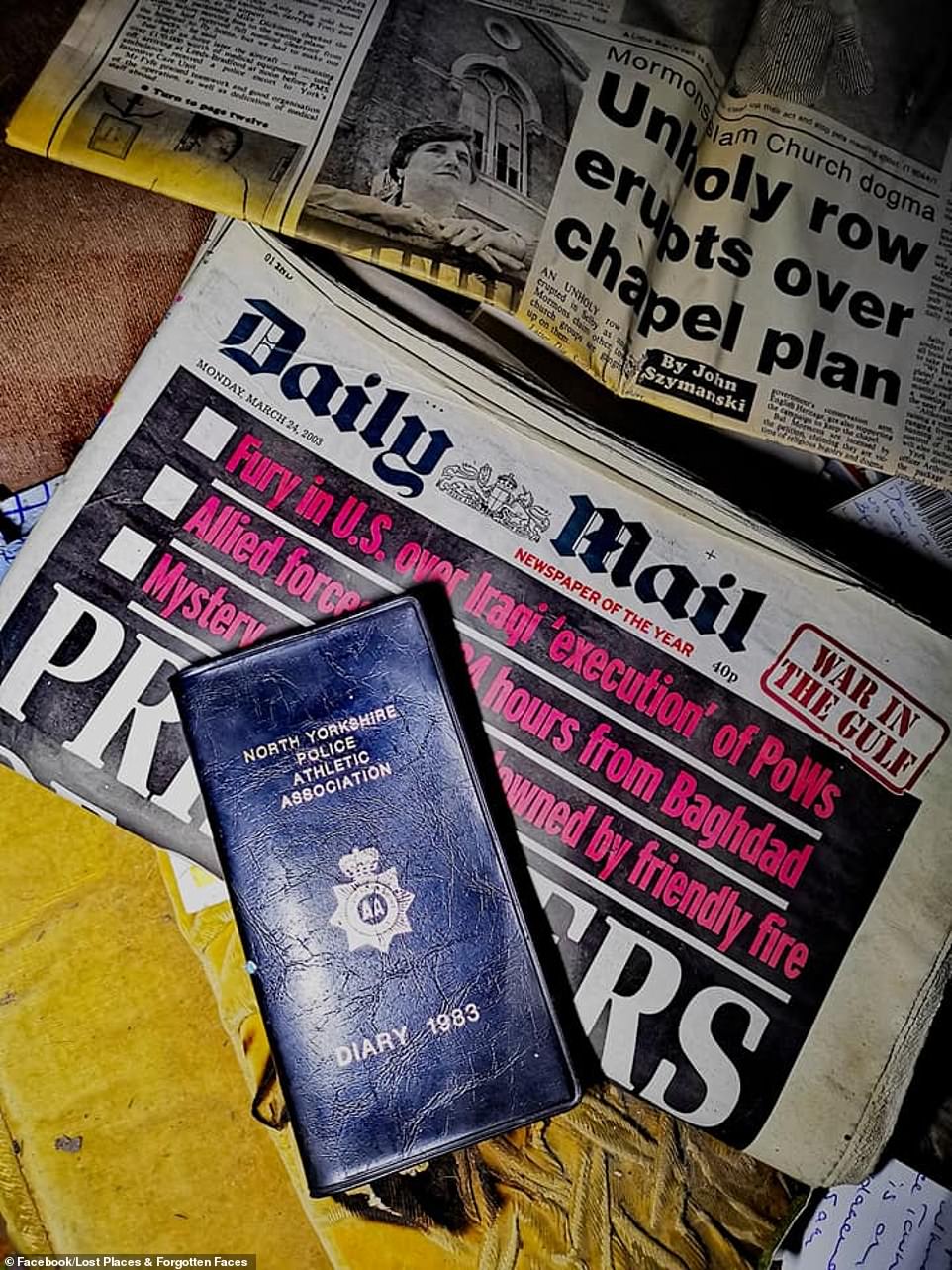 Relics of yesteryear still sit within this small home in Hirst Courtney, north Yorkshire, with a copy of the Daily Mail from March 2003 left sitting on the side. It reflects how the home was left shortly before the owner passed away 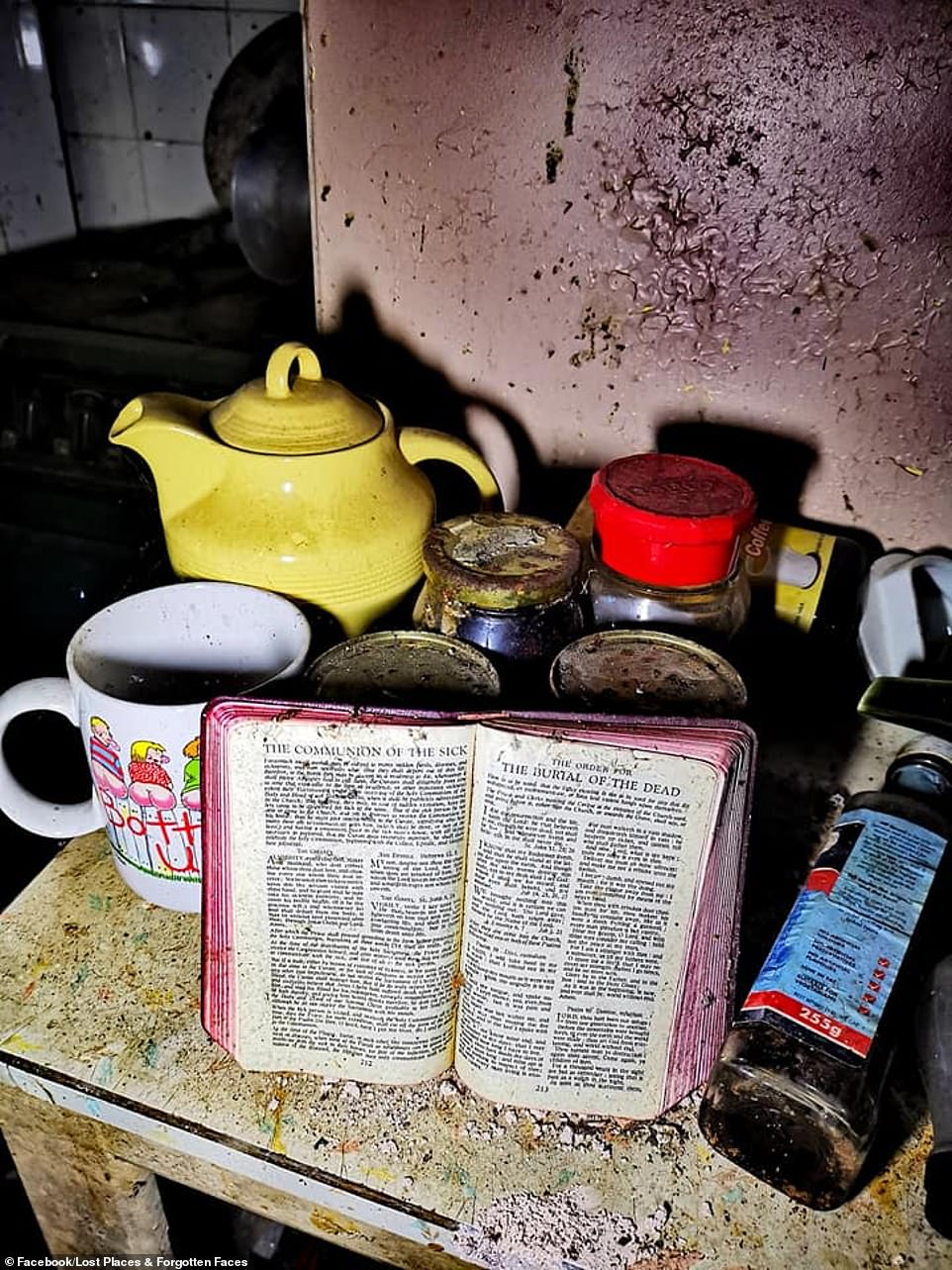 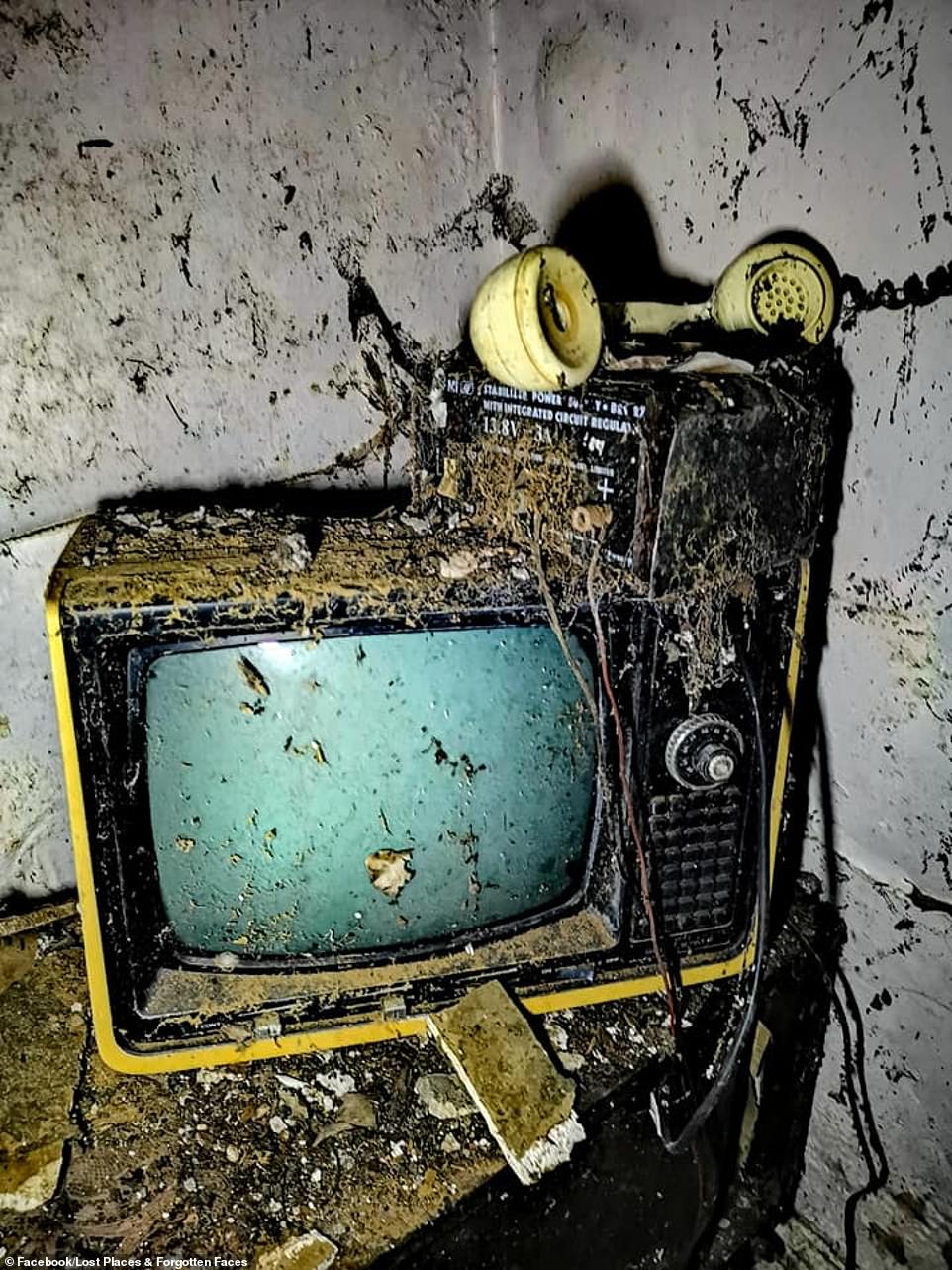 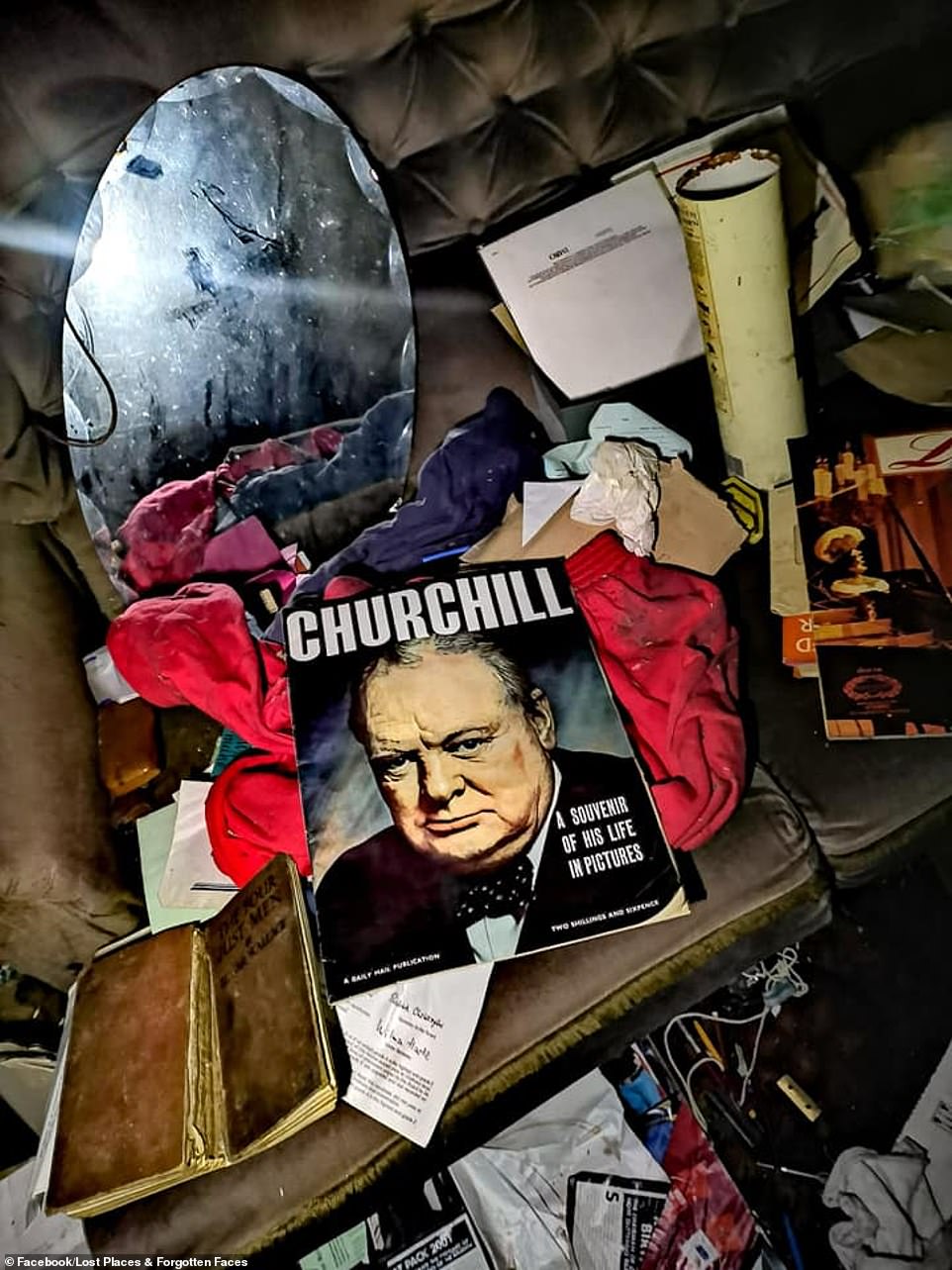 Belongings and keepsakes are scattered throughout the property creating an eerie atmosphere as if its since deceased owner had never left. Here a souvenir pull-out commemorating the premiership of Winston Churchill is seen

On a dusty side unit, among cracked tea cups and an aged yellow teapot, a prayer book can be seen left open with its pages weathered and well read.

The incredible yet spooky images were captured by an explorer who seeks out abandoned buildings, to document their findings on a ‘Lost place & Forgotten Faces’ Facebook page.

An extraordinary find, the property has been dubbed ‘The House of Sadness’ by the explorer, who gives verdicts on each abandoned and derelict place they visit.

Located approximately seven miles south of Selby, the small house has not been lived in since 2003, after the former owner passed away inside the property.

The house is believed to have been inherited by her son, who has never cleared out the property following the funeral of his mother. He is also believed to live overseas, giving explanation for the home’s abandoned state.

‘A woman lived there alone after her husband died,’ the explorer outlined alongside the gallery of images.

‘Documents within the house state her name was Ann Harrison, and her date of birth was 24th August 1930, indicating she died alone in the house in 2003, aged only 73.’ 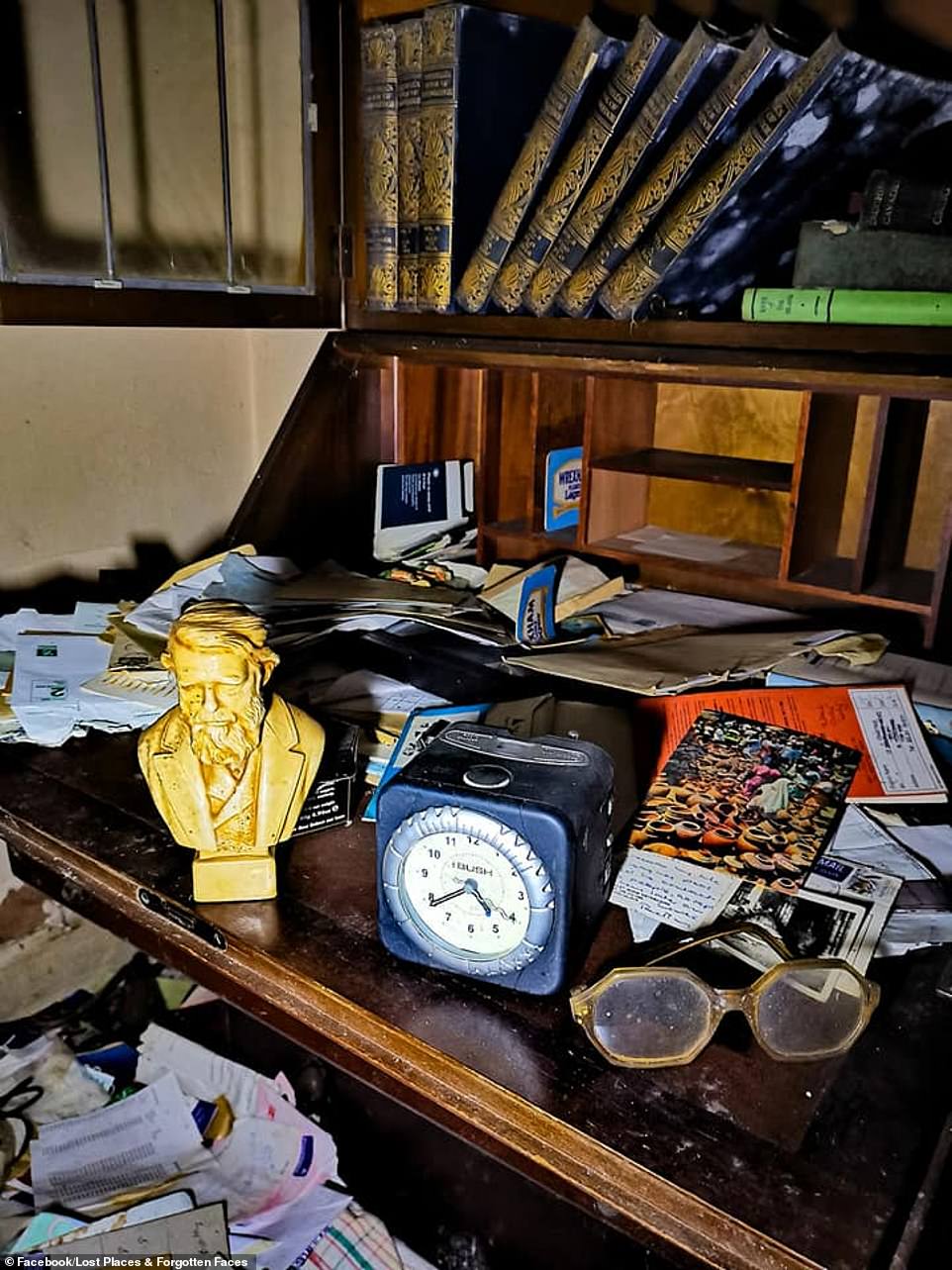 A writing bureau is seen still covered in items, including old keepsakes and the spectacles belonging to the former owner 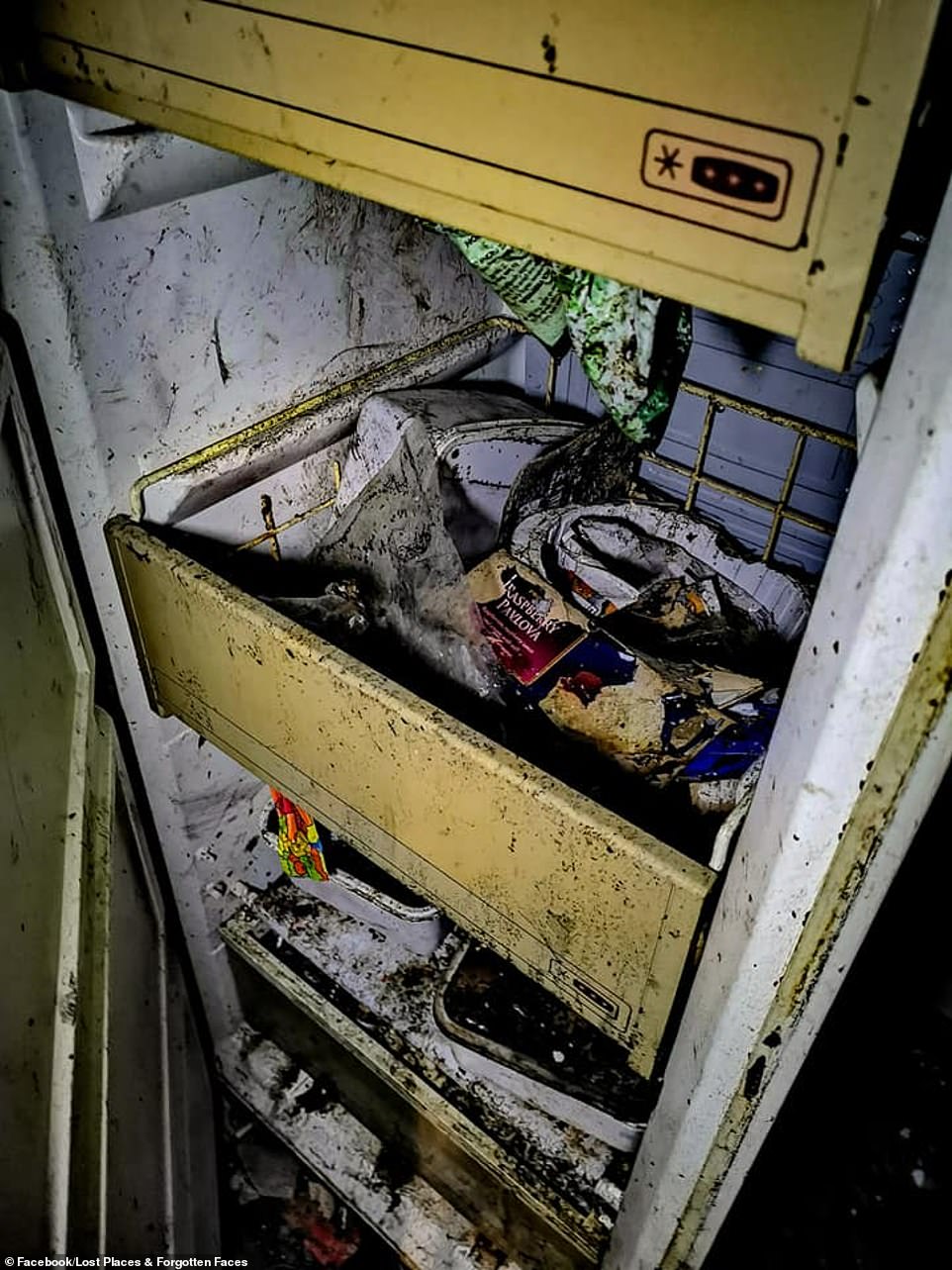 Grime has built up in the crevice of the building, reflecting almost 20 years of neglect since its abandonment 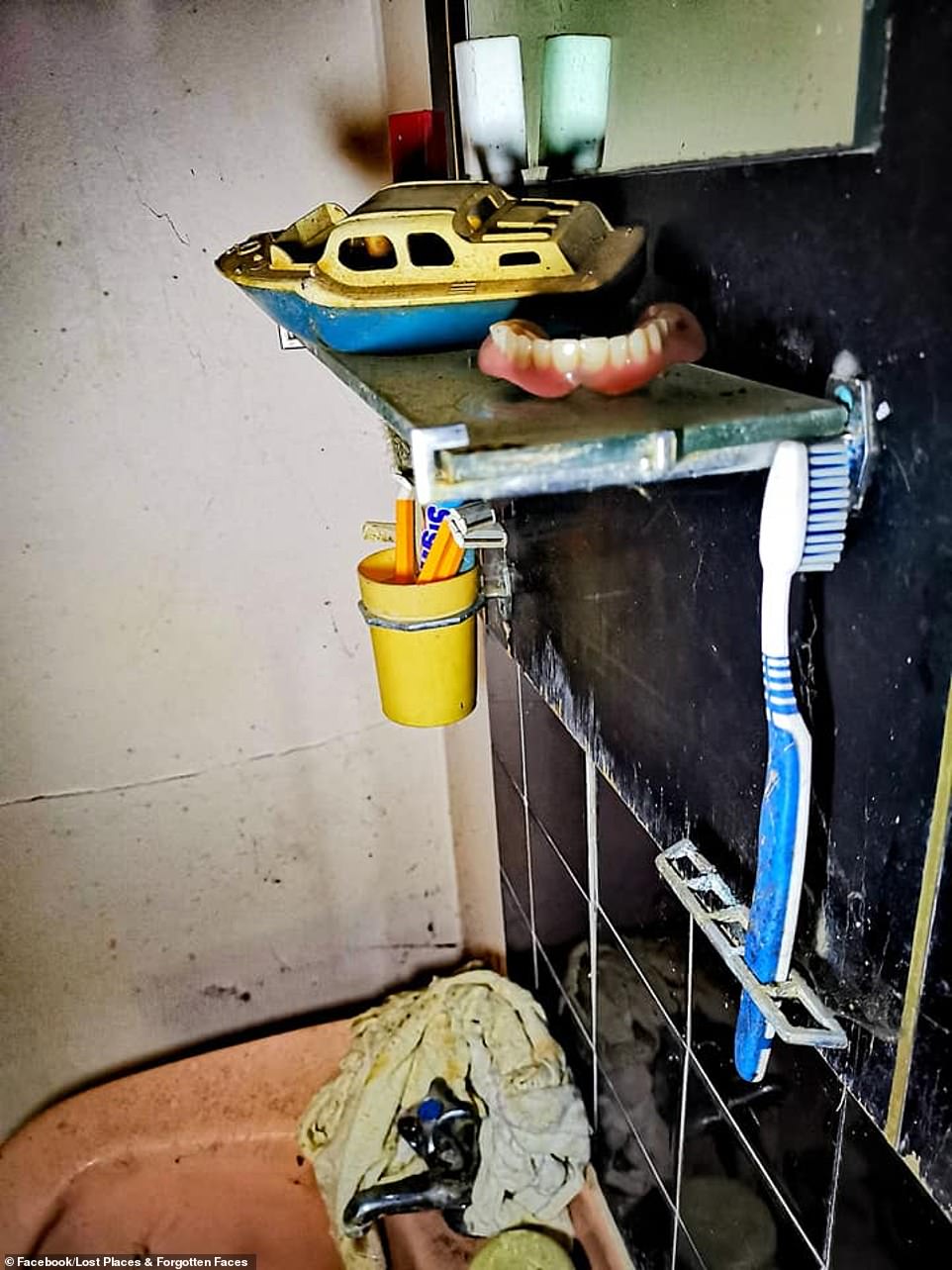 The false teeth of the owner can be seen resting on a decaying bathroom shelf, while a small plastic toy boat gives indication that the elderly lady sometimes had grandchildren over to visit her. A toothbrush, in good condition, is also seen stored 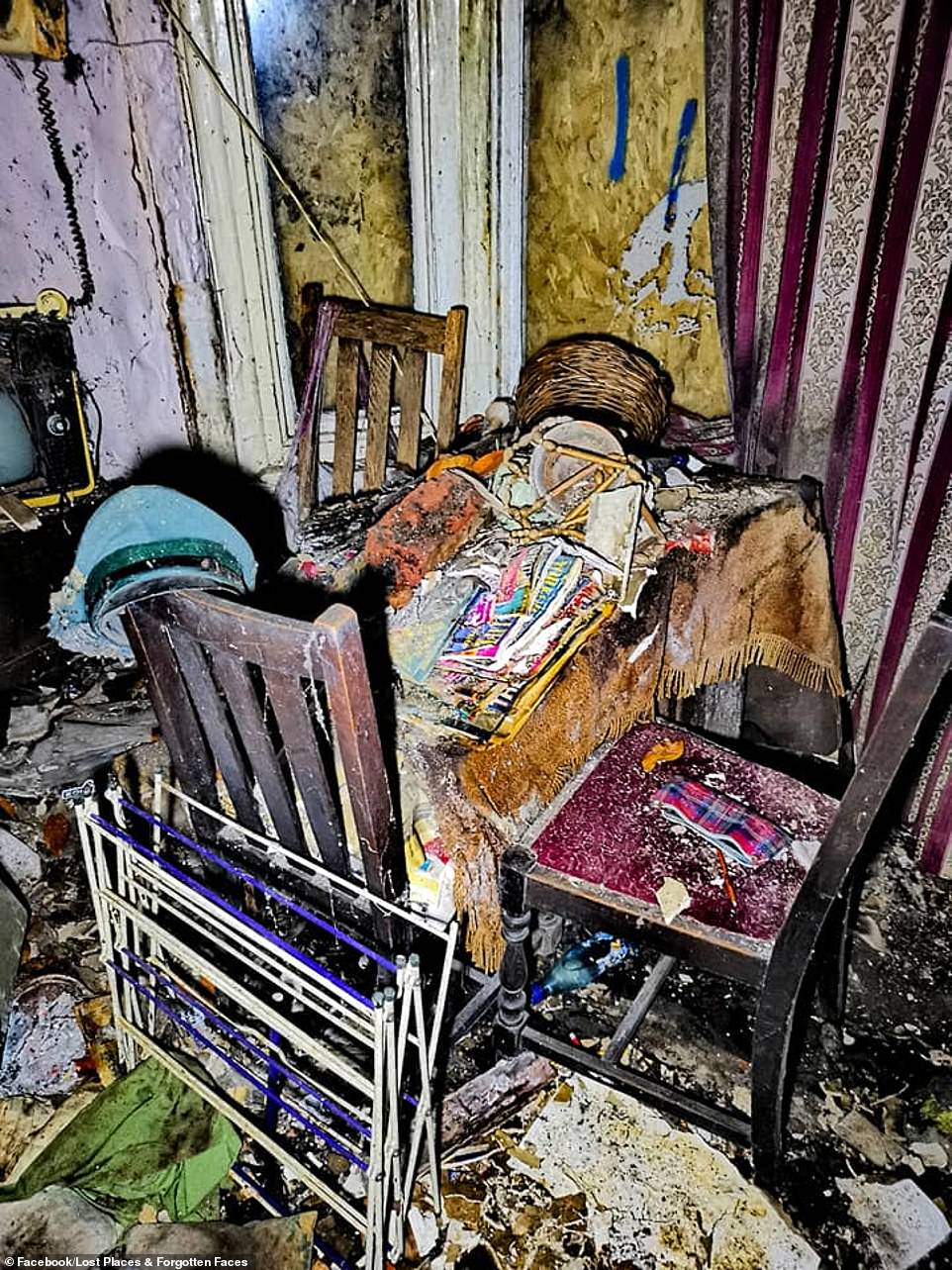 The rotting wooden dining table had folded in on itself, giving way to the mass of clutter and grime which has built up 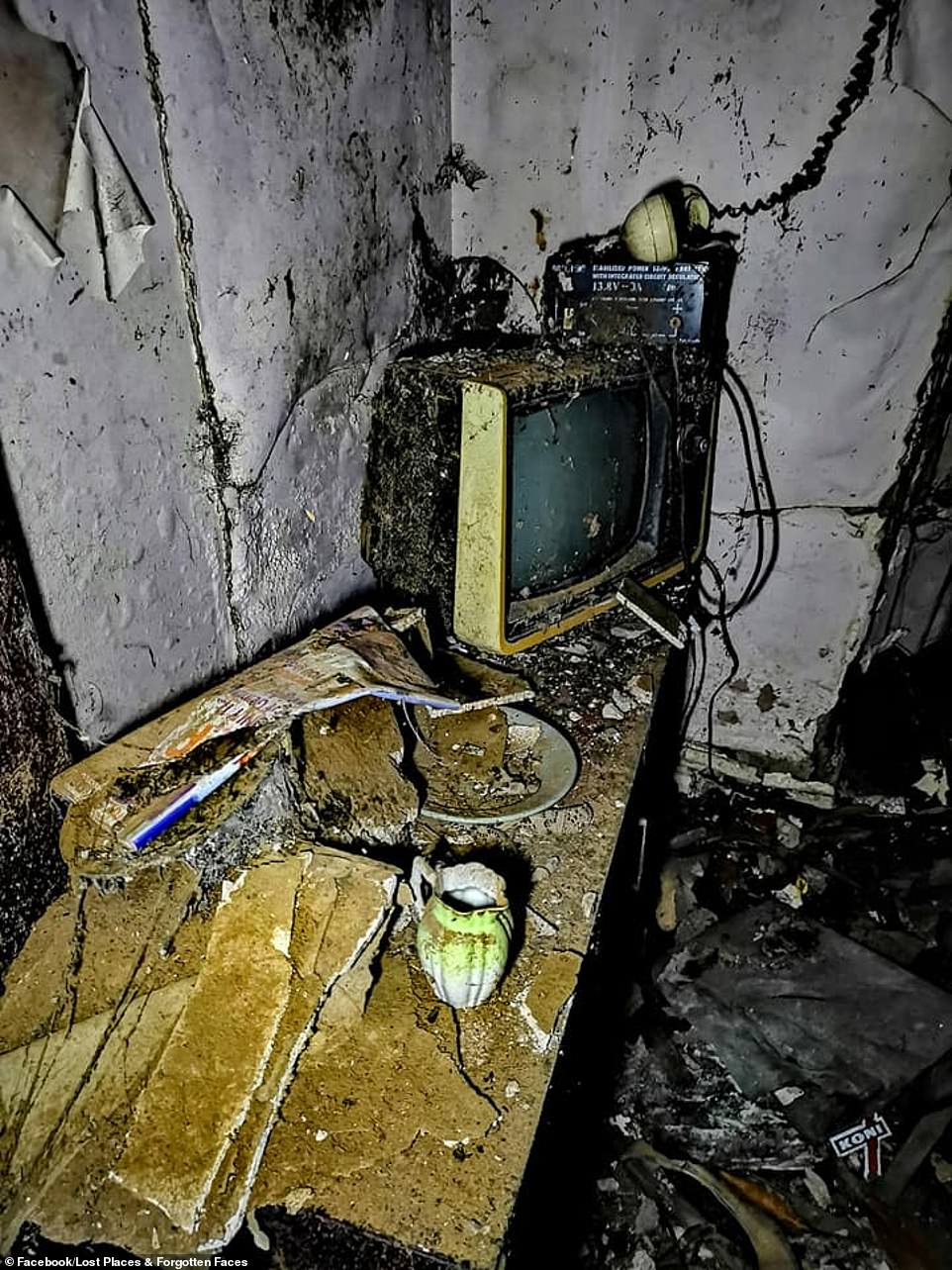 An old-fashioned television unit was teeming with gunge, while a similarly dated telephone sat atop it. The drawer set on which they rest can be seen to be crumbling away, weathered by the passing of time 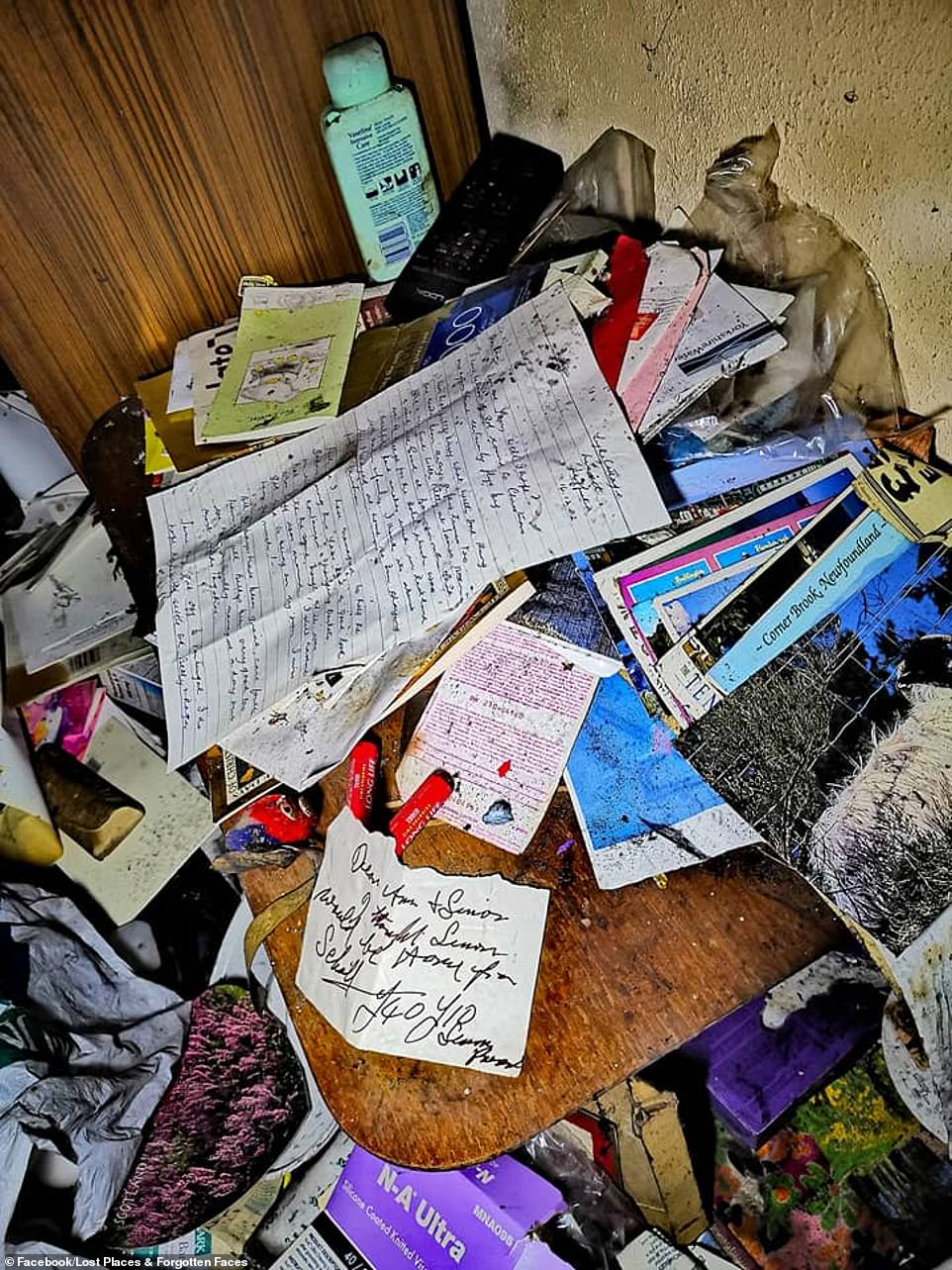 Letters and cards are strewn across another table, along with items of clothings and lotion bottles. It is believed the son of the owner inherited the house, but opted to never come and clear the property out 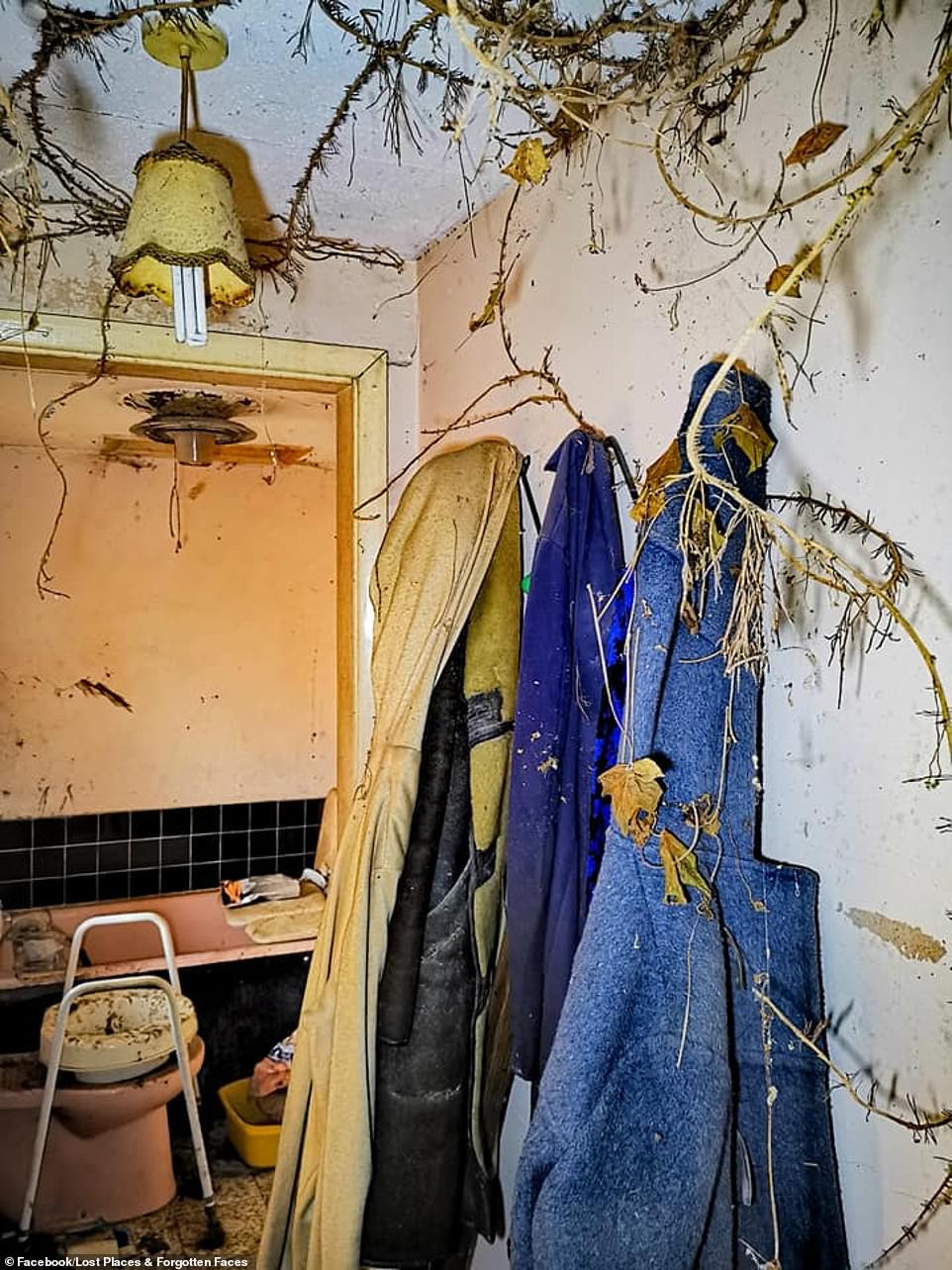 Vines have grown throughout the property as nature takes its natural role and reclaims abandoned land. In a eerie scene, the woman’s dressing gown has still be seen draped over the back off the door, as though ready for use 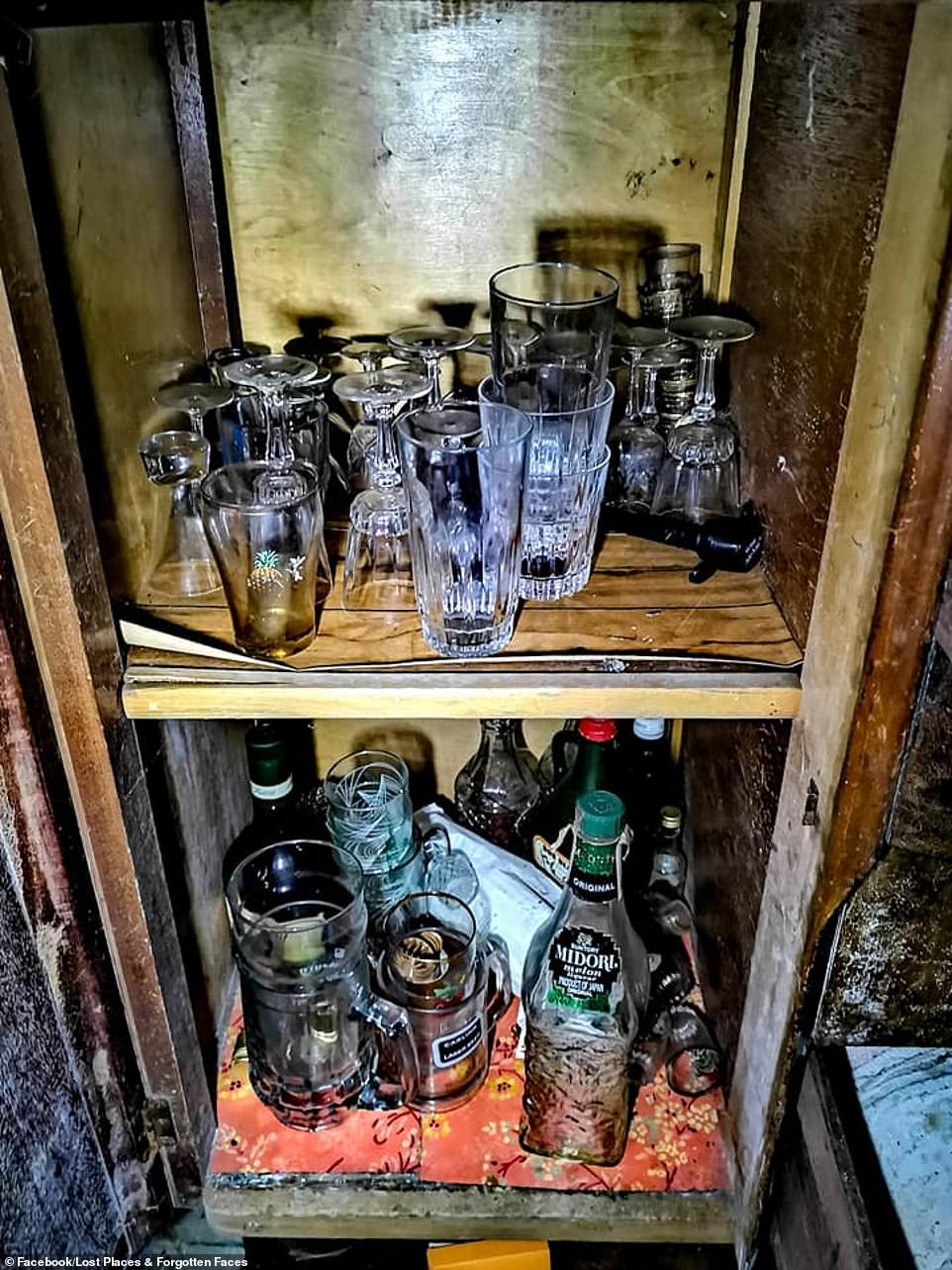 A creaky cupboard revealed a sizeable glass collection and several bottles of cognac, leading the explorer to conclude that the previous owner ‘enjoyed a tipple’ while living alone in the house 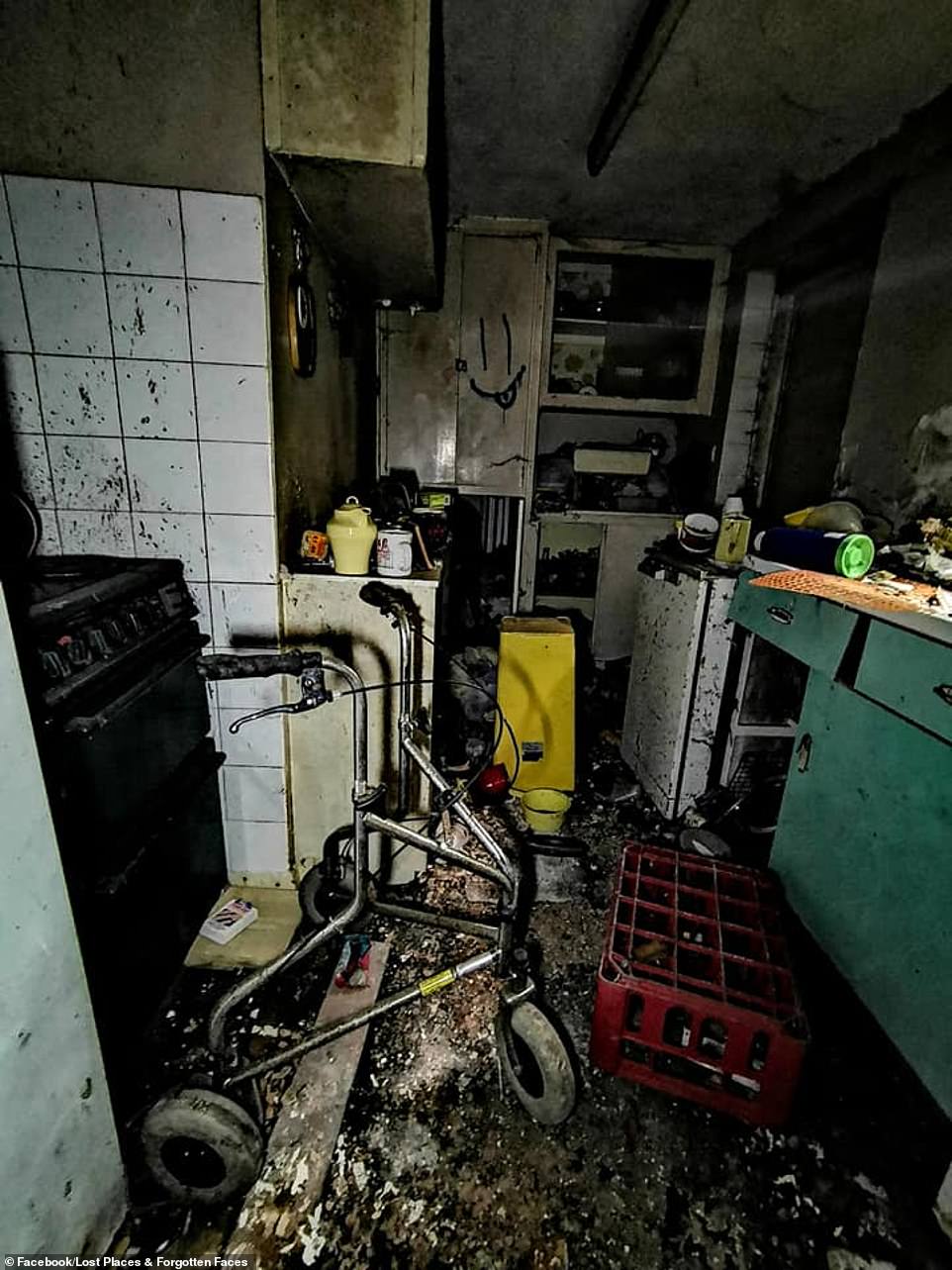 A carpet of filth has built up on the kitchen floor, while the walker that the lady depended upon can also be seen abandoned 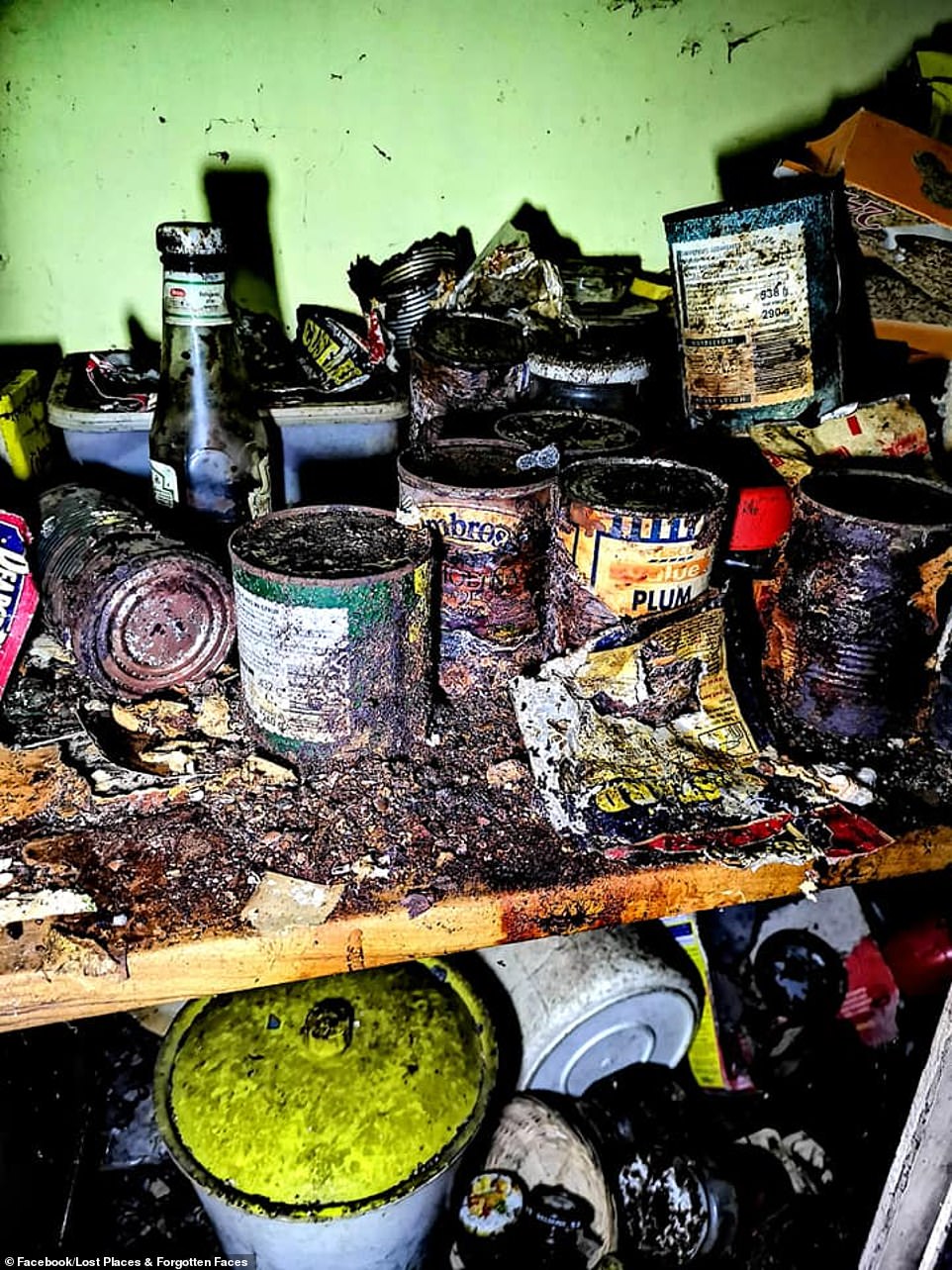 A collection of tinned foods can be seen in one image, shrouded in a coat of mould and grime. They indicate the simple diet of the woman as she went about daily life on her own

A collection of tinned foods can be seen in one image, shrouded in a coat of mould and grime. They indicate the simple diet of the woman as she went about daily life on her own.

The house is a time-capsule of old artefacts, ornaments, photographs, wedding albums, calendars and newspapers cut-outs of a bygone era.

After searching the bedroom, the explorer noted the woman’s clothes are still hanging up in her wardrobe, while her dressing gown still drapes on the back of the door ready for use.

The explorer, who wishes not to be officially named, added: ‘There are children’s toys and teddies upstairs, which tells me that maybe her grandchildren would once come and visit her. There are also a number of empty, vintage cognac bottles found throughout, so it’s fair to say she enjoyed a tipple once in a while!

‘The house had been set up with assisted living handles to help her get around. The stairs leading to the upper floor were worryingly steep, and one can only imagine the struggle she would have getting up there. 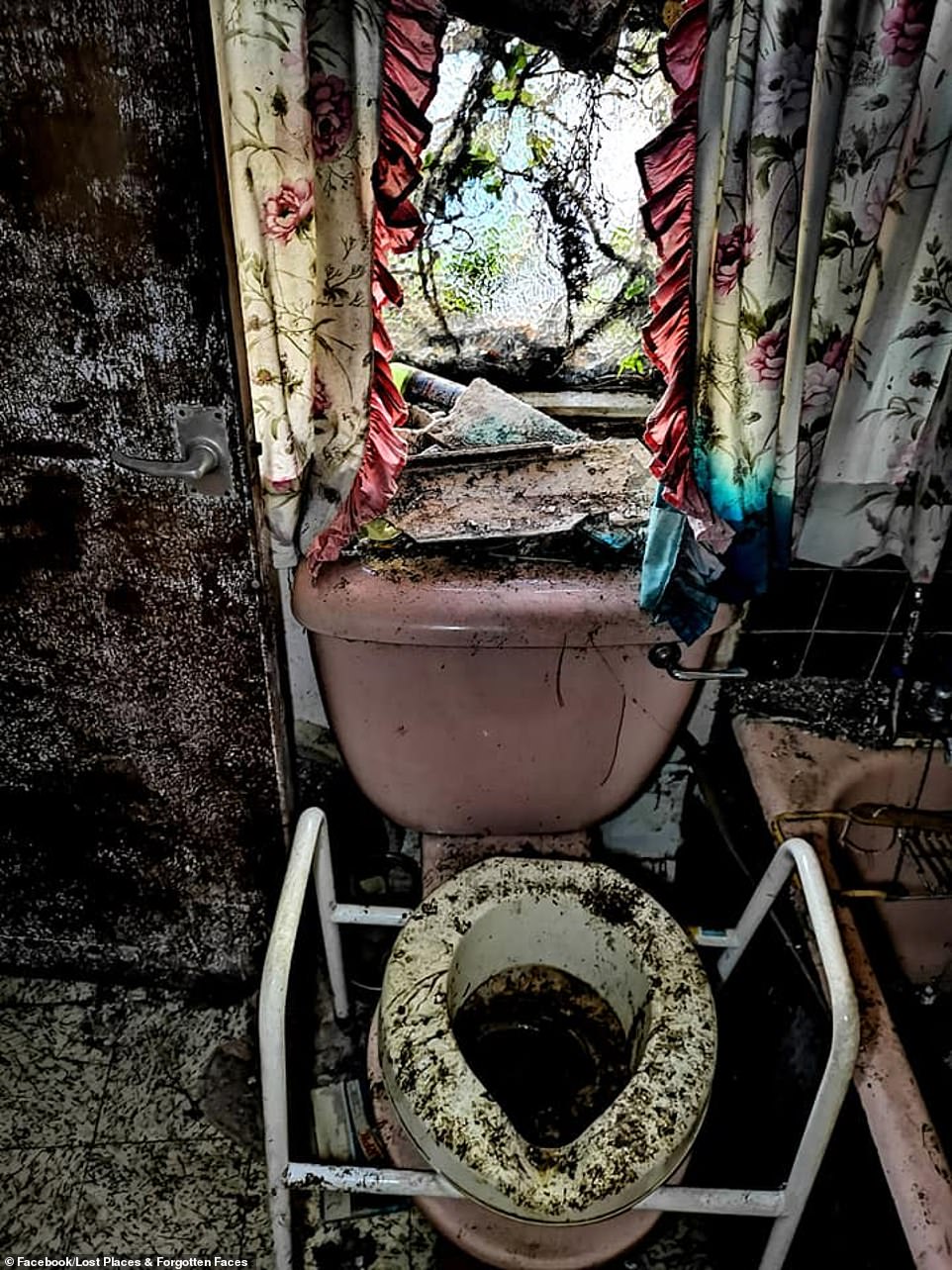 The toilet, with supplementary support hands, stands laden in filth as vegetation can be seen growing in from the window 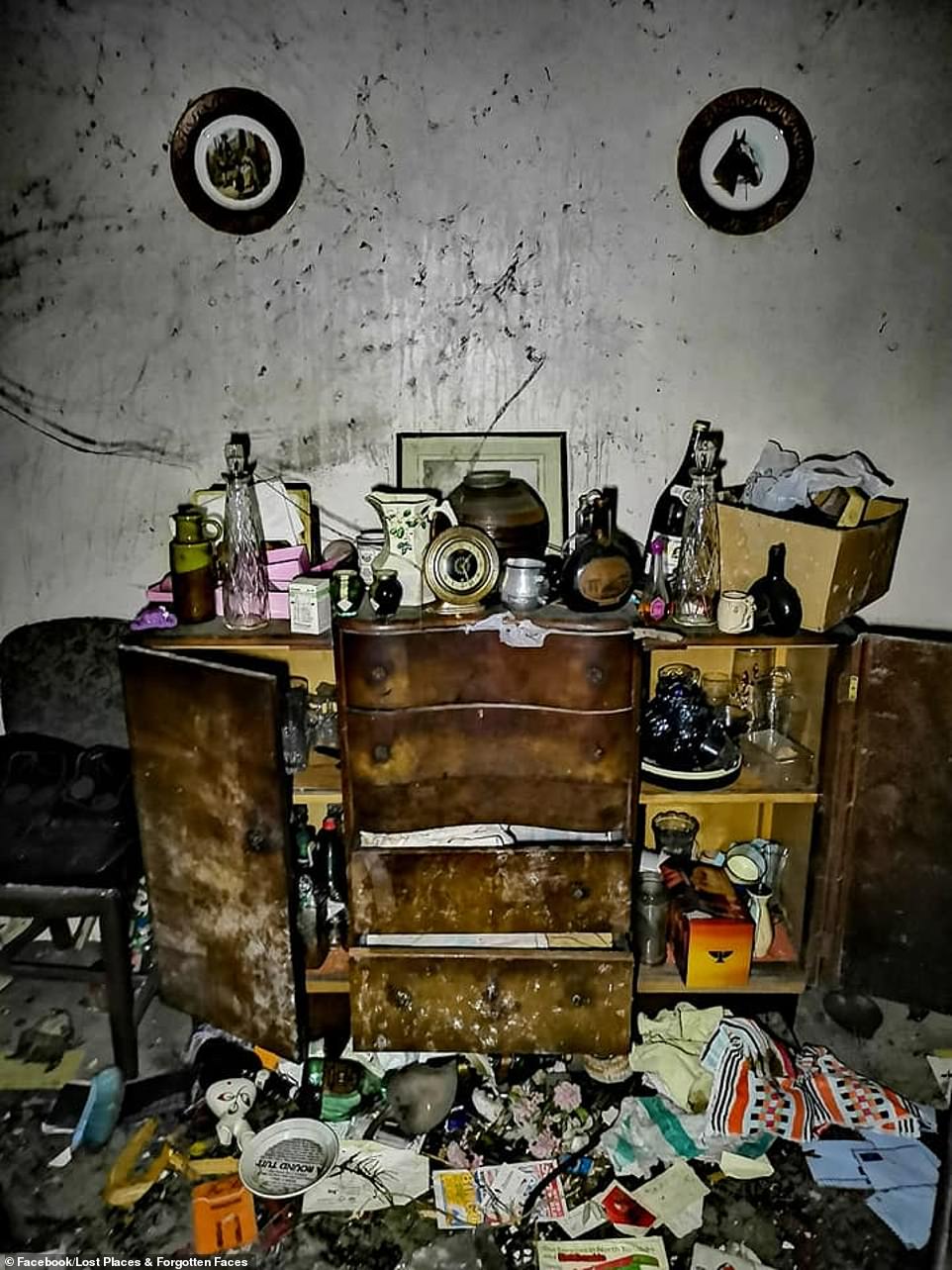 A family picture hangs on the wall (left side), while the wooden cabinet below houses trinkets and little keepsake items 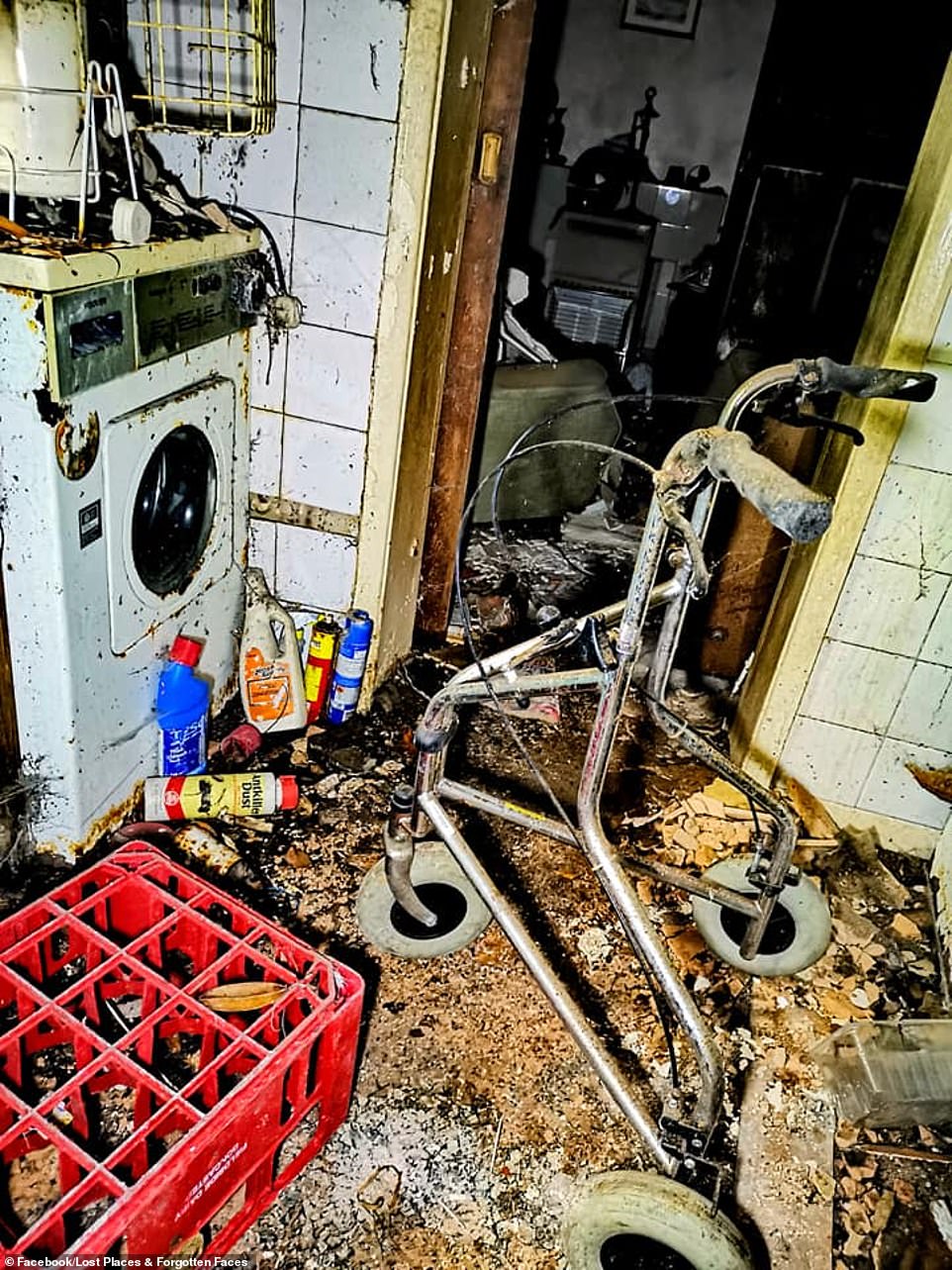 The dated interior of the property shows how it has been untouched by modern left, after being used for the final time only shortly after the turn of the century

‘She evidently ended her life by living only downstairs as a bed had been assembled to the rear of the dining room. She died in bed alone next to her walker.’

Taking stock of the surroundings and realising they were the only remaining remnants of a former life soon had a profound impact on the explorer.

They added: ‘Seeing everything left behind, a lifetime of possessions now rendered meaningless, made me feel so sad. Apparently, her only son lives abroad and after attending her funeral in 2003, he inherited the house but never bothered to clear out her belongings and they have since remained in a time warp.

‘The whole inside of the house has a very eerie feeling, and a strange smell. It is caked in cobwebs, mould and decay. I feel so sorry for the lady who once occupied this home, and I hope she is in a much better place.’

CategoryWorld News
TagsE House Inside of Sadness the