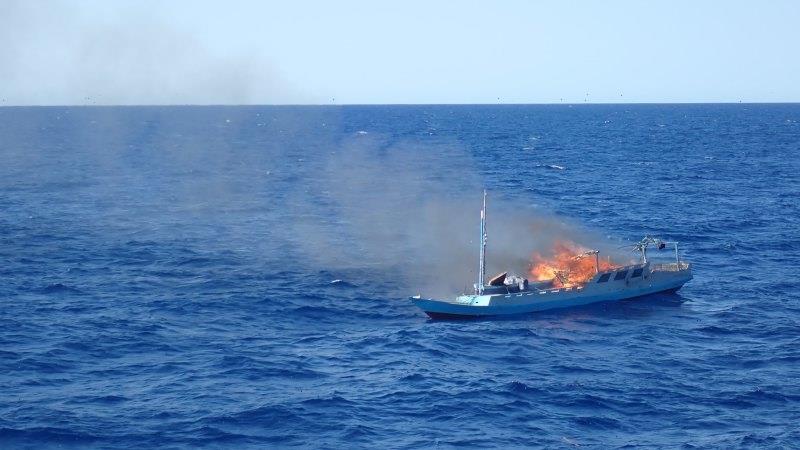 Singapore: Indonesia has suspended a joint maritime patrol with the Australian Border Force on the eve of a visit to Jakarta by Foreign Minister Marise Payne after the burning of three Indonesian fishing boats off the north-west coast of Australia.

Payne is due to fly into Jakarta on Wednesday for meetings aimed at settling Indonesian anxiety about Australia’s plans to acquire a nuclear-powered fleet of submarines as part of the new AUKUS agreement with the United States and United Kingdom. 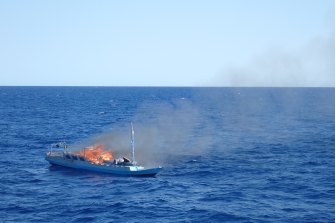 One of the fishing boats destroyed by Australian authorities off the coast of Western Australia.Credit:Australian Border Force

She will arrive days after the ABF released photographs of vessels that had been seized in an operation late last month near Rowley Shoals, about 260 kilometres west of Broome, as part of a crackdown against illegal fishing operations.

The ABF said 16 vessels that were fishing illegally in the area had been intercepted, with three destroyed and the others escorted out of Australian waters.

Indonesian authorities have reacted to the incident, however, by putting on hold a joint maritime patrol with Australia while they seek an explanation.

“This is a response to the developments that had happened. The Jawline-Arafura joint patrol is postponed,” said Rear Admiral Adin Nurawaluddin, the Director-General of Indonesia’s Marine and Fishery Resources Supervision in a statement.

Australian authorities seized fishing equipment and 630 kilograms of sea cucumber in the raids.

“We are committed to protecting Australia’s maritime environment and defending our borders, including against illegal attempts to fish in Australian waters,” said Rear Admiral Mark Hill, the head of Australia’s Maritime Border Command. 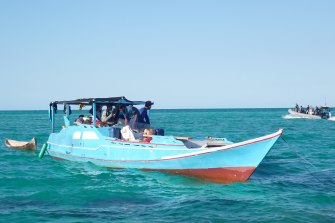 “The combined efforts of MBC and partner agencies enable surveillance, patrol and response capabilities, to combat illegal activity and threats to Australia’s border.“

Like Australia, Indonesia is also known to destroy fishing vessels it deems to be operating illegally in its waters after transferring crew to other boats.

But the latest episode could become a talking point as Payne arrives in Jakarta on the final leg of a south-east Asian tour that has taken in Malaysia, Cambodia and Vietnam in the past five days.

Payne’s regional blitz was organised after Indonesia and Malaysia voiced concerns about Australia’s submarine ambitions, fearing they may trigger a nuclear build-up in the Indo-Pacific.

She also flew out after Cambodia’s Hun Sen voiced frustration that a donation of more than 2 million doses of the Pfizer vaccine promised by Australia had not turned up.

After a meeting between the long-time Cambodian leader and Payne on Monday, Hun Sen said Australia had now pledged to provide 3.25 million vaccine doses to the south-east Asian nation, with 1 million to arrive by the end of the year.

While Philippine Foreign Minister Teddy Locsin Jnr has strongly supported the AUKUS deal and Singapore has expressed comfort with it, Indonesia and Malaysia have expressed serious misgivings about Australia’s submarine ambitions.

After a meeting between Indonesia Foreign Minister Retno Marsudi and her Malaysian counterpart Saifuddin Abdullah last month, Saifuddin said the countries were worried at the development even though Australia “doesn’t have the capacity for nuclear weapons”.

The issue did not, however, overshadow Payne’s stop in Kuala Lumpur over the weekend, with Saifuddin not reiterating Malaysia’s misgivings during a joint press conference with her on Saturday.

Brits losing £1,200 a YEAR by not claiming refunds they're entitled to