Home » In Moscow, big brother is watching and recognising protesters 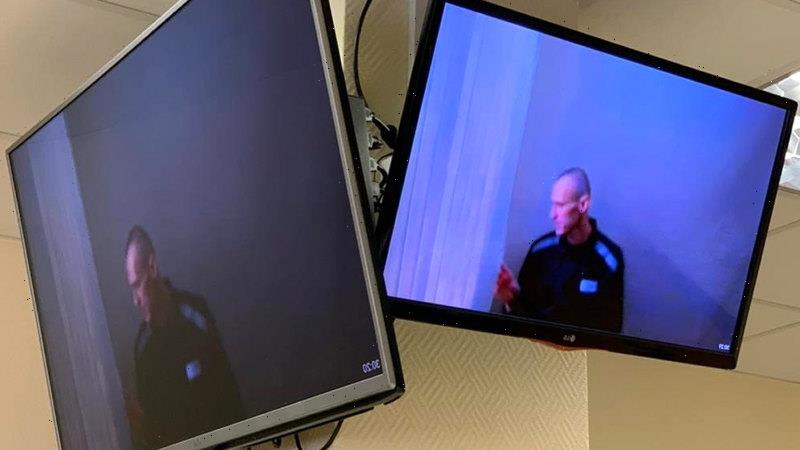 In Moscow, big brother is watching and recognising protesters

Police tapped the surveillance system to identify and detain dozens of people who attended last week’s protests in the Russian capital in support of jailed Kremlin foe Alexey Navalny. More than 50 were picked up over the following days, including several journalists, according to OVD-Info, an independent human-rights monitoring group that gathers information on detentions. 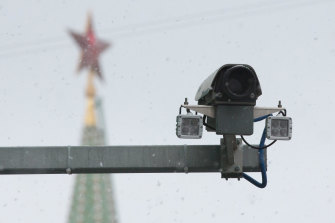 A surveillance camera operates as the Spasskaya tower of the Kremlin stands beyond in Moscow, Russia.Credit:Bloomberg

Anna Borzenko, 65, was held overnight in a cell after going to police when she learned officers had been to her apartment seeking to question her. “I was an experiment in the development of a total surveillance system,” she said. “This system will be more terrifying when it is established.”

Use of the technology adds to risks facing Russians who voice opposition to Putin as the Kremlin embarks on the most far-reaching crackdown in years. With Navalny isolated in a prison outside Moscow, and physically weakened after a 24-day hunger strike, his supporters are facing relentless legal actions to prevent them from organising against the authorities.

Investigations are even extending to lawyers and doctors providing professional assistance to opposition activists, a new development that’s further chilling dissent ahead of key parliamentary elections in September. 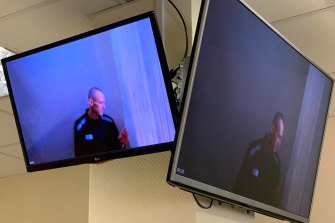 Russian opposition leader Alexei Navalny during a hearing over charges for defamation in the Babuskinsky District Court in Moscow, Russia last week.Credit:AP

Kremlin spokesman Dmitry Peskov denied there was a broad crackdown, saying that moves against activists were isolated incidents.

While the use of facial recognition technology is more widespread in China, which has created a vast surveillance system to monitor the Uyghur population in its Xinjiang region, the Kremlin has stepped up efforts to stamp out opposition since Putin pushed through constitutional changes last year that allow him to remain in power potentially to 2036.

The campaign is taking place as the President’s popularity with Russians is sputtering after a decade of stagnating incomes.

Others summoned for questioning after being identified with the aid of Moscow’s more than 100,000 cameras include photographer Alexander Grebeshkov, 65-year-old university professor Alexander Agadzhanyan, and reporters from TV Rain, Komsomolskaya Pravda newspaper, Echo of Moscow radio station, RTVi and the Meduza website, according to OVD-Info. 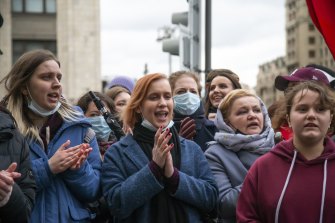 Police across Russia have detained large numbers of people in connection with demonstrations in support of jailed opposition leader Alexei Navalny in Moscow, Russia.Credit:AP

The moves against protesters come amid heightened tensions with the US and Europe over Ukraine and last year’s near-fatal chemical poisoning of Navalny in Siberia that he and Western governments blamed on Russia. The Kremlin denies responsibility and has accused Navalny of working on behalf of the US.

“The monopoly on fighting the opposition has moved from the Kremlin’s political bloc to the security services,” former Kremlin official Alexey Chadayev said. 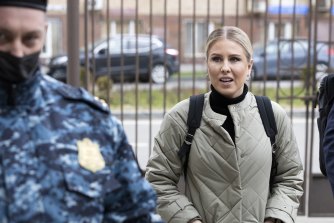 Law enforcement around the country has also targeted rank-and-file protesters, detaining about 1800 people at last week’s protests in support of Navalny, which the authorities labelled illegal.

Moscow police had seemed initially to use a soft touch, arresting only 48 people on the night, a fraction of the number they detained at previous protests this year and fewer than those held in smaller regional cities like Sochi and Barnaul.

However, the city’s camera network equipped with facial-recognition software meant police could track protesters back to their homes, where OVD-Info said most detentions took place.

“They use various techniques but they have one goal: intimidation,” said Mikhail Biryukov, a lawyer who represents several of the detained, including Borzenko. “Creating uncertainty over when they might come for you can be a better deterrent than using violence.”