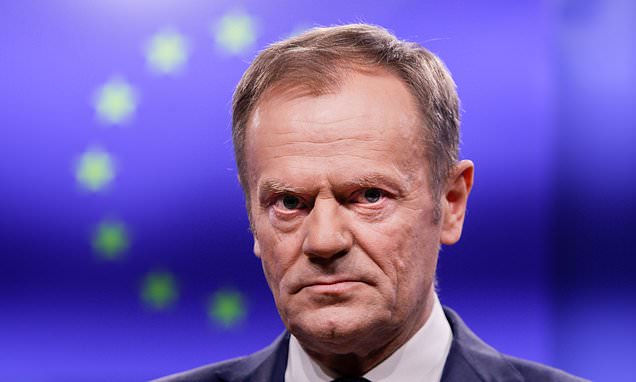 STEPHEN GLOVER: Ignore the EU’s insults – we’re on the verge of a deal if the Brexit ultras don’t sabotage it

The past few days have made one thing abundantly clear. There are two European Unions. One wants Britain to have an acceptable deal. The other does not. One is terrified of No Deal. The second is ready to take the risk.

In the first, reasonable, camp are Germany and its Chancellor, Angela Merkel; Poland and several other former Soviet satellites; Sweden, Denmark, Holland, Finland and Italy (when its rulers forget their own domestic problems).

In the second, intransigent camp are the Brussels bureaucracy including Jean-Claude Juncker and the odious Donald Tusk, who yesterday spoke of a ‘special place in Hell’ reserved for Brexiteers; European parliament Brexit co-ordinator Guy Verhofstadt, who echoed him by saying he doubted that Lucifer would welcome them; President Emmanuel Macron of France; and Ireland’s prime minister, Leo Varadkar.

Then, in the middle, there are countries which don’t trade much with Britain, or think about us a great deal, and are content to fall in with whatever settlement is finally reached.

If the reasonable lot get their way, there will be a compromise on the ‘backstop’. No Deal will be avoided, and there will be no economic shock for Britain or Europe.

But if the hardliners in Brussels prevail, we may leave (I won’t use the melodramatic words ‘crash out’) without a deal, and there will be unknowable, though probably severe, economic consequences for Britain and some European countries. 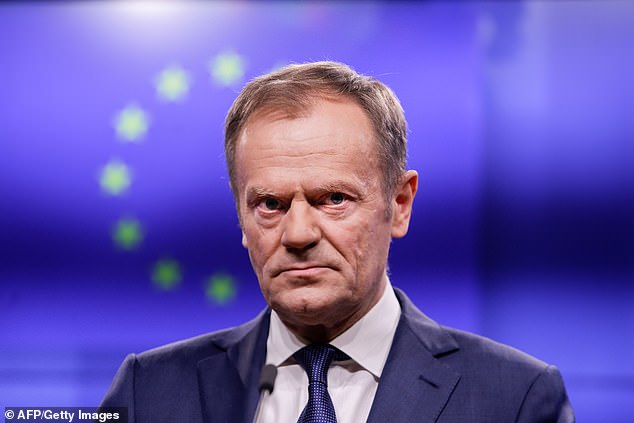 And also — this is not much mentioned, though it is very serious — there will be a legacy of bitterness between the United Kingdom and Europe that will blight our continent and weaken an already troubled West.

So which it is to be? The stakes could hardly be higher. An amicable divorce that is not destructive, or a messy break-up which would leave a lot of wreckage behind. There are only 50 days left . . .

Which brings me to Martin Selmayr and his zip.

Though not much known in this country or even in his native Germany, Selmayr is a big cheese in Brussels, where he serves as Juncker’s deputy. He has a fearsome reputation.

Juncker has affectionately called him the ‘monster’, while less indulgent souls at the European Commission have nicknamed him ‘Rasputin’ or ‘Darth Vader’. Visiting British officials have simply called him a ‘psychopath’.

As you’d expect, Selmayr is normally in the second group I’ve mentioned — sticklers who rigidly uphold every jot and tittle of EU rules and regulations, and won’t contemplate any sort of pragmatic compromise with Britain over the backstop.

Perhaps he’s still in this camp, along with that inveterate critic of Brexit, Donald Tusk. Yet in a meeting with British MPs in Brussels on Monday, he showed a surprising degree of flexibility. 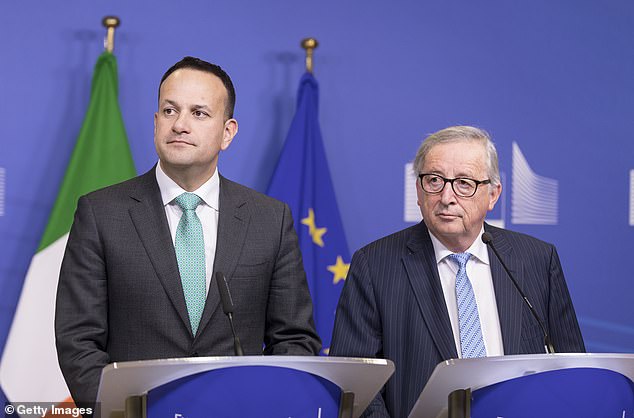 According to Labour MP Stephen Kinnock, Selmayr spoke of inserting some sort of legal protocol into the Withdrawal Agreement to the effect that the backstop is only temporary — something EU officials had previously insisted they would not do.

Kinnock said: ‘It is definitely [a case of ] reopening to quickly slip something in and close it very quickly. I would term it unzipping.’

The mind boggles. Inserting things in zips can be a dangerous business. Nor do I know how dextrous Martin Selmayr’s fingers are. Perhaps he envisages the 585-page Withdrawal Agreement as a kind of body-bag.

But actually the image of unzipping is an apt one. If a legal protocol could be swiftly inserted into the body of the Withdrawal Agreement ruling out a permanent backstop — well, that should satisfy all but the most bone-headed of ultra Brexiteers.

The beauty of opening, and then quickly closing, the zip is that it prevents all kinds of other already chewed-over controversies flying out of the Withdrawal Agreement for re-consideration by other countries.

For example, President Macron (whose beating of an anti-British drum to boost his flagging fortunes is a desperate ploy) retains an avaricious eye on our fishing grounds. The Spanish have unresolved grumbles about Gibraltar, while the Greeks are seething over the Elgin Marbles.

With only 50 days to go, this is no time for a free-for-all. Selmayr, as reported by Stephen Kinnock, is right. The questions are: will the offer, or something like it, be made? And, if it is, will it be accepted by hard-line Brexiteers? 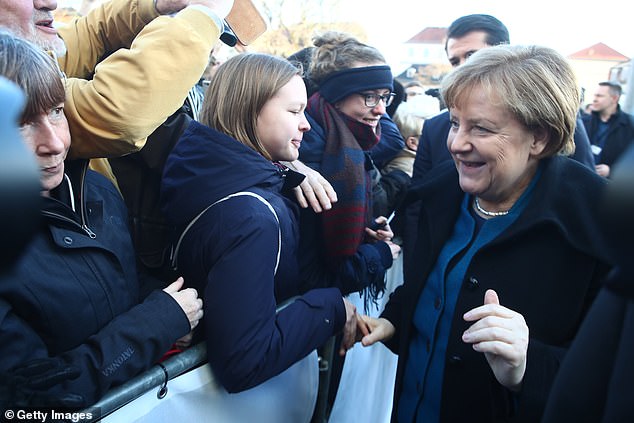 German Chancellor, Angela Merkel, is in the ‘reasonable camp’ that wants Britain to have an acceptable Brexit deal

I’m going to stick out my neck. I predict Brussels will propose some sort of legal guarantee that Britain can’t be made to stay in the Customs Union against its will if no solution to the backstop is forthcoming.

The reason I believe this is that the self-interest of democratically elected governments — many of which are appalled by the prospect of No Deal — is likely to triumph over the ideologues at the European Commission.

Admittedly, these purists — Juncker, Tusk and Michel Barnier — have made the running during the negotiations as they did their utmost to deliver a punishment beating to Britain that would deter any other country from leaving their fledgling superstate.

But things have changed. In particular, economic conditions in Europe have deteriorated to an extent that wasn’t foreseeable even three months ago. Italy is in recession, while France and Germany are teetering on the edge of one.

One could say that Britain is fortunate to be negotiating with Brussels when the EU is suddenly and unexpectedly weak. Theresa May, despite her recent tribulations, may be divinely blessed.

Although no one can be sure what the effect of No Deal would be, there have been many studies suggesting it could precipitate already floundering economies, including Germany’s, into a severe recession.

Who would want that? Not elected leaders, obviously. Not Angela Merkel, who has been listening to petrified German car-makers — already weakened by the collapse in diesel car sales, and the looming threat of stiff U.S. tariffs.

Britain is their biggest single market. About one in seven cars manufactured in Germany is sold in this country. The tariffs which would follow No Deal are the last thing they need. 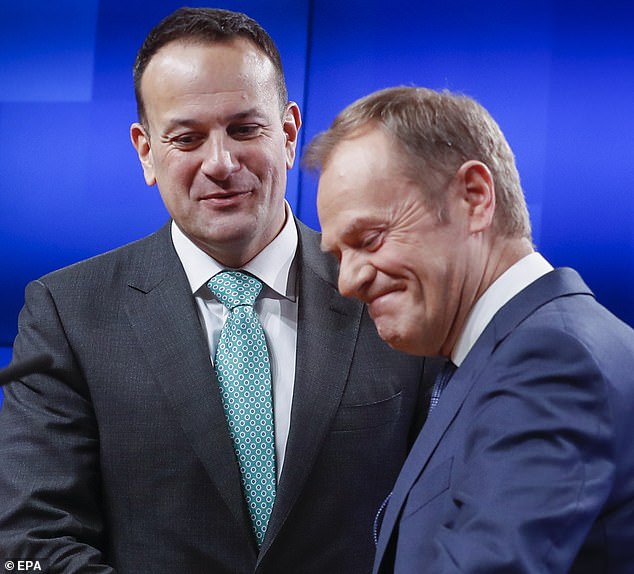 President of the European Council, Donald Tusk (right) and Prime Minister of Ireland Leo Varadkar during a press statement after a meeting on Brexit in Brussels yesterday

And France? Despite all the posturing of that preening narcissist Emmanuel Macron, I can’t believe he really wants irate French farmers marching down the Champs-Elysees complaining that British markets are closed to them.

Mrs Merkel’s attempts at conciliation over recent days suggest that at long last Europe’s politicians are publicly flexing their muscles, and are unlikely to allow Brussels dogmatic bureaucrats to call the tune.

Indeed, Martin Selmayr’s deftness with zips is probably evidence of this. He has close links with the ruling Christian Democrats in Berlin. Isn’t it likely that this normally obdurate EU functionary is being leaned on by the German government?

So I repeat my prediction that a significant concession on the backstop will be offered by the EU over the next few weeks. Ireland’s hysterical concerns over its border with Northern Ireland won’t be allowed to plunge Europe into recession.

But will such a final deal be accepted by the hard-line Brexiteers? And the Democratic Unionists? There, I am far less sure. We have our own hardcore of purists and ideologues who may be more doctrinaire than their counterparts in Brussels.

Martin Selmayr is unzipping. Even the sepulchral Donald Tusk, with his repeated abominations of Brexit, will probably be side-lined by real-life politicians.

But our own ultras? How bitterly ironic it will be if, in the home of moderation and good sense, compromise and pragmatism do not prevail.