Home » World News » If we fail to prosecute war crimes, the law is a ‘dead letter,’ says inquiry judge

If we fail to prosecute war crimes, the law is a ‘dead letter,’ says inquiry judge

The senior judge who led the biggest and most damning war crimes inquiry in Australian history has said that investigating and prosecuting war crimes is vital to preserve the nation’s “reputation and standing”.

In a rare public foray, NSW Court of Appeal Justice Paul Brereton warned in a speech earlier this month that Australian laws prohibiting war crimes “are pointless if they are not enforced, and a law which is not enforced soon becomes a dead letter”. He also flagged “the risk that national chauvinism might trump justice according to the international law of armed conflict”. 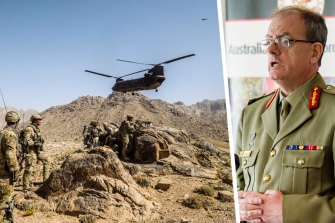 Brereton conducted the long-running military inspector-general’s inquiry into war crimes in Afghanistan, which issued its explosive public report in November 2020.

His comments come as the Australian Federal Police’s (AFP) parallel war crimes inquiry passed its four-year anniversary this month, having not laid a single charge or absolved any suspect since beginning in June 2018. Since May 2020, the Commonwealth Director of Public Prosecutions, Sarah McNaughton, SC, has been analysing interim briefs of evidence compiled by the police inquiry.

Complicated investigations can take years for police and prosecutors to resolve, either by reaching a decision to prosecute or by concluding there is insufficient evidence to charge. But the four years and counting timeline of the AFP’s Afghan war crimes investigation is causing concern among lawyers and supporters of witnesses.

According to sources dealing with police witnesses, some have not heard from the AFP in many months and they are concerned that, as more time passes, memories will fade. 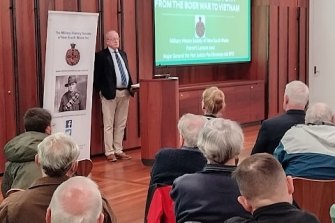 Concern about the AFP’s ability to handle the multiple war crimes allegations arising out of the Brereton inquiry led to the creation of a dedicated war crimes agency, the Office of the Special Investigator, in early 2021. While the OSI has launched its own inquiries, the AFP has retained carriage of the probes it began in 2018.

In a lecture at the Military History Society on June 4, Brereton did not mention Afghanistan and spoke only of war crimes case studies dating back decades. But his public comments are significant because his investigation was the catalyst for the police inquiries into multiple Australian soldiers over allegations they executed prisoners in Afghanistan.

The judge’s speech was made all the more remarkable by the attendance of another judicial heavyweight, Len Roberts-Smith, a former West Australian Supreme Court judge and the father of Victoria Cross recipient Ben Roberts-Smith. In his role as military inspector-general probing alleged war crimes, Brereton referred Roberts-Smith and two other former soldiers to the Chief of the Defence Force in May 2018, triggering the AFP’s ongoing inquiry.

Roberts-Smith jnr has previously publicly attacked the work of the Brereton Inquiry, claiming it was based on rumours rather than evidence. 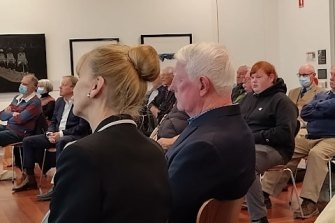 Len Roberts-Smith at the lecture.

Len Roberts-Smith, also a former judge advocate general for the Australian Defence Force, sat in the front row of the small auditorium, a few feet from Brereton, during the speech. Earlier this year, Roberts-Smith snr regularly attended the defamation trial launched by his son against The Age, The Sydney Morning Herald and The Canberra Times for implicating him in war crimes allegations.

In June last year, Roberts-Smith snr issued a statement attacking the allegations. “We never expected that our son would be unfairly attacked in this manner after he served his country in Afghanistan with distinction and risked his life,” it said.

In Brereton’s speech, titled “War Crimes in Australian History: from the Boer War to Vietnam”, he detailed key themes and issues that have clear parallels with those that form part of his 2020 Afghanistan war crimes report. The judge, who is also a major-general, spoke of the critical role of soldiers who, in the face of immense pressure, break ranks to expose war crimes in a bid to “seek atonement”.

He said “significant themes” that fuelled the atrocities committed by infamous Australian soldier Breaker Morant in the Boer War had reappeared in modern war crimes cases, including that of American special forces soldier Eddie Gallagher. Gallagher was unsuccessfully prosecuted in 2019 for executing an Islamic militant taken prisoner in a high-profile US case in which Gallagher won backing from then US president Donald Trump.

The historical war crimes themes that Brereton listed in his speech, and that mirror those in his 2020 report, also include: the alleged “use of subordinates” to execute prisoners; the use of “cover stories” to conceal crimes; and the “deterrence of reporting by threats and fear”.

In his final Afghanistan war crimes report, Brereton detailed multiple accounts of subordinates allegedly killing Afghan prisoners and how the “fear … of reporting misconduct to the chain of command has deterred some from doing so”.

Brereton argued in his speech that it was both vital and in the national interest to ensure war crimes are both investigated and prosecuted, despite the difficulty in doing so.

“It is not only because there is an international law obligation to do so. Fundamentally, laws are pointless if they are not enforced, and a law which is not enforced soon becomes a dead letter,” he said. “War crimes differ from other crimes, in that they affect not only the individuals concerned, but also the nation’s reputation and standing.

A nation’s preparedness to investigate war crimes by its own is a mark of a mature civilisation and one way in which it can remedy the stain on its reputation occasioned by the commission of crimes in its name by its service personnel.”

Brereton, who has interviewed hundreds of soldiers as part of his recent inquiry, also reflected broadly on the experience of veterans who encounter alleged war crimes.

“Those who have been compelled to participate in, or have failed to prevent, serious transgressions of what they believe to be right, are amongst the most seriously traumatised,” he said.

“Moral injury is about serious internal conflict, associated with guilt and shame, caused by perpetrating, failing to prevent, bearing witness to, or learning about acts that transgress deeply held moral beliefs and expectations. The injunctions of the laws of armed conflict seem to coincide with deep-seated human morality.”

6.10 Royal Ascot result – day 4: Who won the Palace of Holyroodhouse Handicap 2022? How every horse finished | The Sun