Home » World News » ‘I realised you need to be inside the tent’: diverse candidates stand for councils

‘I realised you need to be inside the tent’: diverse candidates stand for councils

The minister published a list of his concerns about African migrants, including race-based gangs, alcohol abuse, fights at nightclubs and family infighting.

“Ever since then, there has been a targeted racial profiling campaign,” says Ms Yengi, the former CEO of The Social Studio, a social enterprise and fashion school for refugees. 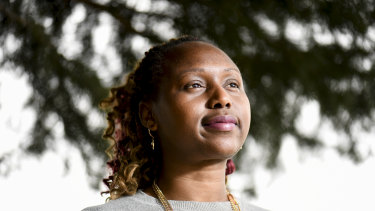 She says racism experienced by African Australians has exploded in recent years, fanned by politicians and media coverage of the so-called “African gang problem”.

This year, Ms Yengi is one of a number of African-Australian candidates standing in local government elections on October 24.

The impact of the racialised African gang coverage and the lockdown of the public housing towers has in part led to a new generation of leaders who hope to give a voice to under-represented communities.

Ms Yengi says Maribyrnong — where she is standing as a Labor candidate — has the second most ethnically diverse population in Victoria, with 40 per cent of residents born outside Australia. “Our council is definitely not reflective of this,” she says.

The African-Australian candidates come from a range of backgrounds and are standing as ALP, Greens or independents for councils including Wyndham, Maribyrnong, Yarra, Melbourne and Warrnambool.

Earlier this month, they held a Zoom community forum: Meet your African Candidates. “This is the first time we’ve had this many community members put their hands up for election, which is very exciting,” Ms Yengi said on Facebook.

The forum was told that residents had complained to a council about a large group of African Australians playing basketball in a park.

“Because we all stand out, perhaps people feel intimidated by us,” Ms Yengi says. “Rather than the council trying to speak to the community, they just shut the playground.”

She says the African-Australian candidates are all passionate about advocating for greater representation for marginalised and underrepresented community groups.

“I think that other than having different perspectives and experiences, our advantage is the connection we have to the grass roots and being able to relate to other CALD (culturally and linguistically diverse) communities,” Ms Yengi says.

This year will be the first time all councillors in Victoria will be elected via postal ballots to address the risk of conducting elections in the middle of a pandemic.

But the fact the elections will proceed at all is controversial amid concerns they will heavily favour incumbents who already have a profile.

A frustrated Municipal Association of Victoria president, Cr Coral Ross, said the decision meant the elections would not have the quality and diversity of candidates that Victoria deserved. 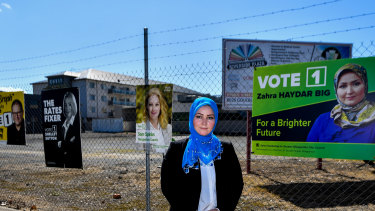 The Victorian government — which has committed to achieve 50 per cent female councillors and mayors by 2025 — has funded the It’s our Time campaign to encourage more women to stand.

Currently, the representation of women sits at 38 per cent, with 13 of Victoria’s 79 councils having only one female councillor.

Zahra Haydar Big, who came to Australia in 2008 as a refugee from Afghanistan, is standing as an independent for Greater Shepparton Council. She says so far she is the only female Hazara Australian to stand in Victoria in 2020.

“One of the reasons I am standing is gender equity,” says Ms Haydar Big, who has worked in a range of community service roles including as a case worker for the Australian Red Cross and a community hub leader at a local primary school.

“I want women to fulfil their dreams. Nothing here in Australia can stop our dreams.”

Ms Haydar Big hopes her election tilt shows the wider community that refugees are hard-working and want to contribute to Australia.

“Shepparton is our home. I want to be a voice to improve the local area.”

Hamdi Ali, who was forced to flee refugee camps in Somalia because of war, came to Australia in 1992 on a humanitarian visa.

“To be honest, I’ve never thought of myself as a politician,” says Mr Ali, who lives in a public housing estate in Carlton.

But over time, Mr Ali, who volunteers for the Carlton Legal Service and Carlton Housing Estates Residents Services, came to realise how disconnected the east African community was from the political system.

“For a lot of people, the first time they learn about council is when they get a fine for not voting in the elections,” he says. “They think the ballot is junk mail.”

Mr Ali says Melbourne City Council is especially unrepresentative, in part because it is the only council in Victoria where businesses are given two votes.

His decision to stand for the council was confirmed by the July lockdown of public housing estate towers in Flemington and North Melbourne.

Mr Ali does not oppose the decision but says it was not explained to the east African community, which exacerbated their sense of being outsiders. Initially, community leaders were prevented from providing food to residents and Muslims raised concerns about it not being halal.

“It just confirmed the disconnection between the community and services being provided — they were not made to be a part of it,” Mr Ali says.

After careful consideration, Mr Ali joined the ALP, which has endorsed him as a candidate. “I realised you need to be inside the tent.”

Candidate nominations for the council elections close at noon on September 22.

CategoryWorld News
Tags'Be I Ins Need realised to You