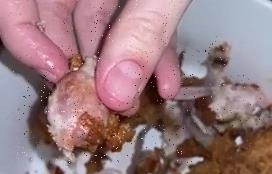 A HORRIFIED couple claim they found a fried chicken "testicle" in their KFC – vowing to never eat from the fast food joint again.

Scott Lovece, 31, picked up a Mighty Bucket for One from the Braintree KFC when his partner Jade, 27, spotted a 'hard, ball-like’ piece in her breaded box that oozed a funky-smelling liquid. 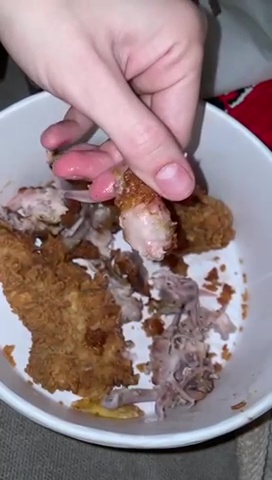 Scott, who was working as a courier when he picked up the order from the Essex branch, said Jade called him horrified when she discovered the "testicle".

Jade said: "I reacted like I do when I see all testicles – gagged immediately."

Scott rushed straight home to see if the grim discovery was as bad as it sounded.

Scott said: "I ordered [the meal] for my partner only to get a call saying she found this ‘testicle’ or ‘tumour’ in her food.

"I was straight on the phone to her, rushed home to see if it looked as bad as it did in the video, it was!

"It was hard and smelt pretty funky."

In the video, a round, clear sphere can be seen covered in a light dusting of breadcrumbs, as Jade pointed out that it looked like a chicken's testicle.

Scott added: "Well my partner said instantly she thought it was a testicle because of the shape and how sort of ‘ball like’ and hard it felt and then when she pressed it all the stuff come out of it.

"Upon research, we found out that chickens don't have testicles, cockerels do so then we thought it maybe a tumour or something like that.

"Jade stopped eating straight away and we were instantly put off."

Scott immediately went to complain to the branch where he picked up the chicken bucket earlier that day.

He said: "I showed one of the managers, they were shocked and said it looks disgusting.

"She apologised and said we need to see it so they can run it past their store manager.

"I went home, grabbed it in a bag and brought it back to the store. She gave me a refund on the meal and asked me to send her the video.

"When I brought it to the store, she took it out the back, put big blue gloves on and cut it open.

"I didn't see what come out of it but she said it wasn't pretty."

He added: "I thought them giving me a refund was the least they could do, it's pretty concerning though.

"How many other meals could that sort of thing be in? How would they track it back to find out how it happened? I have so many questions."

A KFC spokesperson said: “We know what this looks like but rest assured, it’s not a chicken testicle.

"It’s more than likely a giblet – which shouldn’t be there but can sometimes get left behind when preparing fresh chicken.

"We know this balls up probably put Scott off his meal so we’re reaching out to make things right.” 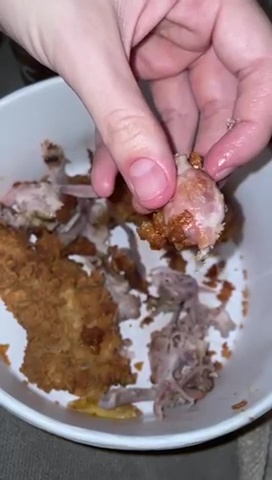