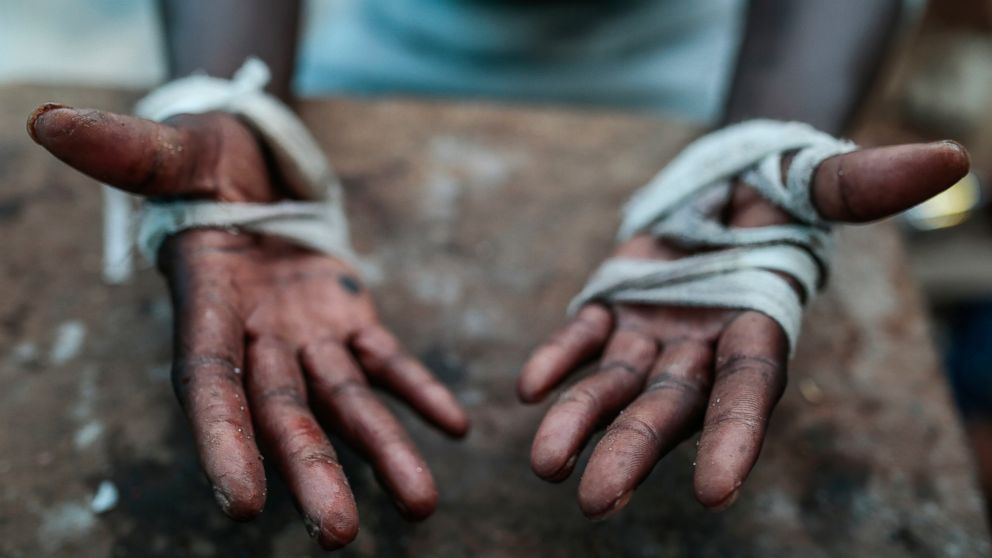 As Morocco prepares to host the signing of a landmark global migration agreement, hundreds of migrants are languishing in a Casablanca camp rife with hunger, misery, lice and filth.

These sub-Saharan Africans who dream of going to Europe are a symbol of the problems world dignitaries are trying to address with the U.N.’s first migration compact, being finalized at a conference in Marrakech on Monday and Tuesday.

Rising numbers of migrants live in the makeshift camp that sprung up on a soccer field near a busy Casablanca bus station, where they are bedded down under tents or shacks built from plastic and wood.

Scant food, a lack of heat and no sanitation are the main worries at the Oulad Ziane camp, as lice and respiratory infections are becoming endemic.

Morocco embodies multiple dilemmas facing the countries meeting in Marrakech: It’s a major source of Europe’s migrants but is also a transit country as well as a migrant host for other Africans fleeing poverty and persecution.

The 34-page U.N. Global Compact for Safe, Orderly and Regular Migration is to be formally approved in Marrakech, Morocco, on Dec. 10-11. But the United States and several European countries have said they won’t sign on.

The Oulad Ziane camp houses African migrants seeking to reach Europe via the western Mediterranean route to Spain after crackdowns by Italy and Malta have slowed smuggling traffic in the eastern Mediterranean. Many of the migrants have already tried the journey north to Morocco’s border with Spain, only to be pushed away by Moroccan police, sometimes violently.

In the meantime they look for work in Casablanca, hoping to earn enough to pay smugglers to try once again.

New arrivals at the Casablanca camp came after clashing violently with Moroccan border agents as they tried to scale the fence separating Morocco from Spain’s North African enclave of Ceuta.

“I am only here to recover. I come and go,” said 19-year-old Guinean Ibrahim Bah, who arrived days ago with open wounds on his wrists, arms and back.

“Moroccan forces caught us and beat us. They broke one of my friend’s arms, handcuffed us and crammed us on a bus. This time they dropped us in Casablanca but usually they take us far to the south,” he said.

Government officials didn’t respond to requests for comment on inhumane treatment of migrants or the Casablanca camp, but Morocco’s government describes the country’s migration policy as “exemplary.” That mostly refers to reforms launched in 2014, largely funded by the EU, to encourage migrants to stay in Morocco.

More than 23,096 migrants have been given Moroccan residency since 2014 and the authorities are currently processing about 25,000 other applications.

Still, more than 6,500 Sub-Saharan migrants and refugees were arrested and pushed back on buses to southern Morocco or toward Algeria between July and September 2018, according to an anti-racist group Gadem.

Other migrants in the Oulad Ziane camp had just walked over 100 hours from Tiznit, a town in Morocco’s far south where they had been deported to.

“The precarious journey is never over. It’s constant fear. You walk in the street, you get arrested. You go to the mosque, you are arrested. We feel like criminals,” said Jiane Jbrahima, a 22-year-old from Senegal.

Jbrahima lived for five years in Tangiers before undergoing, along with thousands of migrants, what Amnesty International describes as a “large-scale crackdown on thousands of sub-Saharan migrants, asylum-seekers and refugees” by Morocco.

Migrants arrested in the north are at times held for several days in two Tangiers police stations before buses bring them back to the south. These detentions are “wholly arbitrary and legally unsubstantiated,” as “no one was brought before a judge at any stage,” says Gadem.

A Spanish activist working in Morocco, Helena Maleno, says the EU-supported Moroccan regularization policy would work if it brought about real change in terms of providing migrants work and access to health care.

“The initiative is good on itself, but it does so little to change the hard reality of migrants, mostly because it’s not really targeted to provide assistance for them but rather to please the EU and keep migrants from reaching Europe,” she said.

Rising numbers of migrants taking the Morocco-Spain route to Europe have turned Morocco into the main entry point for sub-Saharan African migrants, putting border pressures on the North African kingdom.

The EU agreed this summer to give Morocco $275 million to halt flows of illegal migrants, “pushing the country to take a more violent approach in stopping migrants from reaching Europe,” says Maleno.

Concerned by rumors of an upcoming deportation campaign, migrants in Casablanca camp spend most of their time in their ragged tents, smoking cannabis and talking about the psychological scars from years of uncertainty.

“I listen to the radio and the news says that it’s good for us here. I wonder if they’re oblivious to what is going on or simply they think we’re idiots,” said Mohamed Rafiou Barry, 22, from Guinea. “Even if 40 years pass, I’ll never forget being taken from one bus to another, beaten, eating from garbage. You don’t forget those things.”