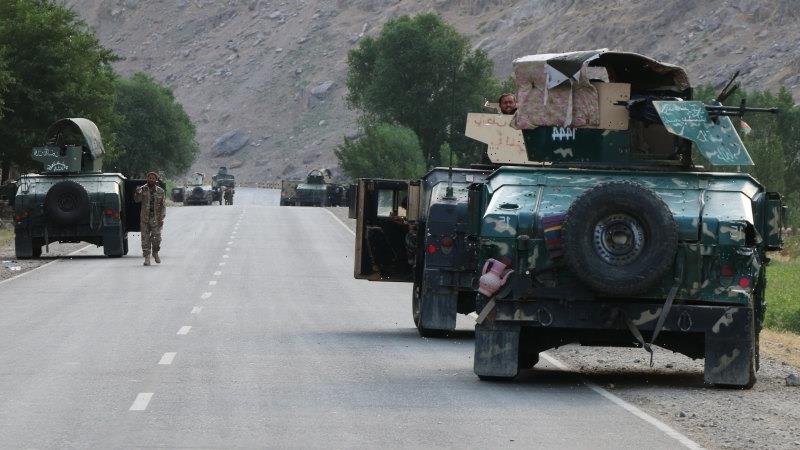 Kabul: The Taliban’s march through northern Afghanistan has gained momentum with the capture of several districts from fleeing Afghan forces, several hundred of whom fled across the border into Tajikistan, officials said.

More than 300 Afghan military personnel crossed from Afghanistan’s Badakhshan province as Taliban fighters advanced towards the border, Tajikistan’s State Committee for National Security said in a statement late on Sunday. The Afghan troops crossed over at about 6.30pm local time on Saturday.

Feeling Afghan soldiers pause on a road at the front line of fighting between Taliban and security forces, near the city of Badakhshan, northern Afghanistan on Sunday.Credit:AP

“Guided by the principles of humanism and good neighbourliness,” the Tajik authorities allowed the retreating Afghan National Defence and Security Forces to cross into Tajikistan, said the statement

Since mid-April, when US President Joe Biden announced the end to Afghanistan’s “forever war”, the Taliban have made strides throughout the country. But their most significant gains have been in the northern half, a traditional stronghold of the US-allied warlords who helped defeat them in 2001.

The Taliban now control roughly a third of all 421 districts and district centres in Afghanistan.

The gains in north-eastern Badakhshan province in recent days have mostly come to the insurgent movement without a fight, said Mohib-ul Rahman, a provincial council member. He blamed Taliban successes on the poor morale of troops who are mostly outnumbered and without resupplies. 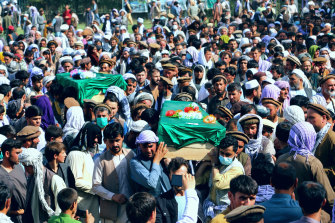 Afghans carry the body of civilians killed during fighting between the Taliban and security forces, during their funeral in Badakhshan province on Sunday.Credit:AP

“Unfortunately, the majority of the districts were left to Taliban without any fight,” said Rahman. In the last three days, 10 districts fell to Taliban, eight without a fight, he said.

Hundreds of Afghan army, police and intelligence troops surrendered their military outposts and fled to the Badakhshan provincial capital of Faizabad, said Rahman.

Even as a security meeting was being held early on Sunday to plot the strengthening of the perimeter around the capital, some senior provincial officials were leaving Faizabad for the capital Kabul, he said.

In late June the Afghan government resurrected militias with a reputation of brutal violence to support the beleaguered Afghan forces but Rahman said many of the militias in the Badakhshan districts put up only a half-hearted fight. 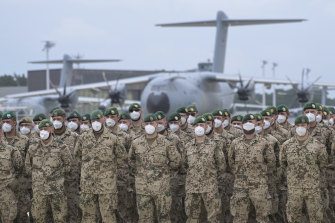 German soldiers lined up for their final roll call in Wunstorf, Germany, after returning from Afghanistan last week. Credit:AP

The areas under Taliban control in the north are increasingly strategic, running along Afghanistan’s border with central Asian states. Last month the religious movement took control of Imam Sahib, a town in Kunduz province opposite Uzbekistan and gained control of a key trade route.

The inroads in Badakhshan are particularly significant as it is the home province of former President Burhanuddin Rabbani, who was killed by a suicide bomber in 2011. His son, Salahuddin Rabbani, is part of the current High Council for National Reconciliation. The slain former president also led Afghanistan’s Jamiat-e-Islami, which was the party of famed anti-Taliban fighter Ahmad Shah Massoud, killed by a suicide bomber two days before the 9/11 attacks in America.

The Interior Ministry issued a statement saying the defeats were temporary although it was not clear how they would regain control.

Taliban spokesman Zabihullah Mujahid confirmed the fall of the districts and said most were without a fight. The Taliban in previous surrenders have shown video of Afghan soldiers taking transportation money and returning to their homes.

Last week, Germany, Italy and Australia withdrew the last of their personnel in the country.