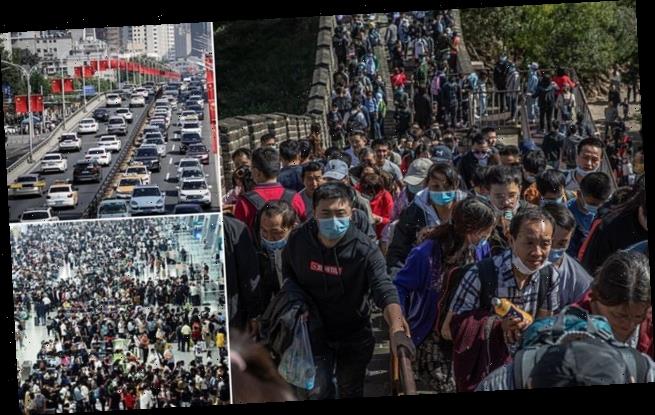 Hundreds of millions in China have hustled to enjoy their first major national holiday since the country claimed to have contained its COVID-19 outbreak.

The nation is also hoping to boost its coronavirus-ravaged economy by encouraging its citizens to take part in ‘revenge travel’.

Authorities estimate that around 550 million people will make trips within the country during the ‘Golden Week’ this year, an eight-day holiday celebrating China’s National Day and Mid-Autumn Festival.

Renowned tourist attractions, including the Great Wall and Shanghai Disneyland, were jam-packed with visitors on Thursday while passengers swamped train stations and airports. 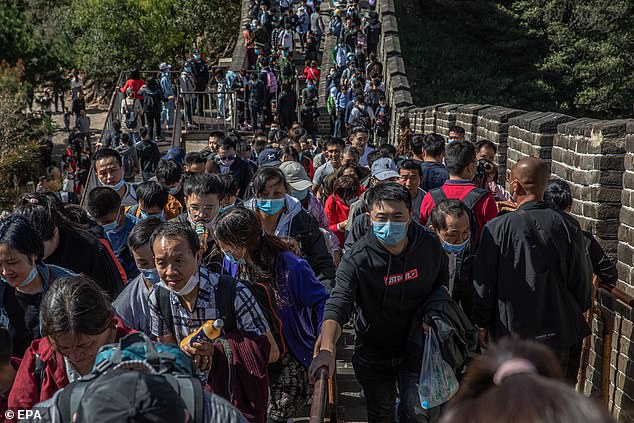 Hundreds of millions in China have hustled to enjoy their first major national holiday since the country beat its COVID-19 outbreak. Throngs of tourists are pictured visiting the Badaling Great Wall amid the coronavirus pandemic during National Day in Beijing on Thursday 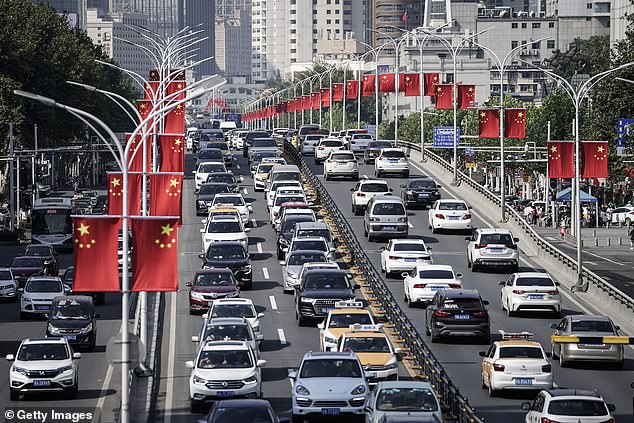 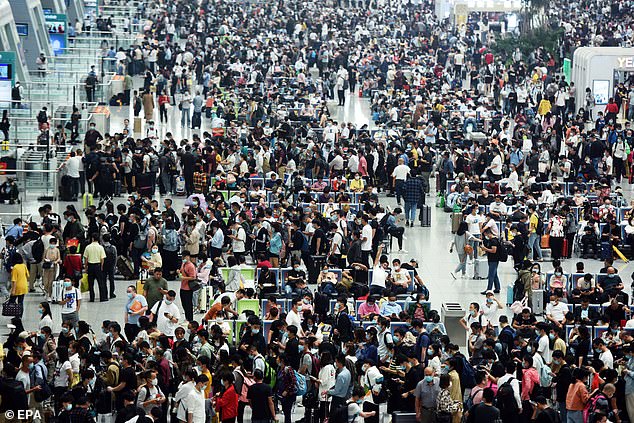 The Golden Week holiday marks the founding of the People’s Republic of China in 1949 and sees an astonishing annual movement of people trying to get home or take holidays.

But this year has added significance, with the crowds filling the concourses pointing to a country rebounding from the outbreak and parading the freedom to travel as a contrast to the rolling lockdowns hitting much of the world.

As China started slowly recovering from the outbreak, Chinese officials began promoting this pent-up demand, described by state media as ‘revenge tourism’ or ‘revenge travel’, in a bid to rejuvenate the economy.

Footage filmed by tourists today show hundreds of millions flocking to famous scenic spots all over China, including the Great Wall, Shanghai Disneyland and the West Lake in Hangzhou.

Another clip shows a group of police officers gathering as a human shield-wall to control the massive flow of visitors at The Bund in Shanghai, a famous waterfront overlooking the Huangpu River in the city. 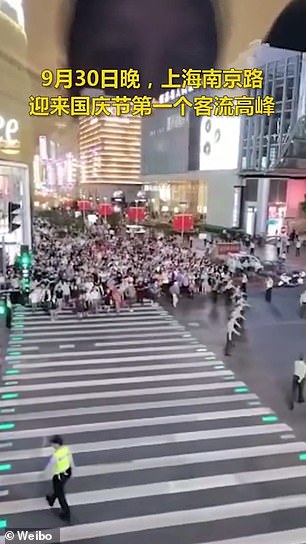 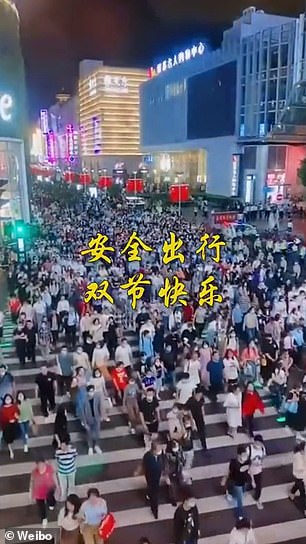 Police are seen gathering as a human shield-wall to control the massive flow of visitors at The Bund in Shanghai, a famous waterfront overlooking the Huangpu River in the city 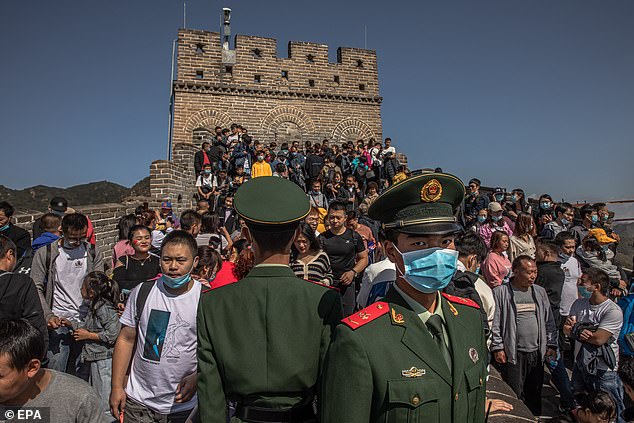 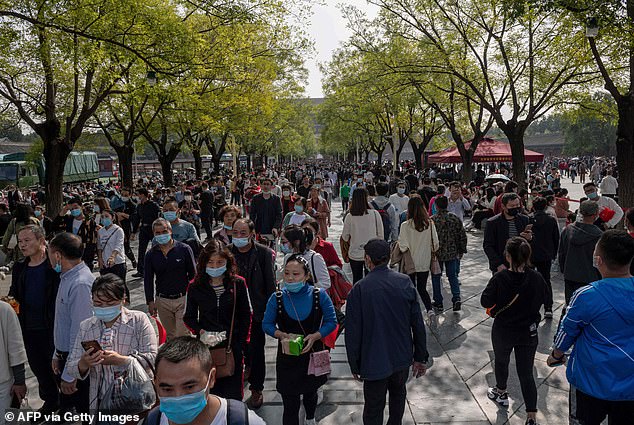 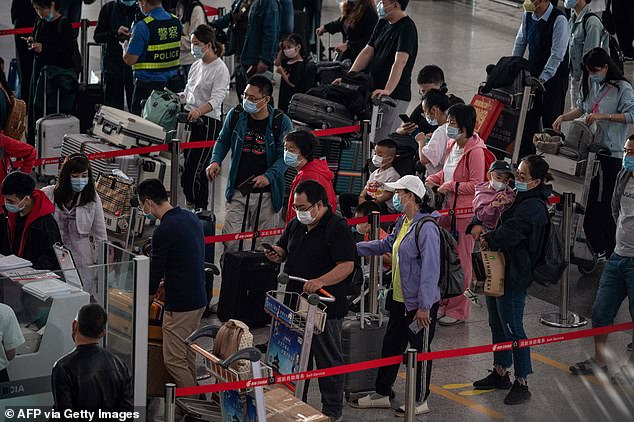 China appears to have largely contained the coronavirus outbreak while reporting mostly imported cases in recent weeks. People queue up to check in for domestic flights ahead of the country’s national holiday at Beijing’s Capital International Airport on September 30

‘Normally, we would take a family holiday abroad… but this year we opted for a staycation instead,’ Niu Honglin from Shanghai told AFP.

Niu booked rooms in a boutique hotel near Shanghai Disneyland but quickly encountered the problem of millions of extra tourists hunting fun at home.

‘My daughter had to wait in line for nearly three hours to get on a ride,’ she said.

Domestic travel has sprung back to life and given the economy a boost after the virus shuttered businesses and scared away tourists following its emergence in Wuhan late last year.

‘People are travelling with a vengeance!’ said Huo Binxing, a banker from Beijing who is heading to Lhasa in Tibet.

‘It’s our first chance to unwind after such a stressful period.’ 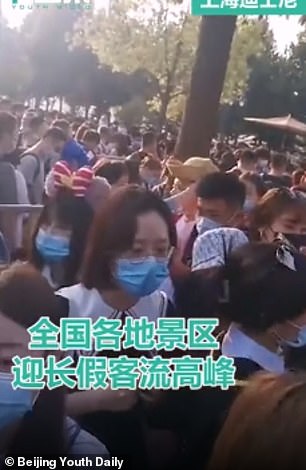 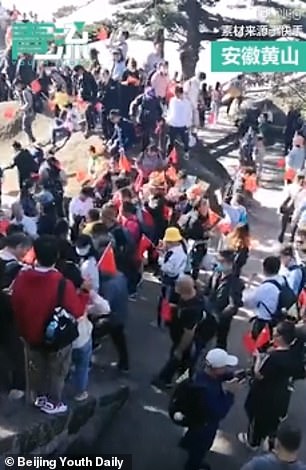 Authorities estimated that around 550 million people will make trips within the country during the Golden Week this year, an eight-day holiday celebrating China’s National Day

Wuhan in central China is back in business too, with visitors thronging to the Yellow Crane Tower — a Taoist shrine — according to the country’s biggest travel agency Ctrip.

But some have scrapped plans as the virus continues to seed anxiety.

Ming Rui, a fashion designer in Beijing, said she cancelled a visit to the coastal city Qingdao after two coronavirus cases were reported there last week.

‘It was our first family trip this year, but we cancelled because I got very nervous,’ Ming said, adding her parents are in their seventies.

More than 600 million trips will be taken during the holiday, down 20 percent from a year ago, Ctrip estimated, but they will still force the state railway to lay on 1,000 extra trains a day.

Around 108million passengers will take trains during the eight-day holidays — around 13.5million a day.

They are likely to bring much-needed spending to far-flung parts of China — last year, travellers spent $9.5billion (£7.4billion) during the Golden Week. 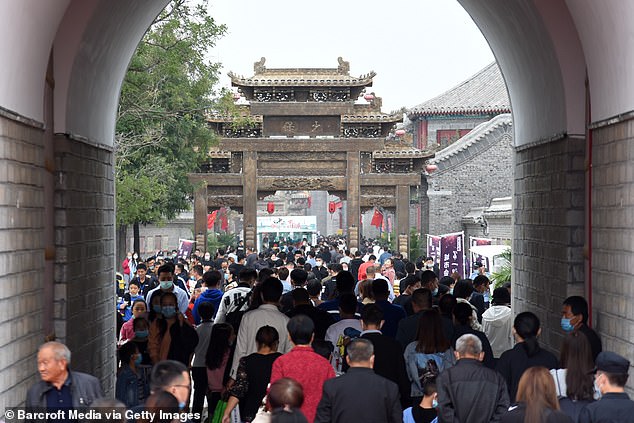 A scenic spot in Binzhou city, Shandong province is seen filled with tourists on Thursday 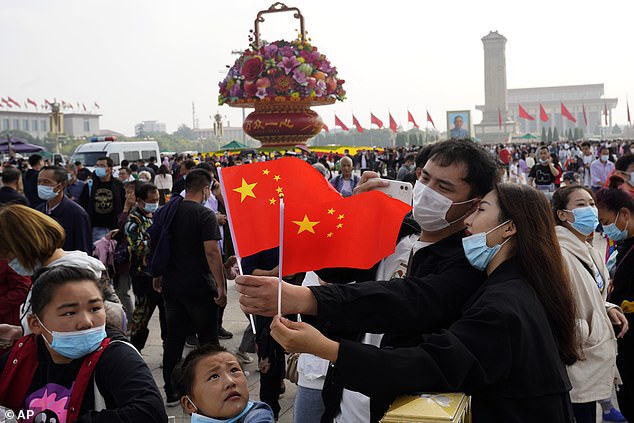 But the absence of their tourist dollars this year will leave regional nations — from Thailand to Cambodia — wincing from the economic pain caused by the prolonged closure of borders.

At Beijing’s Capital Airport — whose check-in rows and aisles were empty in February — thousands of passengers queued up with their luggage and children in tow.

Life in the Chinese capital has gradually returned to normal after ghostly scenes of empty roads in January and February, and a second virus outbreak in June.

The once eerily empty streets in the city’s financial district are packed, previously deserted malls are full of shoppers and ice rinks have filled with children learning to skate again.

Chinese retail sales edged back to growth in August for the first time since the pandemic struck, signalling a rebound for the world’s second-largest economy.