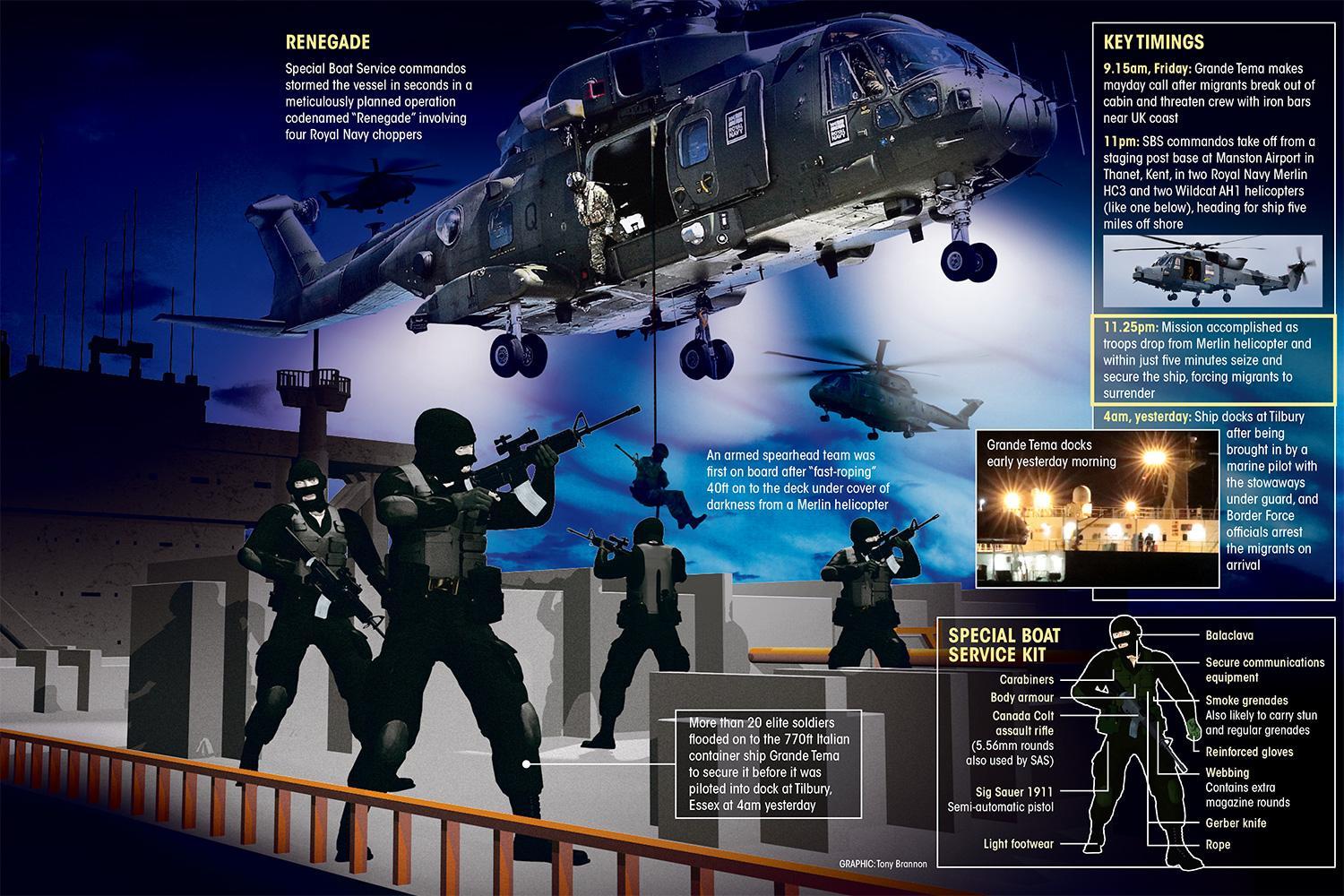 The African stowaways had threatened crew with iron bars on the Grande Tema in the English Channel on Friday. 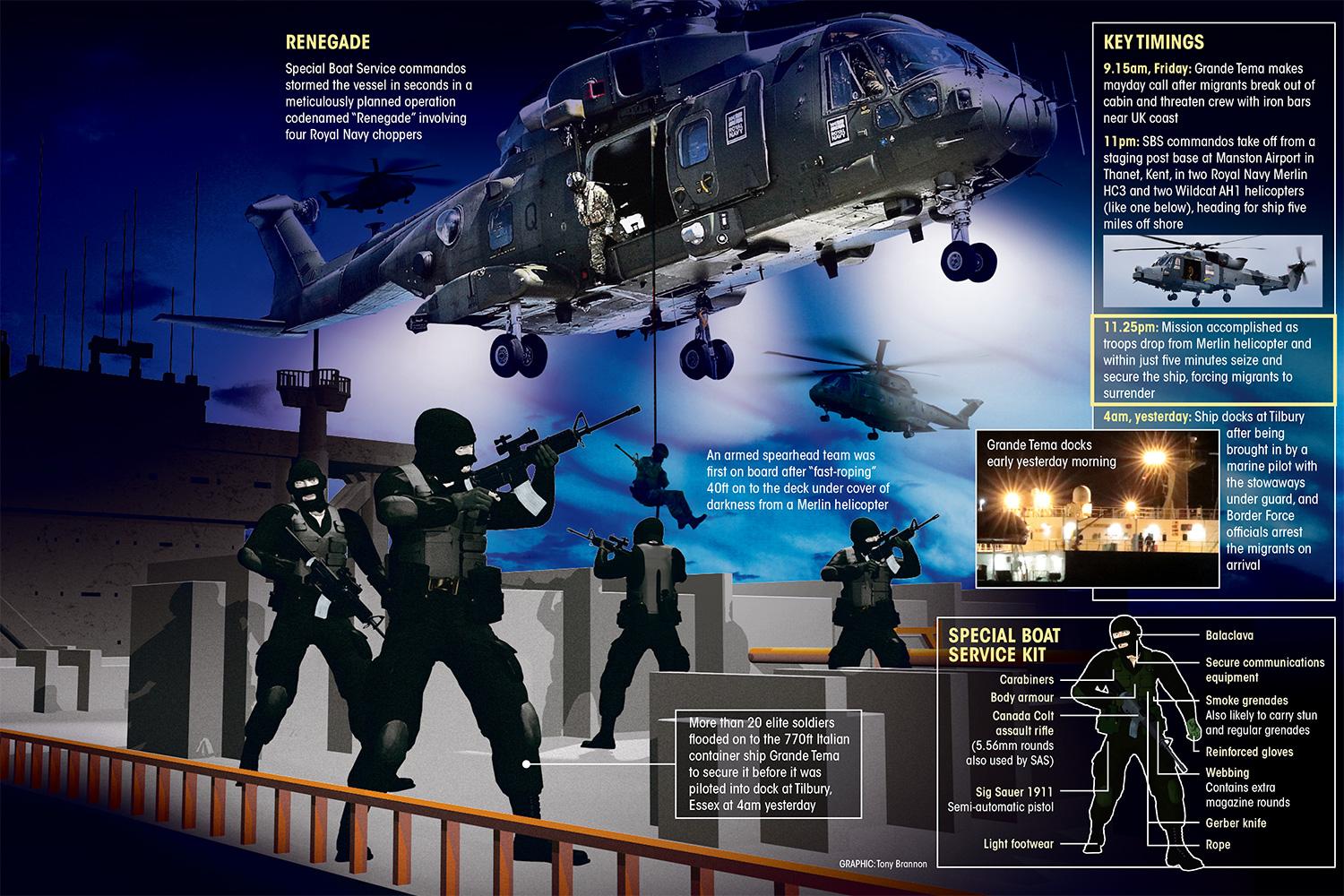 But they meekly surrendered when black-clad SBS troops swooped down silently from a Merlin heli-copter later that night.

A message went out to the elite fighters as they flew back after the “textbook” Operation Renegade mission declaring: “Pirates 0 – SBS 4.”

A military source told The Sun on Sunday: “The stowaways had been threatening the crew with iron bars but surrendered to overwhelming military force in seconds.

“It went like clockwork and it’s a great tribute to the team’s professionalism that the stand-off was resolved quickly without anyone being harmed. 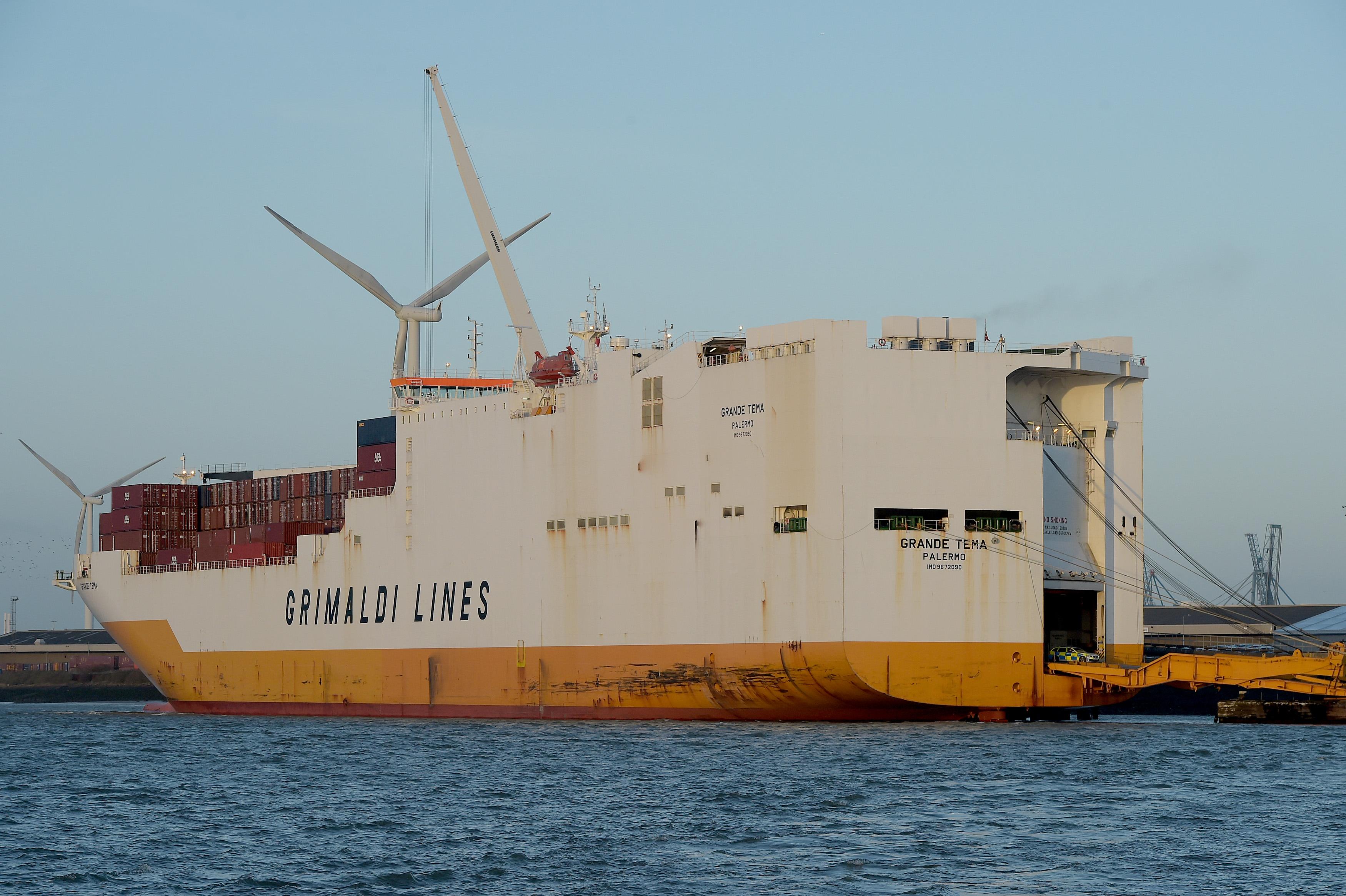 “The Merlin was purpose-built for siege situations at sea like this and was the perfect tool for the job.”

The 71,543-ton Italian cargo ship was heading to Tilbury, Essex, from Lagos, Nigeria, when the stowaways were found on Tuesday.

The Italian and Filipino crew locked them in a cabin but the four broke out and armed themselves with metal poles as it approached the UK on Friday morning.

They demanded to be brought nearer shore but the 27-strong crew locked themselves on the bridge. 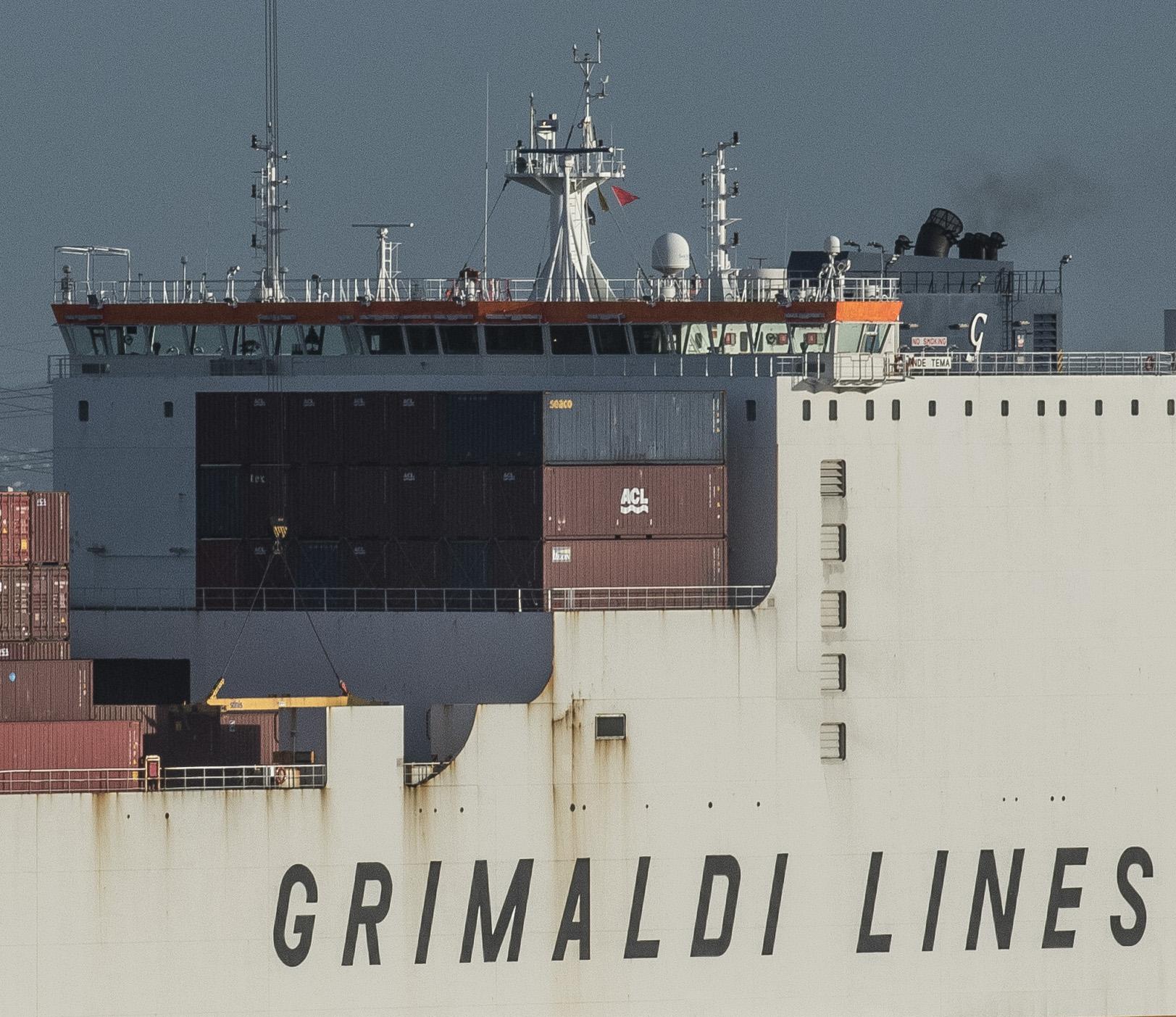 The ship’s master then sent out a mayday, echoing the plot of Tom Hanks’ 2013 hijack blockbuster movie Captain Phillips.

Authorities ordered the ship to circle outside the Thames Estuary, five miles offshore before Theresa May approved the deployment of the SBS’s Sabre Squadron.

The operation was launched around 11pm when two Royal Navy Merlin HC3s and a pair of Wildcat AH1 helicopters took off from Manston Airport in Kent.

Lifeboats and a pilot ship carrying more SBS troops had already set off from Tilbury to marshal the choppy waters in case migrants jumped overboard. 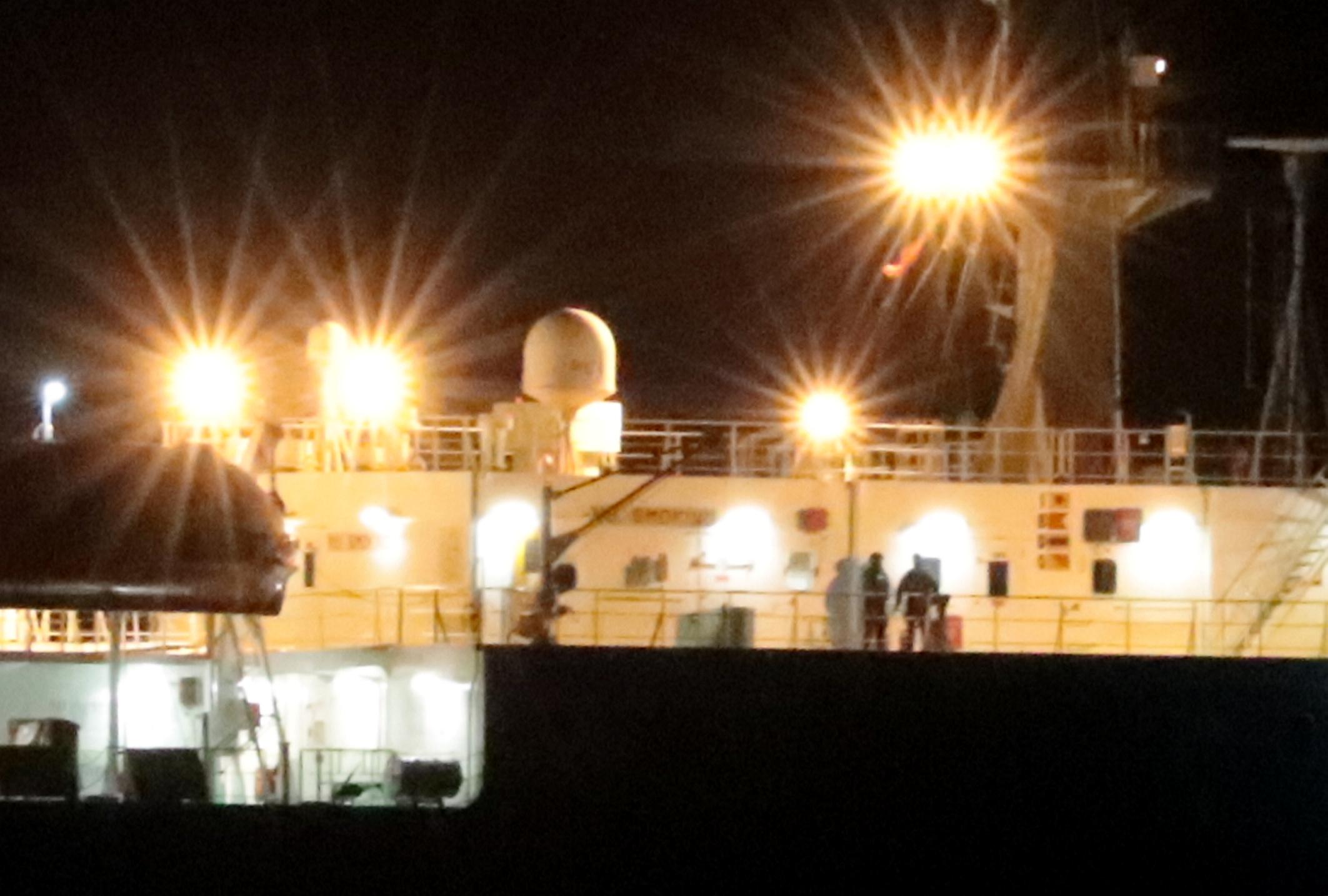 It was used as a “decoy”, tricking the stowaways into thinking it was there to lead them safely into port.

But a Merlin then swooped in — and seconds later a dozen commandos on ropes dropped silently on board from 40ft.

Ark lights from the choppers lit up the vessel and the migrants dropped their makeshift weapons and threw up their hands.

More SBS troops boarded the ship, which was searched and secured within five minutes before it was safely piloted to Tilbury.

Essex Police later confirmed four men had been detained under the Immigration Act and nobody had been injured.

In January 2017, SBS units — the Royal Navy’s equivalent of the SAS — took part in a “Code Sierra” exercise off Dover in which a terrorist siege was replicated on a cross-Channel Ferry. 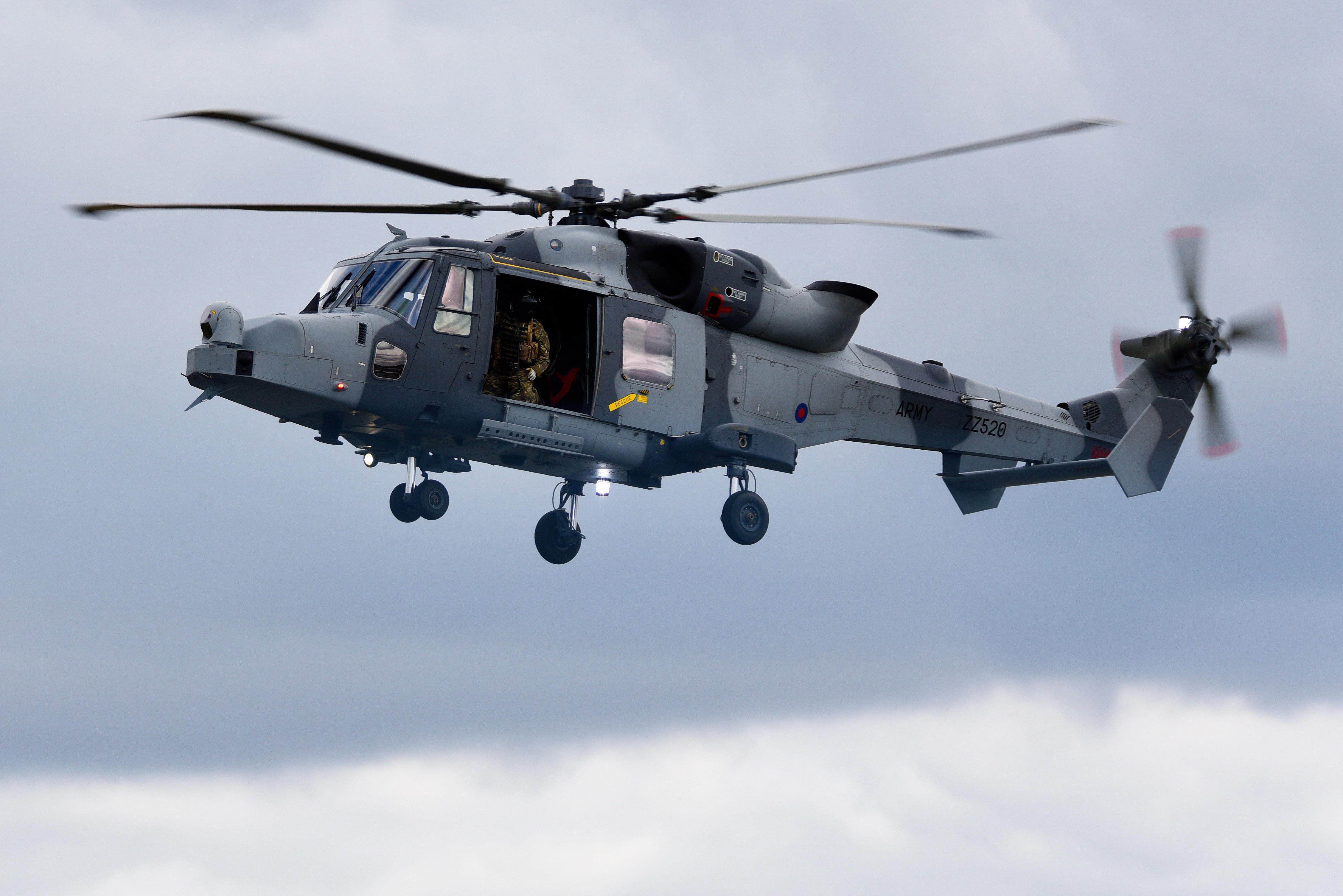 Marine photographer Nigel Scutt, 52, who runs the page, said: “During the Code Sierra exercise SBS teams simulated a full-scale assault on terrorists on board a ferry and had a full-on battle with paintball guns.

So taking on four migrants with iron bars wouldn’t have taxed them too much.

“There were obvious risks boarding the vessel in choppy waters at night and concern for the crew who were being threatened.

“But no one in his right mind would take on the SBS armed with metal poles and iron bars. 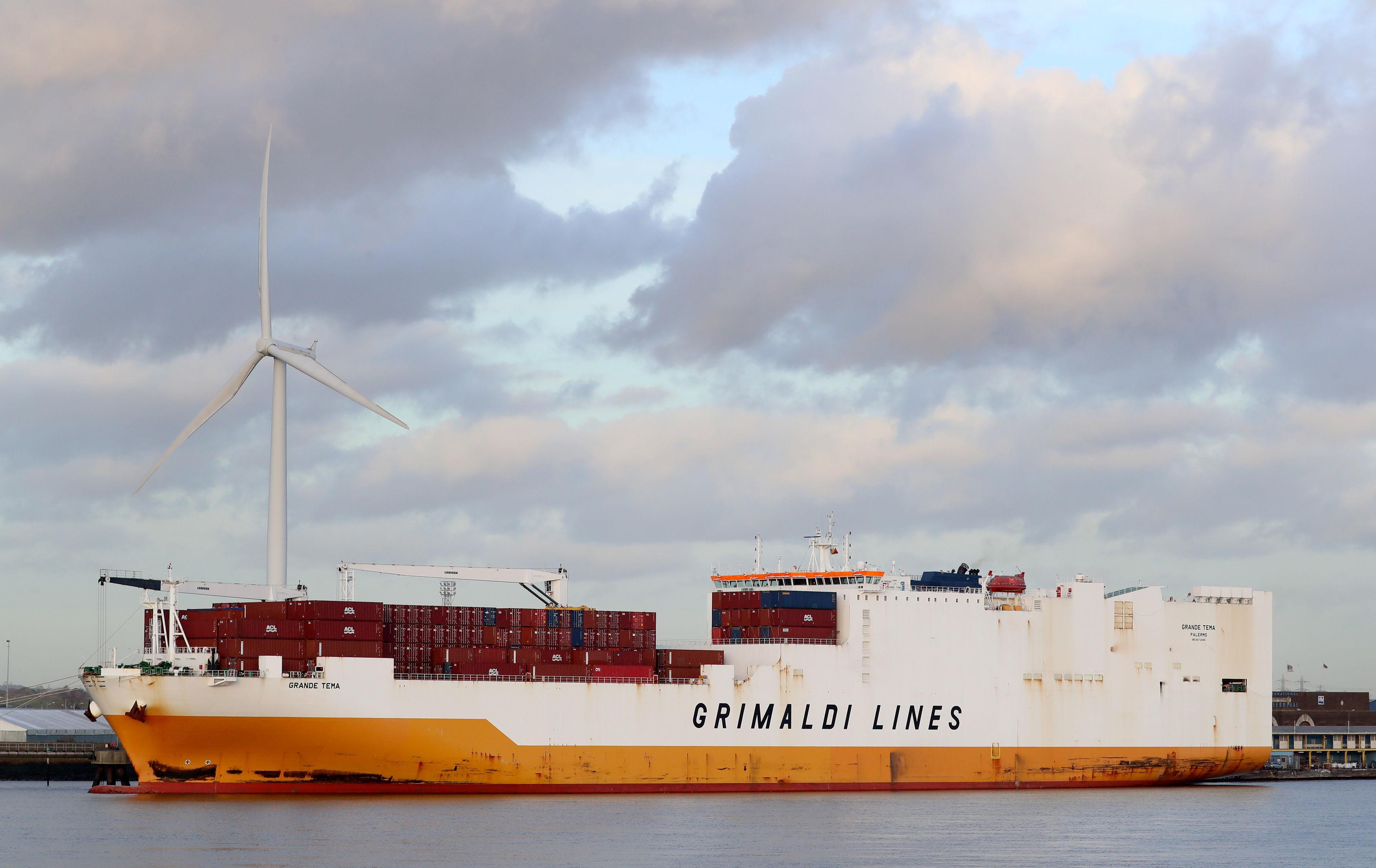 "It’s no wonder it was over so quickly without anyone being harmed.”

The Grande Tema, based in the Sicilian city of Palermo, was carrying cars, vans and earth-moving equipment to the UK.

The four migrants are believed to have sneaked on board either at the start of the journey in Lagos, or during three other stops on the West African coast.

The ship is believed to have been told to stay off-shore during the migrant siege because its cargo also included potentially hazardous material. Paul Kyprianou, a spokesman for the ship’s Naples-based operator Grimaldi Lines, told yesterday how the migrants were compliant when initially found.

However they turned nasty when the ship neared the UK coast.

Mr Kyprianou said: “It was extraordinary.

"We have had cases of stowaways but never cases of people getting violent.

“At the beginning they weren’t violent.

"We gave them accommodation and food.

"They were calm — but then when the vessel was closer to shore they changed their behaviour.

“As soon as they got close they managed to break the door of the cabin and escape. 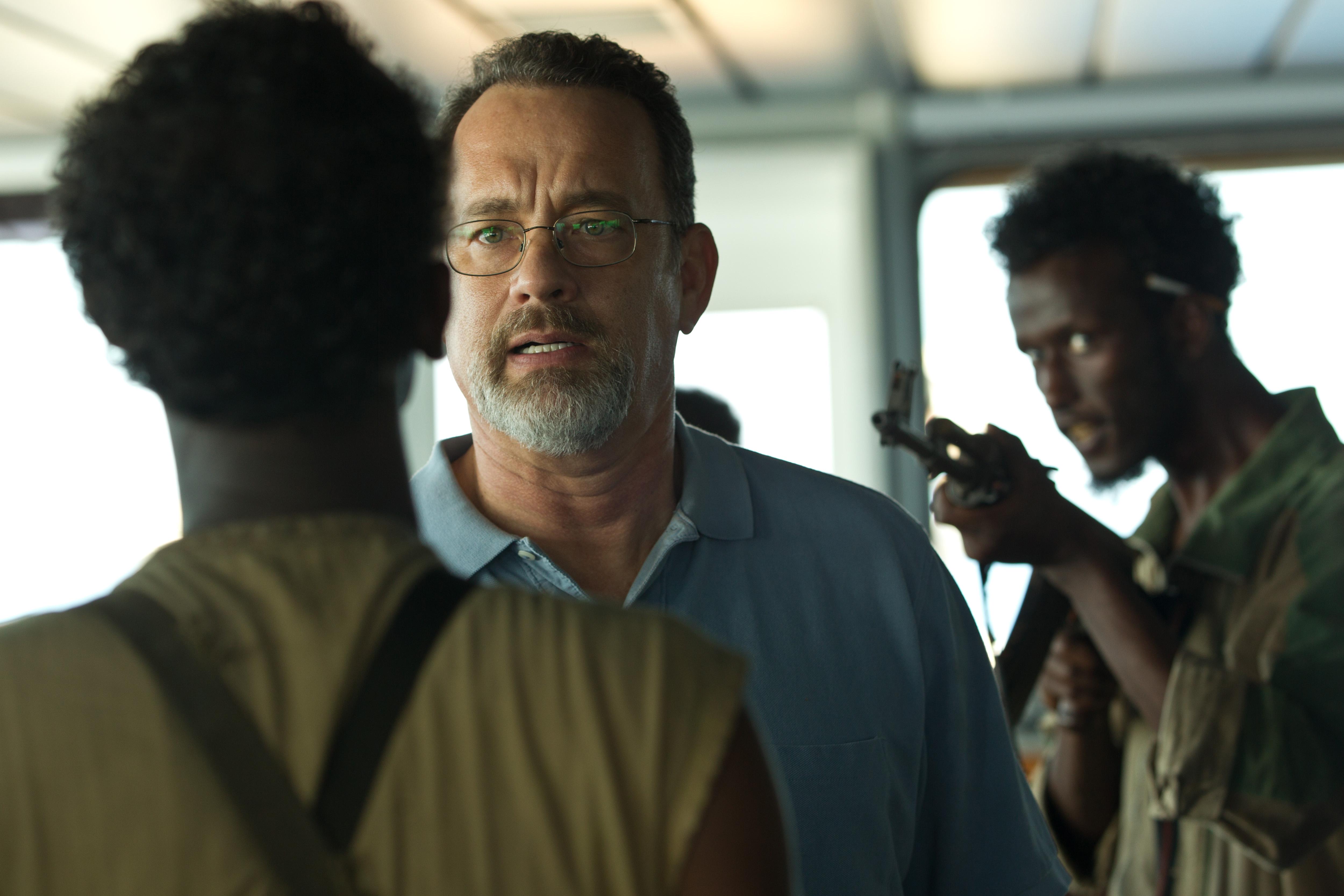 “They took some iron bars and became violent, asking the vessel to get closer to the shore.

We guessed that they wanted to jump and swim to escape.

"They were young and African.

"They probably managed to board the vessel in Lagos.

"We had no clashes, no injuries — nothing.

The four were last night being held by UK Border Force officials.