‘How many more lives?’: Reactions to Texas school shooting

United States officials and members of Congress have reacted to the Texas school shooting that killed 18 children and one adult in Uvalde. 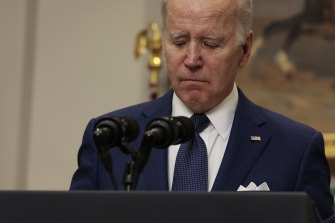 President Joe Biden spoke about the shooting from the White House.Credit:Getty

“I hoped when I became president I would not have to do this, again,” Biden said, decrying the death of “beautiful, innocent” second, third and fourth graders in “another massacre.”
Their parents “will never see their child again, never have them jump in bed and cuddle with them,” he said.
“As a nation, we have to ask, ‘When in God’s name are we going to stand up to the gun lobby?'”
“We have to act,” he said and suggested reinstating the assault weapons ban and other “common sense gun laws.”

“Nearly ten years after Sandy Hook — and ten days after Buffalo — our country is paralyzed, not by fear, but by a gun lobby and a political party that have shown no willingness to act in any way that might help prevent these tragedies. It’s long past time for action, any kind of action. And it’s another tragedy — a quieter but no less tragic one — for families to wait another day.”

“Enough is enough … As a nation, we have to have the courage to take action and … to ensure something like this never happens again.”

“Spare me the bullshit about mental illness … We don’t have any more mental illness than any other country in the world. You cannot explain this through a prism of mental illness because we’re not an outlier on mental illness. … We’re an outlier when it comes to access to firearms and the ability of criminals and very sick people to get their arms on firearms. That’s what makes America different.” 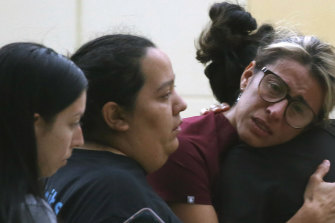 “Grief overwhelms the soul. Children slaughtered. Lives extinguished. Parents’ hearts wrenched. Incomprehensible. I offer prayer and condolence but know that it is grossly inadequate. We must find answers.”

“My heart breaks for the families who sent their children and loved ones off to school today at Robb Elementary School in Uvalde, Texas, whose lived will now never be the same.

“We owe these families – and the families who have experienced similar losses, including as recently as last week in Buffalo – action. Enough is enough. The American people overwhelmingly agree. Our elected leaders at the local, state and federal levels, regardless of party, must find common-sense ways to keep our children and communities safe. They can do so without touching the right to hunt, sport shoot, and keep guns for self-defence. Propaganda and paranoia have kept us from helping each other in this for too long. We can do – and be – better.

“This shooting stole the futures of children, who won’t experience joys of graduating from school, chasing a career, falling in love, even starting a family of their own. We hold close all who have lost a loved one to gun violence, as this horrible crime deepens their suffering.”

“How many more times will Senate Republicans express outrage at horrific shootings like the one today in Uvalde, Texas, and then block meaningful, bipartisan background-check legislation supported by nine out of ten Americans and most responsible gun owners?” he said in a statement. “How many more times?”

“That makes no sense at all, why we can’t do common-sense, common-sense things and try to prevent some of this from happening.”

“How many more lives? How many more children? And how much longer before we reject the choices that have made ours the one country where this happens routinely? It is not inevitable, it is horrific. It must end.”

“Texans are grieving for the victims of this senseless crime & for the community of Uvalde.
“Cecilia and I mourn this horrific loss and urge all Texans to come together.”

“Horrified and heartbroken by reports of the disgusting violence directed at innocent schoolkids in Uvalde, Texas. The entire country is praying for the children, families, teachers, and staff and the first responders on the scene.”

“Heidi and I are fervently lifting up in prayer the children and families in the horrific shooting in Uvalde. We are in close contact with local officials, but the precise details are still unfolding. Thank you to heroic law enforcement and first responders for acting so swiftly.”

“I’m grateful to law enforcement and everyone who worked to stop the shooter, as well as the medical staff working now to prevent further loss of life. I join my fellow Texans in lifting up the entire Uvalde community during this unimaginable tragedy.”

“I ask you all of you to join me in praying for our fellow Texans impacted by the horrific shooting in Uvalde today. Lord, our refuge and strength, we pray for the souls of those lost, those who were wounded, their families, and our brave first responders.”

'This Is Us' Season 6 Episode 18 Recap: The Series Ends With a Funeral and a Lazy Saturday in 'Us'