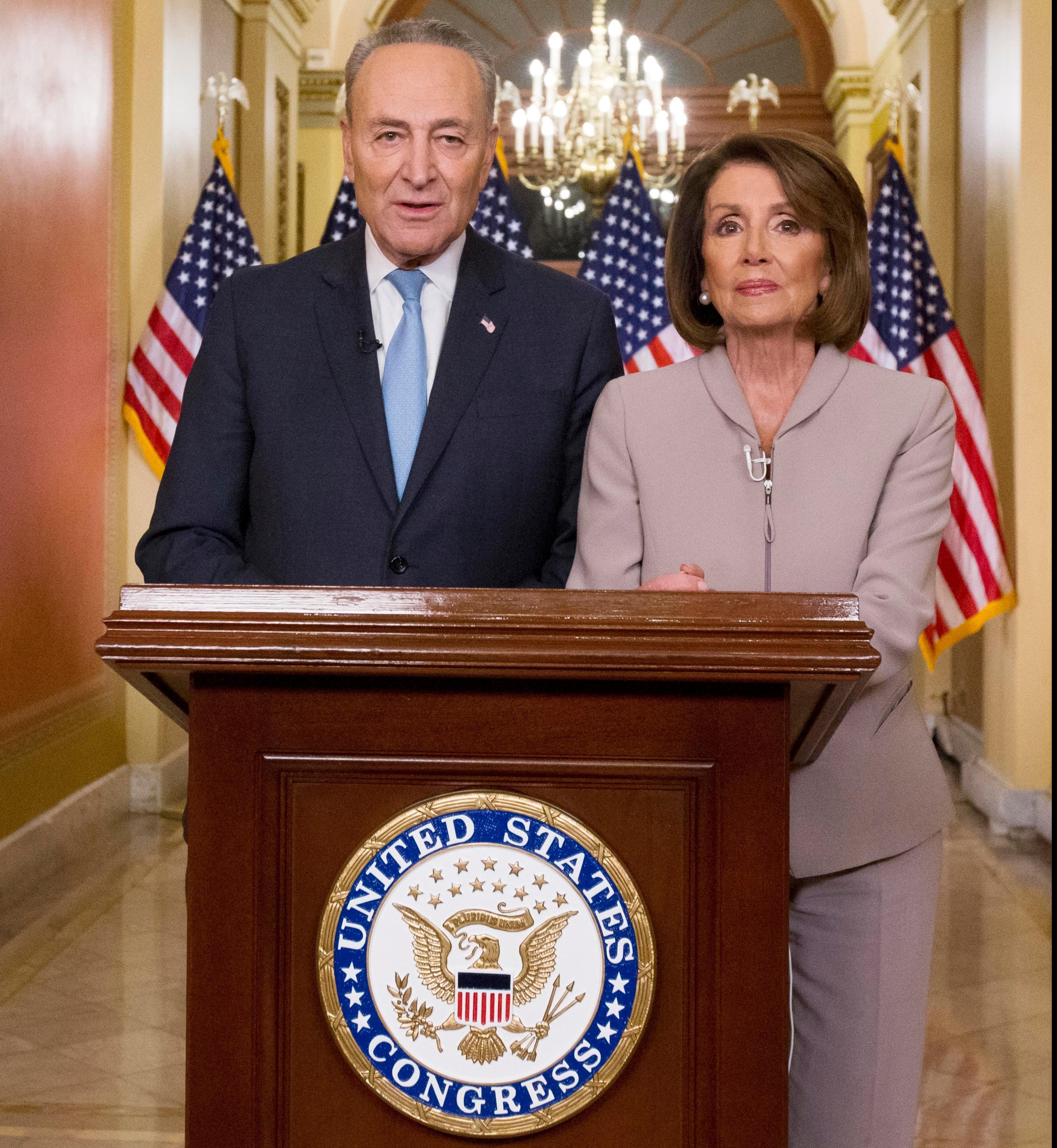 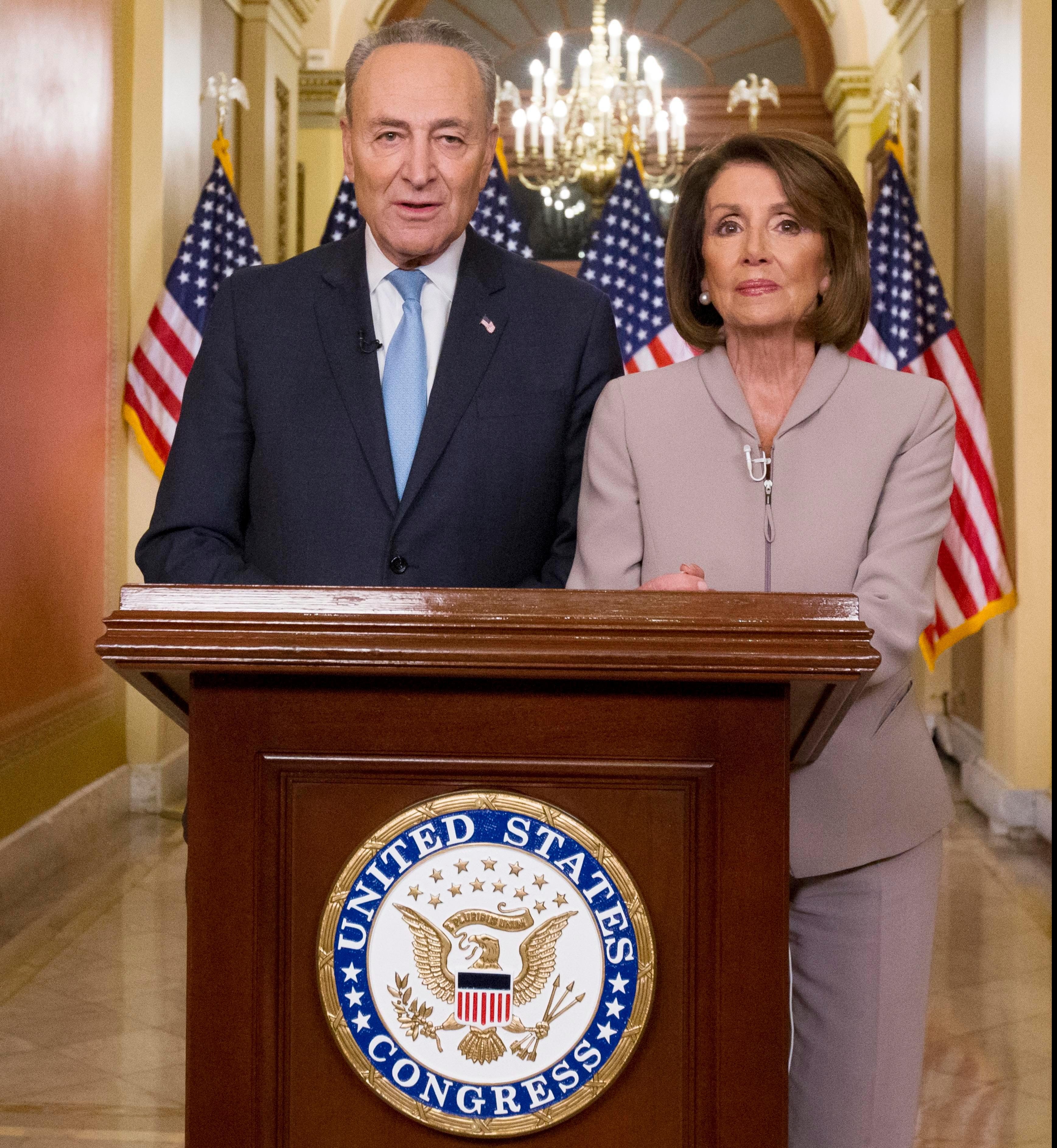 They spoke on US television in response to Mr Trump's unusual primetime address to the nation from the Oval Office on the 18th day of a government shutdown stalemate.

Some departments have ground to a halt as Congress clashed over the president's demand for $5.7billion (£4.5billion) to pay for a barrier on the southern border.

Mr Trump said all Americans are hurt by uncontrolled illegal immigration and blamed Democrats for the shutdown.

He claimed there was a "growing humanitarian and security crisis" on the frontier but stopped short of declaring a national emergency as some had feared. 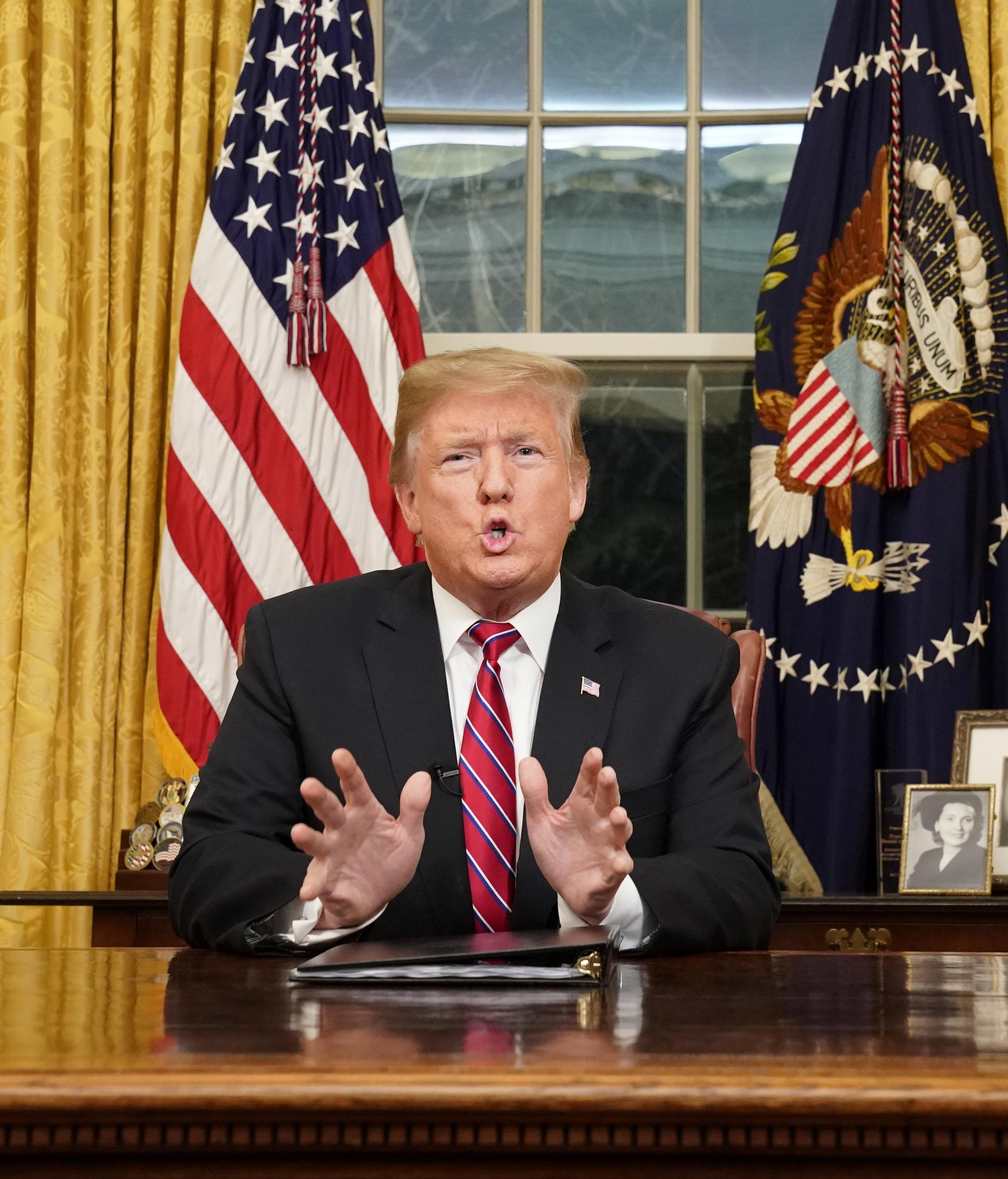 In their rebuttal, Democrats laid into Mr Trump for "stoking fear to divert attention from the turmoil in his administration".

Mr Schumer said: "The President of the United States – having failed to get Mexico to pay for his ineffective, unnecessary border wall, and unable to convince the Congress or the American people to foot the bill – has shut down the government.

He went on: "We can secure our border without an expensive, ineffective wall. And, we can welcome legal immigrants and refugees without compromising safety and security.

"The symbol of America should be the Statue of Liberty, not a 30ft wall."

Ms Pelosi, re-elected Speaker after Democrats seized the House of Representatives in November's midterm polls, demanded: "President Trump must stop holding the American people hostage, must stop manufacturing a crisis, and must re-open the government."

She said the president's statements during the partial shutdown have been "full of misinformation and even malice," and accused the administration of pursuing "cruel and counterproductive policies" at the Mexico border.

She said: "The fact is, the women and children at the border are not a security threat, they are a humanitarian challenge." 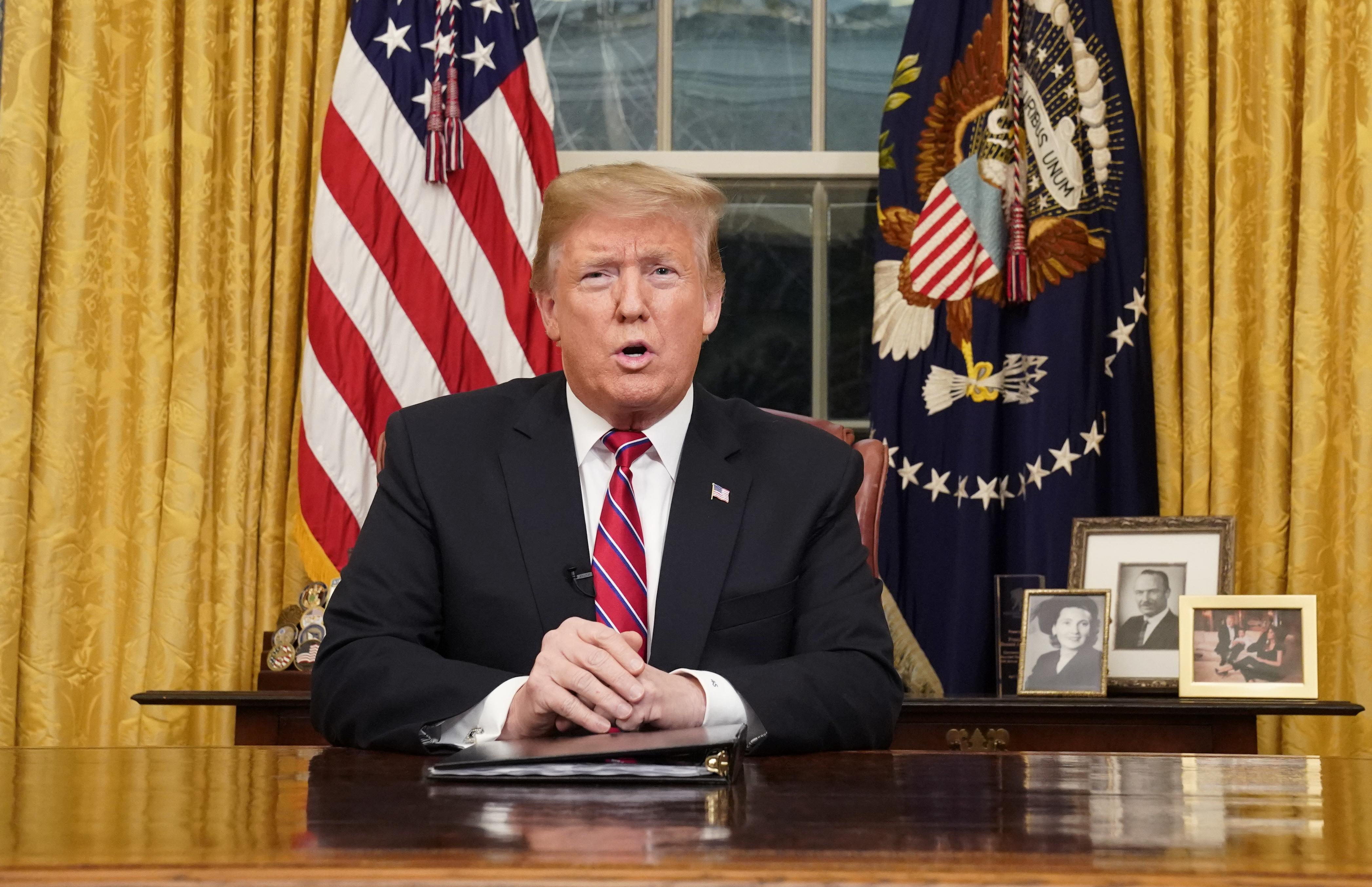 In a separate rebuttal, 2020 presidential contender Bernie Sanders said government employees "deserve to be treated with respect, not held hostage as political pawns."

He said: "President Trump has stated tonight, and, over and over again in recent weeks, that this country faces a national emergency.

"Well, he’s right. But it’s an emergency and a crisis that he himself has created."

Some 800,000 federal employees are working without pay or have been put on leave at dozens of agencies while Congress withholds funds.

Democrats and Republicans blame each other for the stalemate, which has lasted almost as long as the record 21-day shutdown from December 1995 to January 1996. 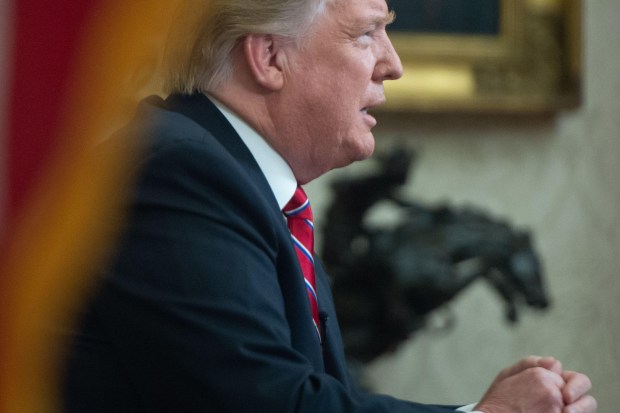 "Over the years, thousands of Americans have been brutally killed by those who illegally entered our country, and thousands more lives will be lost if we don't act right now."

"The border wall would very quickly pay for itself. The cost of illegal drugs exceeds $500 billion a year vastly more than the $5.7 billion we have requested from Congress."

"How much more American blood must we shed before Congress does its job?"

"To every member of Congress: Pass a bill that ends this crisis."

"To every citizen: Call Congress and tell them to finally, after all of these decades, secure our border."

"When I took the oath of office, I swore to protect our country. And that is what I will always do, so help me God."

In his nine-minute address last night, Mr Trump said it was "immoral" for politicians "to do nothing and continue to allow more innocent people to be so horribly victimised" by the drugs and criminals he claims are streaming across the border.

He said: "Every day customs and border patrol agents encounter thousands of illegal immigrants trying to enter our country.

"We are out of space to hold them and we have no way to promptly return them back home to their country. 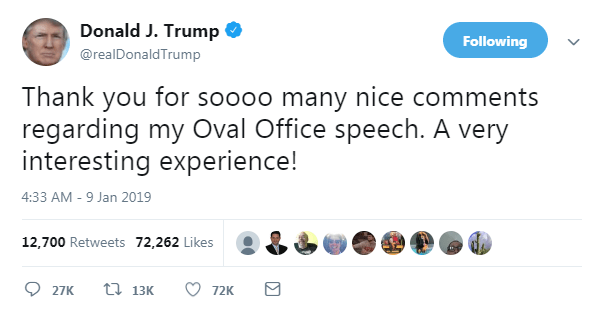 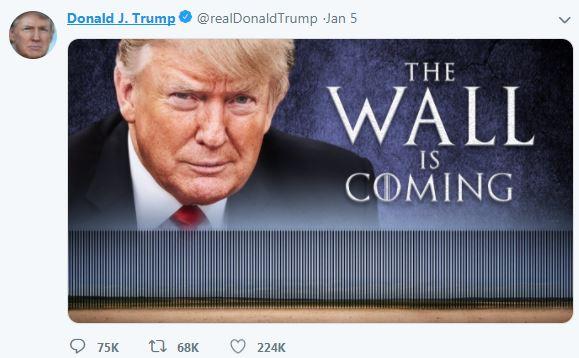 "America proudly welcomes millions of lawful immigrants who enrich our society and contribute to our nation.

"But, all Americans are hurt by uncontrolled illegal migration. It strains public resources and drives down jobs and wages."

Elsewhere in his address, President Trump listed a series of gruesome crimes he said were committed by illegal immigrants.

He added: "How much more American blood will be shed before Congress does its job?"

His vow to "build the wall" was a key campaign slogan in 2016 but he has failed in his promise to "make Mexico pay for it" and Congress has refused to make taxpayers' money available.

A crunch meeting with Democrats today has been called in the hopes of resolving the crisis.

Mr Trump has scheduled a trip to the border on Thursday to highlight his demands for a physical barrier.

On Monday, Vice President Mike Pence said Trump had not made a decision about his threat to declare a national emergency and build a wall without congressional approval.

Asked about the possibility of legal challenges and whether the White House counsel's office had reviewed the matter thoroughly, Pence told reporters: "They're looking at it, and the President is considering it."