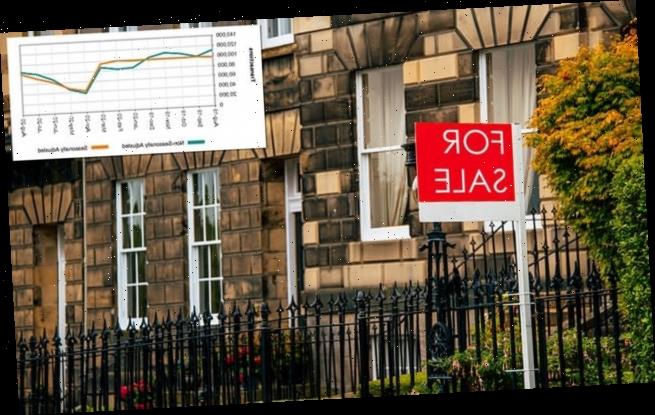 House sales rise in August after stamp duty holiday but are still down 16 per cent compared to 2019, new figures show

UK house sales rose by 15.6 per cent in August after the Government introduced a temporary stamp duty holiday for residential properties worth up to £500,000, it has been revealed.

Figures from HM Revenue and Customs found the move, which will last until March 31 2021, saw an estimated 81,280 sales take place in August and also helped to protect nearly 750,000 jobs in the housing sector and wider supply chain.

However transactions were still down by 16.3 per cent compared with the same month in 2019, figures show. 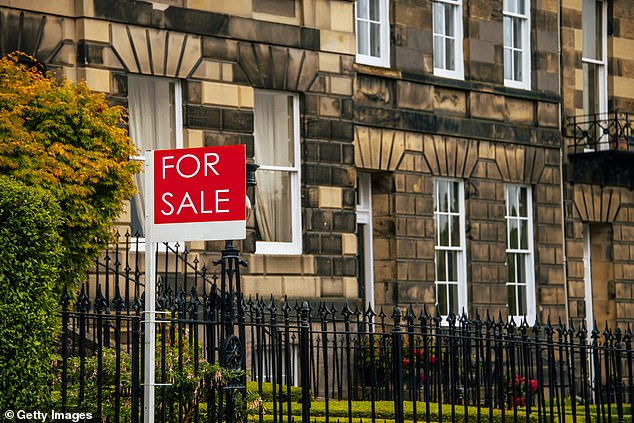 House sales in the UK rose by 15.6 per cent in August after the introduction of a temporary stamp duty holiday 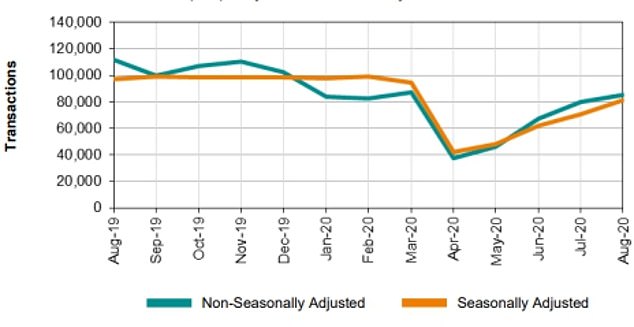 Total UK residential property transactions saw an increase in August 2020 compared with those in July. While the transactions have gradually increased month-on-month they still below levels observed in recent years

On July 8, the threshold for stamp duty, which applies in England and Northern Ireland, was raised to £500,000.

The holiday means nine out of ten people getting on or moving up the property ladder will pay no stamp duty, according to the Treasury. The average saving has been put at £4,500.

Chancellor Rishi Sunak said: ‘Owners doing up their homes to sell and buyers reinvesting stamp duty savings to make their new house feel like a home are also firing up local businesses, supporting, creating and protecting jobs across the country.’

Strict social distancing measures were introduced for the property market from March 26 due to the coronavirus pandemic.

Measures were eased from May 13 in England, and the market gradually reopened later in Scotland, Wales and Northern Ireland. 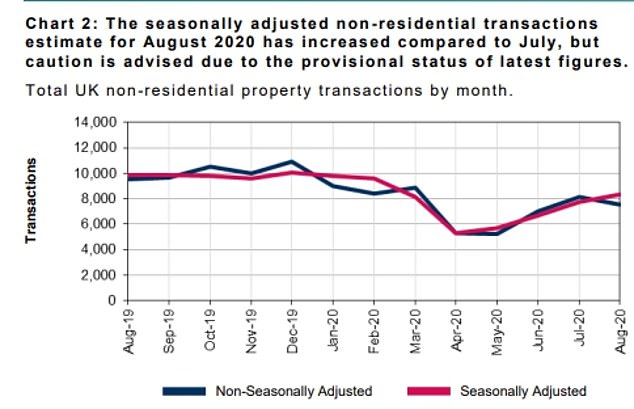 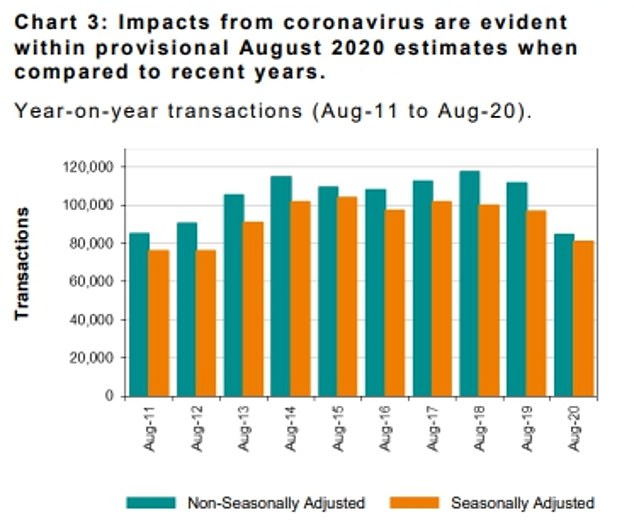 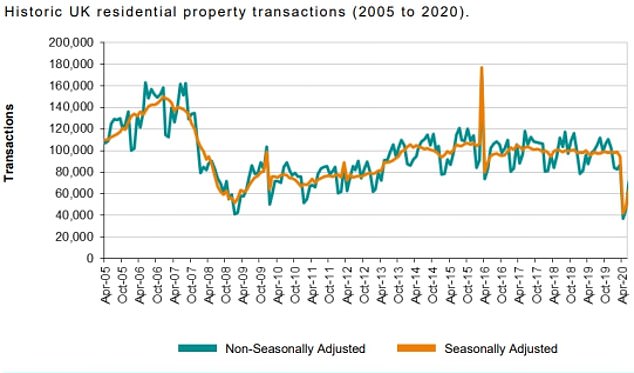 Data showed residential transactions decreased in April 2020 due to the impact of coronavirus and public health measures but have since gradually increased month-on-month. The figures are still below levels observed in recent years

Mike Fairman, CEO at Checkatrade, said: ‘Since the Government’s stamp duty changes came into effect earlier this year, we’ve seen record numbers of home improvement inquiries to the site suggesting that consumers are planning to reinvest their stamp duty savings straight back into their homes.’

Mark Harris, chief executive of mortgage broker SPF Private Clients, said: ‘Despite only being introduced the previous month, the stamp duty holiday was already filtering through to transaction numbers in August as buyers rushed to take advantage of the saving.

‘Despite the recovery in number of transactions compared with the previous month, the pandemic has had a significant impact on the market with August’s numbers down significantly on last year’s.

‘The data illustrates just how long it takes for property transactions to complete and at the moment, with some lenders struggling with service levels, along with surveyors and lawyers, it is all taking longer than it usually would.

‘Buyers need to be patient, as well as engage good advisers who can help steer the transaction through in as prompt a fashion as possible.’

Joshua Elash, director of property lender MT Finance, said: ‘The significant rise in house sales in August compared with the previous month reflects a positive response to the Chancellor’s stamp duty initiative in the short term but sadly, it is not sustainable.

‘With the ongoing threat of further and more serious lockdowns looming, combined with the end of the furlough scheme in coming weeks, this may represent the peak of transactional activity before what will be an unpleasant fall in the final quarter of the year.’

‘On the ground, we have noticed no sign of sales collapsing, renegotiating on deals or price reductions in the past few days – more of a determination to carry on.’

Nick Leeming, chairman of Jackson-Stops, said: ‘Our own data is in line with today’s figures and shows a steady rise in market activity, with accepted offers and new listings up month-on-month across the Jackson-Stops network.

‘Despite this, the lingering impact of the housing market lockdown is also clear from today’s data.

‘Residential transactions in August were still lagging behind 2019 figures, but we expect this to correct itself in the coming months with a flurry of transactions likely to be recorded in September.

‘Looking ahead to the rest of the year, we can expect to see a bounce in the autumn as pent-up demand continues to build. With people spending far longer in their homes than usual, many home owners are likely to get itchy feet where their current property is no longer suitable for their needs or lifestyle.’

He added: ‘Towards the end of the year, buyers will be looking to move particularly quickly to ensure they secure their dream property ahead of the stamp duty holiday coming to an end in March 2021.’

Anna Clare Harper, CEO of asset manager SPI Capital said: ‘For investors, it is becoming increasingly important to understand both the bigger picture and local variations.’