You can watch today's hearing live right here from 10am:

But in some good news, the state's coronavirus cases are continuing in the right direction.

Victoria recorded 12 new cases in the last 24 hours, down from 15 yesterday.

Jenny Mikakos is yet to face the hotels inquiry this morning, and it's already been a tough morning.

Secretary of the Health Workers Union Diana Asmar has written to Premier Daniel Andrews calling on him to oust Ms Mikakos for "breathtaking incompetence".

The letter was prompted by a meeting between Ms Mikakos and the union on Monday over plans for a Public Private Partnership with rebuilding plans for Frankston Hospital.

"Leaving aside the issue of privatising non-clinical public health jobs in the middle of a pandemic and a failure to consult … Ms Mikakos failed to answer simple questions," the letter reads.

"She had no understanding of the difference between clinical roles and non-clinical roles within a hospital, nor could she comprehend the details of the PPP proposal.

"She instead referred to scripted notes 'thanking frontline hero health workers for their had work'."

Will the inquiry finally hear who was responsible?

Our legal affairs reporter Tammy Mills says one of the main things to watch for today is how Minister Jenny Mikakos responds to the question of responsibility and accountability for the decisions her Health Department made in hotel quarantine.

Both Police and Emergency Services Minister Lisa Neville and Jobs Ministers Martin Pakula said yesterday the Department of Health and Human Services had overall responsibility for the program. But the head of the Health Department, secretary Kym Peake, said the responsibilities were shared between agencies. 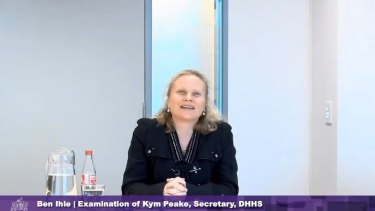 It was revealed yesterday that Ms Peake did not brief her minister on safety concerns in the program that were raised by a senior medical advisor with the backing of Chief Health Officer Brett Sutton in April.

She told the inquiry that she believed the issues had been addressed.

You might remember in early August Ms Mikakos gained some media attention after some late-night tweets about the work of the inquiry.

She said: "I've always striven to be upfront and measured about the challenges facing us. So it pains me to see the incorrect assumption made that somehow I can single-handedly report on actions of countless individuals and many agencies involved in our pandemic response.

"Let the independent judge do her job, let the cards fall where they may. I believe there is nothing to fear in seeking the truth. The truth will set you free."

You can watch today's hearing live right here from 10am:

I'm Hanna Mills Turbet and I'll be with you this morning as we hear evidence from the state's embattled Health Minister Jenny Mikakos, who is facing further scrutiny today after a health union demanded her resignation in an explosive letter to Premier Daniel Andrews.

Our legal affairs reporter Tammy Mills will continue her excellent reporting, while designer Jamie Brown is also on board with his beautiful graphics and embeds.