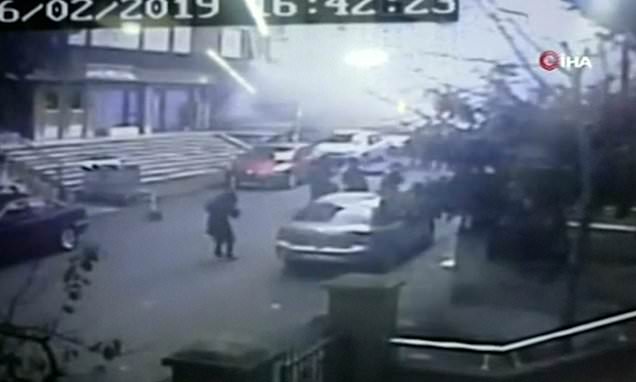 This is the horrifying moment an eight-storey building collapses in Istanbul, leaving at least one person dead and several others trapped under rubble.

Footage shows terrified pedestrians running for their lives and escaping the cloud of smoke and dust as the building crumbles in Turkey’s largest city.

The residential block on the Asian side of the city was home to 43 people living in 14 apartments, with an illegal textile workshop on the ground floor. 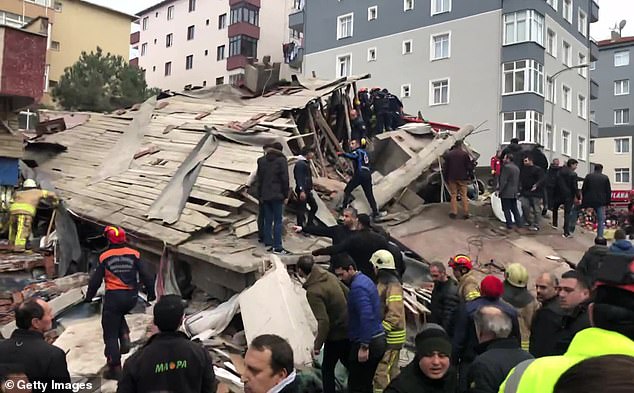 Emergency: Rescue workers working in the rubble after an eight-storey residential block came crashing to the ground in Istanbul 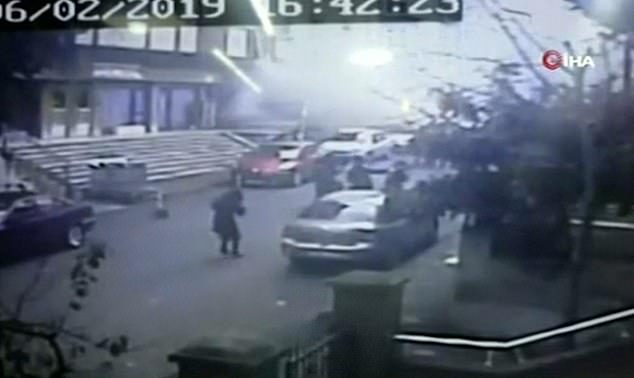 Collapse: CCTV footage has revealed the horrific moment the eight-storey building came crashing down in a disaster in Istanbul which has killed at least one person

The CCTV footage of the building’s collapse begins with nothing apparently amiss as pedestrians stroll past it with cars parked in the street.

But within seconds the building is toppling as the bottom storey gives way and the facade comes tumbling down.

People immediately start to flee the scene as a cloud of smoke and dust obscures the front of the building.

One person arrives at the scene and reacts in shock as they see what has happened, before covering their face to protect against the dust.

More people are then seen emerging from the debris, visible only as silhouettes as they try to flee the wreckage. 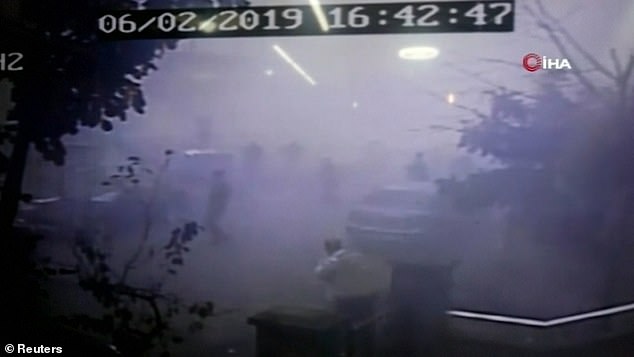 Obscured: People flee for their lives as the smoke and dust from the building hides the damage to the eight-storey block 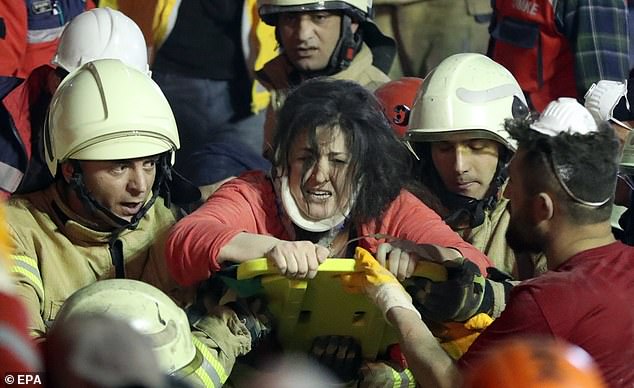 Saved from the rubble: Rescuers carry an injured woman on a stretcher from the site of a collapsed building in the Kartal district of Istanbul 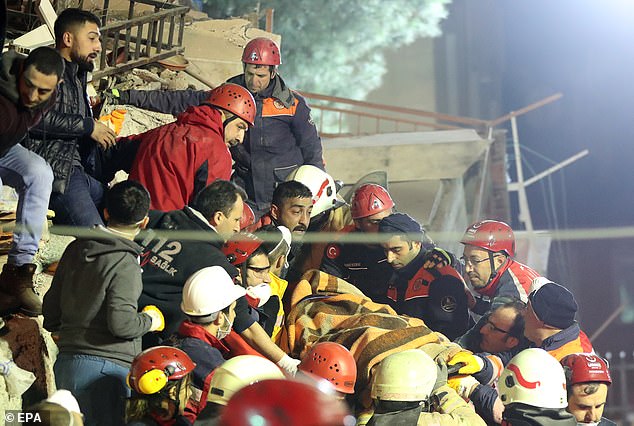 Urgent: Rescuers work together to carry a victim away from the scene on a stretcher 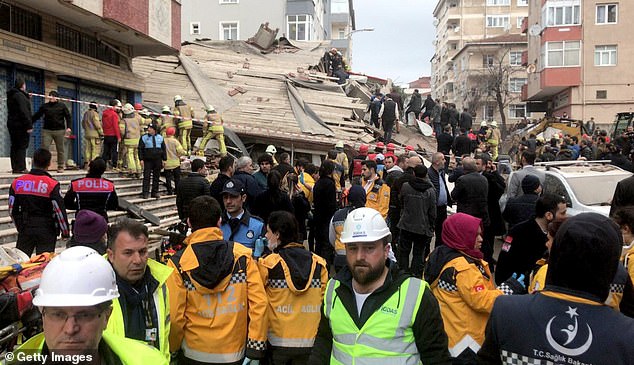 Recovery: Turkish police and emergency services on the scene as rescue workers try to save people from underneath the rubble in Istanbul

Turkish media reported that at least one person was dead and four others were trapped under the debris.

It was not immediately clear why the building, in the Kartal district on the Asian side of the city, had collapsed.

Istanbul Governor Ali Yerlikaya told reporters at the site that 43 people were registered in 14 apartments at the address, but added that the top three floors of the building had been built illegally.

Yerlikaya also said there was a textile workshop on the ground floor of the building that was operating without a license. He declined to comment on the number of casualties. 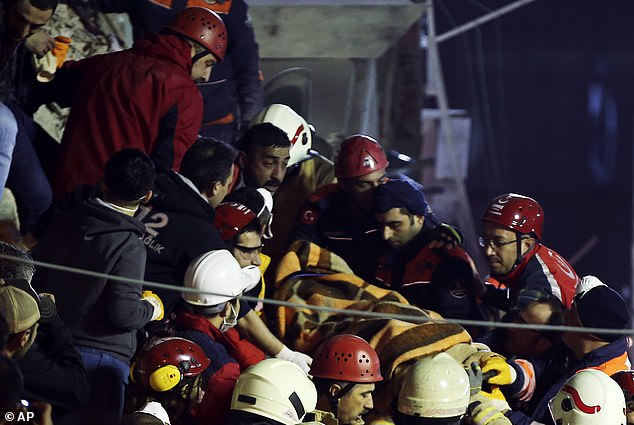 Rescue work: Emergency crews wearing helmets take a victim away on a stretcher at the scene of the building collapse in Turkey 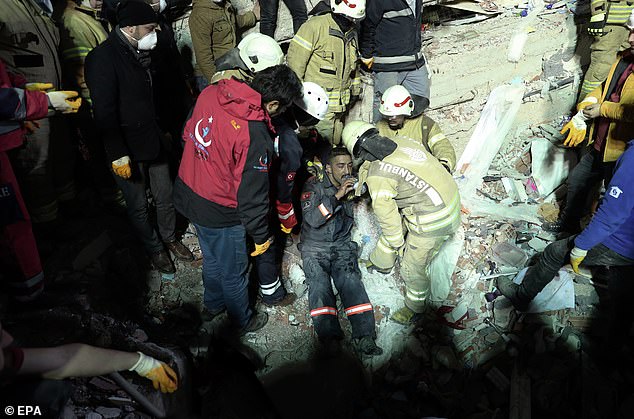 Helping the helpers: Rescuers take care of an apparently exhausted emergency worker (sitting down, centre) at the site of a collapsed building in Kartal district of Istanbul 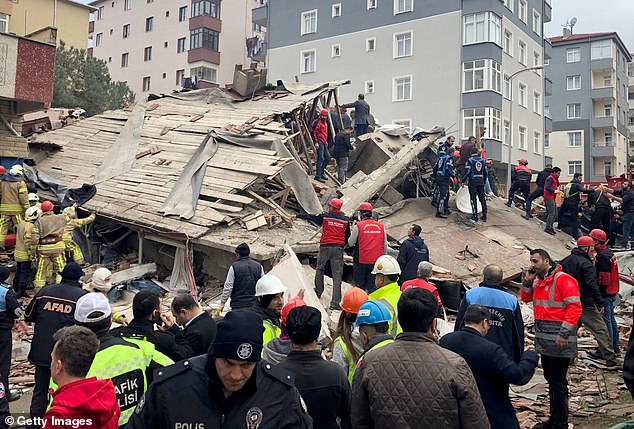 Wreckage: Scores of firefighters, police officials, medical personnel as well as national Disaster and Emergency Management (AFAD) teams are currently at the scene 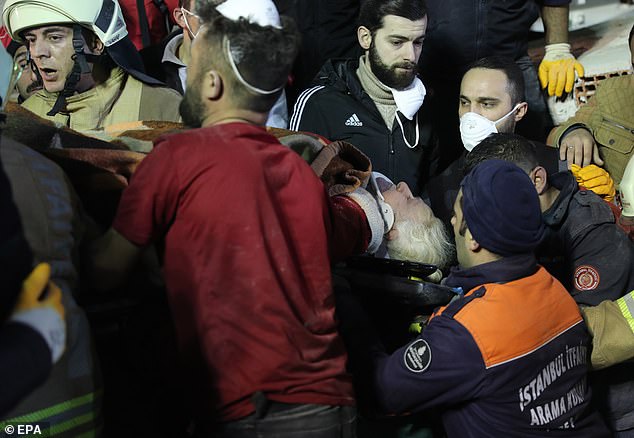 Disaster: Another woman is carried away on a stretcher after the Istanbul building collapse

Additional personnel would be requested from neighbouring provinces if necessary, he said.

President Recep Tayyip Erdogan has sent the interior and environment ministers to the site as the recovery gets underway.

Television footage showed emergency teams pulling a woman out of the rubble as dozens of bystanders watched near the debris.

Aerial views of the area showed roads leading to the building blocked by vehicles and crowds. 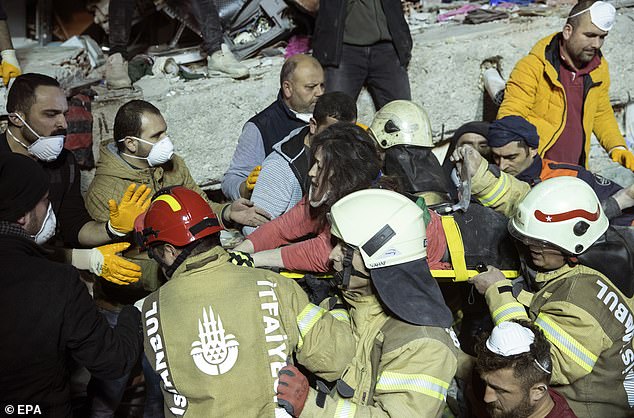 Rescue: Emergency workers take an injured woman away on a stretcher after she was wounded by the eight-storey building’s collapse in Istanbul 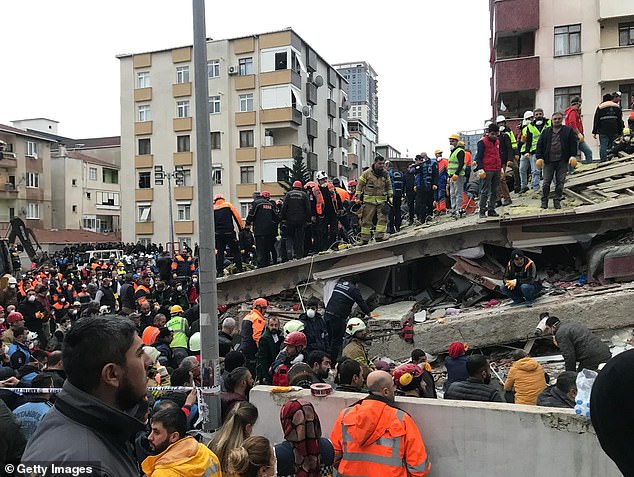 Huge operation: Dozens of rescue workers at the scene after the building collapsed in Istanbul on Wednesday