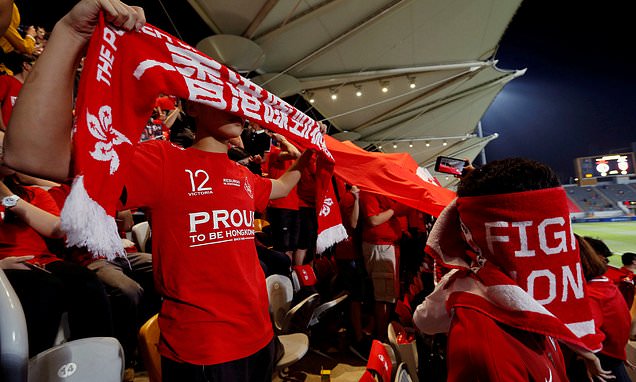 Hong Kong cracks down on protests against Chinese anthem

Hong Kong is preparing a crackdown on protests against the Chinese national anthem after it was repeatedly booed by football fans.

A bill introduced today would punish anyone who ‘publicly and intentionally insults’ the anthem with up to three years in prison.

The measure would also require students to sing and study the song as part of their curriculum.

The proposals have raised concerns about Beijing’s growing influence in the semi-autonomous Chinese territory. 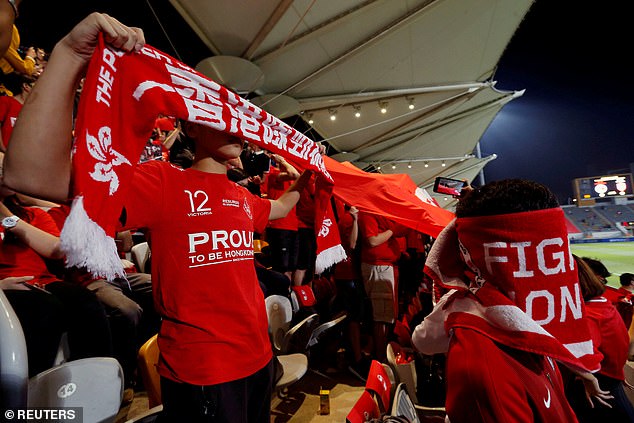 Hong Kong football fans protest the Chinese national anthem during a friendly against Bahrain last year. The territory is preparing a bill which would punish protesters with prison

Heckling China’s national anthem has emerged as a form of protest since Beijing suppressed a pro-democracy movement in the semi-autonomous city in 2014.

Football supporters in the territory had jeered the anthem at the start of international qualifiers, drawing anger from Communist Party leaders in Beijing.

A former British colony, Hong Kong was handed over to Chinese rule in 1997 but enjoys civil liberties such as freedom of the press that are denied in China.

The ‘one country, two systems’ framework is supposed to last for 50 years but has been significantly eroded under authoritarian Chinese leader Xi Jinping, critics say.

‘We’re worried that by passing the bill, people’s right and liberty to express themselves in terms of political ideology will be restricted,’ said Alvin Yeung, a lawmaker in Hong Kong’s Legislative Council, known as LegCo.

‘We are simply deterring people from showing disrespect to the national anthem,’ Chow said. 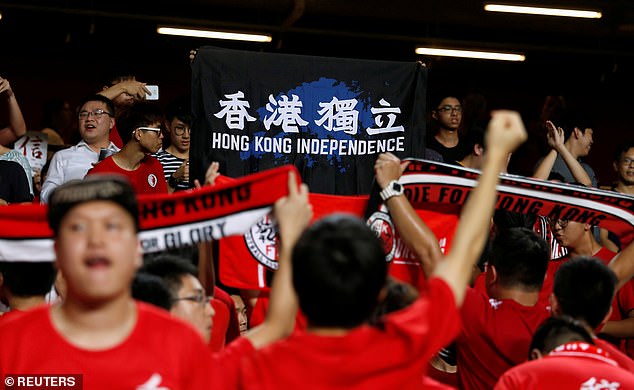 Fans turn their back on the anthem during a qualifying game against Malaysia in Hong Kong. The crackdown comes amid fears of Beijing’s growing influence in the city

The anthem, ‘March of the Volunteers,’ begins with a call for defiance: ‘Rise up, you people who refuse to be subjugated.’

The bill is virtually assured of passage since the legislators who tend to side with Beijing outnumber the pro-democracy camp.

But the law wades into untested waters since it represents Beijing’s first effort at requiring Hong Kong to pass a mainland Chinese law, a potential breach of ‘one country, two systems.’

Newspaper columnists have pointed to the example of American footballers kneeling at the playing of the U.S. anthem as a form of protest that should be tolerated.

Some also decry the Hong Kong bill as carrying the harshest penalty of any jurisdiction that has a punitive national anthem law, including Russia, Singapore and Malaysia.

Passage of the national anthem bill could open up the floodgates to further legislative efforts long opposed in Hong Kong, including national security legislation that could significantly increase Beijing’s sway over the territory.