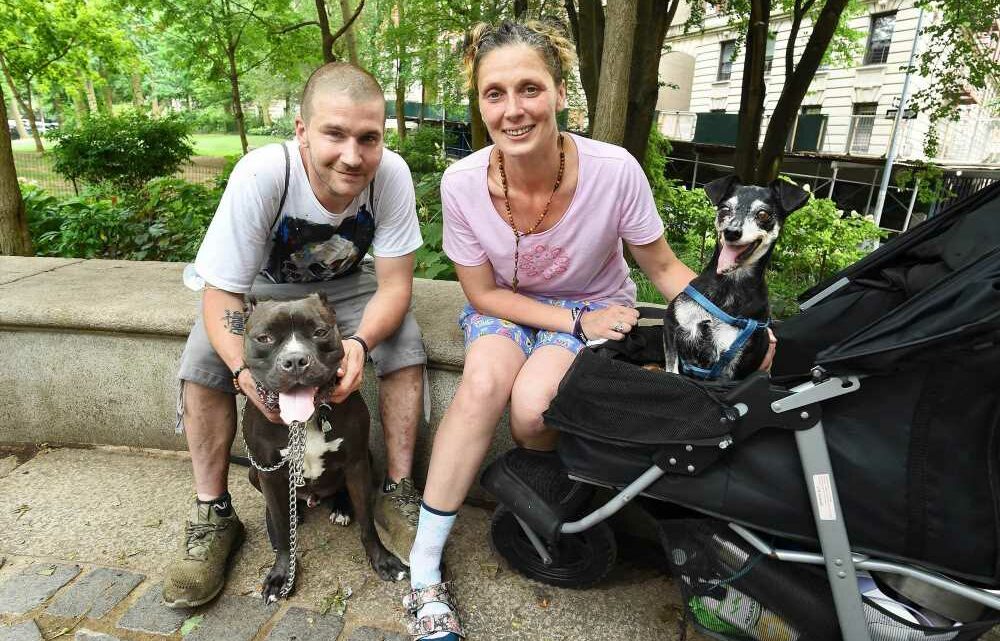 April Saccoccio sat begging for money and dog food near Union Square on a sweltering 95-degree day, holding back tears as her pup Snoopy lapped up water from a bowl.

Snoopy is one of two dogs Saccoccio shares with partner Alex Lively. The pair, and their four-legged friends, spent three years living on the streets of New York.

“They are the only things that keep us going,” said Saccoccio. “We put them first; it’s the dogs first, then it’s me and him.”

Going to shelters was a nonstarter for Saccoccio, 38, and Lively, 34, because most won’t accept pets.

“They wanted us to get rid of our dogs, and separate us into single shelters,” Lively told The Post.

Homeless pet owners have long been waiting for the City Council to pass legislation allowing them to bring their four-legged friends into the nearly 450 shelters around the five boroughs.

The bills would require the city to come up with a plan for pet owners on the street and other citizens seeking shelter to move into places that would accommodate pets, and keep records of each pet owner and pet, according to City Councilman Steve Levine (D-Brooklyn), the head sponsor of the bill.

“We were working on passing it right before COVID-19 started, and that kind of derailed it,” he told The Post.

A 2019 NYU study found that shelters refusing to take pets is one of the leading reasons the homeless stay on the streets. Levin estimated there are between 8,000 and 20,000 homeless pet owners in the city.

That’s the case for Lively and Saccoccio, who met on the streets with their animals and were taking shelter under the FDR bridge near StuyTown in Manhattan when they spoke to The Post last month.

Lively ended up on the streets in 2019, after he was hit by a bus and hurt. The resulting shoulder and neck injuries left him unable to work as a masonry apprentice. Saccoccio was left homeless after fleeing an abusive relationship, she said.

The pair has seen violence while out on the streets, and struggled with the indignity of having to rely on strangers to feed themselves, and their dogs. But giving up the love and protection that Snoopy and Buddy offer them is unthinkable, Saccoccio said.

“I don’t think we would have made it this far if it wasn’t for the dogs,” she said. “They inspire you to keep going, they are always there and are everything we need.”

The situation is especially dire for pet owners trying to escape from domestic violence, who are often reluctant to leave for a shelter due to anti-pet rules, Levin said.

“There’s all types of situations, like where somebody will continue to live with their abuser if they don’t want to give up their pet, especially if the children are attached,” Levin told The Post. “So there’s a real issue in terms of hampering people’s ability to find safe and decent shelter.”

Deedra Cheatham, the director of constituent services for Councilman Levin who has advocated for the homeless pets bill, knows well how important pets can be for survival — and what a roadblock they can be to getting help.

Cheatham was trying to escape an abusive relationship in 2017, and desperate to get herself, her 13-year-old daughter and toddler son into a domestic violence shelter.

But the then-2-year-old couldn’t leave the family’s pet turtle behind, she recalled.

The reptile had been a gift from the boy’s uncle, she recalled, a “safe pet” to which the child had become emotionally attached.

“That turtle helped us through a lot of things,” Cheatham said. “For emotional reasons, there was no way we would have been able to leave our pet behind.”

Cheatham currently works alongside the Urban Resources Institute, and their People and Animals Living Safely (PALS) shelter, which let Cheatham bring her turtle into their pet-friendly shelter facility. It’s one of just seven in the city which accommodate pets.

Cheatham is confident the push to make city shelters pro-pet is gaining momentum.

“We are looking for some support within the City Council,” Cheatham told The Post. “We are trying to introduce it again within the next couple of weeks.”

While service and emotional support animals are already allowed in city shelters, pets without that designation usually get the boot, according to the Coalition for the Homeless organization.

The police broke up Saccoccio and Lively’s encampment June 30. Just a day later, with the help of a DHS case worker, they were able to find transitional housing — and bring Snoopy and Buddy with them, they said.

Meanwhile, they have applied for emotional support status for their dogs, as they wait to see if the law changes.

“We finally have a direction to go,” Lively said, as he let Buddy lick his face. “The wheels are starting to turn for what we have been striving for the past couple of years now.”