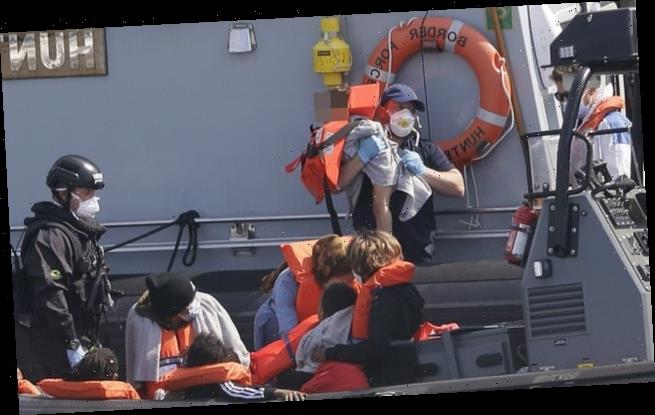 Home Office 'has plan to use five prisons to house migrants'

Home Office has secret plan to use at least five prisons to house migrants who cross the Channel to Britain, whistleblower claims

Officials at the Home Office are drawing up secret plans to use prisons to house the record numbers of migrants crossing the Channel to Britain from France, according to a Government whistleblower.

A Detainee Operations Manager last night claimed to The Mail on Sunday that at least five prisons could be ‘restructured’ to provide short-term accommodation for the tide of migrants being intercepted as they make the treacherous 21-mile journey across one the world’s busiest shipping routes.

As the crisis escalates, officials are understood to have stepped up the use of hotels across the UK to house those arriving – with at least 20 sites now being used.

At least 151 migrants made it to the UK on Saturday, the Home Office has confirmed. Border Force vessels were active in the Channel for most of the day, working with French authorities as well as the coastguard and RNLI. 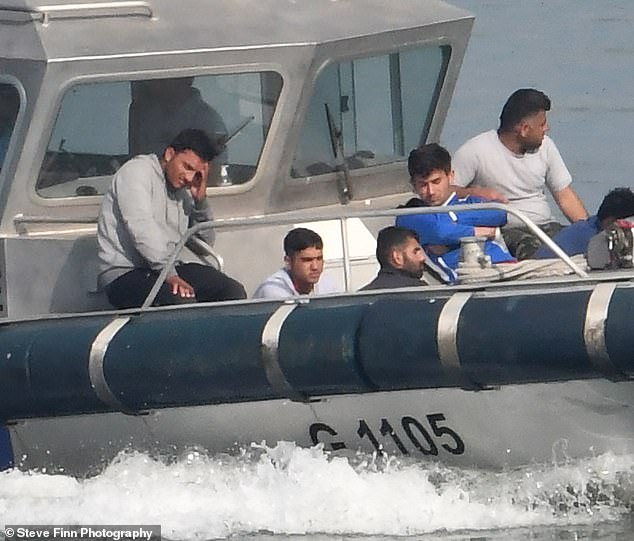 Migrants attempting to cross the Channel in a dinghy yesterday are picked up by French authorities, right, and returned to the port of Calais 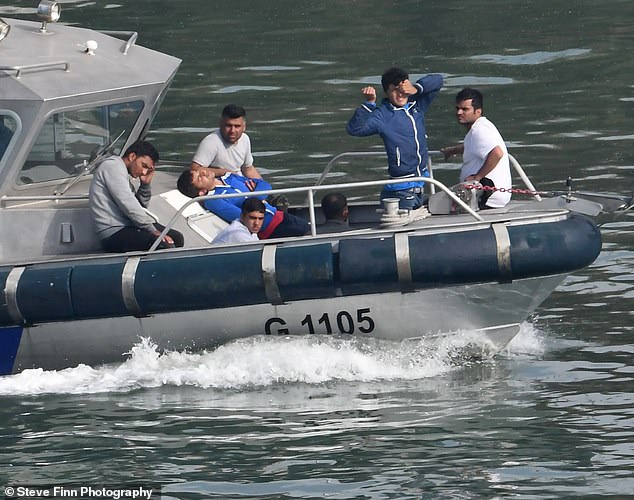 The group of weary migrants attempted to cross the channel by dinghy. They are pictured being escorted back to France

A total of 15 vessels were intercepted by UK authorities. According to official figures, at least 350 people have been intercepted making the crossing from Northern France in recent days, including 235 – the record for one day – on Thursday. But the insider alleged the true number is higher.

The source said: ‘Official figures are significantly different to the information we are seeing on a daily basis. Media reporting appears to be understated and this is a concern. Actual numbers for Wednesday were 322 from Border Force detentions. These were all coastal engagements above the normal detection and removal figures. From the data on my desk in the past 72 hours, that is a true and accurate reflection of the numbers of detainees.

While the figure for detentions in the last seven days is approximately 1,277.’ The Home Office has not released a figure for arrivals on Wednesday but last night said discrepancies may be the result of it not including ‘immigration enforcement activity’ on land, only on sea or close to the shore. 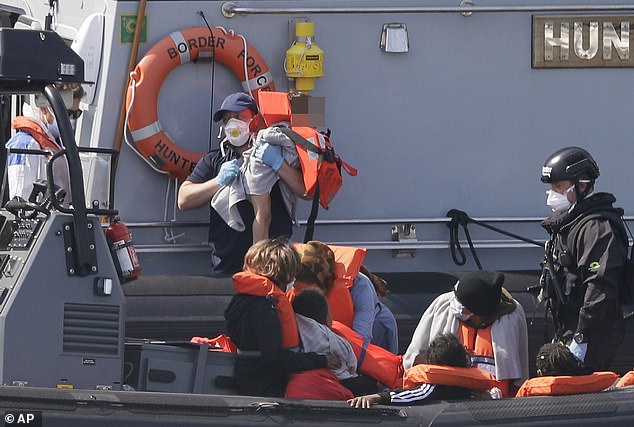 As Home Secretary Priti Patel struggled to retain credibility on the issue of migration, defence chiefs were this weekend considering a request to help deal with the influx. The Ministry of Defence said it would do ‘all it can’ to support the Government but one MoD source described the idea of using the Navy as ‘completely potty’, adding that military resources should not be used to address ‘political failings’.

In a tweet, the Home Secretary insisted she was working to make the ‘dangerous’ Channel crossing route ‘unviable’, but that the Government faces ‘legislative, legal and operational barriers’.

Last night, she announced a new Clandestine Channel Threat Commander to help tackle the crisis. The appointment of Dan O’Mahoney, who is already director of the UK’s Joint Maritime Security Centre, will be ‘vital to cutting this route by bringing together all operational partners in the UK and in France’, she said, although others described the move as a gimmick.

Hours earlier, two more boats carrying a total of 26 migrants arrived on the Kent coast and there were further reported landings at Deal and Folkestone. French border officials from the Gendarmerie Nationale were also photographed intercepting some migrants on dinghies and escorting them back to Calais. The Border Force and the Coastguard are bracing themselves for the arrival of hundreds more migrants this week. An analysis by think-tank MigrationWatch UK predicts 7,500 migrants will have crossed the Channel by the end of the year – more than four times the 1,892 who did so in 2019. Schools Minister Nick Gibb told the BBC that the Government is considering using boats to prevent migrants from making the crossing.

A similar ‘push back’ approach is used in Australia, where military vessels intercept migrant boats and tow them back to Indonesia, but former Labour Home Secretary Jack Straw said the approach ‘requires the co-operation of the French’.

France is reportedly demanding £30 million from Britain to combat the problem, money that the Home Secretary is understood to have refused until she is given assurances on how it will be spent. It is understood the funds would be additional to the £114 million a year that the UK already pays France to help stop illegal immigration.