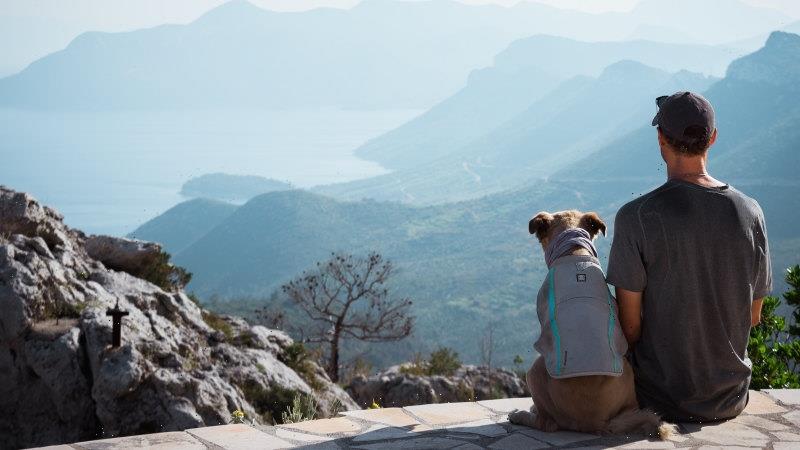 Home at last: Adventurer and his faithful dog complete seven-year trek around the globe

New Jersey: It was a homecoming seven years, 38 countries and 48,000 kilometres in the making.

After circumnavigating the globe on foot, Tom Turcich – who left the US in 2015 and has barely stopped travelling since – finally returned home today with his faithful retriever Savannah by his side.

She is now officially the first dog to have walked around the world, and he’s the 10th man to do so. 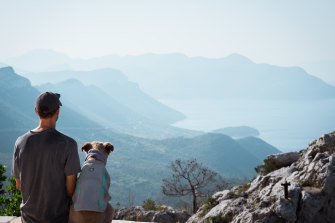 Tom Turcich and his dog Savannah.

The pair crossed the Benjamin Franklin Bridge from Philadelphia into Turcich’s home state of New Jersey shortly after 3pm on Saturday, marking the final leg of an epic journey that has taken them across six continents, from the rugged Andes mountains in South America to the ice-covered landmass of Antarctica. 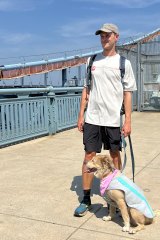 Tom Turcich and Savannah cross the Benjamin Franklin Bridge on the last leg of their seven-year adventure.Credit:Farrah Tomazin

“This moment is pretty surreal,” he tells me, as we walk along the three kilometre bridge, accompanied by about 20 fans who had watched Turcich’s Forrest Gump-like travels on Instagram and wanted to be part of the final stretch.

“After seven years I’m pretty excited to have a roof over my head and to not have to put a tent up or walk for hours each day. It’s been a long time.”

Turcich was one day away from his 26th birthday when he left his family home in Jersey’s Haddon Township to chase a dream born out of tragedy.

The deaths of two of his childhood friends had made him realise that life is fleeting, and that every day should be lived as though it’s your greatest adventure.

“This walk probably wouldn’t have happened without them,” the 33-year-old says. “Their death woke me up to life.”

With Savannah by his side – a rescue pup he picked up at a shelter in Texas after she’d been abandoned on a road – the pair have had the privilege of experiencing the world in all its rawness and richness. 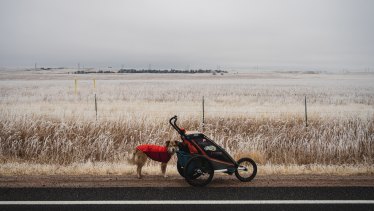 Savannah is now the first dog to have walked around the world.

They’ve trekked through walnut forests in Kyrgyzstan and walked the coastal roads of Turkey where pristine beaches hide on almost every bend.

They’ve climbed the hills of southern Croatia in the searing heat, and navigated the colder weather across the lava rock ridges of Iceland.

And they’ve experienced the kindness of strangers, from the imam at the mosque in Uzbekistan who let Turcich use their electricity to charge his items, to the family in Algeria who gave him a bed to sleep in and helped him find his feet in such a foreign land.

The support of strangers continued in Philadelphia, too, where admirers from across the US gathered at the Benjamin Franklin Bridge this afternoon after Turcich put up an Instagram post inviting people to join him and Savannah as they walk to their homecoming party at his local pub, the Taproom Grill in New Jersey, about two-and-a-half hours away. 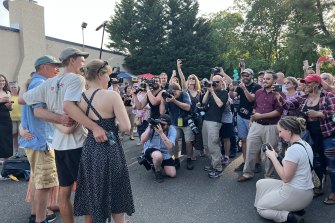 The Turcich family pose for media and friends at Tom & Savannah’s homecoming.Credit:Farrah Tomazin

Among those who heeded the call was 24-year-old Dylan Blecher, who said he’d been “inspired by this guy for four years” and flew from Florida for the occasion.

Also on the walk was Los Angeles resident Jay Matthew, 26, who had equally been moved by Turcich’s worldwide adventure, which had been documented on social media.

“I think it’s a triumph of the human spirit, really,” Matthew says. “Tom’s also a great dude, he’s very humble. And there’s the first dog to walk around the world too – I mean, you’ve got to love a dog who does that, right?”

Shortly after 6pm, Turcich, Savannah and their fellow walkers arrive at the pub, joining hundreds of others who have gathered to welcome their hometown hero: local government officials; family and friends; neighbours and strangers.

The crowd cheer as they spotted the pair in the distance, some running down the street to greet them as they approached, others waiting patiently for Turcich and Savannah to make their formal entrance under a balloon archway and into the beer garden for their homecoming party.

Savannah, wearing a pink bandana around her neck, seemed largely unphased by all the attention as she weaves in and out of the crowd.

Turcich’s parents, Tom and Catherine, are there, too, overjoyed that their son had finally come home, and overwhelmed by the support he’s had along the way.

“It was hard in the beginning,” Catherine says, choking back tears as she reflects on the difficulty of watching her son leave all those years ago, not quite knowing when he was going to return.

“He was so young … and I thought: what’s he getting himself into? But once he got through South America I realised he knew what he was doing, and that’s when I bought into it and embraced it.”

As for Turcich and Savannah, the question many are now asking is: what happens next? After such an incredible adventure, how will they cope with the normalcy of life back home?

Turcich admits that it’s going to take time to adjust, particularly for Savannah, who he adopted as pup “so this is the only life she knows”.

Nonetheless, he’s looking forward to sleeping in, he says, and spending more time with his girlfriend, Bonnie, who he met nine months ago while walking through Washington State. He’s also planning to write a book about his unforgettable journey.

“Whatever happens, I definitely know I’ll be travelling more throughout my life,” he adds. “There’s always something to experience in this world.”