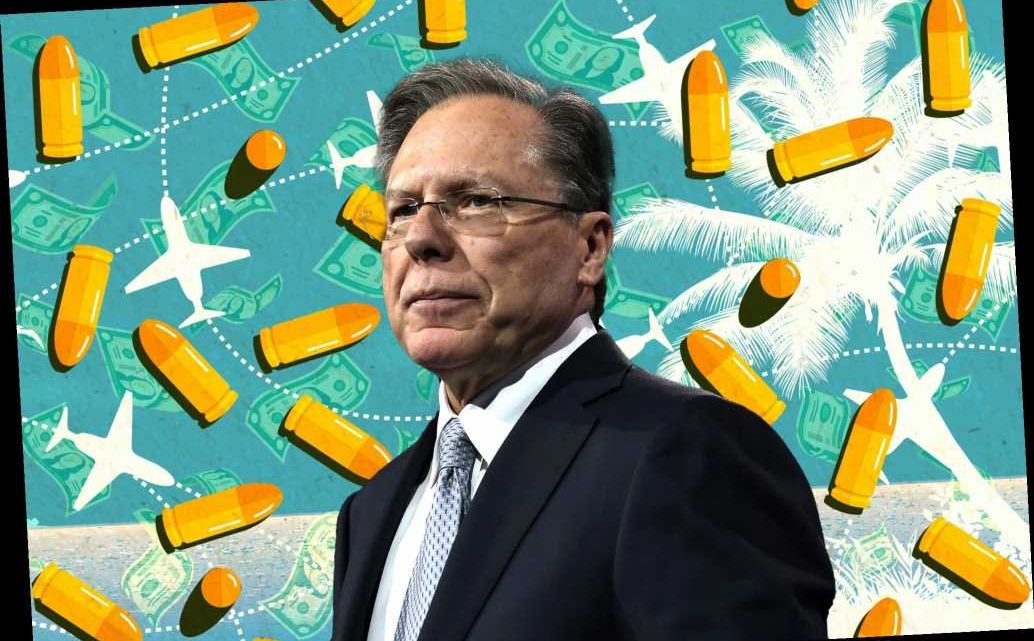 Though they are not charged with any crimes, named in the suit along with the NRA are: Wayne LaPierre, executive vice president; former treasurer and chief financial officer Wilson “Woody” Phillips; former chief of staff and head of general operations Joshua Powell; and corporate secretary and general counsel John Frazer.

The NRA has fired back, claiming in a string of tweets that the suit is politically motivated.

These are just some of the inappropriate expenditures, gifts and other wrongdoing alleged in the suit:

LaPierre, 70, allegedly made at least eight private flights to and from the Bahamas since June 2015, totaling more than $500,000 in costs — all of it billed to the NRA. At least some of the jaunts were for “celebrity retreats,” and LaPierre justified the trips as an investment in relationships with donors to the NRA, according to court filings.

LaPierre was accompanied by his immediate family and, on most trips, the flights stopped off in Nebraska to pick up his niece and her family as well, according to the filings. LaPierre said the trips provided an opportunity for wife, Susan, and his niece to discuss the NRA’s Women’s Leadership Forum, telling investigators, “Any time I get the two of them together anywhere, there is a benefit for the NRA.”

During the Bahamas trips, LaPierre had the use of a 108-foot yacht, named Illusions, courtesy of MMP Principal, a company the NRA has paid over $60 million for fundraising, printing and mailing services since 2014. LaPierre described Illusions as “a big, big yacht” with a crew that includes a chef, according to the filings, which also noted that the vessel has four staterooms, a 16-foot jet boat and two jet skis.

LaPierre said he viewed Illusions as “a safe place to do [business], and [I] didn’t consider it a gift.” He was again joined aboard by both his immediate and extended family.

Through ties to the production team of the “Under Wild Skies” television show — which formerly aired on the now-defunct NRATV — LaPierre and his wife regularly appeared in episodes, receiving comped hunting trips around the globe. The couple participated “in big game hunts in the United States, Botswana, Tanzania, South Africa, Zimbabwe, Mozambique, Argentina, and Uruguay,” according to court filings.

Expenses of the trips, “including professional hunter costs, camps, chartered in-continent travel, food and beverages, hunting licenses, trophy fees, and taxidermy,” were covered by the show. A single hunting trip of that nature could run upwards of $100,000, according to the filing.

Between 2013 and 2017, LaPierre doled out Christmas presents to colleagues, with many staffers receiving an “ice cream gift basket.” But his inner circle received even flashier gifts from Bergdorf Goodman and Neiman Marcus, in one case upwards of $1,500, according to the filings.

But it wasn’t LaPierre playing Santa out of holiday spirit — he was reimbursed for over $6,500 in gifts during the five-year period. The goodies also included birthday, anniversary and baby-shower gifts.

LaPierre hit the links on the NRA’s dime

Between 2009 and 2017, LaPierre expensed over $100,000 in membership fees to a Washington, DC-area golf club, according to the filings. LaPierre told investigators he used the course for both personal and business purposes — but the AG’s Office found no evidence that he substantiated that assertion before getting reimbursed.

CategoryWorld News
Tagsare here? NRA&#8217 of Some the

Meghan Markle and Jennifer Lopez Both Swear By This Denim Brand, and Its Jeans Are Up to 50% Off
World News