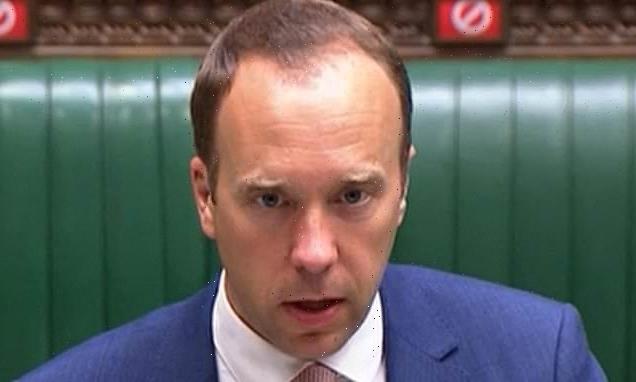 Matt Hancock warned yesterday that rebooting international travel will be ‘challenging’, renewing fears foreign holidays will be off limits this summer.

The Health Secretary said the importation of new variants could derail plans to fully unlock domestically on June 21 and that the ability to do this must ‘be protected at all costs’.

The hardline stance came in the Commons as MPs demanded to know why Portugal was downgraded to amber last week and why more countries weren’t added to the quarantine-free green list. 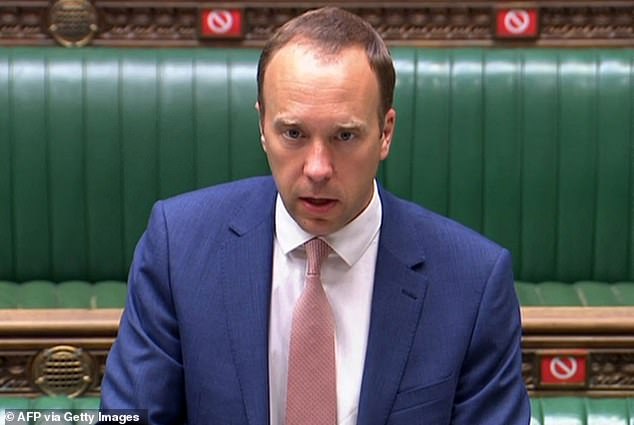 Huw Merriman MP, Tory chairman of the transport committee, asked for a concrete ‘milestone’ for when international travel can be unlocked. But Mr Hancock replied: ‘It is going to be challenging, it’s going to be hard, because of the risk of new variants and new variants popping up in places like Portugal which have an otherwise relatively low case rate.

‘But the biggest challenge, and the reason this is so difficult, is that a variant that undermines the vaccine effort obviously would undermine the return to domestic freedom and that has to be protected at all costs.’

Portugal was downgraded from green on Thursday with ministers citing a near doubling of its infection rate within three weeks and the detection there of the new ‘Nepal’ mutation.

Former transport secretary Chris Grayling demanded to know why Malta was not added to the green list despite the Joint Biosecurity Centre saying it would be safe to do so. JBC data is used by ministers to decide whether countries should be ranked green, amber or red under the Covid traffic light travel system.

But Mr Hancock would only say: ‘There’s a number of balanced cases that are put forward before ministers and we always look at the pros and cons of each one.’

Malta yesterday announced it had recorded no new Covid cases in the latest 24-hour period for the first time since last summer. The Mediterranean island nation has also given 75 per cent of its population at least one dose of vaccine.

It has had just 419 deaths out of a population of more than 440,000 and sequences a high proportion of positive tests for the detection of variants, a key criteria for making the green list.

It came as the cost of flights from Portugal soared yesterday as up to 10,000 UK holidaymakers scrambled back to Britain before Portugal went amber today at 4am, meaning ten-day home quarantine now applies.

At least 64 flights, around double the daily number in recent weeks, were due to land in the UK from Portugal yesterday. Planes were largely full, according to travellers, with remaining seats being sold at inflated prices.

A seat on one Ryanair flight from Faro to Bournemouth was available for £285, nearly 17 times the £17 cost of a similar flight on Wednesday. A seat on one easyJet flight was going for £227, compared with one today for £53.

Tourists also reported difficulties obtaining pre-return tests, which they are required to take 72 hours before travel back to the UK.

Hayley Johansen, 50, said: ‘There were a lot of people struggling to get tests. I spent about four hours on the phone on Thursday and Friday trying to find somewhere.’ 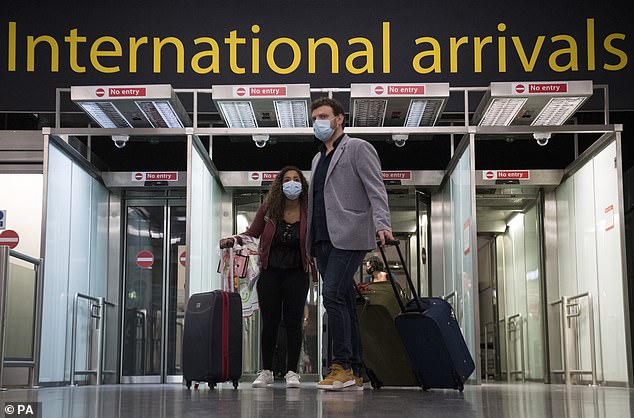 At least 64 flights, around double the daily number in recent weeks, were due to land in the UK from Portugal yesterday

Alan and Lisa Pechey, from Cambridge, told how they paid £800 to fly home yesterday to beat quarantine. They had been due to return from their holiday in Lisbon today.

Speaking at Gatwick airport, Mrs Pechey, 66, said: ‘It was really expensive and I think the Government was totally unfair to throw that at us on Thursday because it really spoiled our holiday, totally.’

Ana Pacheco, 28, from Islington in north London, also landed at Gatwick yesterday and spent around £300 getting home earlier than planned. She said: ‘I think there should have been extra time for us to get home, at least a week would have been better.’

Ministers have come under fire for not first putting Portugal on a ‘watchlist’ to give people more time to return home.

In a joint press conference with US airline bosses, he called on Boris Johnson to use this week’s G7 summit to strike a ‘travel corridor’ with US president Joe Biden to relax measures for vaccinated travellers.

Every woman I know has been harassed in some way, Keira Knightley says
World News