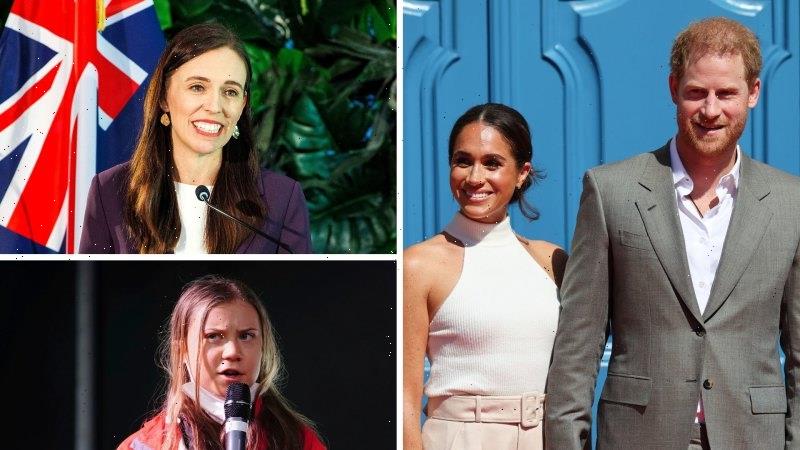 London: Prince Harry and wife, Meghan, have teased a new Netflix series to be aired later this month which praises, among others, the leadership of teenage climate activist Greta Thunberg and New Zealand Prime Minister Jacinda Arden.

Amid the ongoing fallout of their six-part docuseries, which has reopened wounds between Harry and his father, the King and brother William, the Prince of Wales, the Sussexes will present an executive produce a new series on the subscription streaming service called Live to Lead. 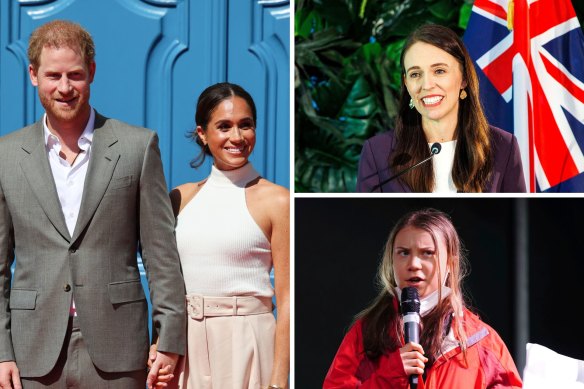 Prince Harry and wife, Meghan, will present a new Netflix series in praise of leaders including Jacinda Ardern and Great ThunbergCredit:Getty, PA

Harry is expected to embark on a mega media blitz to promote his tell-all memoir ahead of its release in the new year, confirming an interview with CNN anchor Anderson Cooper will air on January 8, just two days before the book, Spare, hits the shelves.

The couple both appeared in an almost two-minute long preview clad in black against a white background, for the seven-part series which feature interviews with leaders including Arden, who is one of 14 elected leaders throughout the British realm where the monarch is head of state.

While the royals have long fought for environmental causes, under Harry’s grandmother, the late Queen Elizabeth, they were cautious to align themselves or endorse with partisan political figures.

“This was inspired by Nelson Mandela, who once said ‘What counts in life is not the mere fact that we have lived,’” Harry says. And Meghan adds: “It is what difference we have made to the lives of others that will determine the significance of the life we lead.”

The series is directed by award-winning publisher, author and photographer Geoff Blackwell who said it would honour Mandela’s values by sharing the stories of leaders who distinguish themselves through “moral courage”, “the conviction of their ideals and values”, and the “prioritsation of others”.

The pair, whose self-titled docuseries has drawn tens of millions of viewers worldwide with claims they were bullied out of their royal duties by William and the British press, is now reportedly calling for a summit with key members of the family after the release of their Netflix show.

The Times reported the couple want the institution to take responsibility for the “hurt and damage” they have suffered and want the meeting before attending the King’s coronation in May.

It was reported they are allegedly irate that the palace worked tooth-and-nail for a meeting between Ngozi Fulani, the charity boss who said she was racially abused, and Lady Susan Hussey, a former lady-in-waiting to Queen Elizabeth who was stripped of her role after the racism allegations were levelled at her.

Meanwhile, British broadcaster Jeremy Clarkson said he was “horrified” after “causing so much hurt” in a column he wrote in Rupert Murdoch-owned tabloid, The Sun, about the Duchess of Sussex that sparked outrage at the weekend.

More than 6000 complaints have been made to the press regulator after Clarkson wrote in the newspaper that he “hated [Meghan] on a cellular level”.

In a tweet on Monday, he said: “Oh dear. I’ve rather put my foot in it.” He described a reference he made to a scene in Game of Thrones as “clumsy”.

“I’m horrified to have caused so much hurt and I shall be more careful in future,” he said.

Clarkson’s comments were widely criticised on social media over the weekend. On Sunday, Clarkson’s own daughter Emily said: “I want to make it very clear that I stand against everything my dad wrote about Meghan Markle.”

But The Sun’s editor Victoria Newton dismissed claims of a “conspiracy” against the couple in the Netflix series by Buckingham Palace and the media, saying it did not stack up.

“We had lots of dealings with the press officers at the time for Harry and Meghan and in particular I remember some of my dealings with them going back to when they were still in the family”, she said.

“Never once was I given a negative story about other members of the royal family to look after William and Kate for example,” she said.

“A lot of the time we were given more positive stories about Harry and Meghan from the royal [household] officially. The idea that we were always favouring William and Kate or the other royals over them is just simply not true.”