Delhi: As priests in saffron robes chanted hymns, Indian Prime Minister Narendra Modi sprinkled sacred water and flowers into a small hole, part of a ritual marking the start of construction of a grand Hindu temple.

It was an event for the history books. The ceremony in northern India on Wednesday represents a signal victory for Modi and Hindu nationalists in their quest to transform the nation – a vast, multireligious democracy founded on secular ideals – into a state dominated by the Hindu majority.

For nearly 500 years, a mosque stood at the same spot in the city of Ayodhya. Hindu extremists illegally razed the mosque in 1992, setting off bloody nationwide riots. India's Supreme Court handed control of the site to Hindu groups in 2019 after a protracted legal battle. 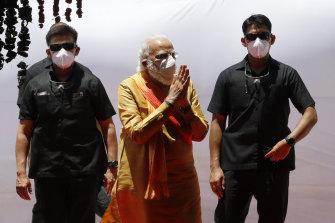 Indian Prime Minister Narendra Modi, centre, arrives for the groundbreaking ceremony of a temple dedicated to the Hindu god Ram, in Ayodhya.Credit:AP

Modi struck a triumphant tone as he presided over the culmination of India's most bitter religious dispute. "The entire country is emotional and overwhelmed," he said. "Today centuries of waiting are over."

The ceremony, broadcast live across the country, was scaled down because of the coronavirus pandemic. Fewer than 200 people were invited to the event, and all of them, including Modi, wore face masks. 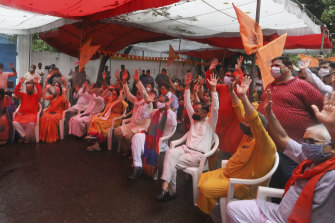 Hindus shout religious slogans as they watch a live telecast on a giant screen the groundbreaking ceremony.Credit:AP

India is grappling with one of the worst coronavirus outbreaks in the world. More than 50,000 new infections and roughly 800 deaths are being reported daily. The World Health Organisation said the country had topped the global charts for new cases and deaths in the previous 24 hours.

With infections rising and the economy struggling, the temple groundbreaking is a welcome diversion for Modi, the most powerful prime minister in almost five decades.

The ceremony underlined how quickly – and dramatically – Modi has moved to put his stamp on this nation of more than 1.3 billion people since winning a landslide reelection victory in May 2019.

Exactly a year ago, he revoked the semi-autonomy granted to Kashmir, India's only Muslim-majority region, breaking with seven decades of Indian policy. In December, his government passed a law that excluded Muslim migrants from a fast track to citizenship. In February, Hindu-Muslim riots erupted in Delhi, the deadliest such violence in the capital since Indian independence.

The Muslim community has viewed these developments with alarm. Although roughly 200 million Muslims live in India, they represent only 14 per cent of the population. They face discrimination in employment and housing and fare poorly on measures of socioeconomic progress. Now many of them fear they are becoming second-class citizens. 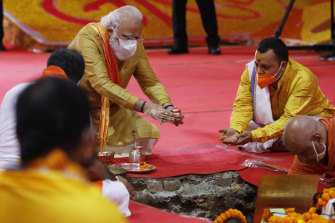 The construction of the temple in Ayodhya is a prime example. For three decades, the campaign to build the temple devoted to Lord Ram, a beloved deity, has been the animating principle of the ruling Bharatiya Janata Party. The issue fused religion and politics in an amalgam that proved both effective and combustible.

Many Hindus revere the site as the spot where Lord Ram was born. For some, the ceremony fulfils a yearning to honour a god worshipped for his heroism and virtue.

But the push to build the temple is not a simple act of religious devotion. Hindu nationalists view much of recent Indian history as a series of humiliations – centuries of rule by Muslim kings and the British Empire – that must be rectified.

They believe a Hindu temple originally stood at the site in Ayodhya and was later torn down by Muslim rulers. The subsequent destruction of the mosque and the ultimate construction of the temple are viewed as the remedy to years of subjugation.

The Ram temple is a "symbol of nationalism," said Dattatreya Hosabale, a senior Hindu nationalist ideologue, at an event in Delhi in July. "It was meant for regaining the self, which was damaged by foreign aggressors."

Hindu nationalism is a majoritarian ideology that seeks to create a state "where minorities have to give up their separate identity and pay allegiance to the dominant culture," said Christophe Jaffrelot, a political scientist at the Paris Institute of Political Studies, known as Sciences Po. The construction of the Ram temple is "one more blow" to India's secular foundations, but there will be others, said Jaffrelot, who studies the Hindu nationalist movement.

The temple will be built of red sandstone and rise to 49 metres at its highest point. Construction is expected to be completed in 2023, the year before India's next national elections. In the meantime, there are plans to transform Ayodhya – a small city on the Sarayu river – with a new railway station, a new airport and a towering statue of Lord Ram. Ahead of Wednesday's ceremony, the streets leading to the temple got a fresh coat of bright yellow paint and were festooned with saffron-coloured flags.

"History is being made here," said Mahant Paramhans Das, a senior Hindu priest in Ayodhya who once threatened to set himself on fire if the temple was not built. "It is a great moment for all of us because now Lord Ram will have his permanent home."

It is is being built at the site of the former Babri mosque, which was completed in the 16th century. The legal tussle over whether Hindus or Muslims should control the site began 70 years ago. But it did not emerge as a national flash point until the late 1980s when the Bharatiya Janata Party, or BJP, made the construction of the temple its signature issue and organised processions to Ayodhya, where party leaders rallied supporters to their cause.

After one such rally in 1992, a mob using axes, hammers and their bare hands razed the mosque. The demolition sparked riots across the country that are estimated to have killed 2000 people. The temple project was also at the root of deadly riots in Gujarat in 2002 that left more than 1000 people dead, mostly Muslims.

"The divide between Hindus and Muslims grew with the Ram temple movement," said Anand Patwardhan, a filmmaker who made a documentary on the dispute in 1992. "Today, with a subservient legal system, the BJP has hijacked both secularism and democracy."

AG Noorani, a lawyer and constitutional expert who wrote a book on the Ram temple dispute, said the groundbreaking left him dejected. "I feel saddened and depressed," he said. "This is no longer the same India. Narendra Modi has seen to it that it becomes a Hindu India."