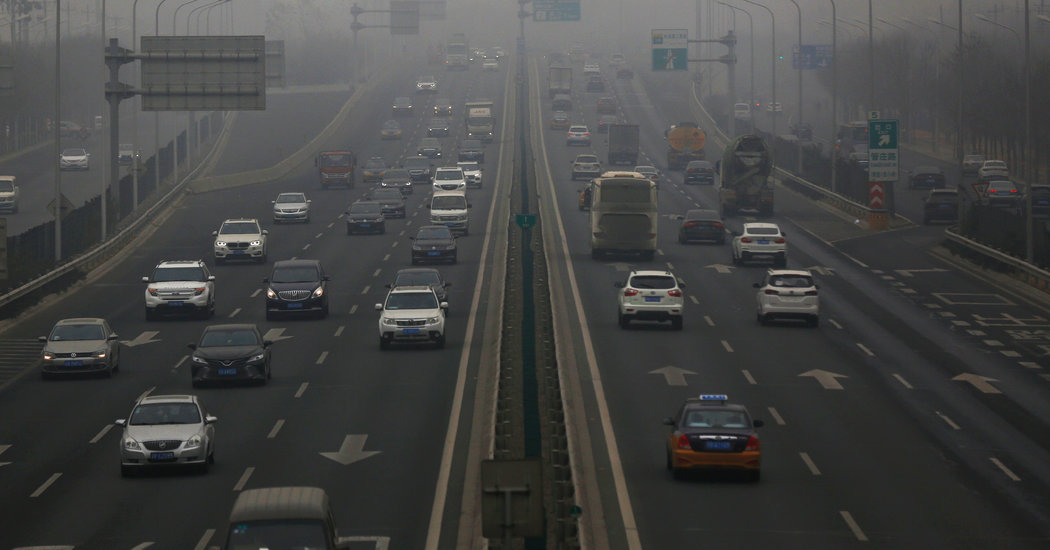 Greenhouse Gas Emissions Rise Like a ‘Speeding Freight Train’ in 2018

Want climate news in your inbox? Sign up here for Climate Fwd:, our email newsletter.

The world’s greenhouse gas emissions are rising at a faster pace in 2018 than they did last year, researchers said Wednesday, the latest evidence that planet-warming pollution is proliferating again after a three-year lull in the middle of the decade. That trend is accelerating the earth’s collision course with some of the most severe consequences of climate change, scientists warned.

Worldwide, carbon emissions are expected to increase by 2.7 percent in 2018, according to studies published in three respected scientific journals by the Global Carbon Project. Emissions rose 1.6 percent last year, the researchers said.

In an accompanying commentary in the journal Nature, scientists said the increases put the world on track with the highest emissions trajectory modeled by the Intergovernmental Panel on Climate Change, a United Nations scientific group. That group issued an alarming report in October that warned that, if emissions continued to rise at the current rate, the planet would warm 2.7 degrees Fahrenheit (1.5 degrees Celsius) above preindustrial levels by 2040, opening the door to widespread food shortages, wildfires, coastal flooding and population displacement.

But the recent rise in global emissions, together with other factors, including natural variability, could accelerate the timeline, thrusting the earth above that threshold of warming by 2030, the scientists said. They compared the emissions increases to a “speeding freight train.”

Led in large part by China, the United States and India, the world will release a record 37.1 gigatons of planet-warming emissions in 2018, according to the researchers’ preliminary analysis and economic projections. That is roughly 100,000 times the weight of the Empire State Building.

Even as coal has fallen out of favor in some markets, the rise in emissions has been driven primarily by stronger demand for natural gas and oil, scientists said. And even as renewable energy generation has expanded exponentially, it has not been enough to offset the increased use of fossil fuels.

“We’ve seen oil use go up five years in a row,” said Rob Jackson, a professor of earth system science and an author of one of the studies. “That’s really surprising.”

“We thought oil use had peaked in the U.S. and Europe 15 years ago,” he said. “The cheap gasoline prices, bigger cars and people driving more miles are boosting oil use at rates that none of us expected.”

In the United States, the world’s second-largest emitter of heat-trapping gases, the Trump administration has moved to roll back regulations designed to limit emissions from vehicle tailpipes and power-plant smokestacks.

And promising technological advances have sometimes been offset by market forces, Dr. Jackson said: “There are dozens of models of electric cars slated to come out in the next five years, so that’s great news. And on the other hand, in the U.S. we have most of the major car manufacturers saying they’re going to get out of the sedan business and build S.U.V.s and trucks.”

The world’s largest emitter is still China, which produces 27 percent of global carbon emissions, according to the report. The United States accounts for 15 percent of emissions, the European Union 10 percent and India 7 percent.

China’s emissions are projected to rise 4.7 percent in 2018, the report said. The country is stimulating manufacturing to counterbalance its slowing economy, allowing more coal-based manufacturing that it had avoided in the past, Dr. Jackson said.

United States emissions are expected to rise 2.5 percent this year after several years of declines, and despite a shift away from coal toward cleaner sources of energy. Dr. Jackson attributed part of the increase to a colder-than-normal winter in some parts of the country and a hotter summer in other parts, which inflated demand for heating and cooling.

In India, a projected emissions increase of 6.3 percent is linked to the country’s effort to provide electricity to 300 million people who currently lack it.

The earth has already warmed 1.8 degrees Fahrenheit (one degree Celsius) above preindustrial levels. In the United States, the effects of that warming could be seen this year across the country, from the wildfires that raged in California to the hurricanes that buffeted the Southeast. Although researchers cannot say that the warming climate caused the individual weather events, they can say that it created conditions that increased the likelihood of the events.

The new studies were issued as delegates from nearly 200 countries were gathering in Poland to debate their next steps under the Paris climate agreement. But the increasing global emissions are putting the goals of the Paris accord — to limit warming to well below two degrees Celsius — further out of reach, the researchers warned.

“There are some glimmers of hope in this, but it’s not good news,” Dr. Jackson said. But he said there were still reasons for optimism. “Coal use has dropped 40 percent in the United States, replaced by natural gas and renewables. That’s saving lives as well as helping the climate problem.”

Kendra Pierre-Louis is a reporter on the climate team. Before joining The Times in 2017, she covered science and the environment for Popular Science. @kendrawrites

More than 200 Manitobans busted for distracted driving in November

Who plays Laurie Lake on Riverdale? Guest star Riley Keough is someone you should know
World News