Grandmother, 91, who became the first person in the world to get an approved Covid vaccine gets her booster dose and urges un-jabbed public to ‘go for it’

A British grandmother who became the first person in the world to get a Covid vaccine outside of a clinical trial today received a booster jab, as the UK continues rolling out top-up doses.

Margaret Keenan, 91, who likes to be called Maggie, returned to University Hospital Coventry in Warwickshire this afternoon to get her third coronavirus injection.

The grandmother-of-four made history on December 8 when she became the first person to get an approved Covid jab.

And May Parsons, a nurse at the hospital who administered Ms Keenan’s first and second jab, received her third injection alongside her.

The drive, a bid to boost their protection and avoid a fourth wave this winter that overwhelms the NHS, is already underway.

Ms Keenan, a former jewellery shop assistant who only retired five years ago, said she was ‘so happy’ to receive a booster and urged others to come forward for the jab.

She said: ‘I don’t really know what stops people from having it, maybe they are frightened of the needle, but it is nothing to be frightened of.’

Since the rollout began, 48.6million first doses and 44.6million second doses have been administered, equating to more than eight in 10 over-16s in the UK being fully immunised.

Health Secretary Sajid Javid confirmed last week that 32million people in the UK would be offered third doses six months after their second.

Older care home residents, over-50s, health and social care workers and over-16s with underlying conditions that puts them at severe risk from Covid are all eligible for the extra injection. 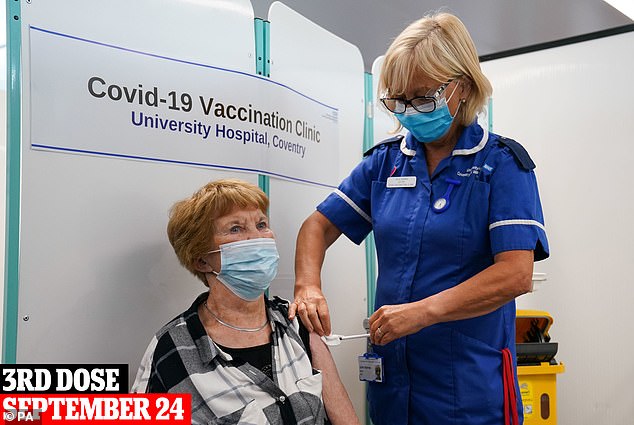 Margaret Keenan, from Coventry, received her third dose of the Pfizer vaccine today at University Hospital Coventry in Warwickshire. Last December, she became the first person in the world to receive a coronavirus vaccine outside of a clinical trials 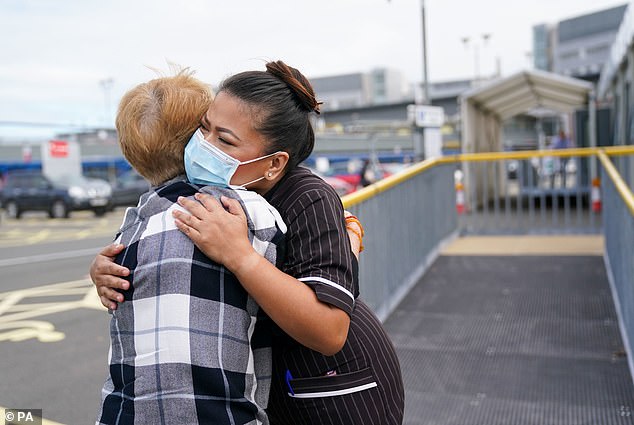 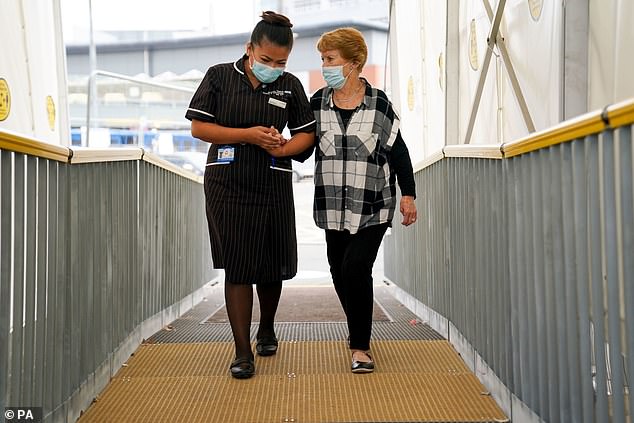 Matron Parsons (pictured left, speaking to Ms Keenan) said it is ‘really extremely heart-warming’ to see Ms Keenan ‘doing so well’ and it is ‘imperative’ to get a third dose of the Covid vaccine ‘if you want maximum protection this winter’ 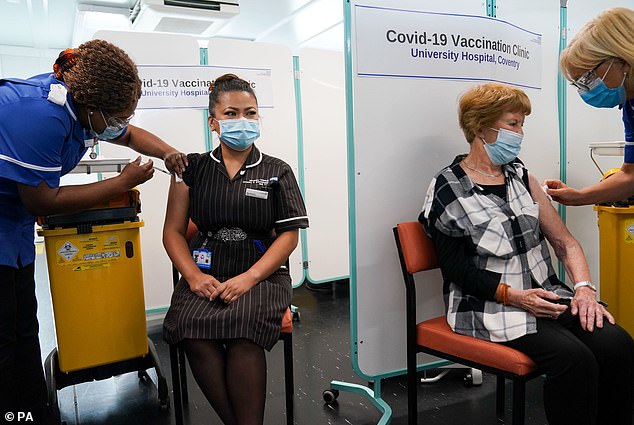 Ms Keenan and Ms Parsons received their boosters side by side at the same time, which the grandmother said was ‘hilarious’

Ms Keenan said: ‘It was a real privilege to be the first person vaccinated against Covid in December, and to be able to receive my booster alongside May was hilarious.

England’s Covid outbreak shrunk by more than a tenth last week and the R rate dropped below one, according to official data — but infections are now rising among children in another sign of a back-to-school wave.

The Office for National Statistics’ weekly surveillance report estimated 620,100 people had the virus on any given day in the week to September 18, down 11 per cent from the previous seven-day spell.

And No10’s top scientists claimed the R rate has dipped below one for the first time since mid-August and could be as low as 0.8.

But the ONS also estimated cases ticked up among 12 to 16-year-olds and 2 to 11-year-olds, with up to one in 35 thought to be infected. Cases fell in all other age groups.

The latest statistics add to a growing body of evidence that infections are now rising among children after they returned to classrooms in England, Wales and Northern Ireland at the start of September. Experts had warned the start of the autumn term would spark a fresh wave.

‘May is great fun – we have done the double-act today, Maggie May.

‘It has protected me in my mind as well, and I feel quite confident now going out to places, I feel so happy now that I have got this done.

‘It’s saving their lives, their family’s lives, and it is helping the NHS, so what more can I say – go for it, go and have it done, you will feel much better for it, it is going to help you, and help others.’

The third doses are being administered through pharmacies, hospitals, GP practices and vaccination centres.

People will be given a booster dose of Pfizer or half a dose of Moderna, regardless of which vaccine they received for their first two doses.

But if they are allergic to either of those vaccines, AstraZeneca’s jab will be used.

The national vaccination drive, which was launched at 70 UK hospitals last December, saw most of the first doses given to the over-80s.

The UK was the first country in the world to use the Pfizer jab after the Medicines and Healthcare Products Regulatory Agency (MHRA) approved its use on December 2.

The AstraZeneca jab was the second to be rolled out across the UK after it was found to be safe and effective by the MHRA on December 30.

Moderna’s jab was the third to be approved, receiving the medicine regulator’s approval on January 8.

Some 5,000 people were vaccinated on the first day of the rollout in December, but the figure soared to around 845,000 jabs given on a single day in March.

Speaking today, Matron Parsons said it is ‘really extremely heart-warming’ to see Ms Keenan ‘doing so well’ and it is ‘imperative’ to get a third dose of the Covid vaccine ‘if you want maximum protection this winter’. 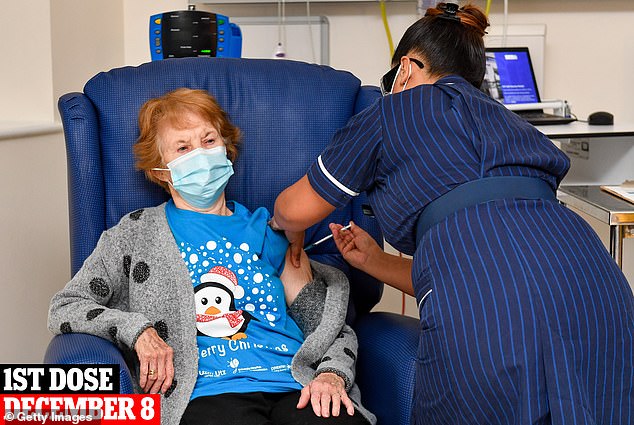 On December 8, days before her 90th birthday, Ms Keenan became the first person to receive the Pfizer jab once they had been approved in the UK. Speaking at the time, she hailed it as a ‘massive day’ for her and for ‘the rest of the world’ and said she was ‘so pleased’ to be able to return home and spend time with her family 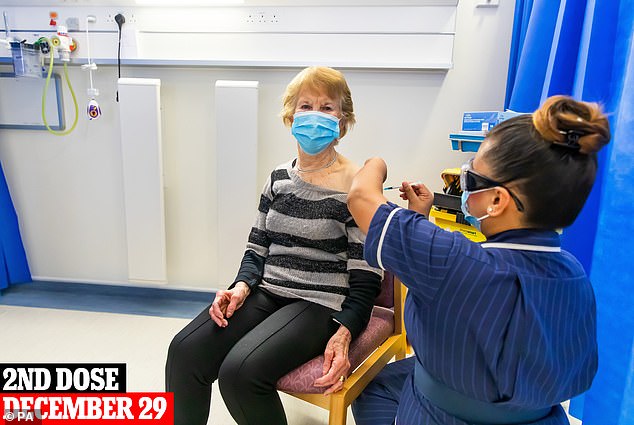 After kicking of the UK’s biggest-ever vaccination drive, Ms Keenan received her second dose on December 29

She added: ‘Even if people are not doing it for themselves and are healthy and well, they are doing it for other people that are quite vulnerable. 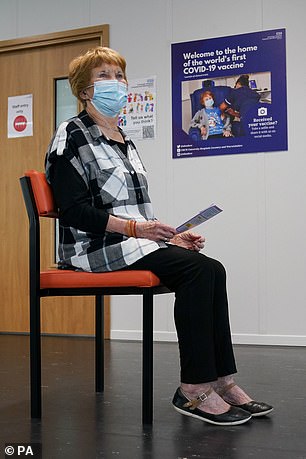 Ms Keenan said the booster jabs are saving lives and helping the NHS. ‘What more can I say – go for it, go and have it done, you will feel much better for it, it is going to help you, and help others,’ she added

‘It is a community responsibility – I cannot say it loudly enough, get vaccinated and get protected.’

Amanda Pritchard, NHS chief executive, said: ‘The world watched in December as Maggie Keenan became the first in the world to get a Covid vaccine and since then, more than 40million others across the country have joined her.

‘This is testament to the incredible efforts of NHS staff and volunteers, working at speed to protect people from this awful virus.

‘It is wonderful to see Maggie get her top up jab today, protecting herself and those around her ahead of winter.

‘With more than 350,000 people already booked in for their top-up jab, it is great to see so much enthusiasm for the booster vaccine in such a short period of time.

‘If you’re invited, please do come forward for your boost of protection.’

The 15 Best Face Moisturizers for Various Skin Types, According to a Dermatologist and a Cosmetic Scientist
World News