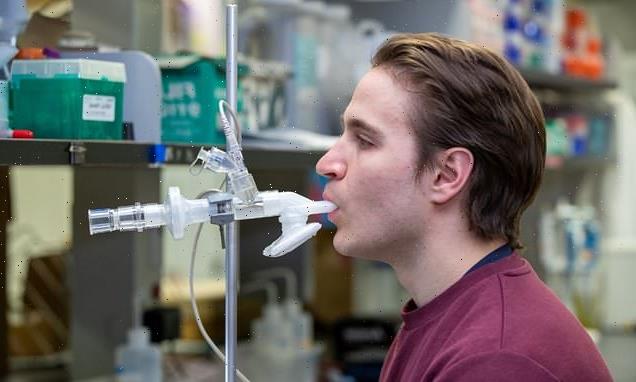 Good news if you hate injections…

Getting a Covid jab could soon become a thing of the past, with researchers one step closer to an ‘inhalable’ vaccine.

Penn State University scientists have already tested it on mice and said the results were ‘encouraging’.

Rodents given two doses of the so-called ‘aerogel’ had more antibodies in their lungs, nose and throat than ones given a fake vaccine.

The researchers hope the targeted antibody response approach will be able to neutralise Covid at the point of infection.

They hope the new technology — which could also be used against the flu — will have the power to prevent infections.

This is because it goes straight into the lungs unlike the current Covid jabs, which are weak at stopping transmission. 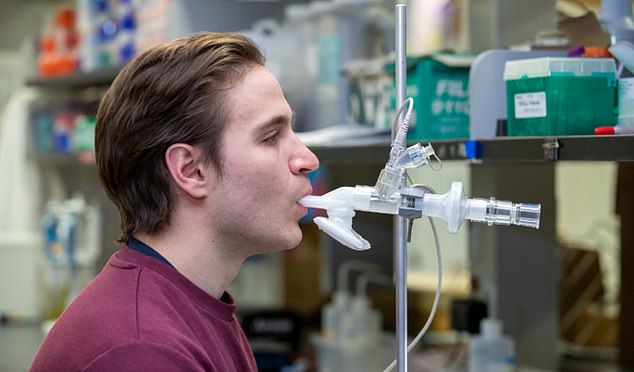 Today’s paper brings scientists one step closer to getting an inhalable Covid vaccine. Penn State University scientists said results from tests in mice were ‘encouraging’. Pictured above is trials of a separate breathable vaccine being developed at McMaster University, Canada 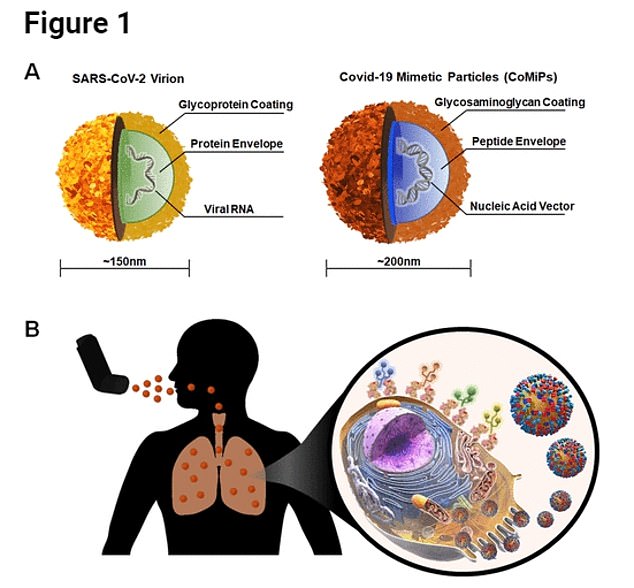 Scientists at Penn State University said their vaccine (top right) was intended to be sprayed up the nose. It would then be absorbed by immune cells lining the airways, they said. Once done it would trigger them to start building Covid spike proteins, leading to an immune response

Research suggests 10 per cent of unvaccinated people haven’t got a jab because of a fear of needles, known as trypanophobia.

As well as inhalables, vaccinologists have also looked at putting the technology into digestive pills.

Trials of the vaccine would need to be conducted on humans before it would ever be rolled out, meaning the jab could be years away from deployment.

Trypanophobia is an extreme fear of needles.

While many people don’t look forward to medical tests or treatments involving syringes or injections, trypanophobia suffers have such an extreme fear it can lead to them avoiding medical procedures entirely.

It can lead to people refusing to get vaccines, or having a panic attack, or even fainting, at the prospect of a blood test.

How many people in the UK suffer from trypanophobia?

The true number of people with the phobia is unknown but charity Anxiety UK estimates that between 3.5 to 10 per cent of the population has some form of trypanophobia.

What causes the fear?

Childhood experiences with vaccines, or seeing a partner, parent or grandparent go through medical tests are thought to be behind the phobia.

What can I do if I’m scared of needles?

Firstly, you should let healthcare professionals know as there are a variety of things they can do to help you feel more comfortable.

There are also a number of techniques such as breathing exercises and cognitive behavioural therapy that can help people deal with their phobia.

Once they swallow the vaccine, they start making spike proteins from the virus.

This is detected by the immune system, allowing it to recognise the pathogen in the future.

The inhalable vaccine contains tiny pieces of genetic instruction which are delivered to the respiratory cells and teach them how to recognise Covid.

Results of the spray in mice, who were given two doses squirted up their nose two weeks apart, were in the journal Biomacromolecules.

Antibody levels in the blood were measured at 14 and 28 days after the first dose was administered, and in the lung fluids a month after the initial jab.

Dr Scott Medina, senior author on the study, said: ‘We saw an increase in antibodies in the lung that may provide some protection.

‘But it was not to the extent that we would like.

‘It’s encouraging data, but there is more optimisation to be done.’

Fellow researcher Atip Lawanprasert said: ‘There are many potential advantages of an inhalable formulation compared to an injectable vaccine.

‘One is avoidance of needles. Inhalable vaccines might be able to help increase the rate of vaccination because so many people are afraid of injections.

‘No matter how high the efficacy of a vaccine, if people do not get it, then it is not useful.’

Dr Girish Kirimanjeswara, also involved with the study, added: ‘The current vaccines are not very good at preventing transmission.

‘They allow the (SARS-CoV-2) virus to replicate in the body, even for a short period, and then transmit to other individuals.’

Several inhalable Covid jabs are already in development including one by McMaster University, Canada, which is in Phase 1 human trials.

A separate spray developed at Queen Mary University of London was found to be 63 per cent effective at blocking infections when tested on 700 healthcare workers in India during the country’s Delta wave.

The AstraZeneca Covid jab is also being tested in liquid form on 42 people in the UK, to see if it could work without an injection.

Every year, the NHS rolls out an inhalable vaccine for the flu to children aged two to 11 years old.

It is sprayed up both nostrils, with under-9s offered two doses. Doctors say it offers the age group the ‘best protection’ possible against the virus.