‘Go home Gota, thank you Cricket Australia’: Tourists bring some joy to a nation in crisis

Galle, Sri Lanka: Alongside the many “Go home Gota” placards directed at Sri Lanka’s president atop the Galle fort on day two of the second Test, another sign of an altogether different tone was shown for the Australian men’s team: “Thank you Cricket Australia.”

Across the six weeks of a tour that some players had questioned the ethics of making before they departed, there has been a coexistence between the economic crisis and universal support for the visiting team. 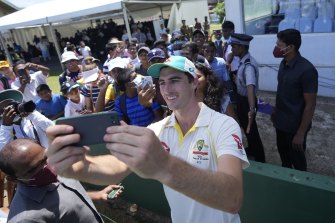 Yes, the tour has used up enormous resources at a time when many of them, especially fuel and electricity, are in horrendously short supply. But the playing of cricket, including a white ball series won by the hosts in front of packed crowds in Kandy and Colombo, has been a rare source of national unity in a time of crisis.

Australian cricketers can be an insular lot: many have toured South Asia over the years and scarcely ventured out of their hotel rooms when not actually playing cricket. While this group has been corralled somewhat by security and COVID-19 protocols, their collective attitude has been much more outward focused.

That’s not by accident. Earlier this year, CA recommitted to fulfilling international touring obligations, even when times were difficult. Both this year’s consecutive tours of Pakistan and Sri Lanka may well have been postponed under previous administrations.

A seasoned team, with many touring experiences behind them, has been far more willing to travel. They have been aided too, by comprehensive briefings on security and other risks from Australian consular authorities, DFAT and the other cricket boards.

“I am really impressed with the calmness of the group and how they have embraced the opportunities and life experiences,” CA’s chief executive Nick Hockley said.

It helps that the men’s Test captain, Pat Cummins, is naturally curious and altruistic in his nature, to the extent that he’s a UNICEF ambassador.

“We’re so lucky to come here and experience Sri Lanka pretty normally,” he said on the eve of the first Test. “We’re certainly seeing the effects, even in the buses seeing the queues kilometres long around petrol stations, so that’s really hit home for us. No matter what the result is, we’re in a really privileged position. There’s a lot of people making this happen for us to play a bit of cricket.”

Throughout the trip, players and their families have often dined out in local restaurants on non-match days. They’ve been seen surfing, shopping, sightseeing and supporting local businesses. All the while, the squad has been touched by the warmth of their reception.

While protesters circled Galle International Stadium on Saturday before taking their perch on the fort ramparts, the Australians had one of the tougher days of their tour, as Sri Lanka’s cricketers put up a greater fight than in the first Test.

Whatever the outcome of the final match, the tourists will depart with memories of a Test series played at the fringes of history, and a sense of how much Sri Lanka loves cricket, even at the worst of times.

“It’s an incredible country and we are very grateful to be here,” Cummins said on Sunday. “We hope they can find a way forward quickly so that Sri Lanka can return to its best as soon as possible.”

All prize money from the trip has been donated to the Sri Lankan people. When this match ends, the team’s playing shirts and much of their cricket gear will be donated to schools and clubs.

10 Stars Who Decided Retirement Wasn't For Them