Home » World News » Girl, 5, asks for toy ducks and a stocking for her cat in heartwarming letter to Father Christmas written in perfect handwriting 120 years ago 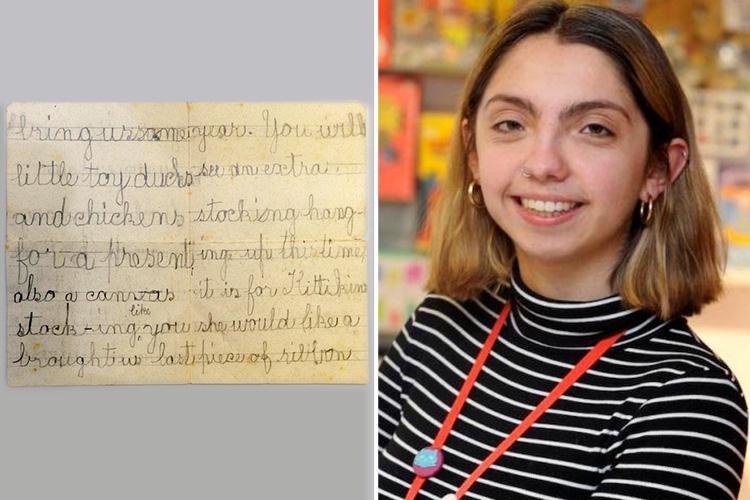 Girl, 5, asks for toy ducks and a stocking for her cat in heartwarming letter to Father Christmas written in perfect handwriting 120 years ago 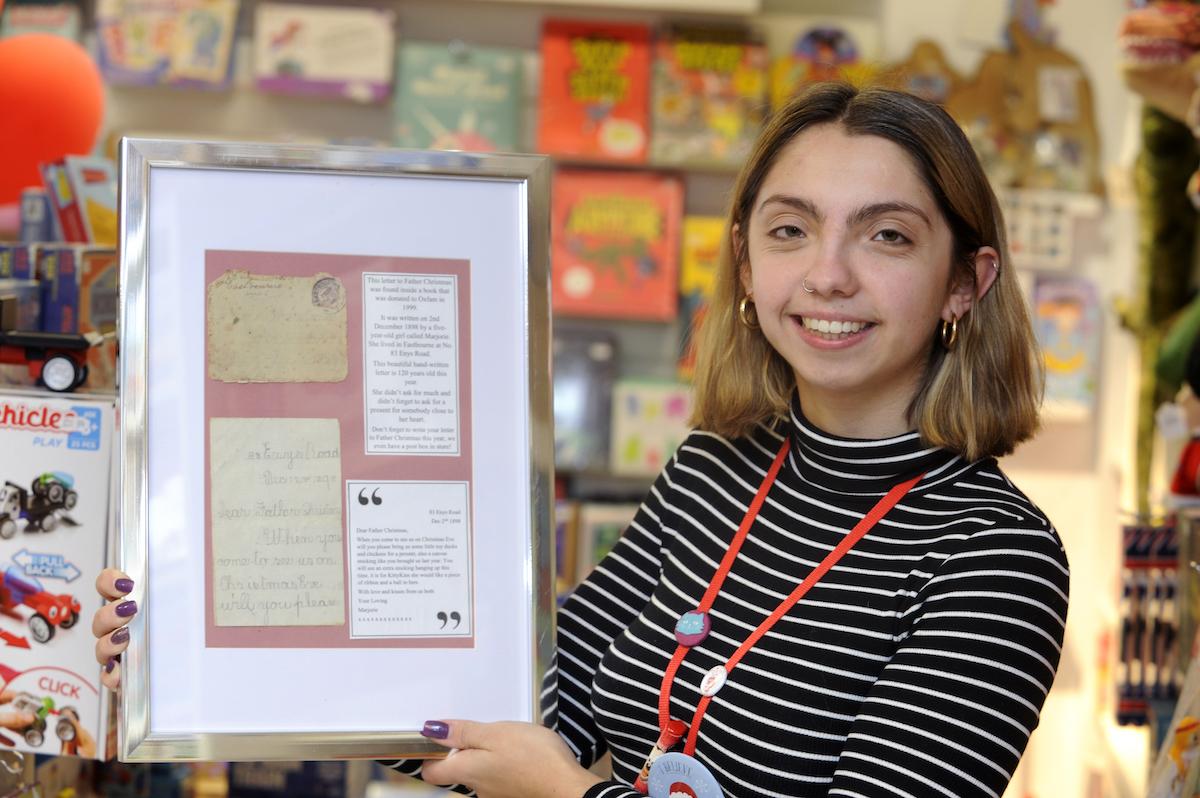 The faded letter, hidden in a book donated to an Oxfam store, is a heart-warming insight into what presents kids wanted at the time.

Marjorie, the well-off daughter of a cotton trader, marked out lines with her pencil and wrote in near-perfect joined-up handwriting, addressing it simply to ‘Father Christmas, North Pole’.

She writes: “Dear Father Christmas. When you come to see us on Christmas Eve will you please bring us some little toy ducks and chickens for a present, also a canvas stocking like you bought us last year.

“You will see an extra stocking hanging up this time, it is for Kittikins she would like a piece of ribbon and a ball in hers. With love and kisses from us both. Your loving Marjorie.” 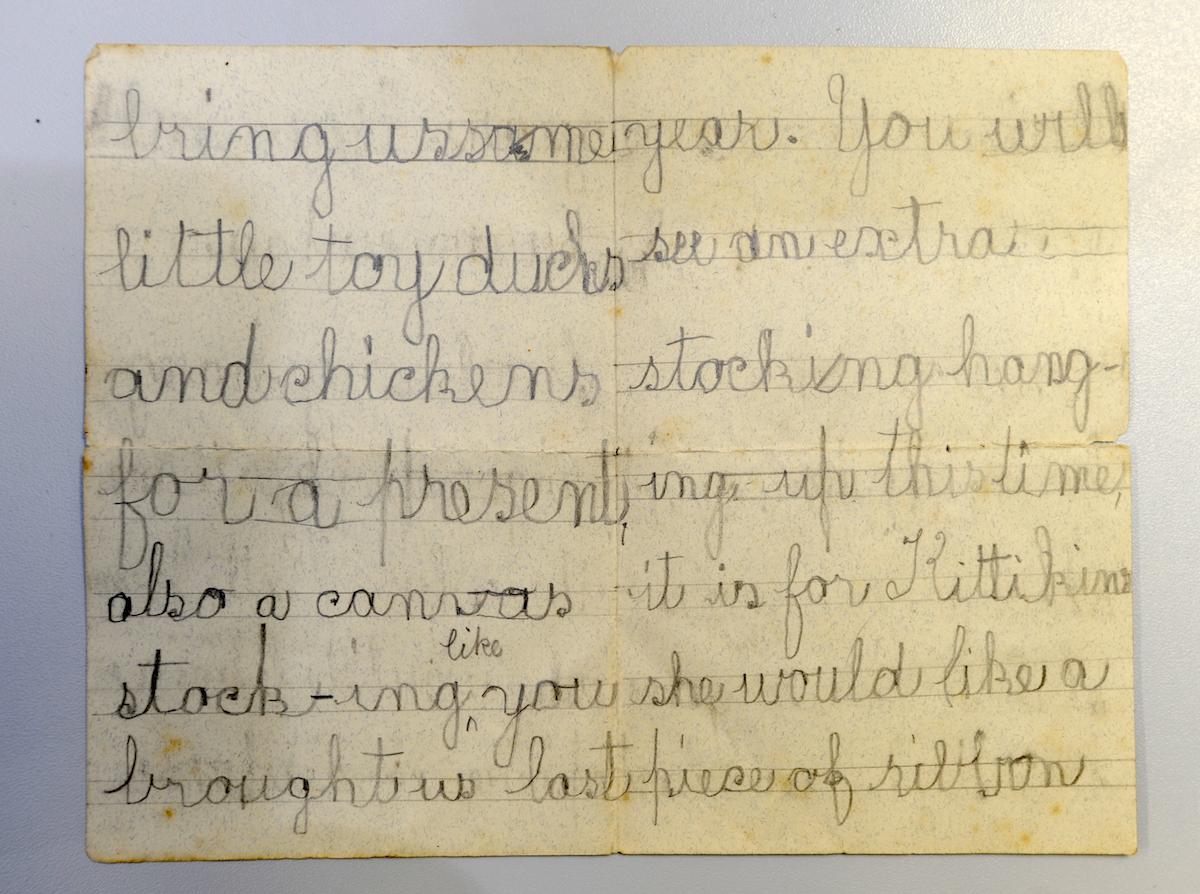 The letter was discovered carefully placed inside an old book that was donated to a branch of Oxfam in Deal, Kent.

Lily Birchall, 19, who now works for Whirligig Toys in nearby Canterbury, was handed the ageing letter by her father Matthew, 54, who used to work in the charity shop.

When she saw it she thought it was so lovely she decided to base the toy store’s annual Christmas window display on it.

Lily, from Deal, said: “When I saw the letter I thought it was really, really special. 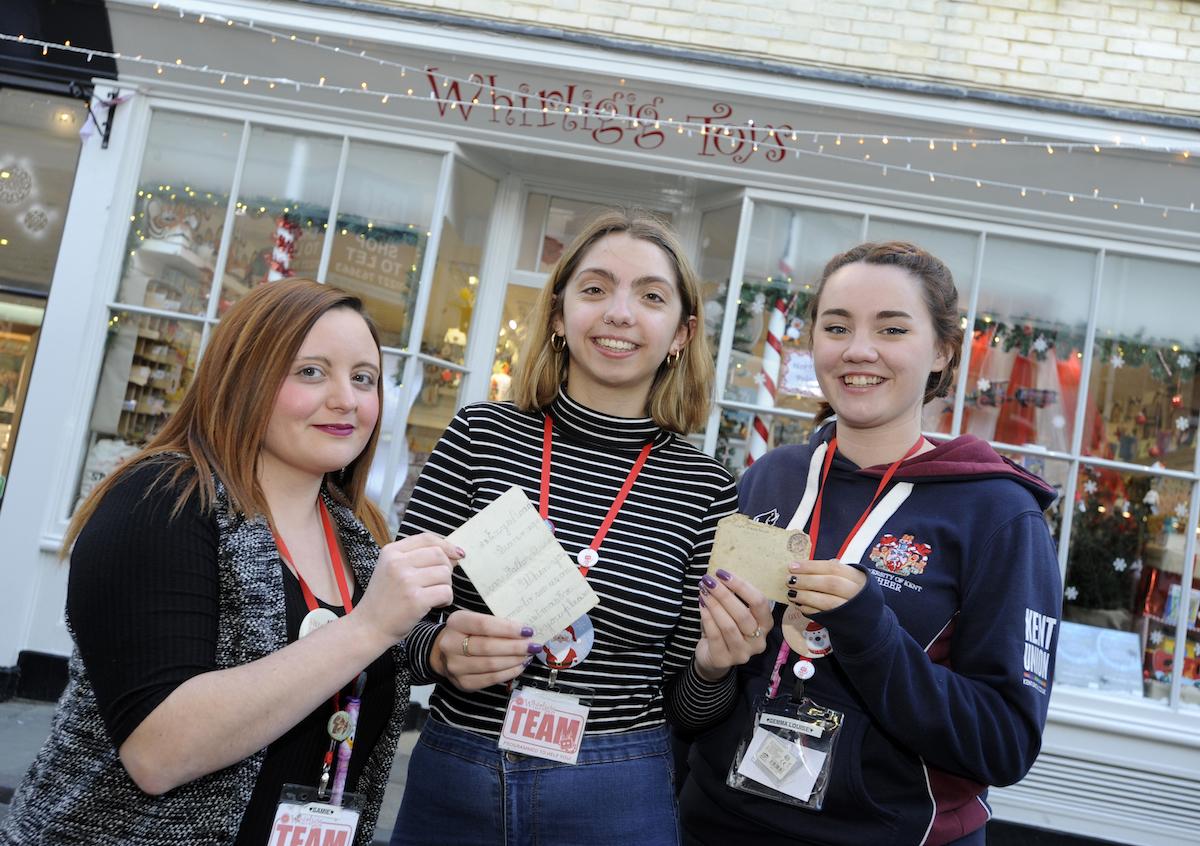 “It’s just the mystery of it – who was this little girl and what happened to her? The writing and the message are beautiful.

Fellow staff member Gemma Gale, 36, added: “You couldn’t fail to be moved by it.

“It’s such a sweet, innocent letter. People have been visiting the window just to see it.”

Marjorie – whose middle name was Wilhemina – was born in October 1893 at Hindley Lodge in Hindley, near Wigan, Lancs. 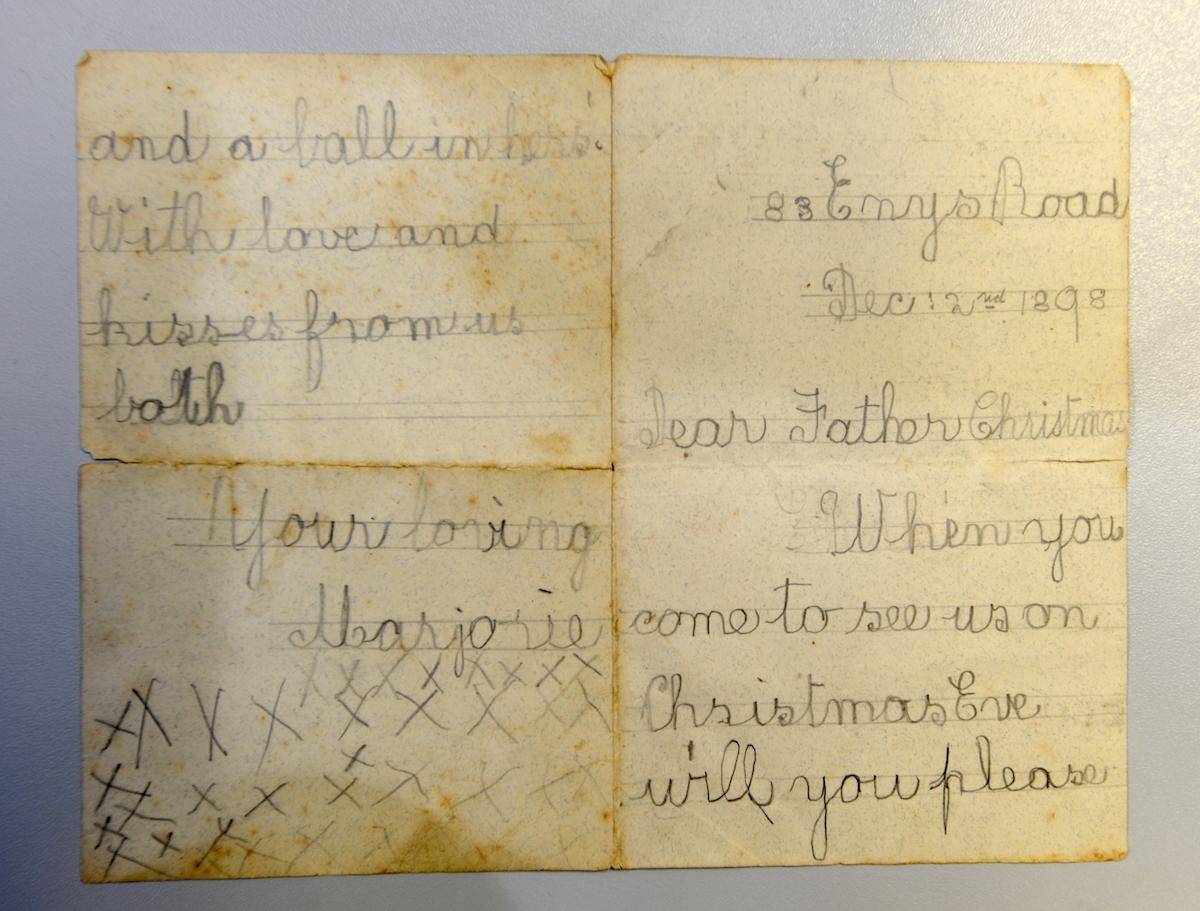 But the family relocated south when her father, the cotton manufacturer and mill owner William T Pennington, died just days after her birth aged only 28.

By the time of the 1901 census, the little girl and her mother Annie, 39, brother Richard, nine, grandmother Amelia Watson, 72, and governess Mary Edmunds, 21, had moved to 83 Enys Road, Eastbourne.

At the time, the property, in a well-to-do area of the East Sussex seaside town, was known as Bellavista and it was there that Marjorie wrote and posted her Christmas note. 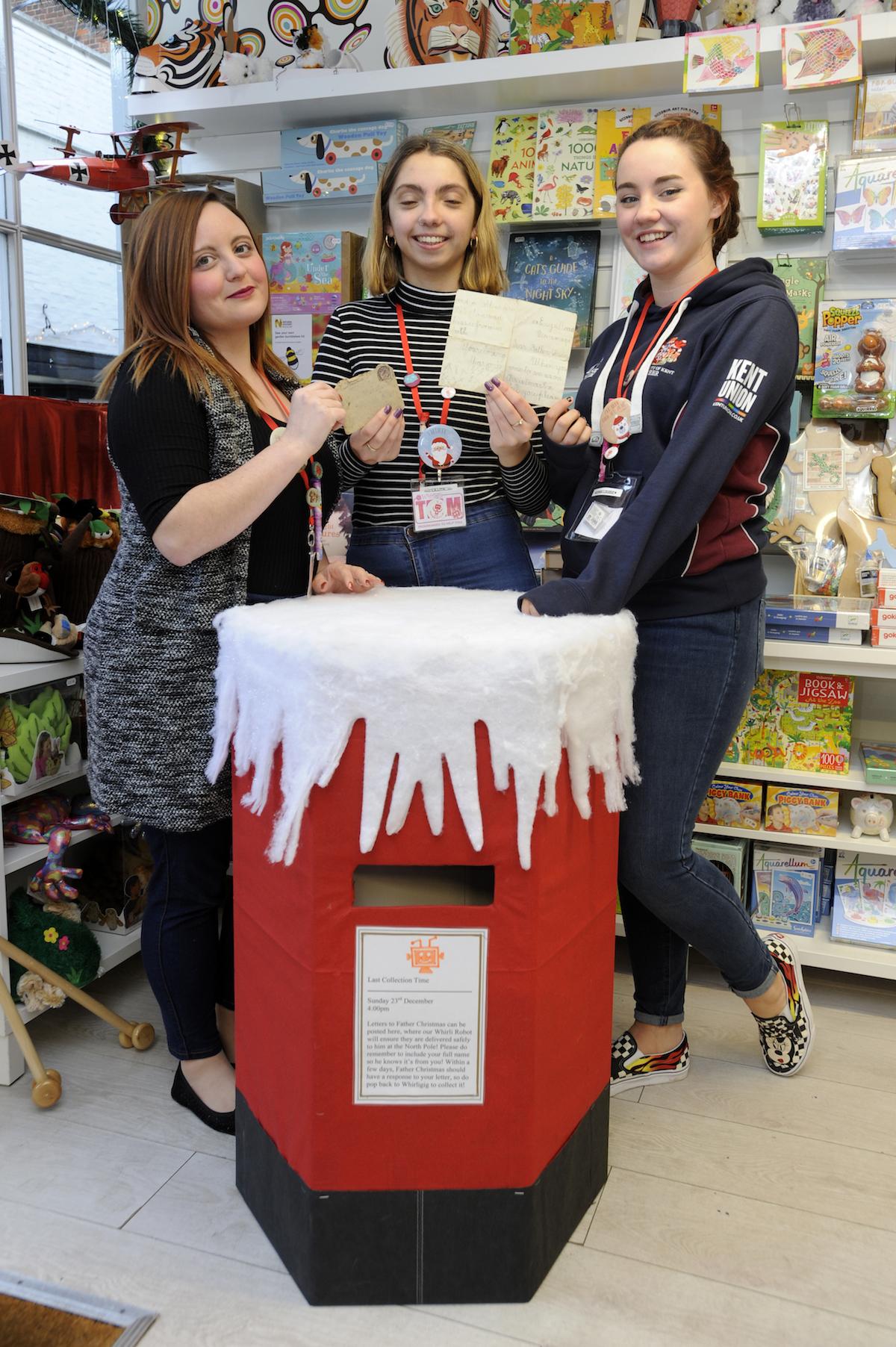 He said: “Enys Road was an upper middle class area. A lot of children around there would have been sent back from the colonies for schooling.

“Letters like that are rare. It’s lovely to see.”

Whirligig’s founder, Peter Allinson, said there wasn’t a single person who had seen the letter who wasn’t moved by its simplicity.

Researcher Alex Cox said: “It’s a truly wonderful letter and there are literally millions of stories just like Marjorie’s that have been lost to history and are still waiting to be told.”