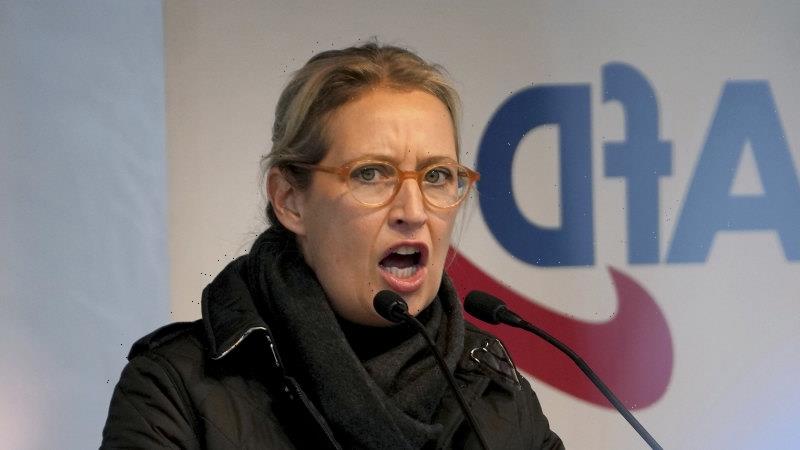 Gorlitz: Flanked by campaign posters promising a return to “normality,” Alice Weidel, a lead election candidate for Germany’s far-right group, railed against coronavirus lockdowns and what she said was “discrimination” against the unvaccinated.

Then she moved on to vaccinations for children. 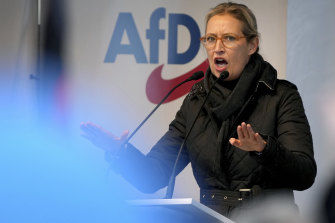 Alice Weidel, co-leader of the Alternative for Germany party. Credit:AP

“Hands off our children,” she said to cheers in Gorlitz, Germany’s most eastern city. The crowd had gathered for one of the last campaign events of the Alternative for Germany party, or AfD, before national elections on Sunday. The vote will set Germany on a new course after 16 years with Angela Merkel as leader.

The anti-lockdown, anti-vaccination mandate message is a new rallying cry for the AfD, which became the country’s third-largest political force when it won 13 per cent of the vote in the country’s last parliamentary elections in 2017.

It did so then by stoking a wave of anti-immigration sentiment in the wake of the migrant crisis after Chancellor Merkel opened the nation’s doors to more than a million refugees, many of whom fled Syria’s deadly civil war.

The AfD hasn’t abandoned its bread-and-butter issues of immigration and integration, which also feature heavily in election speeches. But after initially voicing support for coronavirus measures as the pandemic ravaged Europe, it has now put at the centre of its campaign fighting what it describes as the overbearing rules. 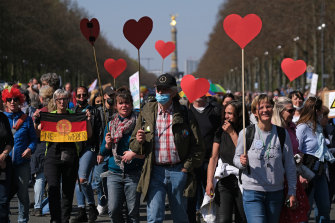 The party is trying to capitalise on Germany’s ecosystem of coronavirus sceptics, and infuse it with a far-right framing of the crisis, said Hans Vorlander, a professor at the Technical University of Dresden. That includes Querdenker, the COVID-sceptic mass movement that encompasses a wide range of followers, including far-right radicals anti-vaccine moms.

“It’s a free-rider,” he said of the AfD. “The AfD realised that there was opposition to the corona restrictions in parts of the population and tried to make itself the leader of the loud and fierce anti-corona protests.”

Analysts say the inflammatory rhetoric risks violence, pointing to the fatal shooting of a young gas station worker in Germany’s west over the weekend, after she requested that a customer wear a mask.

So far the strategy does not seem to be helping the party in the polls. According to the latest from pollsters INSA, the AfD is projected to win just 11 per cent of the vote.

“It’s a lot, but it’s not a danger for democracy,” said Hajo Funke, a German academic who focuses on right-wing extremism. “They will remain completely isolated,” he said of the fact that all other parties have vowed not to co-operate with AfD.

But the picture is different in Germany’s east, including Gorlitz in the state of Saxony, where the AfD is the strongest political force and came close to voting in the party’s first mayor two years ago.

“We can count like this: one, two, AfD,” local Jan Kessens said as he pointed at random passersby from a park bench. “It’s every third person here in this city.”

The party is projected to win around 26 per cent of the vote in Saxony, according to INSA’s polls. That figure is comfortably ahead of Merkel’s Christian Democrats and just one point off its 2017 result. In Gorlitz, the AfD won 33 per cent four years ago.

“There’s no work, nothing to do, no discos, no parties, there’s nothing,” he said.

Nearby, the crowd gathered to watch Weidel and the party’s other lead candidate, Tino Chrupalla. A former painter and decorator, Chrupalla, 46, emerged as one of the AfD’s stars after unseating a member of parliament from the Christian Democrats in 2017.

Sylvia, 55, who had traveled from a nearby town to watch them, said that it was unchecked immigration that had prompted her to switch support from Merkel’s Christian Democrats to the AfD in 2017.

“Then there was also the corona pandemic,” she said, declining to give her last name even as she described herself as “open” about her support for the party.

The AfD is the only party talking about violations of the Grundgesetz, she said, referring to Germany’s Basic Law, the closest thing it has to a constitution. Complaints about perceived violations of the rights it enshrines are fodder for the anti-lockdown movement.

Germany’s decision to do away with free coronavirus testing to put a financial burden on the unvaccinated is “unfair,” she said.

The COVID-sceptic messaging plays well here: Saxony has the lowest vaccination rate of any of Germany’s 16 federal states.

But analysts say the number of receptive ears are limited. And for Frank Klingebiel, the conservative mayor of Salzgitter in Lower Saxony, he’s more concerned that the AfD is the only party addressing issues of integration that he says is still of concern to his electorate.

His city of around 100,000 people had long hosted asylum seekers, including a sizable community of Syrians. But the abrupt influx of more than 6000 people in Salzgitter between 2015 and 2017 overwhelmed schools and social services, he said. And in 2017, support for the AfD surged and it captured 13 per cent of the vote in the city.

“In 2017, I was for the first time in my career worried about social peace in the city,” said Klingebiel. The mayor successfully campaigned German authorities to effectively ban new arrivals from settling in the city and Salzgitter ultimately received additional funding.

Klingebiel said that his goal was not to push Merkel’s conservative party closer to the far-right. He is in favor of more integration support for asylum seekers and worries about the momentum the AfD is experiencing in his city.

The mayor said that he is concerned Germany’s more mainstream parties have moved on – but that many voters haven’t.

In Görlitz, Chrupalla warned the crowd that Germany is facing a new “wave” of immigration, attempting to whip up fear that the Taliban takeover of Afghanistan could send new refugees to Europe. Earlier, a former police superintendent had railed about alleged crimes committed by “new Germans,” he said, or asylum seekers who were granted citizenship.

Petra Müller, 60, says it is the fact that no other parties are willing to talk about problems integrating new migrants that had pushed her to vote for the AfD for the first time with this election.

“I’m not against foreigners, but I don’t find it pleasant anymore,” she said, adding that avoiding the immigration discussion is “not honest and not good for the country.”