Berlin: The far-right Alternative for Germany party (AfD) was designated a suspected extremist threat by German intelligence on Wednesday (Europe-time) and placed under surveillance.

The move comes as other parties and Jewish groups accuse the AfD of fanning the flames of far-right violence and anti-Semitism, and bearing responsibility for a wave of attacks against the Jewish community and migrants.

AfD leaders denounced the decision as “purely political” and aimed at “massively damaging the party, especially in an election year”. 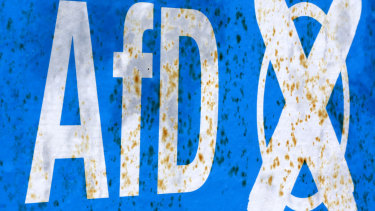 It is the first party in the Bundestag to be designated a suspected extremist threat. The domestic intelligence agency, the Office for the Protection of the Constitution (BfV), was unable to comment on the decision because of continuing legal action, but it was confirmed by intelligence sources.

It means members of the largest opposition party can have their emails and phone conversations monitored and their movements watched. The intelligence services are also authorised to recruit informants from party circles.

But MPs, MEPs and regional politicians will not be subject to surveillance under the terms of an ongoing court case.

The move comes at a turbulent time for the AfD, which in 2017 became the first far-right party to win seats in the German parliament since the 1960s, after campaigning on an openly anti-Islam and anti-migrant platform.

When it became the largest opposition party after the two main parties formed a grand coalition under Angela Merkel, its rise looked unstoppable.

But the AfD’s popularity has fallen sharply in recent months and it looks unlikely to repeat the feat in September’s elections – it is currently fourth in the polls on 9 per cent of the vote.

A failed far-right terror attack on a packed synagogue that killed two people in 2019 proved a turning point. Rival politicians accused the AfD of fomenting an atmosphere of hatred that had inspired the attack and other incidents, including the assassination of a politician known for his support for migrants. 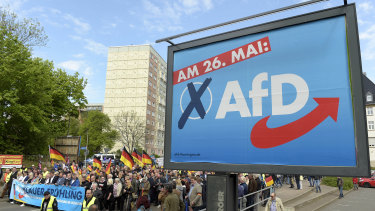 The AfD has since been torn apart by infighting between hardliners and relative moderates.

The decision to place the party under surveillance was welcomed by Josef Schuster, the president of Germany’s Central Council of Jews, who warned of a “a clear line towards radicalisation” within the party.

“With its destructive policies, the AfD is helping to undermine our democratic structures and discredit democracy,” he said.

It was also welcomed by the Christian Social Union, the Bavarian sister party of Merkel’s CDU.

The AfD vowed to fight the decision in the courts.