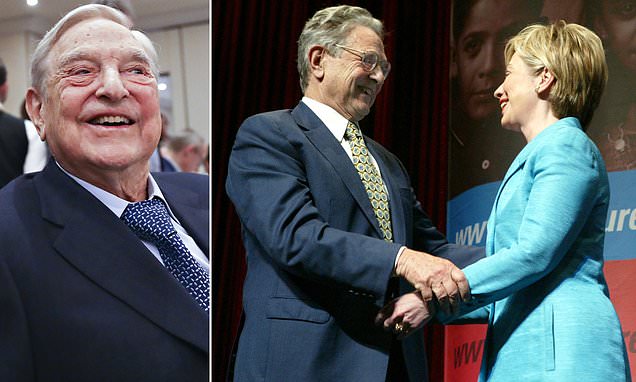 George Soros is named as Financial Times’ Person Of The Year 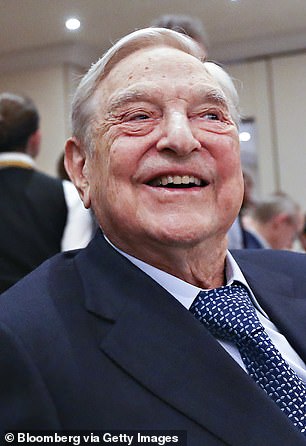 George Soros, seen at the World Economic Forum in Davos on January 25, was described by the FT as a bulwark against rising nationalism and populism

George Soros has been named the Financial Times Person of the Year for being the ‘standard bearer for liberal democracy’ as it comes under siege from ‘Putin’s Russia and Trump’s America’.

The London-based newspaper said it was honouring the billionaire financier not for his achievements but for ‘the values he represents’ in the face of rising ‘nationalism and populism’.

Mr Soros, a major sponsor of the US Democratic Party, is a champion of global liberal causes and has poured thousands into a campaign against Brexit, earning him a controversial status in right-wing circles.

‘I’m blamed for everything, including being the anti-Christ,’ Mr. Soros, 88, told the FT during an interview last week in Marrakesh, Morocco. ‘I wish I didn’t have so many enemies, but I take it as an indication that I must be doing something right.’

Right-wing commentators slated the FT for its decision, with US journalist and TV presenter Bill O’Reilly saying the move was ‘completely insane’ and ‘reflects the worst of the media’.

Raheem Kassam, a former adviser to Nigel Farage when he was leader of the UK Independence Party, branded the award ‘risible’.

Soros, who survived Nazi occupied Hungary as a teenager, was praised by the FT for promoting a ‘liberal vision of the world’ in the face of anti-Semitic conspiracy theories and threats of violence.

The Jewish businessman was one of the first of more than a dozen leading Democrats to be mailed pipe bombs by a Florida-based Trump supporter in October.

The president has regularly aired conspiracy theories about Soros, including that he funded the caravan of Central American migrants that have been trying to enter the US.

‘I have been painted as the devil,’ he said. ‘The fact that extremists are motivated by false conspiracy theories about me to kill hurts me tremendously.’

He has also generated anger among Brexiteers for helping to fund the controversial Best of Britain group, which is fighting for a second EU referendum.

His fortune now stands at $8billion (£6.3billion) – a total depleted by an $18bn (£14.2bn) donation to his philanthropic organisation, the Open Society Foundation. 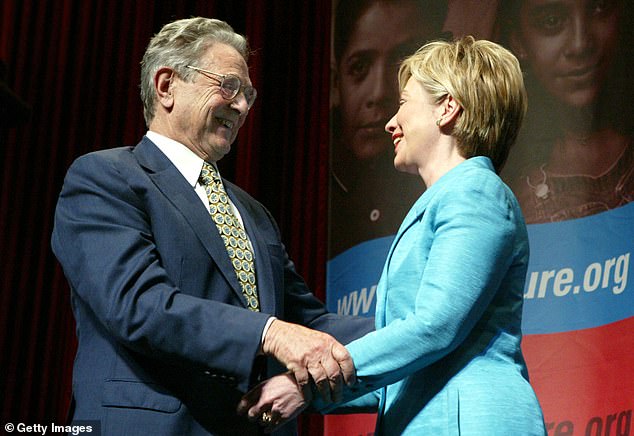 Soros has long been a Democratic supporter and an ally of Hillary Clinton, who he is seen meeting in Washington, DC, on June 3, 2004

Mr Soros was born in Budapest on August 12, 1930, and by the Nazi invasion in 1944 was living a life of middle-class comfort with his father Tivadar, mother Elizabeth, and brother Paul in an idyllic home on Lupa Island in the Danube.

To escape the Gestapo death squads, the young Mr Soros was given the name Kiss Sandor, along with a set of Christian papers. He was then taken in by a man called Baumbach, also known as Baufluss, whom Tivadar paid to protect his son.

Baumbach was an official at the Ministry of Agriculture who had worked with Soros’ father. He was also a Nazi collaborator, and sometimes took the young boy on visitors to write up lists of confiscated property.

This experience, which Soros had no control over, would later lead to inaccurate claims by Vladimir Putin and others that he chose to help the Nazis. Soros managed to survive the rest of the occupation, which cost the lives of 500,000 Hungarian Jews.

Aged 17, Soros fled to London and worked as a porter and waiter before enrolling in the London School of Economics.

He moved to America and became a naturalised citizen in 1956, spending time as a trader before setting up his own hedge fund, Soros Fund Management, in 1969.

A ruthless speculator, in 1992 he became known as ‘The Man Who Broke The Bank Of England’ after he shorted the pound to send Britain crashing out of the ERM. The move earned him a billion dollars in a day.

Some of Soros’ earliest political work was helping pro-democracy groups in the Soviet Union, an action that has gained him the hatred of Putin, who pines for the former USSR.

A key landmark in his political career was the establishment of the Open Society Foundation in 1984.

This has invested money in a wide variety of causes including migration, drugs policy, and the Rohingya crisis in Myanmar.

He has also inserted himself into the polarised world of US politics, earning the ire of Trump by becoming one of the largest donors to Hillary Clinton’s 2016 US presidential campaign.

Among the many slurs issued by the president was that Soros funded protesters to disrupt Brett Kavanagh’s Supreme Court confirmation hearing on October 5. 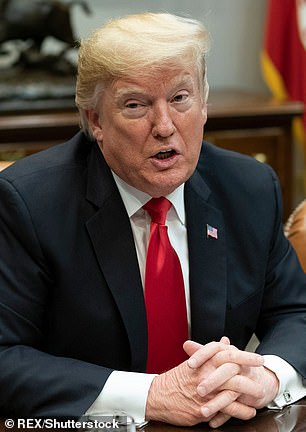 ‘Don’t fall for it! Also, look at all of the professionally made identical signs. Paid for by Soros and others. These are not signs made in the basement from love! #Troublemakers ‘

Later that month, Trump upped the ante by venting a conspiracy theory that Mr Soros was funding the caravan of Honduran migrants to travel to the US border – an issue that became a touch-stone topic during the Midterm Elections.

The Saturday before, a gunman had shot up a synagogue in Pittsburgh, killing 11 worshippers. He didn’t agree with the president’s policies, but his online activity showed him spreading anti-Semitic conspiracy theories about Soros and the caravan.

That same month, Soros was among a dozen Democrats to receive a mailed pipe bomb sent by a Trump supporter, an incident that convinced his son, Alexander, to accuse the president of encouraging violence.

Alexander called the incidents a ‘threat to the future of American democracy’ as he hit out at the president in a New York Times op-ed titled ‘The Hate That Is Consuming Us’.

He argued that while his father has long faced anti-Semitism, ‘something changed in 2016’.

‘Before that, the vitriol he faced was largely confided to the extremist fringes, among white supremacists and nationalists who sought to undermine the very foundations of democracy,’ he wrote.

Yet Soros Snr appears unfazed by the president’s popularity, telling the FT that he would be a passing phenomenon.

He has refused to endorse any candidates for the 2020 Democratic primaries for president and plans to back whoever emerges as the party’s candidate against Trump.

Soros has also been a vocal critic of Facebook, which he called a ‘menace’ to society due to its influence on elections during a speech at Davos in January.

In November, he was accused of shorting Facebook stock by unloading millions of dollars’ worth of shares in the company just before its stock nosedived – saving himself $17.7million in the process.

Last month, the social media giant admitted hiring a PR agency to oversee a smear campaign against the financier, with the company claiming it wanted to see if there was a ‘financial motivation’ behind his attacks. 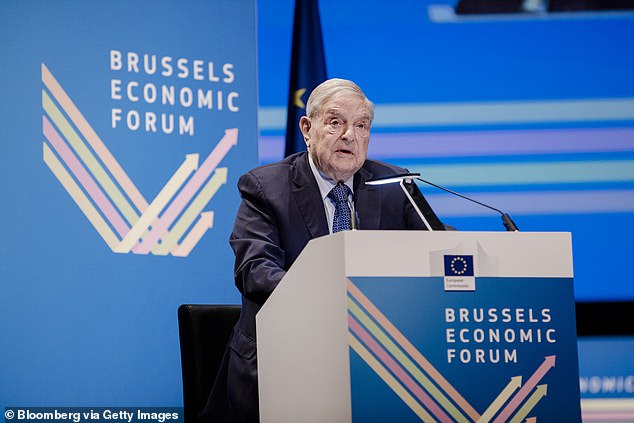 Other Soros targets include Brexiteers, Facebook and Hungarian Prime Minister Victor Orban. He is seen speaking in Brussels in June 1, 2017

The fallout implicated Facebook’s chief operating officer, Cheryl Sandberg, who was forced to admit being involved in the smear campaign despite previously denying this.

Soros has also faced controversy in the UK by ploughing at least £700,000 into Best for Britain, which wants MPs to vote down Theresa May’s deal and stop Brexit.

The news of his involvement riled anti-EU campaigners, including former Cabinet minister Owen Paterson, who accused Soros of a ‘disgusting’ intervention to undermine a popular vote.

Elsewhere, Soros has funded pro-democracy groups in Hungary, where individual rights and freedom of expression have come under strain from the authoritarian regime of Prime Minister Victor Orban.

This week, the premier accused Orban of funding a 2,000-strong protest at the state television building to demand independent public media and courts, a claim which Soros denied.

Last year, Hungary launched a billboard campaign to discredit Soros, with posters showing him smiling against the caption ‘Don’t let Soros have the last laugh.

Soros’ spokesman said the move harked back to ‘Europe’s darkest hours’, while some of the posters were defaced with graffiti reading ‘stinking Jew’.

This Multi-Part Ab Circuit Will Obliterate Your Core