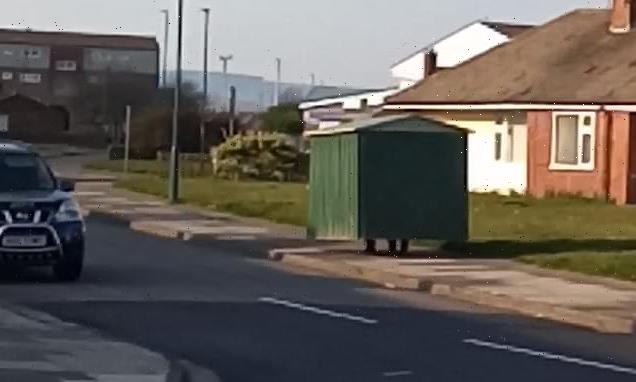 This is the hilarious moment a garden shed was spotted ‘walking’ itself down the street by baffled locals.

Footage shows the metal structure hovering off the ground and shuffling along the pavement before coming to a stop as a car drives past.

Seconds later the shed picks up again before carrying on down the road, with two pairs of legs poking out from underneath.

The clip was recorded on a street in Redcar near Middlesbrough, North Yorkshire.

Andy Power-Tate was sitting in his lounge daughter Charlotte, 29, ‘shrieked with laughter’ at seeing the metal structure appear to move on its own past their window.

When 50-year-old Andy glanced outside he quickly spotted the two people’s legs, saying the ‘bizarre’ sight left the entire family ‘in fits of laughter’.

The actor said he watched for ten minutes and his comedy partner and son-in-law 28-year-old Gareth Arthurs later recorded a David Attenborough-style voice over for the clip, claiming it was two men trying to get to a pub without being seen.

The father-of-four later shared the funny clip on Facebook where it amassed more than 1,900 likes, comments and shares 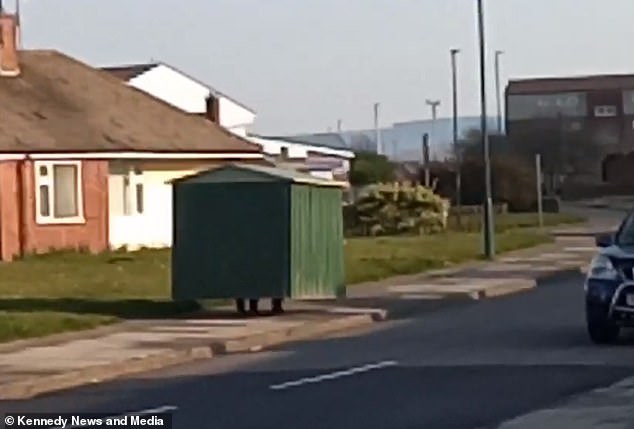 Baffled locals spotted a garden shed ‘walking’ itself down a street in Redcar near Middlesbrough, North Yorkshire

‘We were sitting in the lounge and my eldest daughter shrieked with laughter for no apparent reason – it made me jump,’ said Andy.

‘I was looking at her and said “what’s the matter?” and she was just pointing because she can’t speak because she’s laughing.

‘I look out the window and the shed is just popping past the window – I’ve never seen anything like that before it was very bizarre.

‘It was hilarious and I watched for about ten minutes – it took some doing and it must have been quite heavy because they weren’t rushing with it and they kept stopping every couple of feet. 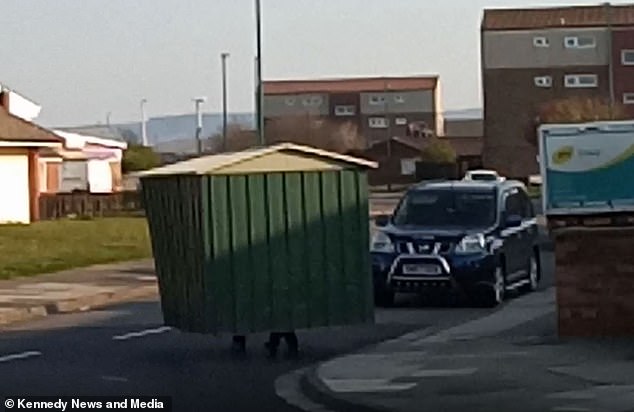 When 50-year-old Andy Power-Tate glanced out his window he quickly spotted the two people’s legs, saying the ‘bizarre’ sight left the entire family ‘in fits of laughter’

‘When they were crossing the road I thought they were going to trip over the pavement or something.’

The father-of-four said that at first glance he thought it must have been BT workmen working underground because the moving object was stationary above a manhole cover.

Andy said: ‘At first I thought that must have been what they were doing – I thought “oh, they’re just going to work on it”.

‘Then I saw it move again and that’s when I obviously started to laugh and took my camera outside and thought “I’m going to capture this because this is quite amusing”. 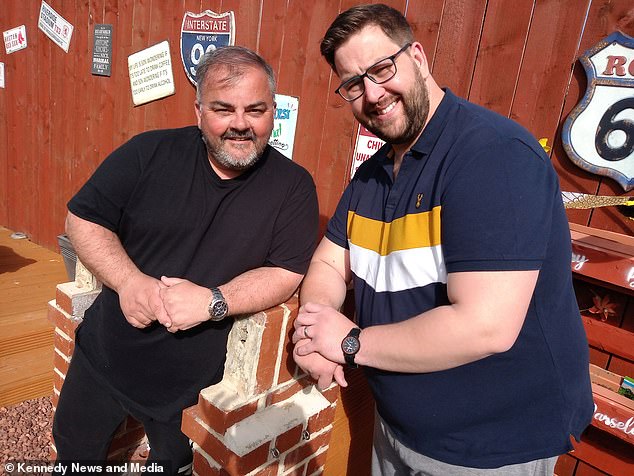 Andy Power-Tate, 50, and son-in-law 28-year-old Gareth Arthurs recorded a David Attenborough-style voice over of the bizarre sight, claiming it was ‘two men trying to get to a pub without being seen’

‘They [family] just laughed – they were all in fits of laughter and I think you can hear them in the background on the very first video – they were finding it quite amusing.

‘What I’ve gathered since [from Facebook] is that they picked the shed up from somebody else’s garden and took it up to an allotment which is just up from our home, probably about a mile or so.

‘And instead of getting a truck or a van they’ve decided they’ll just get inside it and move it.’

The clip was shared on social media and was inundated with comments from tickled users.

When does Jupiter enter Pisces? What it means for YOUR star sign
World News