‘Game changer’: US says scientists have made breakthrough in nuclear fusion energy

Washington: Scientists in California have made a key breakthrough in nuclear fusion, a technology with the potential to transform the global energy landscape.

Researchers at the US Department of Energy’s Lawrence Livermore National Laboratory near San Francisco were able to produce a fusion reaction that generated more energy than it consumed, according to a person familiar with the research who requested anonymity to discuss results that have not yet been fully disclosed in public. 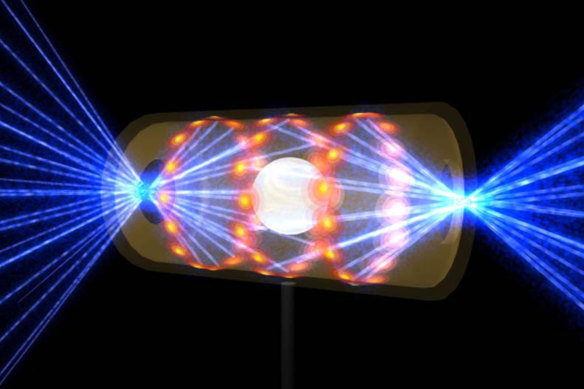 A target pellet inside a hohlraum capsule with laser beams entering through openings on either end. The beams compress and heat the target to the necessary conditions for nuclear fusion to occur.Credit:AP

Fusion is the same process that powers stars and the achievement is a major milestone that shows it may eventually be possible to tame the energy of the sun to create a commercial power plant on Earth. Though that is still many years away, the technology offers the promise of abundant carbon-free electricity.

In the experiment, lasers were used to bombard hydrogen isotopes held in a superheated plasma state in order to fuse them into helium, releasing a neutron and carbon-free energy in the process.

The breakthrough “could be a game changer for the world,” said Representative Ted Lieu, a California Democrat.

Scientists have been experimenting with the technology for decades, but tests typically require enormous amounts of power. Generating a fusion reaction that puts out more energy than it consumes — technically called a net-energy gain — has been elusive.

The reaction produced about 2.5 megajoules of energy compared to the 2.1 megajoules used to power the lasers, according to the Financial Times, which earlier reported the results.

The technology has drawn billions in investments from backers including Jeff Bezos, Bill Gates and Peter Thiel. In recent years, it also started to win support from sovereign wealth funds, national development banks and venture capitalists, a sign that the industry is starting to look more seriously at the concept.

A spokeswoman for the Lawrence Livermore National Laboratory said the analysis was still ongoing and it would share more details on Tuesday (US time).

The technology is different from fission, which is now widely used in commercial nuclear power plants. Fission creates energy by splitting atoms, but also produces radioactive waste. It has been commercially available for decades and still produces only 10 per cent of the world’s power, far less than coal and gas.

Fusion’s potential market share would also be challenged by solar and wind power, both of which are cheaper and have mature supply chains. Their main drawback — intermittent generation — is being addressed by a rapidly growing battery storage industry.

Still, if fusion can be scaled up, it offers the promise of around-the-clock clean power with less risk and hazardous waste than fission.

The Energy Department previously said Secretary Jennifer Granholm planned on Tuesday to announce a “major scientific breakthrough” at the national laboratory by researchers with the agency’s National Nuclear Security Administration.

Inside the mansion Harry & Meghan used for Netflix doc with orchards, secret garden and even a chicken coop
World News