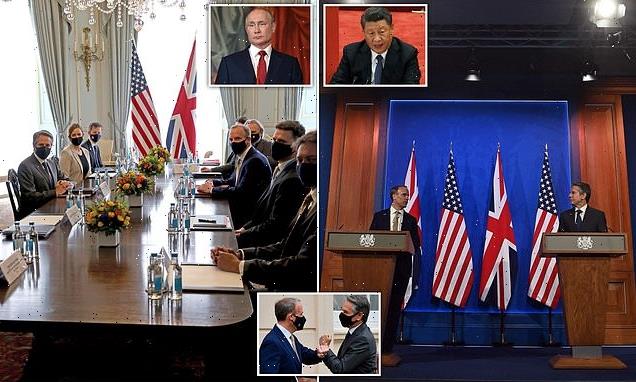 G7 leaders will discuss 'rising threats' from China and Russia

Foreign ministers from all of the G7 nations are today set to meet for their first face-to-face talks in more than two years.

The ministers will meet in London, where they will discuss urgent joined-up action to tackle the most pressing global threats.

China, Myanmar, Libya, Syria and Russia are all on the formal agenda for the G7 group.

The group is made up of the world’s seven largest so-called advanced economies – the UK, Canada, France, Germany, Italy, Japan and the United States.

The ministers will also discuss violence in Ethiopia, Iran and North Korea, Somalia, the Sahel and western Balkans, as part of what London said were ‘pressing geopolitical issues that threaten to undermine democracy, freedoms and human rights’.

It comes as ministers from the club of wealthy democracies prepare for a leaders’ meeting in Cornwall, southwest England, next month.

Britain’s Foreign Secretary Dominic Raab met his US counterpart Secretary of State Antony Blinken on Monday with both pushing a firm line on the need for a more unified approach. 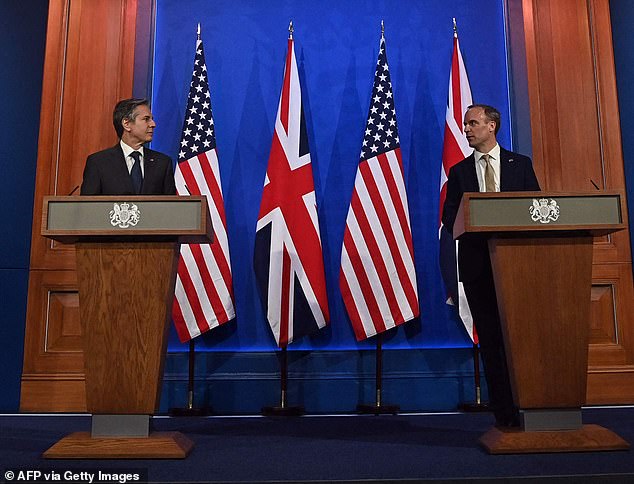 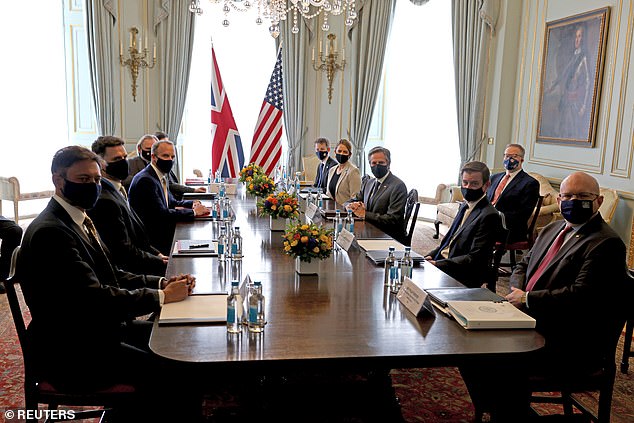 The ministers will meet in London, where they will discuss urgent joined-up action to tackle the most pressing global threats 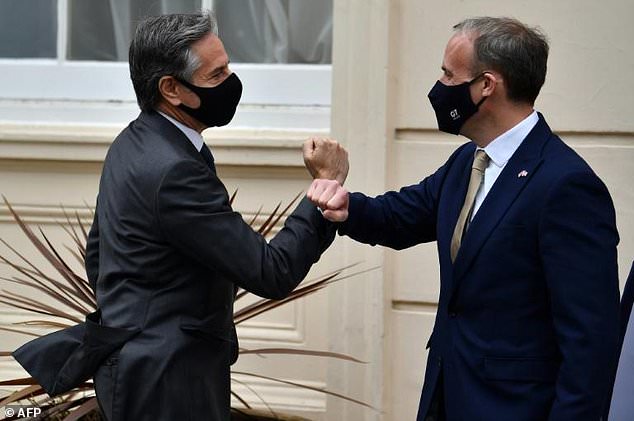 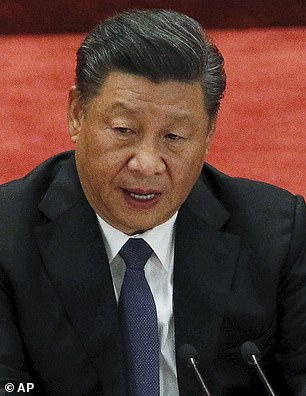 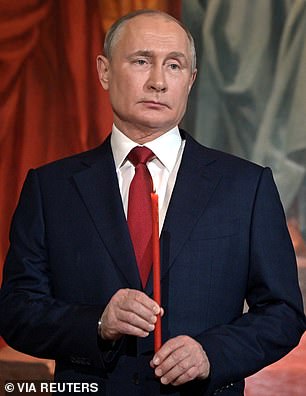 More than 6,000 jobs will be created by a £1billion trade and investment deal with India, Boris Johnson announced yesterday.

This includes £240million from the Serum Institute of India to support clinical trials, research and potential vaccine production.

No 10 also said UK businesses had secured export deals worth more than £446million, expected to create more than 400 jobs.

Mr Johnson said: ‘Each and every one of the more than 6,500 jobs announced today will help families and communities build back from coronavirus and boost the British and Indian economies.’

A future free trade deal would ‘double the value of our trading partnership with India’ in the next decade, he added. He spoke as Foreign Secretary Dominic Raab said the UK and Japan had agreed the basis for deeper trade and security cooperation.

The Prime Minister will attend a virtual meeting with his Indian counterpart Narendra Modi on Tuesday, after he was forced to cancel his planned visit to Delhi due to the country’s worsening coronavirus situation.

During the virtual talks, the two leaders are expected to agree an enhanced trade partnership, which Number 10 said will pave the way for a future UK-India free trade agreement.

‘The UK’s presidency of the G7 is an opportunity to bring together open, democratic societies and demonstrate unity at a time when it is much needed to tackle shared challenges and rising threats,’ Raab said in a statement.

Blinken hammered home the need for a common stance, as he reaffirmed US commitment to the ‘international rules-based order’ to tackle issues from climate change to post-pandemic recovery.

Ministers are meeting under strict coronavirus protocols, with stripped-back delegations and social distancing, including face-masks and perspex screens between speakers.

Britain, which has seen more than 127,500 deaths in the outbreak, is gradually easing virus restrictions as vaccinations increase and cases fall, even as other countries such as India and Brazil endure fresh spikes.

That has prompted calls for more concerted international action, including widespread access to vaccines.

‘There is I think a stronger imperative than at any time since I’ve been involved in these issues to find ways for countries to cooperate, to coordinate, to collaborate.’

Ministers from the G7 will also meet counterparts from the European Union, as well as delegates from India, Australia, South Africa, South Korea and ASEAN chair Brunei.

Raab said their attendance was proof of ‘the increasing demand and need for agile clusters of like-minded countries that share the same values and want to protect the multilateral system’.

Britain, which left the EU last year, is looking to Asia-Pacific countries for new trade and investment opportunities, but also as a reflection of the region’s growing strategic importance.

It wants wider, stronger global commitments on tackling climate change, as it prepares to host the UN climate change summit, COP26, in November. 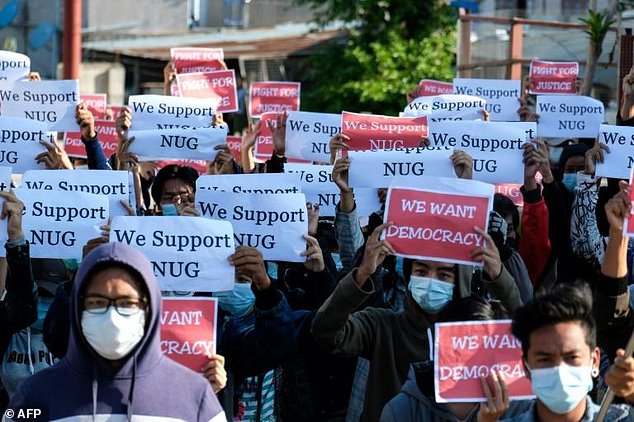 China, Myanmar, Libya, Syria and Russia are all on the formal agenda as G7 ministers prepare for a leaders’ meeting in Cornwall, southwest 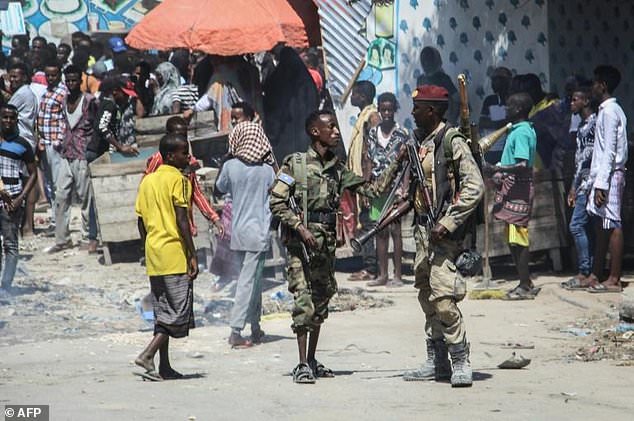 Close allies Britain and the United States have been increasingly aligned in foreign policy towards geopolitical threats, particularly from Russia and China.

Blinken heads Wednesday to Ukraine, where there is Western concern about Russia’s build-up of forces on the border, Moscow’s treatment of opposition leader Alexei Navalny, and Belarus.

On North Korea, Blinken said the ball was in Pyongyang’s court if it wanted to engage diplomatically with Washington’s new approach to address the hermit nation’s nuclear ambitions.

On China, which has been accused of repressing its minority Uyghur population and cracking down on rights in Hong Kong, and Russia, Raab said the ‘door was open’ to better ties.

‘But it depends on behaviour and deeds,’ he said.

On Myanmar, ministers will discuss the February 1 coup and receive a situation report, with Raab expected to urge partners to take tougher action against the military junta, including expanded targeted sanctions.